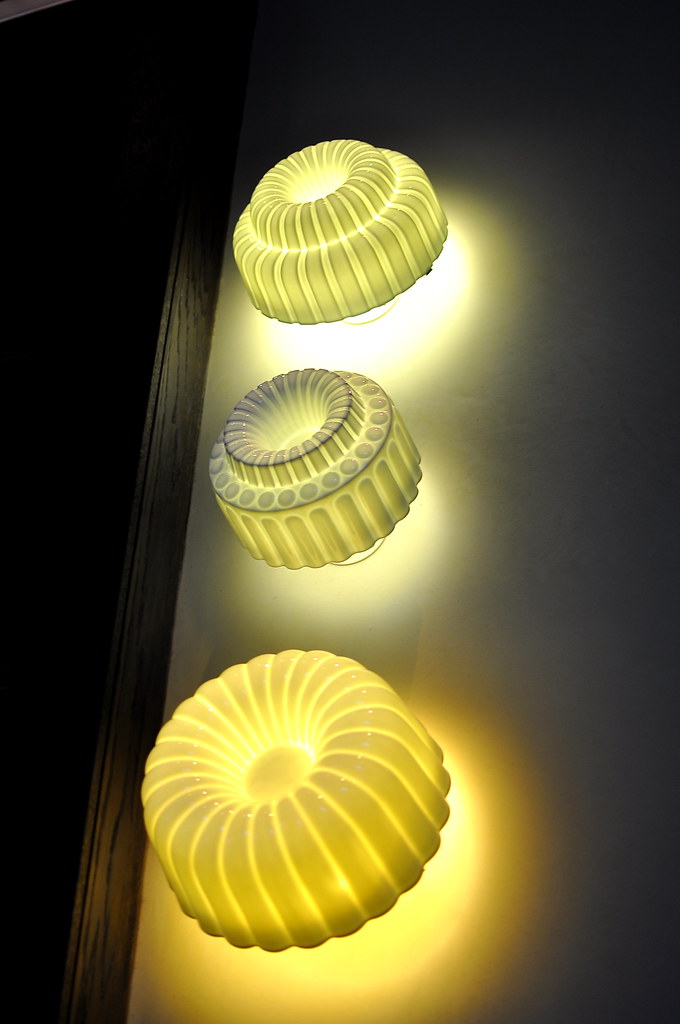 For the grand finale of our whirlwind stopover in London, we dined at Dinner by Heston Blumenthal. Opened in early 2011, the restaurant has already earned a Michelin star and is currently ranked 9th on The World’s 50 Best Restaurants list.

Stars and rankings are all good and fun, but what really drew me in to Dinner was its unique menu of historically inspired British dishes. Every plate served here has been thoroughly researched and can be traced back as far as the 14th century. Dinner is Heston Blumenthal’s love letter to Britain’s proud culinary past, one that continues to influence and inform this modern kitchen at every turn. 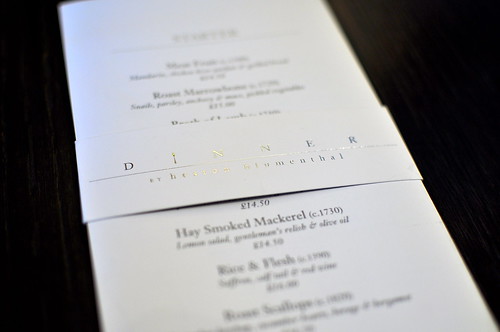 Upon being seated, each member of our party was presented with a neatly folded menu containing the night’s offerings. One side of the menu listed the starters, mains, and desserts, while the other contained the dishes’ “sources of origin” (i.e. the name of the cookbook in which the dish was found). The nerd in me loved how the menu read like an academic paper. 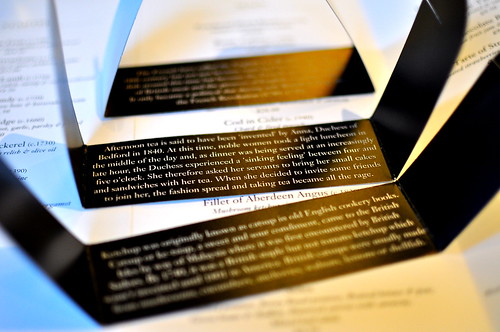 To further set the mood, the clasps holding the menus together contained anecdotes about British gastronomy. I particularly loved the one about the origin of afternoon tea. To think, the tradition began with a duchess and the “sinking feeling” she endured between lunch and dinner! 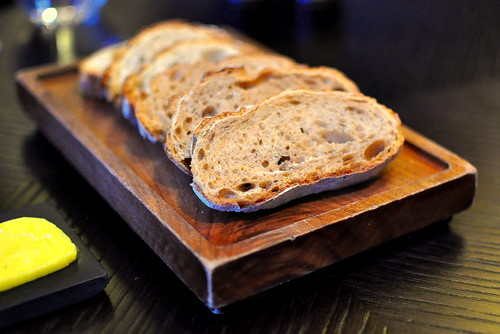 With the exception of the Chef’s Table, ordering a la carte is the only option at Dinner during dinnertime. After poring over each menu item and asking plenty of questions, we finally settled on three starters and three mains. Bread and salt-sprinkled butter kept us company before the appetizers arrived. 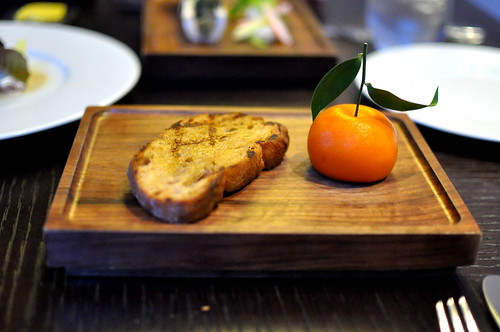 “Meat Fruit” (£15) has emerged as Dinner’s signature dish for good reason—it is as fabulous to eat as it is to behold. Dipped in a  paprika-tinged gelatin mixture at precisely 27 degrees Celsius, the chicken liver parfait looked identical to a mandarin orange. From the stem to the leaves to dimples on the peel, every detail was spot on. 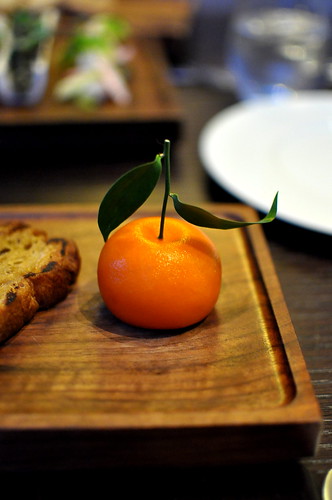 While the chicken liver parfait looked like a piece of citrus, it tasted like the silkiest foie gras torchon ever, with the faintest trace of orange. How the kitchen transformed chicken livers into foie gras is a mystery to me, but damn, we were all thoroughly impressed. More bread, please. 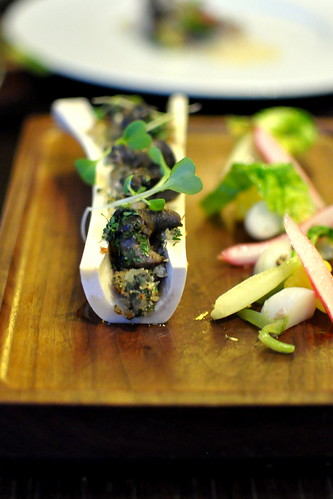 While the wow factor of the Meat Fruit couldn’t be matched, the two other starters held their own. The Roast Marrowbone (£15.50), marrow combined with herbs and panko, was served with snails perched on top and pickled vegetables on the side. Snails and marrow might seem like an unlikely pairing, but the flavors gelled just right. 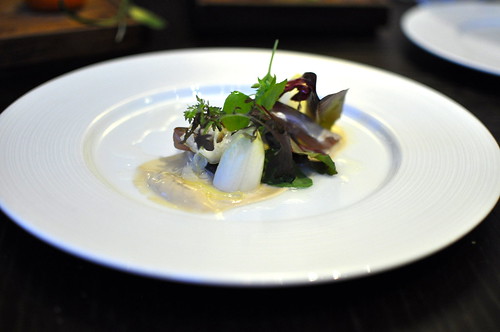 The Hay Smoked Mackerel (£14.50) with lemon salad, olive oil, and gentleman’s relish (a sauce of anchovies, butter, herbs, and spices) was the lightest of the trio but boldly flavored like the rest. Swept up in the umami-laced relish, the supple filets shimmied on our tongues. 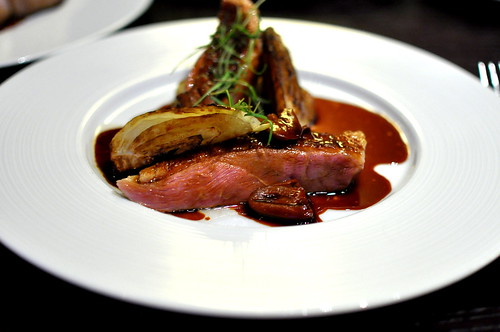 All three appetizers hit it out of the ballpark, and we were hoping for more of the same magic with the main courses. The Powdered Duck Breast (£30) with smoked confit fennel and umbles (offals) came through like a champ.

“Powdered” referred to the brining and salting process that the meat underwent for five hours, which resulted in a succulent slab of breast meat with crispy, lacquered skin. Duck hearts provided the plate’s finishing touches. 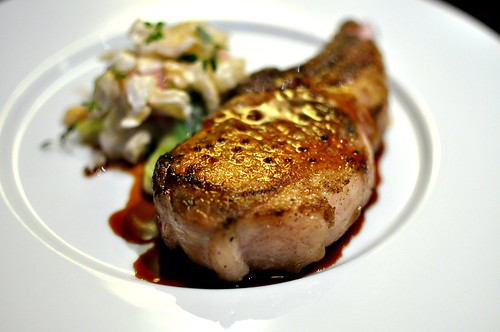 The hits kept on coming with the Black Foot Pork Chop (£30). While black Iberian pigs are best known for their luscious hams, Dinner’s preparation was equally delectable and easily the finest pork chop to ever pass these lips. According to our waiter, the chop was sous vide for just five minutes before meeting a hot sear. The meat’s unparallelled marbling, coupled with the kitchen’s precise cooking, yielded an intensely juicy and flavorful chop.

To accompany the world’s greatest pork chop was Robert sauce (a brown mustard sauce) and a warm Hispi cabbage slaw with lardo and ham hock. 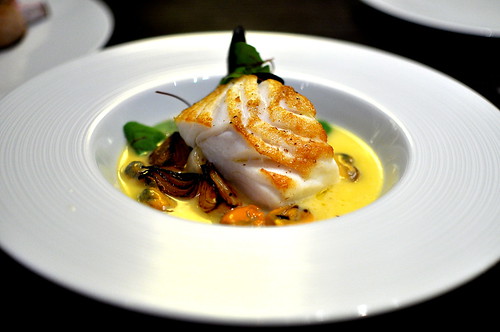 Our final main course was the Cod in Cider (£27) with chard and fired mussels. The recipe for this dish dates back to 1940, making it one of the more modern preparations that we experienced on this night. The cod was cooked perfectly, flaky and tender in all the right places, and provided a swell contrast to the chop and duck since we shared all three dishes family style. It’s how we do, even in the fanciest of situations. 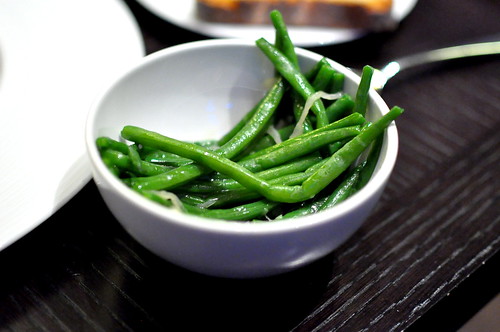 Mothers have a way of coercing their children into eating vegetables, and mine is no exception. A side order of green beans and shallots (£5) joined the lineup to ensure that The Astronomer and I ingested some vitamins and nutrients during the meal. 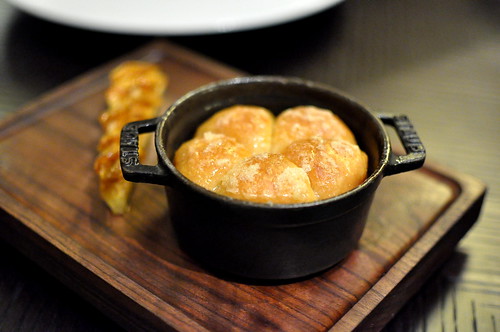 We concluded our dinner with two fabulous desserts. The Tipsy Cake (£12) was served hot out of the oven with a sticky spear of spit roast pineapple on the side. 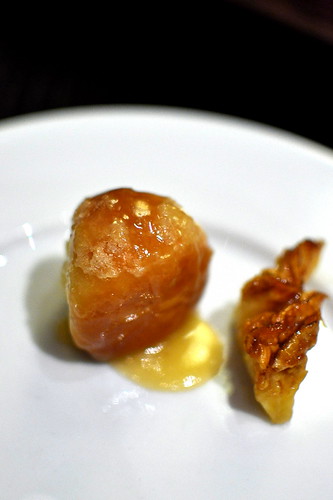 Tipsy Cake, which is traditionally made using old bread soaked in sherry and brandy, according to our waiter, was updated just a touch at Dinner. The version served here tasted like it was baked to order; each tuft was light and pillowy like the dreamiest doughnut hole ever. The tart bites of pineapple reeled in the boozy sweetness. 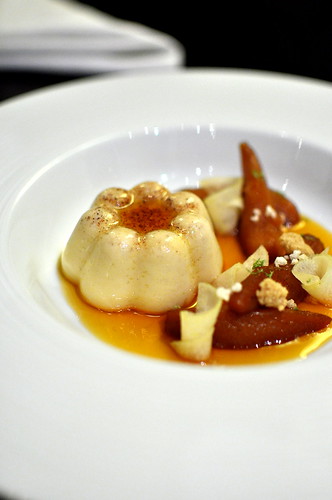 After admiring the custom-made porcelain wall sconces in the shape of antique jelly molds all evening (pictured at top), we could not resist ordering the Quaking Pudding (£10). True to its name, the pudding quivered as it landed on the table. We made it dance a few more times for good measure. Stewed pears swimming in a light caramel sauce and zested with lime were lovely accompaniments. 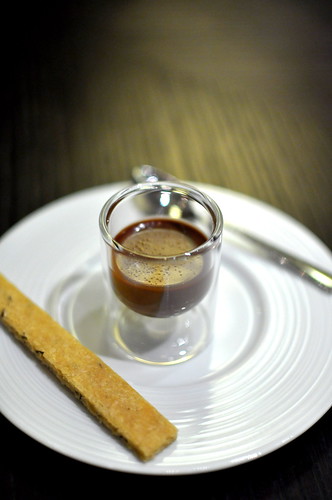 And finally, a complimentary dessert of chocolate ganache with orange blossom. On the side was a caraway biscuit, which I used to deliver the chocolate to my mouth, bypassing the spoon completely.

While a fantastic meal can easily satisfy my body, it’s rare that it satisfies my mind too. Dinner, with its menu deeply rooted in British culture and history, really gave me something to chew on both during and after my meal. Mostly, it made me wonder where some of my favorite foods originated and how they’ve evolved over time. Heston Blumenthal is on to something great here, and I hope it sparks a larger trend in historical cuisine. At Dinner, what’s old is new again, and without a doubt, it’s unbelievably exciting.