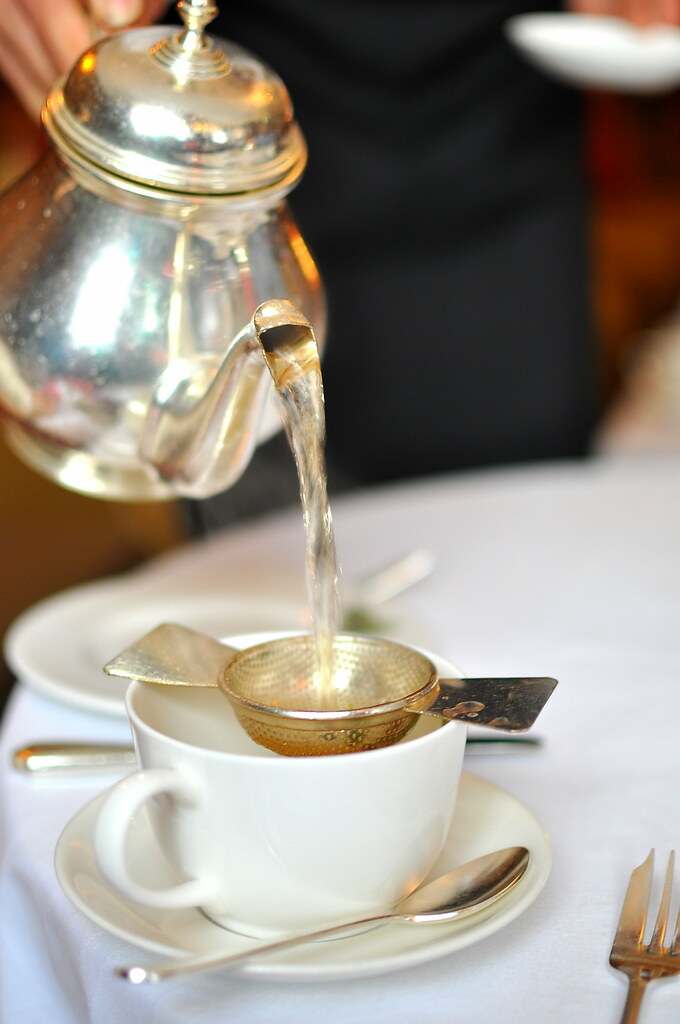 Sitting down for a proper afternoon tea was a must-do on my first trip to London. While I was trying to decide between tea at The Ritz or Claridge’s, my friend and former London resident Simon stepped in and insisted on Brown’s Hotel, which was voted “Top London Afternoon Tea” by The Tea Guild a few years back. Reservations were immediately made and anticipated. Upon our arrival, my mom, The Astronomer, and I were seated at a cushy table by the window in the sprawling “English Tea Room.” A pianist filled the space with lovely arrangements of mostly familiar songs.

Tea is served everyday during the hours between lunch and dinner. Brown’s offers a variety of options, including Champagne Afternoon Tea and a lightened “Tea Tox” Afternoon Tea. We chose the traditional set (£39.50), which included all the trimmings and a few special touches. Our teas were served in an antique silver tea service. A silver pot of hot water was also brought to the table so that we could refresh our teapots when needed to keep the teas from getting too strong.

Mom sipped a fragrant jasmine tea, while The Astronomer indulged in a fruity infusion that smelled like Hawaiian Punch but tasted like regular tea. I had the Nilgiri tea, which boasted hints of malt, caramel, and orange peel. Our three-tiered tower included finger sandwiches, fruit and plain scones, and an assortment of pastries. Everything was replenished as often as we desired without any judgement or fuss, which made this the classiest all-you-can-eat situation ever. The petite scones, lightly sweetened and oh so flaky, tasted terrific on their own and even better with the classic accompaniments: clotted cream and strawberry preserve. The clotted cream was tremendously thick and rich, while the strawberry preserves contained big hunks of fruit. Both were slathered generously on our endless supply of scones. By the time we reached the pastry portion of tea, gustatory real estate was at minimum. Still, we found room to fit in a slice of Battenburg cake (a checker-patterned sponge cake covered in marzipan), a raspberry macaron, a fruit tart, a flower-topped cupcake, and a shot glass filled with white wine gelee and macerated strawberries.

Mom was smitten with the shot glass number and requested a second round. The kitchen also sent out a special birthday fruit tart for my mom, which arrived accompanied by a few notes of “Happy Birthday…” on the piano.  You should’ve seen my mom’s smile. And finally, a trolley filled with cakes was pushed our way. …as well as a royally decadent chocolate layer cake. Now, that’s what I call a cherry on top

Afternoon tea at Brown’s was a lavish, formal, and thoroughly fun affair. Even though it cost a pretty pound to experience this very British tradition, our trip to London would not have been complete without it.

There are few hours in life more agreeable than the hour dedicated to the ceremony known as afternoon tea. – Henry James, The Portrait of a Lady