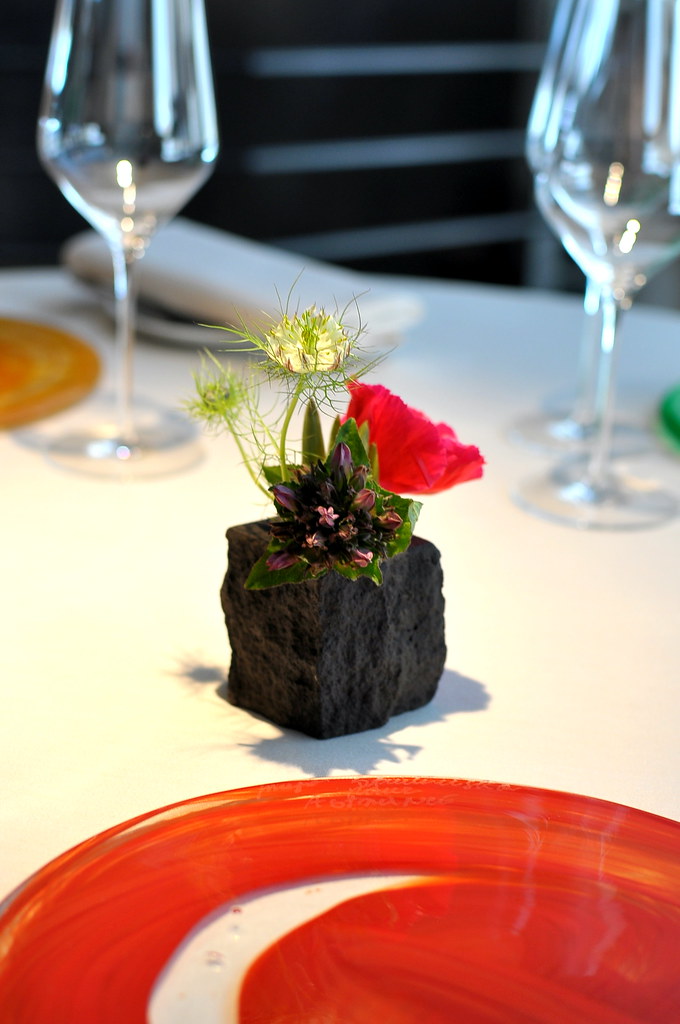 The Astronomer turned 28 years young while in Paris, so we celebrated in high style at L’Astrance. Pascal Barbot and Christophe Rohat opened the restaurant in 2000 after leaving their posts as sous chef and front-of-the-house manager, respectively, at Alain Passard’s l’Arpège. L’Astrance earned its first Michelin star within five months of opening; the second star was awarded a year later and the third in 2007.

Three-star establishments are something of a mixed bag for me. While the food is generally memorable, service can be stiff to the point of unpleasantness. Fortunately, our experience at L’Astrance was not marred by suited gents too serious for their own good. Our amiable British waiter had a way about him that put us at ease and allowed us to focus squarely on the food. After all, that’s what we in came for. 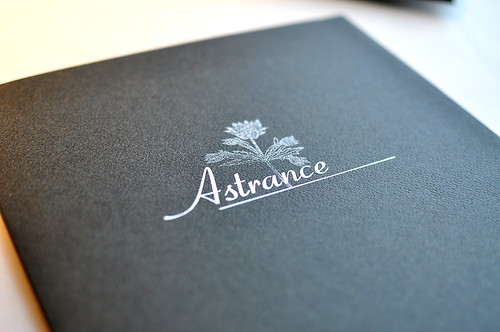 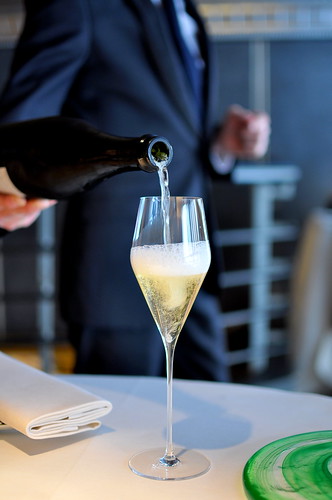 Champagne was in order since we were celebrating The Astronomer’s birthday and our first truly fancy Parisian feast. 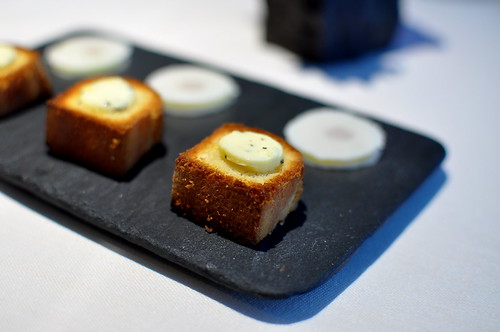 To start we were served two amuses. The first was a rosemary butter-topped brioche, while the second was a thin slice of apple sandwiched between paper-thin almond pralines. 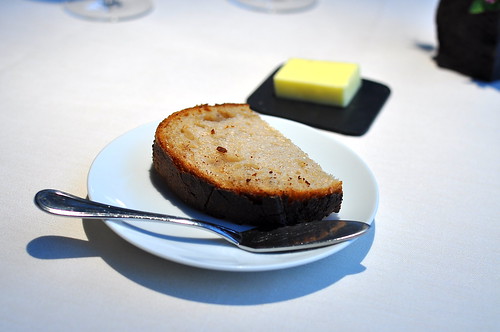 The bread, which is outsourced from boulanger extraordinaire Jean-Luc Poujauran, had a crunchy, lightly charred crust with wonderfully fluffy innards. The raw milk butter served alongside was made to be slathered on generously. I cannot emphasize enough how incredible the bread and butter are in France. 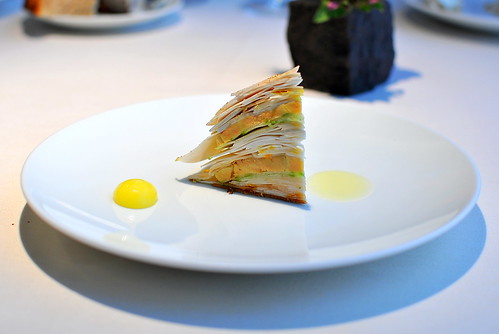 The first official course was Chef’s signature dish, a foie gras and French mushroom galette. Here, thin slices of mushrooms and green apple were layered neatly with cuts of raw foie gras. In its natural state, the liver had a rich mouthfeel not unlike butter. On the side was a bit of hazelnut oil and preserved lemon curd. Dishes in which foie gras are featured front and center can rarely be described as light, fresh, and bouncy, but this one truly was.

Interestingly, Los Angeles chef Ludo Lefebvre served a riff of this dish back in 2009 for LudoBites 2.0. I wish I had known at the time that Chef Barbot and L’Astrance were his sources of inspiration. 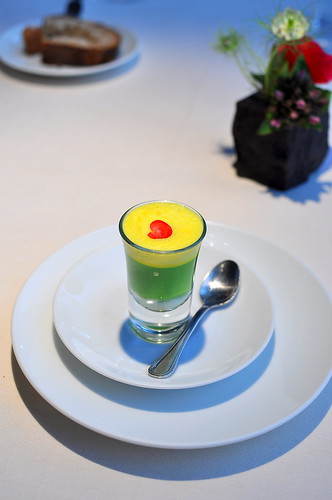 We were served two small bites in between the first and second courses. The first, which was served in a shot glass, was comprised of three distinct layers. On the bottom was ginger yogurt, center was pea soup, and on top saffron and cardamom foam. I tried to include a little of each color with every spoonful. While the three layers muddled into one in my mouth, the individual flavors shined through miraculously. 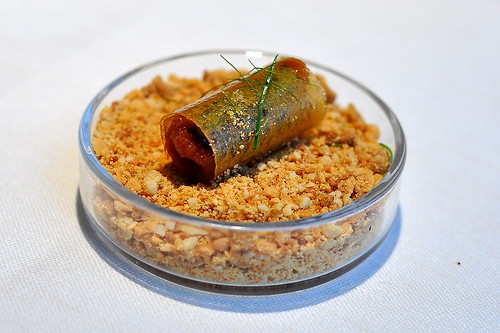 The second small bite was a “spring roll” served on a bed of crushed peanuts. Inside the roll was a sticky satay sauce with a lingering spice. I loved how the wrapper shattered in my mouth. 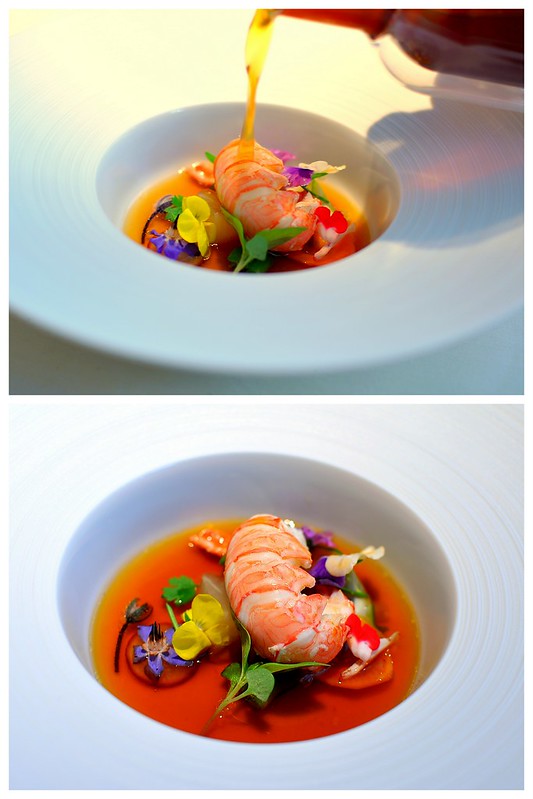 Chef Barbot’s cooking is often inflected with Asian elements, as seen in this langoustine preparation. The snappy tail was served in a beautiful, well-balanced broth made of soy sauce, ginger, and garlic. Along for the ride were edible flowers, cabbage, snap peas, and daikon. This one was a delight. 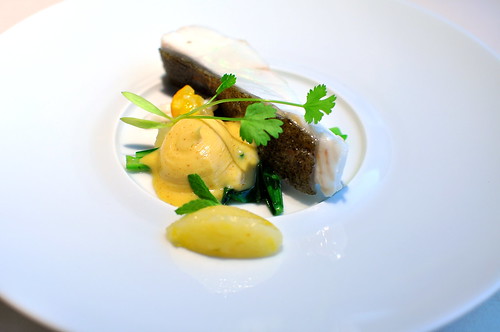 It’s rare that my mom, The Astronomer, and I can unanimously agree on a favorite dish, but the turbot had us nodding our heads in unison. It was the absolute highlight of the meal. From the supple flesh to the crispy skin to the accompanying miso butter and pear compote, every element was perfect and had its proper place on the plate. I still think about that miso butter to this day… 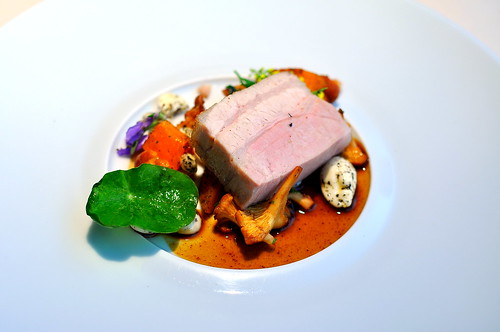 The difficult task of following everyone’s favorite course was handled with aplomb by the pork belly confit, which was served with chanterelles, raw almonds, and apricots. While the meat was moist as can be, we all yearned for some textural contrast from either crispy skin or streaky fat. The most interesting component on the plate was the raw almonds, which tasted like amaretto-laced water chestnuts. 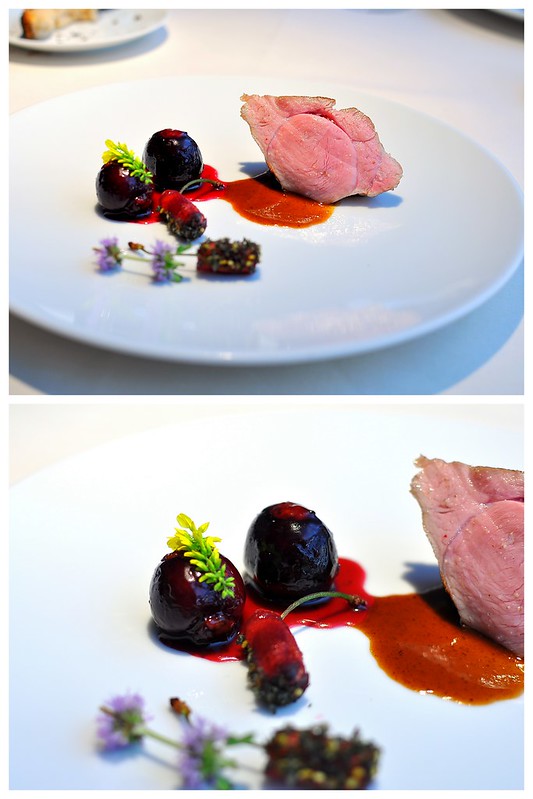 The final savory course had us once again nodding our heads in unison. Impossibly juicy hunks of lamb were garnished with dazzling prune- and nut-stuffed cherries. Rather than tossing the cherries’ pits into the bin, the kitchen coated them in thyme, giving diners something extra to nibble on. Goodness gracious this course rocked. 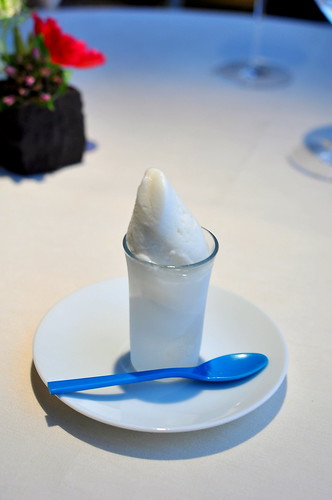 In addition to the foie gras and mushroom galette, Chef is known for his ginger, chili pepper, and lemongrass sorbet. We were all impressed by the sorbet’s legitimate spiciness. 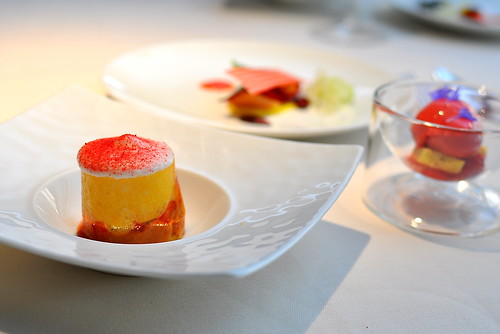 The dessert course was actually three courses in one… 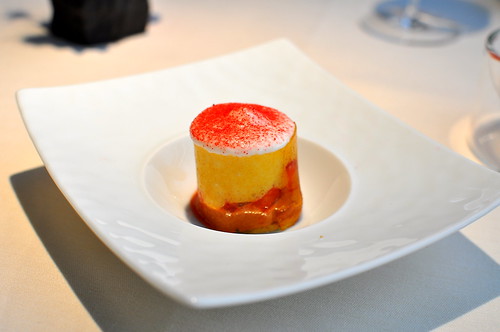 First was a strawberry shortcake with a candied crust and foamy topping. 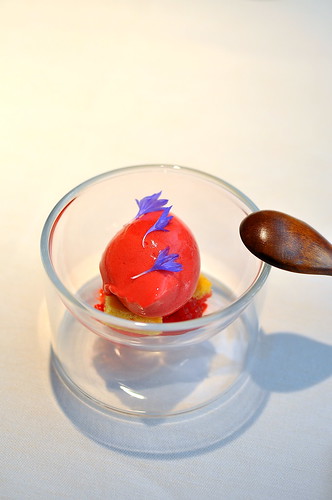 A smooth and refreshing raspberry sorbet with shortbread came second. 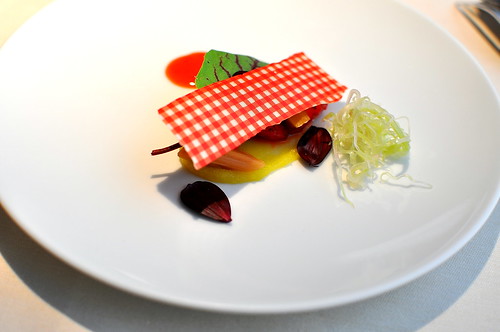 And third were macerated rhubarb and white strawberries with sorrel and ginger, underneath a checked shroud of white chocolate. This celebration of summertime berries could not have been any more perfect for my berrying-loving Astronomer. What a serendipitous birthday gift. 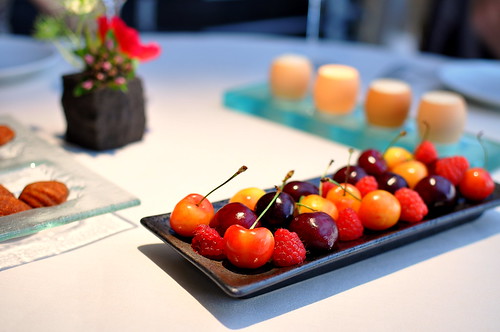 A trio of mignardise followed the extensive dessert course. 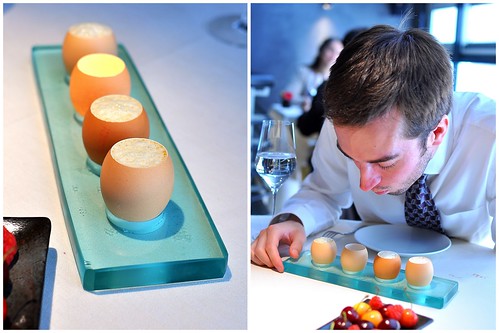 Served inside hollowed-out egg shells were shots of jasmine-infused eggnog. Slightly chilled and tasting so very floral, the eggnog was downright spectacular. A small candle was placed in one of the shells to wish The Astronomer a happy birthday. 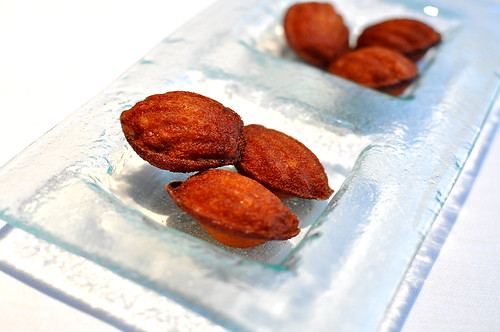 The warm madeleines were lovely as well, but we were too stuffed to really enjoy them. 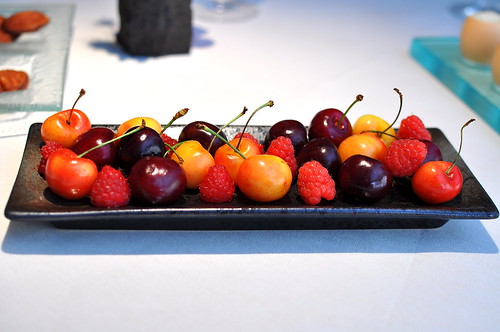 And finally, a plate of ripe cherries and raspberries. There’s always room for a fruity finish.

Our party of three had a splendid time at L’Astrance. Even though we didn’t have any say as to what was served, every course possessed flavors and ingredients that excited our palates. Perhaps we were fortunate enough to dine on a day when the menu suited us just right. Or maybe Chef Barbot is an amazing talent who can turn something as unremarkable as a cherry pit into an event. I have a feeling it’s the latter.