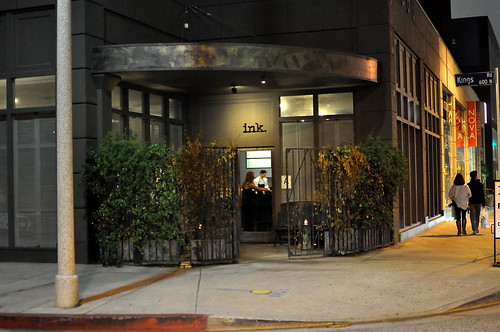 Michael Voltaggio, the former Chef de Cuisine at The Bazaar by José Andrés and Executive Chef at The Dining Room at The Langham, and the winner of season six of Bravo’s Top Chef, opened his highly anticipated first restaurant in 2011 on a stretch of Melrose known more for its fashion than for its fare. Here at Ink, a minimally appointed space painted a shadowy shade of gray, Chef Voltaggio creates “modern Los Angeles cuisine” that marries molecular gastronomy with surprising flavor combinations and highly stylized plating.

Based on my lukewarm meals at both The Bazaar and The Dining Room, I wasn’t expecting the strongest showing at Ink. However, I was downright tickled to find that the food here was playful, beautiful, thoughtful, and very much delicious. 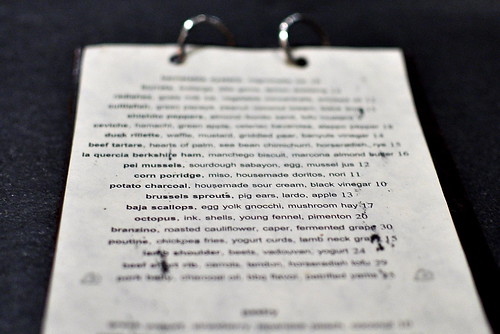 Diners can order family style from the a la carte menu, three to four dishes per person is recommended, or indulge in a four-course tasting plus dessert orchestrated by the kitchen. While the former allows for freedom, the latter features unique dishes not available on the a la carte menu. Since The Astronomer and I had plans for a second dinner later on, we went with the a la carte option. 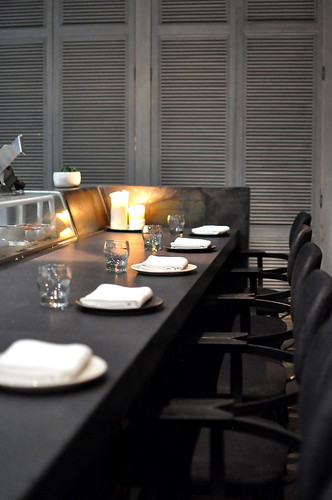 We sat at the “sushi” counter this evening since we didn’t have advanced reservations, which provided stellar views of the chefs making modernist magic with liquid nitrogen and thermal immersion circulators. I highly recommend snagging a seat along the counter for dinner and a show. 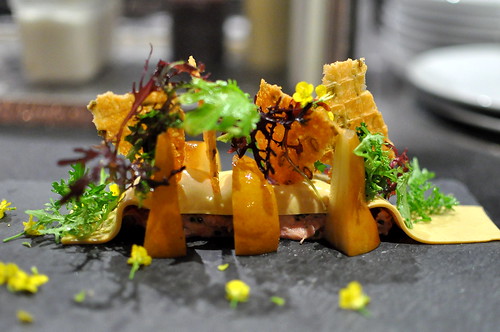 We started with an order of the duck rillettes ($14) served with savory waffle crisps, “griddled pear,” and a ribbon of jellified mustard. The flavors were wholly familiar, while the textures surprised and the presentation impressed. These were the least rustic duck rillettes we’d ever encountered. 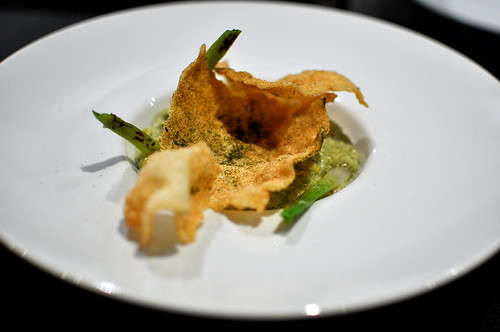 Next to arrive was the corn porridge ($11), a marvelously mushy mash of sweet kernels and nori (dried seaweed) topped with house-made Doritos reminiscent of Vietnamese shrimp chips. Comfort foods are rarely considered innovative, but this dish somehow managed to strike both notes. 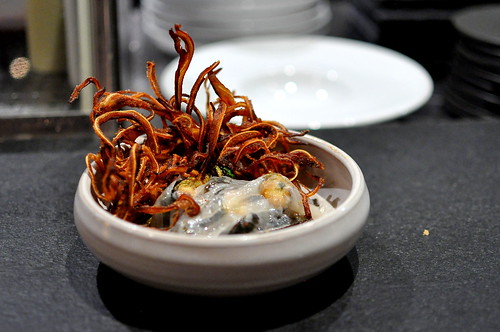 The most delightful dish to eat was the Brussels sprouts ($13), halved and draped in house-cured lardo and accented with a tangle of fried pig ears and a tart green apple sauce. 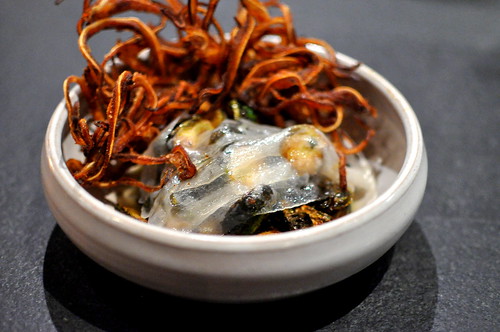 I couldn’t decide which element I loved more—the crispity crunchity cartilage or the caramelized and rich sprouts. 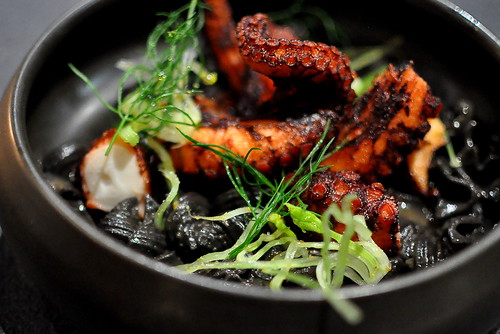 The final savory course of the night featured pimenton-crusted octopus tentacles, “ink. shells,” and young fennel ($20). The octopus was a touch too tender for The Astronomer and me—we prefer some chew and char when it comes to our eight-legged friends—but the pitch-black shells were pitch perfect. 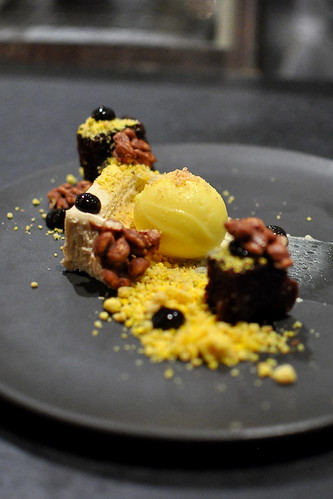 Moving on to desserts, we were pleased to find that the sweets here were as exciting as the savories. The Astronomer’s selection, a playful corn-inspired number, featured persimmon pudding, white chocolate, and huitlacoche ($11). It was awesome. 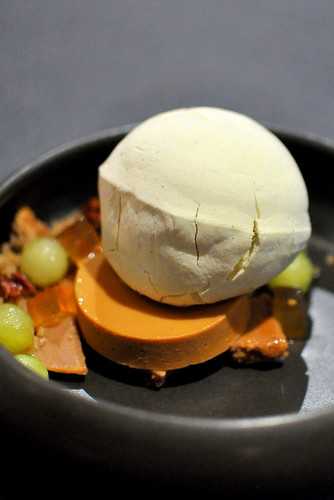 I went with the “apple, caramel, walnut, burnt wood ice cream” ($10). Infused with applewood ashes, the ice cream was legitimately smokey and paired  fantastically with the caramel tart, compressed green apples, and the apple juice gelée.

My expectations were admittedly low walking into Ink this Sunday night, but I left beaming and excited about the food and fun I had experienced. While Chef Voltaggio’s cooking isn’t the kind of thing I’d desire on a regular basis, I would enthusiastically return here for a celebratory meal or with out-of-town guests seeking something fancy and different.