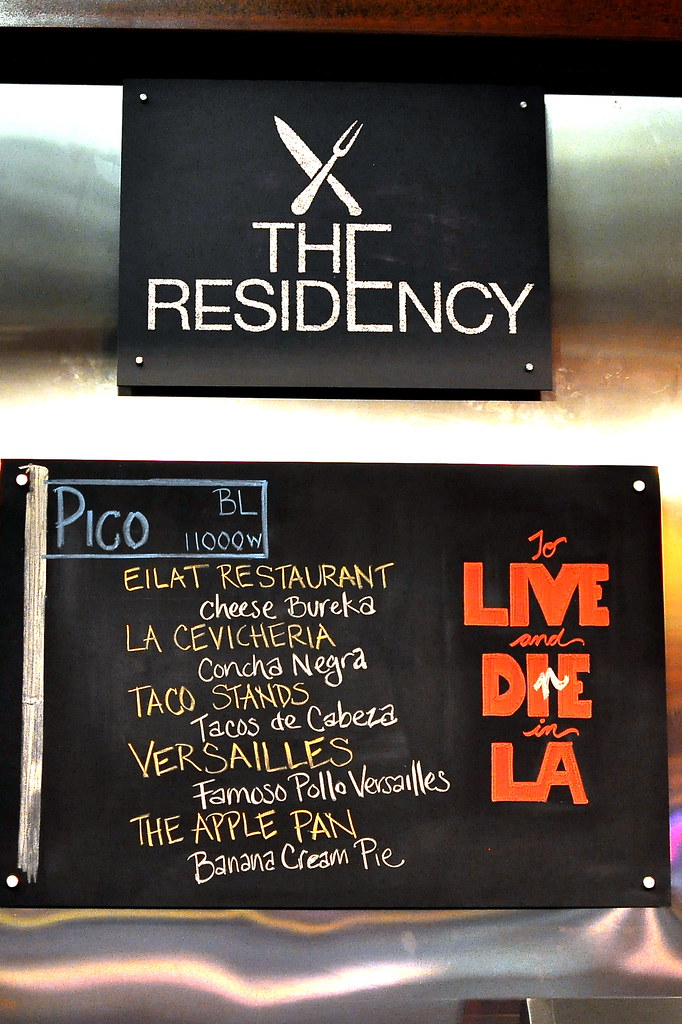 Housed in Downtown’s UMAMIcatessen, this culinary series features a changing roster of chefs from around the country every Thursday night, with each stint lasting 10 weeks. Think of The Residency as Grant Achatz’s Next with a dash of Heston Blumenthal’s Dinner and a pinch of LudoBites’ showmanship. Does that make any sense? You’ll see… 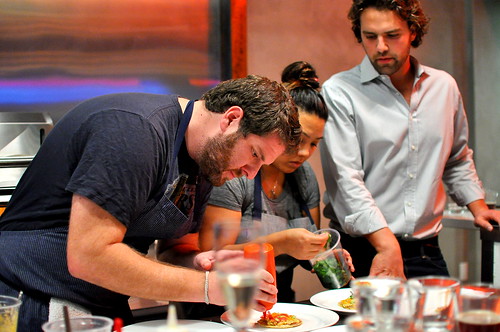 One of the coolest aspects of this experience is the intimacy of the space. With diners seated around a small U-shaped counter and chefs preparing and plating each course just a few feet away, interaction and conversation is encouraged like at no other venue in town. 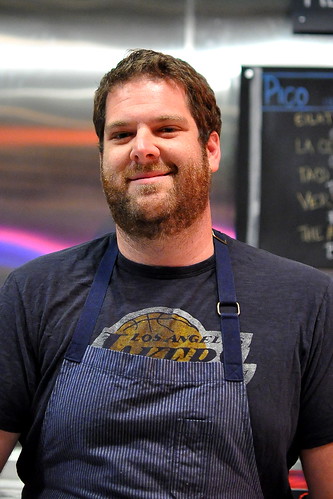 Chef Wexler is as personable as they come, so it was a real treat bantering back and forth with him throughout dinner and probing him about important matters like how to best prepare the flageolet beans I received in my Christmas stocking last year. 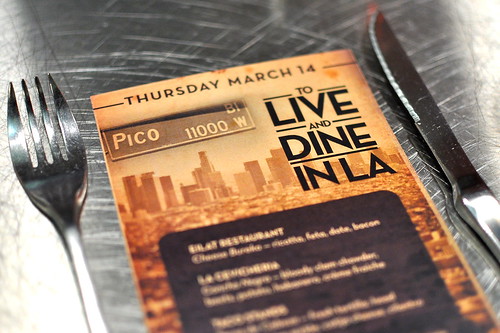 For Chef Wexler’s residency, he is exploring Los Angeles’ most notable neighborhoods, cultures, and time periods—a different one each week. The inaugural “Live and Dine in L.A.” menu features dishes born on Pico Boulevard. As a Los Angeles native, Chef Wexler had a plethora of anecdotes to share about the restaurants and dishes that he selected to pay homage to. 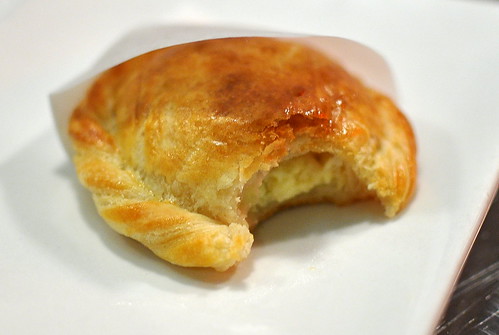 The first course to hit the counter was an individually-wrapped cheese bureka inspired by Eilat, an Israeli bakery in the Kosher Corridor. Filled with ricotta, feta, dates, and bacon, the bureka served as a warm and buttery, “hello.” Go ahead and pass on the Knork flatware for this one and eat it all with your hands. 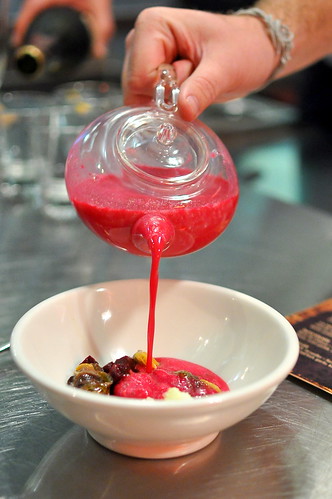 Next to arrive was a most intriguing and delightful interpretation of Julio and Carolina Orellana’s Guatemalan concha negra from La Cevicheria. Instead of a murky cocktail of bloody clams, tomatoes, onions, avocado, mint, lime juice, and Worcestershire sauce, Chef prepared a fetching clam chowder/borscht hybrid. 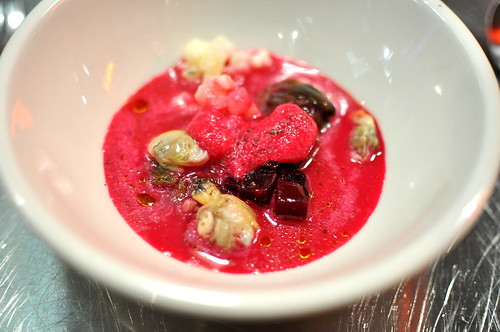 Neat cubes of beets and potatoes lined the bowl, along with the supple Rhode Island-raised bloody clams. A broth made from clam juice, beet juice, habanero chilies, and crème fraiche was poured into the bowl a la minute. This one was light, refreshing, and awesomely briny with every clammy bite. 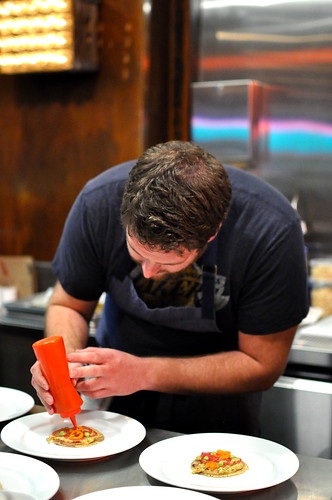 My favorite dish of the evening was the tacos de cabeza, inspired by the taco tables that line Pico after dark. 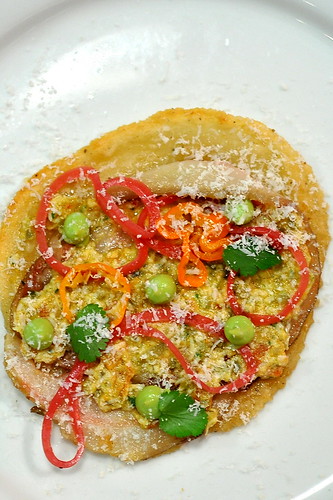 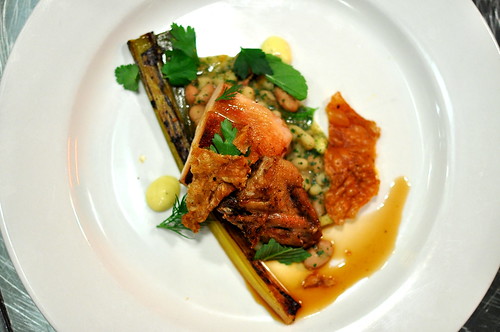 The final savory course was a play on Versailles‘ “Famoso Pollo.” Hunks of bone-in dark meat and boneless white meat were cooked in chicken fat and served over a bed of beans along with a citrus mojo and a charred leek. Chicken cracklings and a flourish of fresh herbs added the finishing touches. 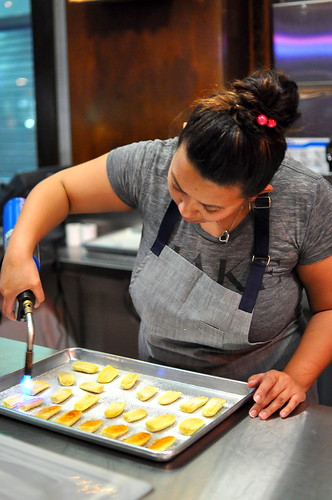 Last but far from least was a deconstructed banana cream pie a la The Apple Pan. The Astronomer and I were mesmerized by the bruleed-before-our-eyes bananas. 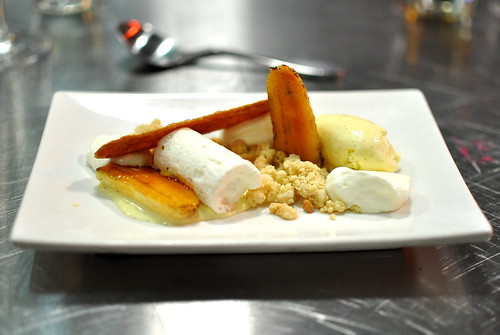 The artistically assembled plate consisted of caramelized baby bananas, two textures of whipped cream, buttery crumbles, and rich vanilla ice cream—I wonder what the folks at The Apple Pan would say about this one!

“To Live and Dine in L.A.” officially begins today with two seatings at 7:45 PM and 9:30 PM. Next week’s menu will highlight Boyle Heights. Chef Wexler mentioned this evening that he hopes to pay homage to the Chinese restaurants in the San Gabriel Valley in the coming weeks. I’ll certainly be the first in line for that one.

2 thoughts on “The Residency at UMAMIcatessen: Chef Micah Wexler’s “To Live and Dine in L.A.””