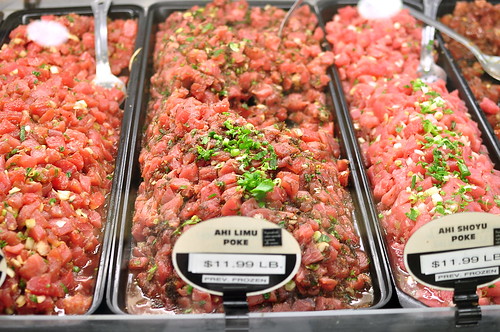 Shave ice is terrific, Spam musubi and plate lunches too, but if I had to choose my favorite grindz, it would be pokē—no doubt about it! Delicious things happen when super-fresh local seafood meets Asian aromatics. Mmm… 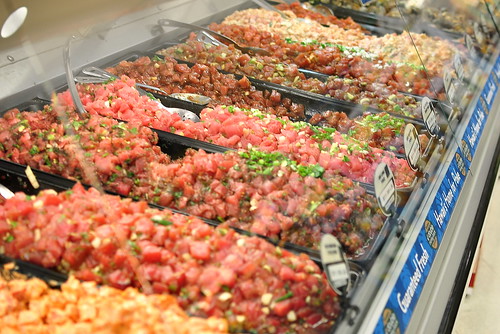 Using Dylan’s fantastic guide as a starting point, along with some good ol’ advice from locals in-the-know, The Astronomer and I were treated to the freshest, most flavorful pokē throughout our Hawaiian stay. I couldn’t get enough of the stuff and required a daily fix, at least.

Here are the five spots that really hit the spot, in alphabetical order: 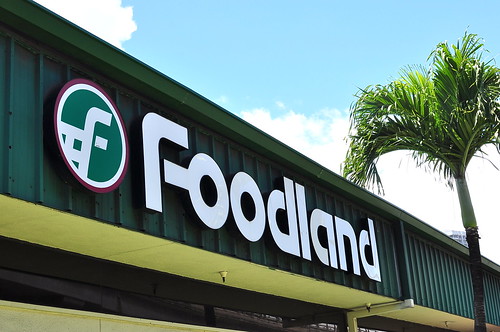 This local chain of grocery stores boasts an incredible seafood section stocked with beautifully prepared pokē sold by the pound. As evidenced by the two images posted above, Foodland truly is “Hawaii’s Home for Pokē.” 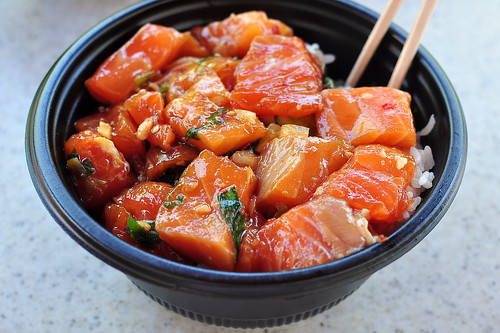 While I would’ve welcomed a full pound of pokē in my belly, my more reasonable half insisted that we order individually portioned “pokē bowls” ($6.99) instead. My Korean-style salmon pokē was served atop hot steamed rice with a generous sprinkling of furikake in between. The seasoning and spicing was just my speed. 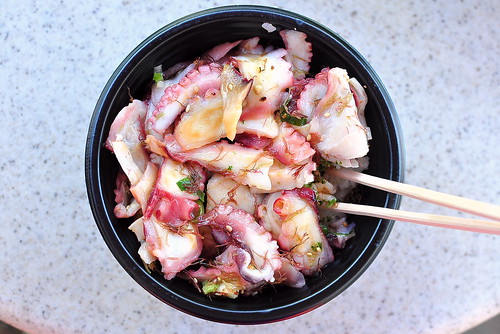 The Astronomer’s octopus and seaweed pokē was equally great, packed with plentiful and tender tentacles. 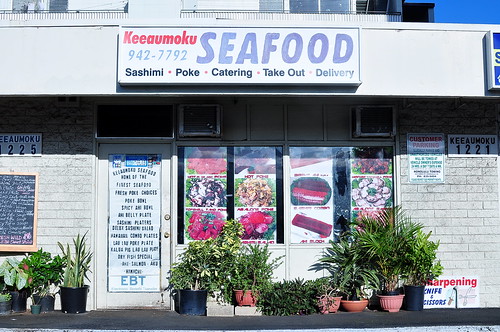 Keeaumoku Seafood is one of my friend Liana’s favorite pokē shacks in town, so we stopped in for a snack while walking to Ala Moana Center one day. 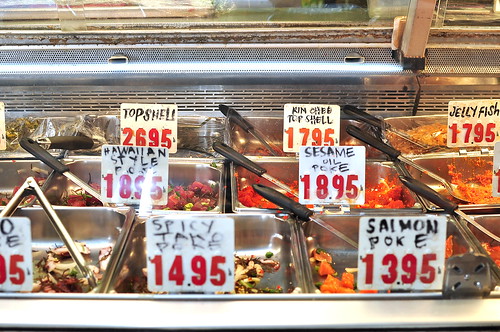 For such a small shop, the pokē selection was impressively varied. 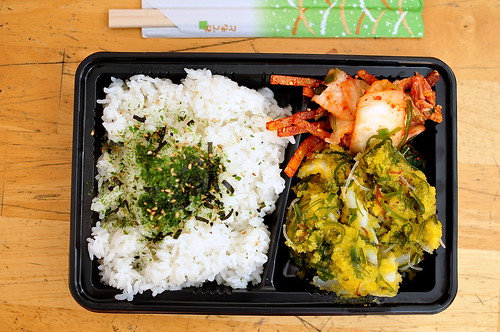 We shared the Pokē Bento ($8.95), which included a choice of pokē, kimchi, and furikake-topped steamed white rice. We chose the abalone pokē, Liana’s favorite. The thinly sliced and awesomely tender abalone was mixed with several types of seaweed and plenty of fish eggs. Great stuff! 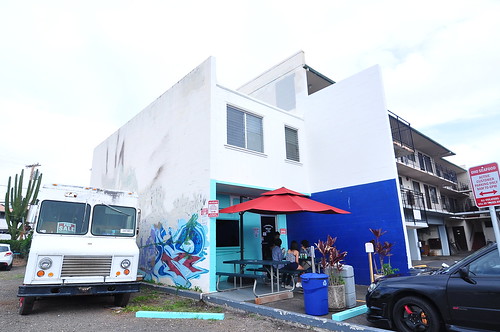 Founded by Judy and Willy Sakuma, Ono Seafood is regarded as one of the best pokē purveyors in town. Crowds line up for Ono’s simple menu offerings that include just four preparations each of ahi (tuna) and tako (octopus). 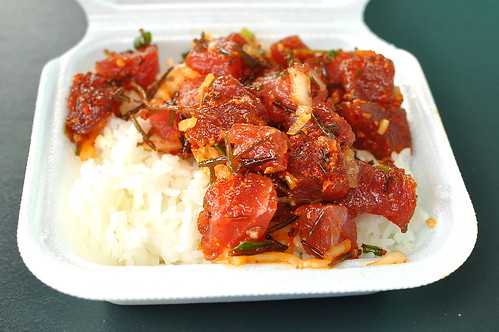 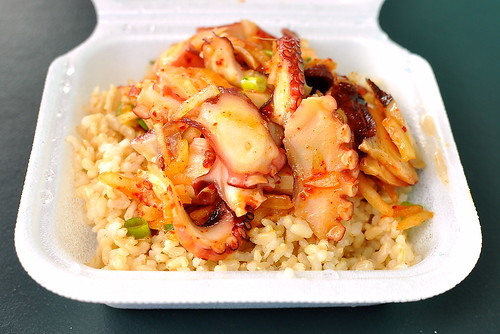 For me: the “Shoyu Tako”($7), marinated in “savory secret shoyu,” green and white onions, limu, kukui nut, chili pepper, and sesame oil, served over brown rice. In both cases, the superbly fresh seafood was complemented by the pitch perfect seasonings. Where Ono lacks in variety, it more than makes up in quality. 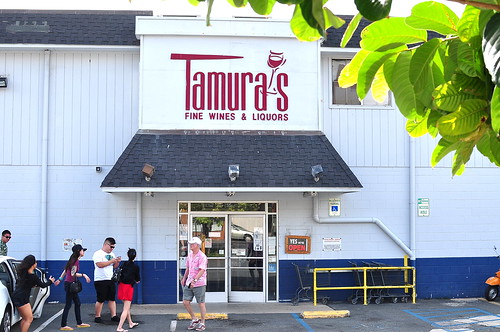 Pokē is so prevalent on the island that one can even find it at a liquor emporium like Tamura’s. Located toward the back of the store, amidst the aisles of wine and booze, the pokē counter offered over two dozen different kinds. 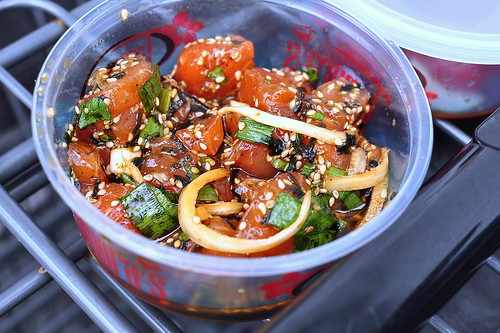 The Astronomer and I shared three different pokē, including salmon marinated in shoyu (soy sauce) and a double punch of sesame oil and fragrant sesame seeds… 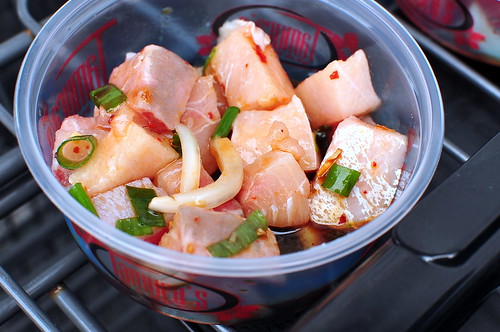 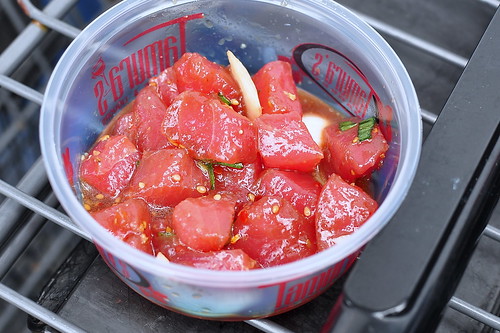 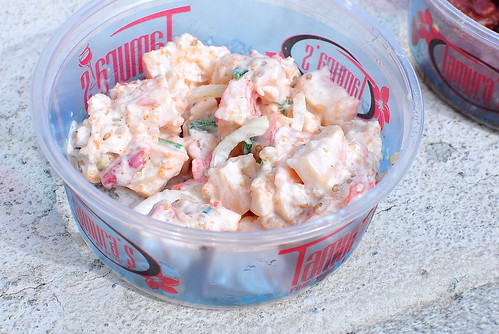 Liana picked up a serving of garlicky king crab… 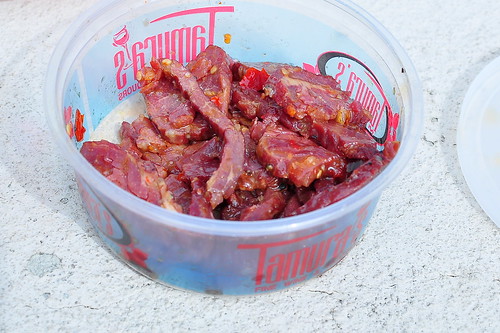 …as well as pipikaula, a sweetly marinated Hawaiian beef jerky that had just a touch of heat. Now, if I weren’t pregnant at the time, a fine bottle of bubbly to wash everything down would’ve been in order. 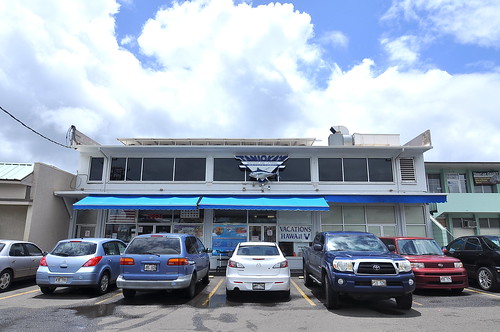 Finally, we stopped into Tanioka’s Seafoods & Catering on our drive to the North Shore at the suggestion of Misty. This 37-year-old spot does brisk take-out and catering business with staggering lines to match. 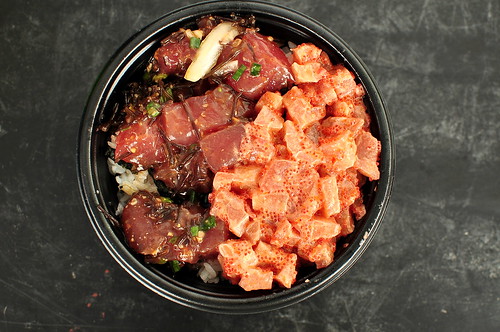 In addition to musubi, mochiko chicken, tempura, kimbap (Korean sushi) and inari, The Astronomer, Liana, and I shared a pokē bowl with ahi and salmon-tobiko. I have yet to meet a pokē that I didn’t love.

6 thoughts on “I ❤ Pokē: Five Honolulu Spots that Hit the Spot”