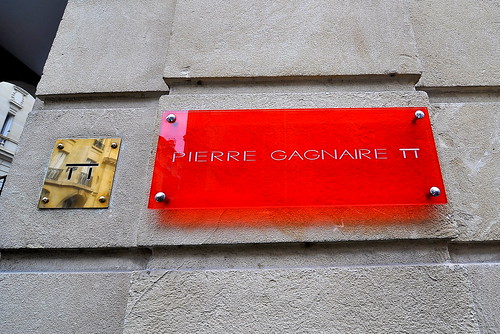 Restaurant Pierre Gagnaire is a Parisian institution famous for its jarring juxtaposition of flavors and textures, as well as its dizzying presentation of small dishes. Chef Pierre Gagnaire opened his eponymous restaurant in 1996 on the ground floor of the Hotel Balzac, a short walk from the Champs-Élysées. It is the recipient of three Michelin stars and other prestigious accolades. 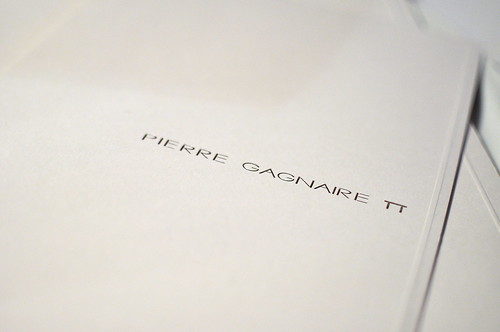 Prior to dining at Pierre Gagnaire, I had read that one either loves or loathes the dining experience here because of its unorthodox flow and composition. I was pretty sure that I’d fall into the former camp because I appreciate modern, unexpected, and inventive flourishes when it comes to fine dining.

While I was curious to try Pierre Gagnaire’s unique style of cooking, the 265€ price tag for dinner seemed like too much to gamble. We came in for lunch instead, which was priced at a more palatable 105€. 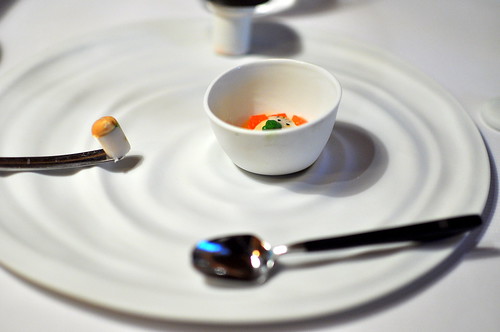 To start, we were treated to lots of little bites whimsically scattered around the table. 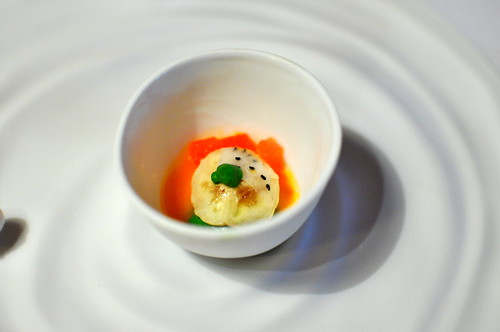 In the center of the action was a slice of banana paired with watermelon, dragon fruit, and a puree of spinach and watercress. 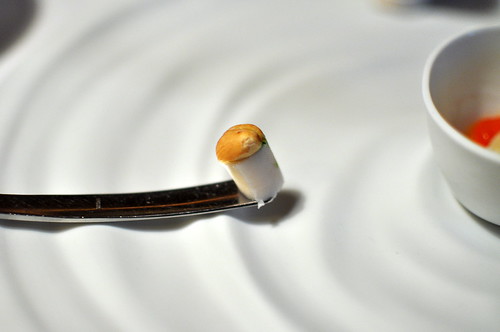 To the left was a thimble-sized nugget of Italian lard topped with a single hazelnut. 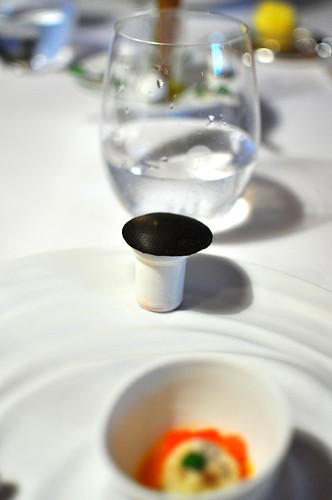 At the very top of the ridged platter was a tandoori-spiced mixture of carrot, tuna, and green olives beneath a squid ink biscuit. 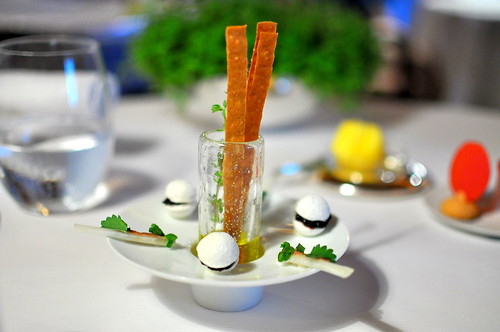 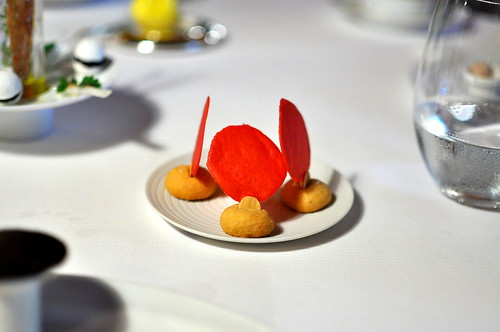 The last of the amuse bouches was a set of almond and ginger shortbread cookies spliced with beet root biscuits. 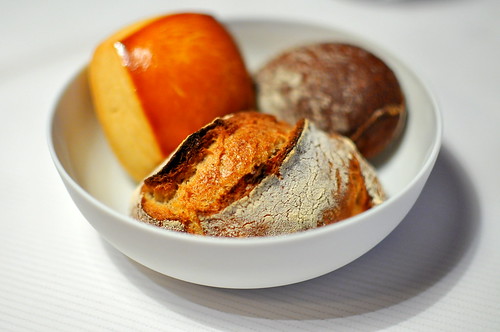 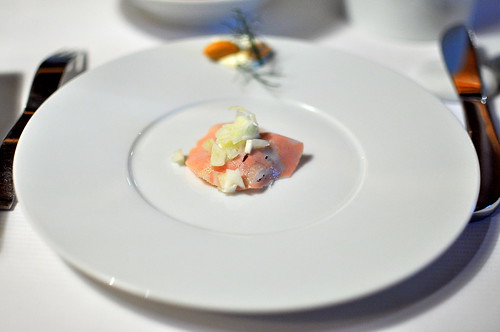 The “Cocktail de Poche,” a course of appetizers, consisted of five different plates. The one closest to each of us featured mortadella sausage with fennel candied in carob molasses. 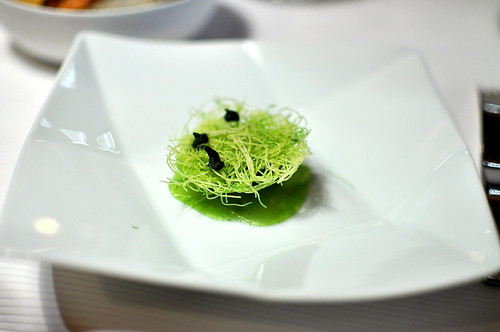 There was also a crispy nest of nettle pancake with cucumber… 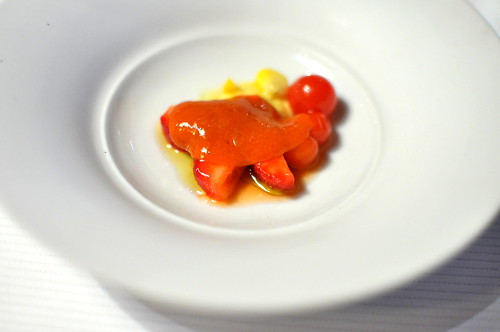 … and a summery platter of fresh strawberries, tomatoes, and corn flavored with colombo spice, as well as a piquillo pepper sorbet. 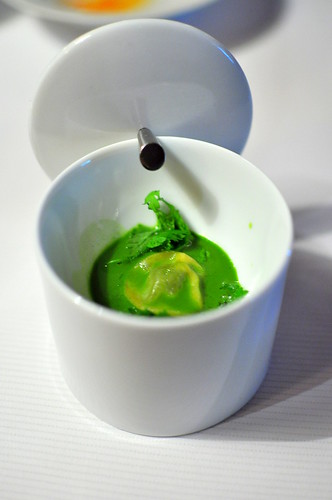 A single cress ravioli was served in an aromatic “broth Zezette.” 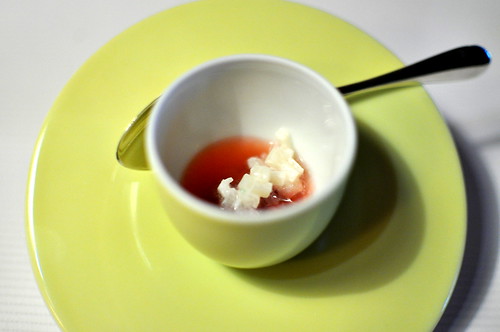 The final appetizer was a rhubarb water gelee with fresh hearts of palm. 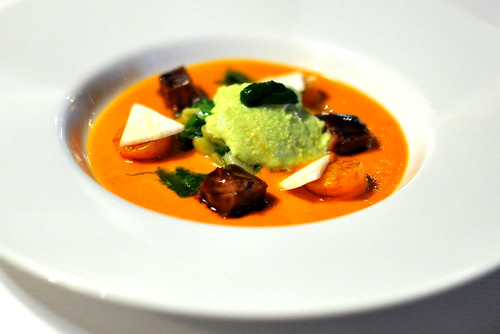 The parade of amuses and appetizers was followed by a substantial plate of glazed Pluma Ibérico in a velvety mint and red pepper soup. A scoop of  stracciatella flavored ice cream, Ratte potatoes from Noirmoutier, young spinach leaves, and Revard cheese completed the plate. 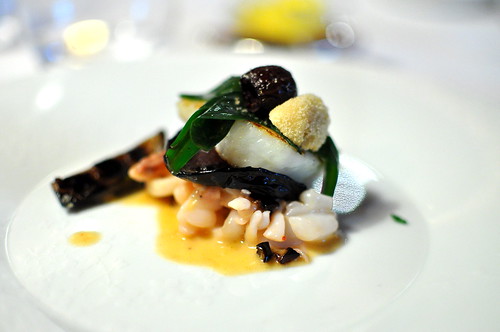 The second larger course was even better than the first. It featured a large steak of salted cod grilled à la nacre, pan-fried squid with black olives, white aubergines, and violet flowers. 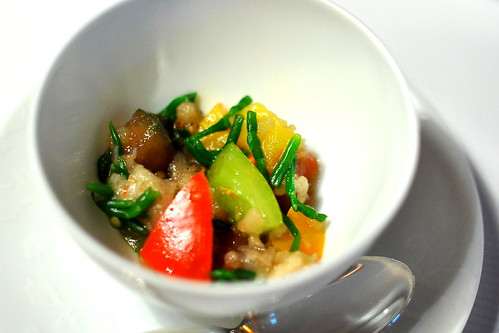 It was served with a little side dish of tomatoes, eggplant, and sea asparagus. 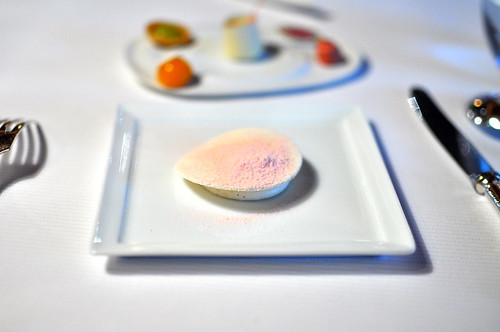 Dessert was a seven-dish affair. An almond cookie dusted in magical pink powder was the first to go down the gullet. 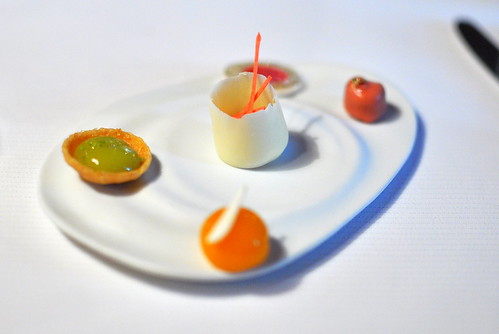 It was followed by an apricot orb, a lime and basil tart, a white chocolate shell filled with raspberry jam, a candied gooseberry, and a morsel of white chocolate dyed a fetching shade of pink. 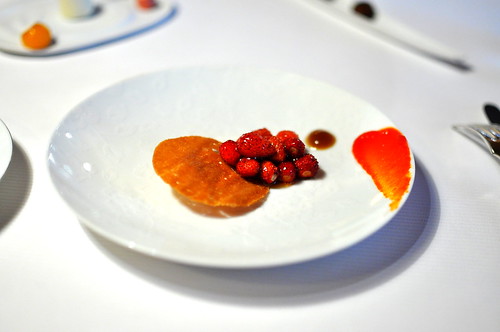 Wild strawberries were served with a red pepper swipe, successfully combining sweet and savory onto a single plate. 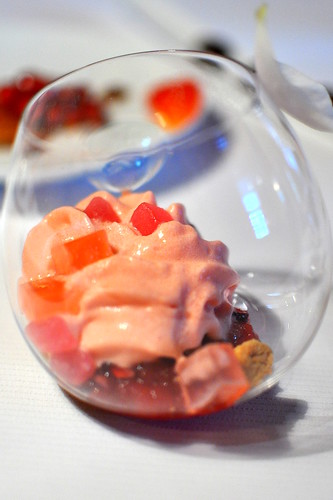 The most challenging of the sweets was a red cabbage- and beer-flavored foam served with pomegranate gelee and seeds. While the foam’s pretty color drew me in, I found its flavor impossible to warm up to. A beer enthusiast I am not. The beer-loving Astronomer, on the other hand, liked it quite a bit. 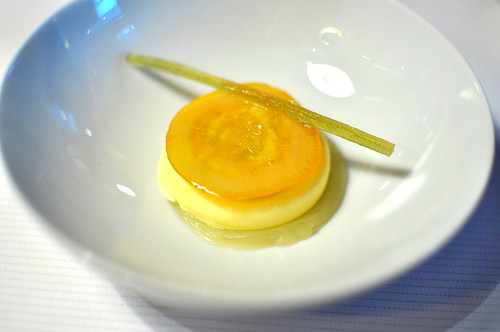 Another bowl featured a study in limes—gelee, candied, and biscuit. The sprig of angelique served atop was just as unappealing as it was the night before at Le Chateaubriand. 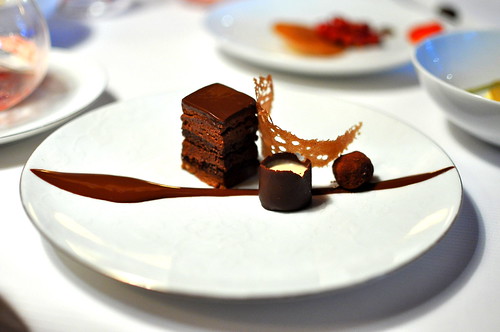 The chocolate platter starred a decadent square of Pierre Gagnaire’s signature chocolate cake along with a hazelnut tuille and a shot of coffee liquor cream served in a chocolate shell. For someone who doesn’t get particularly excited about chocolate, I was swooning over everything on this plate, especially that creamy shot. 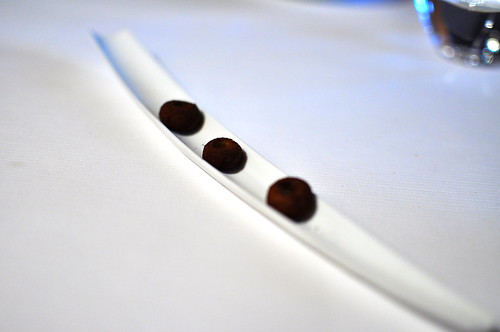 Lunch at Pierre Gagnaire was certainly fun, undeniably beautiful, and mostly delicious, but it didn’t deliver any one dish that truly impressed. On the flip side, there weren’t any complete bombs either. I had a good enough time this afternoon, but my meal didn’t inspire me to upgrade my Pierre Gagnaire experience on future trips to Paris. Once was good ’nuff for me.