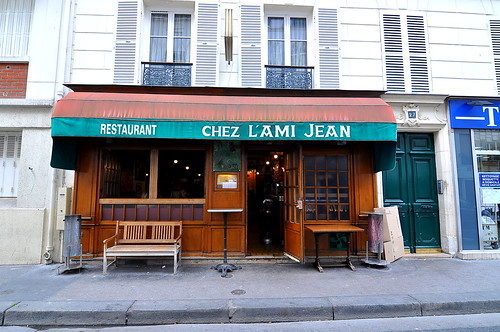 For our final dinner in Paris, we dined at Chef Stéphane Jégo’s bastion of Basque cuisine Chez l’Ami Jean. 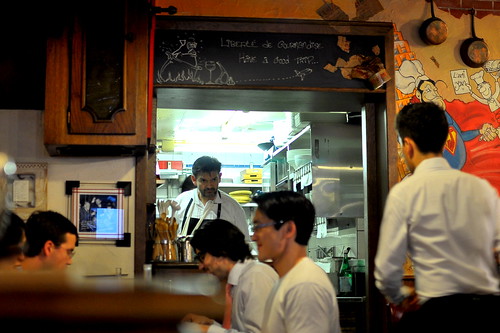 Before I get to what we ate and how splendid it all was, a little background on the significance of the restaurant and the chef (pictured above). Take it away, Food Snob Blog:

Chez l’Ami Jean, first opened by a Basque nationalist in 1931, is Paris’ most celebrated exponent of that region’s cuisine. It is also one of the city’s best representatives of the ‘Bistro Moderne’ movement. This is the name bestowed by Gault Millau on the 1990s trend that saw traditional bistros reinvented by chefs who had been formally trained in France’s more formal kitchens. In short summary, after the 1980s and what was the apogee of haute cuisine, kitchens were full of enthusiastic young chefs dreaming of opening their own restaurants. The economic recession of the early 1990s, however, meant that for many this remained but a dream, whilst for others it meant a compromise and instead of their own fine-dining restaurants, they settled on (cheaper) bistros. They brought with them new, more advanced techniques and ideas and succeeded in reversing the decline of these old establishments. The founding fathers of this movement included Christian Constant, Eric Frechon and Yves Camdeborde. In Paris, these men are household names and it was with the last, at La Régalade, where Chez l’Ami Jean’s chef, Stephane Jégo, spent twelve years as his second.

Stéphane and his wife Sandrine took over the Chez l’Ami Jean in 2002 following his departure from La Régalade. Rumor has it that the rugby-playing chef once forced a Michelin inspector dining at the restaurant out onto the street. “They will never be welcome at the restaurant; they have too many tick boxes,” he says. 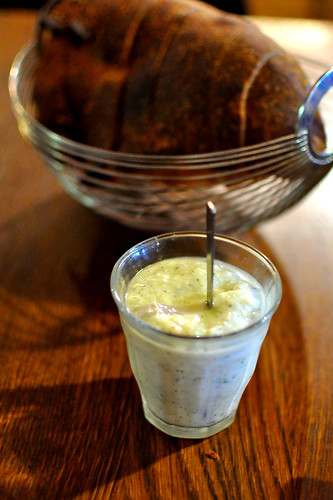 The Astronomer, Mom, and I arrived early for our reservation and were seated straightaway without too much fuss. A beautiful loaf of bread accompanied by a glass of  “country cheese spread” was brought to the table soon after we were seated. The spread was quite mild, so several spoonfuls were required to pack the punch that I desired. 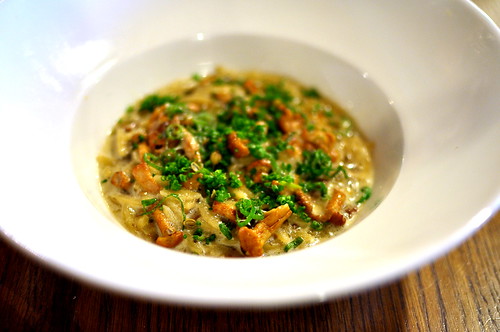 Chez l’Ami Jean offers several pre fixe menus, as well as an a la carte menu during dinner service. We chose the 42€ three-course set, which included a starter, main, and dessert.

Mom selected the lague d’oiseaux facon risotto “servie paella” for her first course. The mushroom risotto was so incredibly earthy and comforting that I wished I had ordered it myself. Fortunately, Mom’s palate was getting a little fatigued by this point in the trip, so she was happy to share. 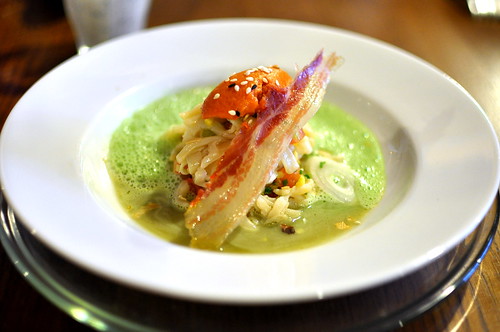 My tomates de charme encornet vinaigrette struck a totally different note from the risotto. The slippery squid “noodles,” which were topped with a sweet tomato ice cream, were refreshing and completely delightful in the muggy Parisian weather. I slurped up every last encornet. 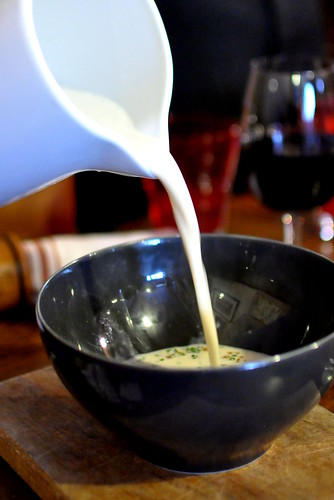 The Astronomer’s Maman Philomène sert son potage “croutons, ciboulettes” looked like a run-of-the-mill cream soup, but the flavors were astoundingly good. The fresh peas, chives, and bacon were superb touches, of course, but the broth poured tableside was the heart of the success. The waiter was kind enough to leave the soup that didn’t fit into the bowl at the table for The Astronomer to help himself. And help himself he did! 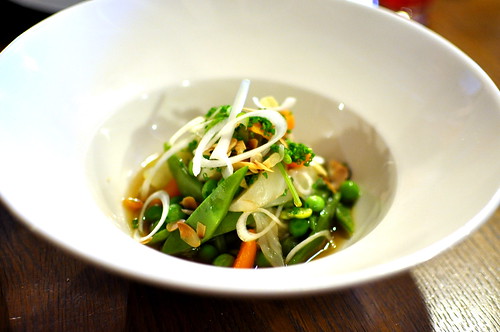 For her main course, my poor, palate-fatigued mother ordered the cocotte de’ete legumes d’ etouffes amande fraiche, a melange of perfectly prepared vegetables in a light broth. I guess this is what happens when you spend two-and-a-half-weeks eating with someone who calls herself The Gastronomer. 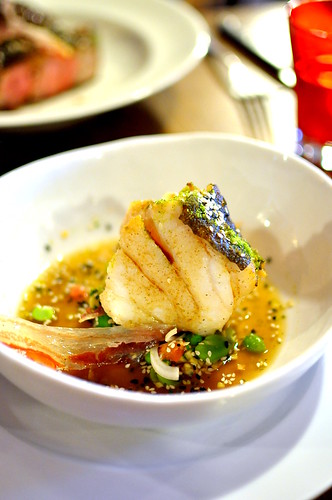 I chose the de morue fraiche rotie au four for my main course. The crispy-skinned and tender-fleshed filet of cod did not disappoint. 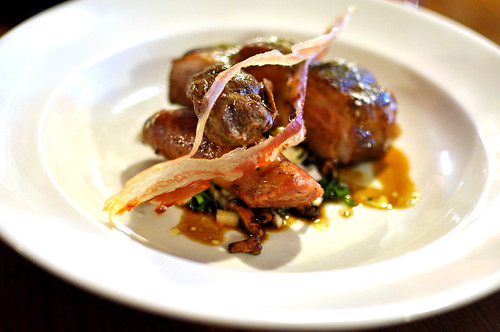 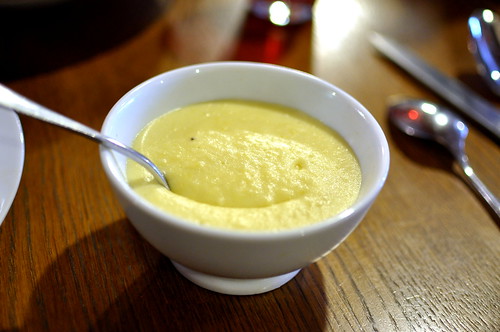 A bowl of pureed potatoes was served alongside The Astronomer’s main course. 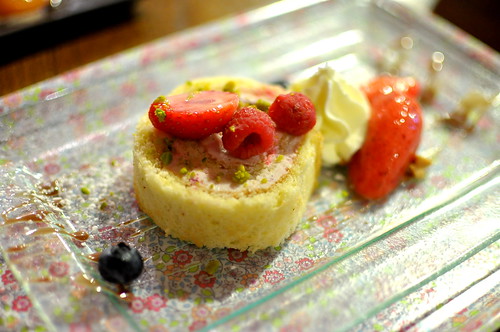 The desserts at Chez l’Ami Jean are handled by a tenacious Japanese chef named Yuka Hayakawa. Her signature Kokololo, a kind of Japanese cake, was prepared this evening with fraise fruits de saison. Served alongside the swirly strawberry mousse cake were a scoop of strawberry sorbet and fresh berries. 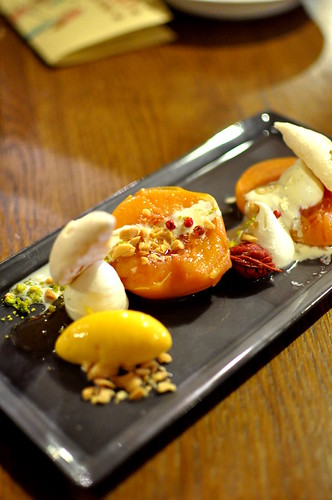 The peche de saison Travaille “melba“ was equally light and fruity. The pink peppercorns served atop the ripened fruit and peachy sorbet brought a lot of crunch and a little burn. 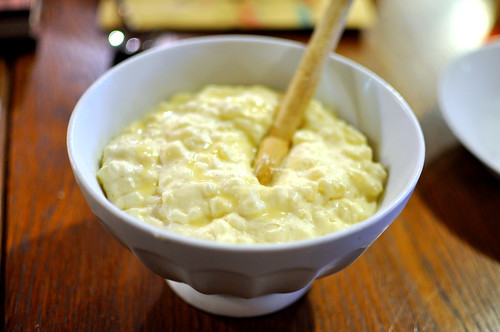 The dessert that I went gaga over was the restaurant’s famed rice pudding: riz au lait, grand maman, caramel beurre sale. It arrived at the table  in a humongous bowl with a wooden spoon for serving. This immensely fluffy, whipped cream-laced pudding was seriously delicious. Try as I might to polish off the whole thing, it was just too much richness for me to handle. 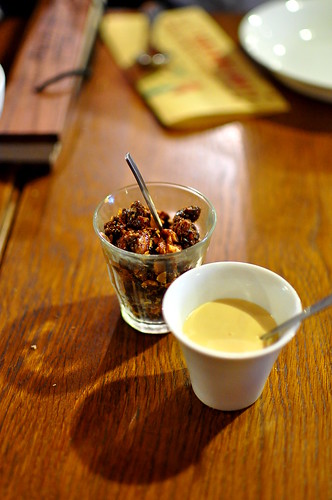 A salted caramel sauce and candied hazelnuts were served on the side for garnishing. For a taste of Basque-style rice pudding, check out this recipe that Chez l’Ami Jean provided to the New York Times. Or better yet, if you live in Los Angeles, head to Lazy Ox Canteen or Baco Mercat for a restaurant-made version.

We were sent home with bellies ready to burst and a box of meringue cookies that I devoured on our train ride to London the following day. 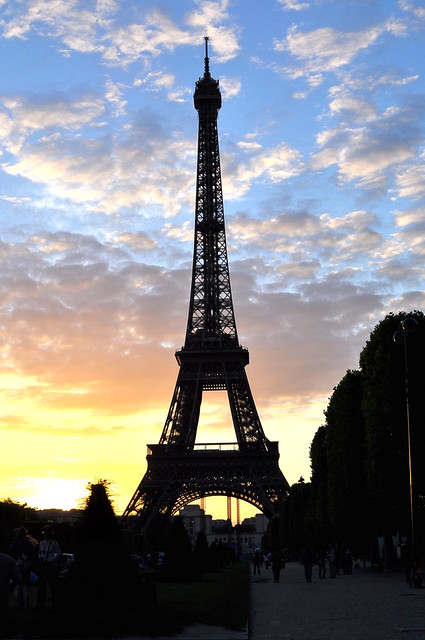