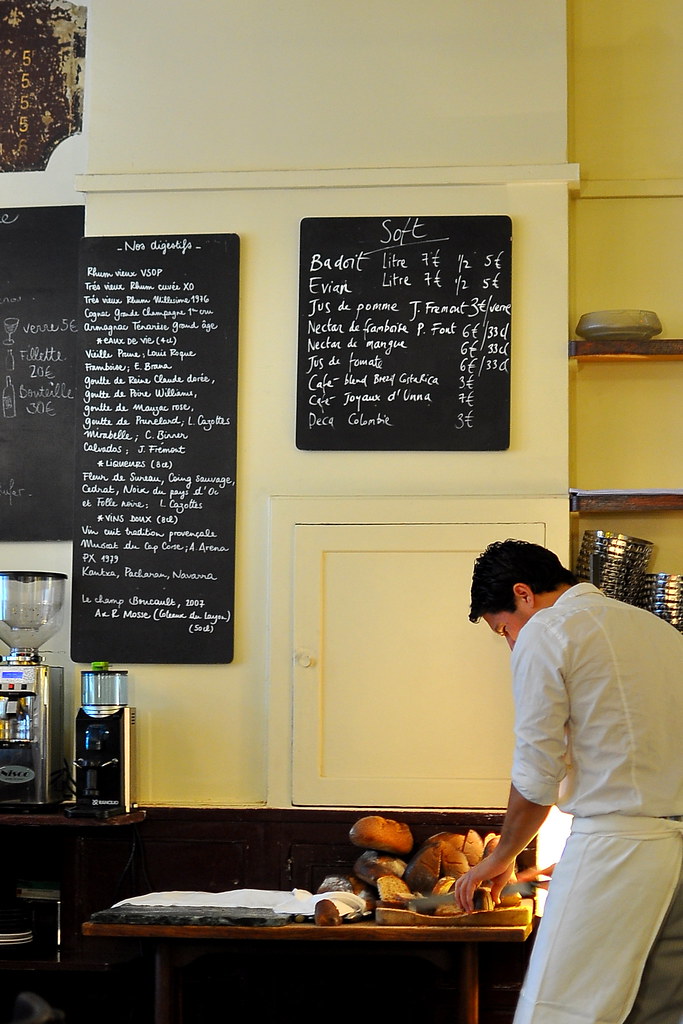 After a week of countryside explorations in the Loire Valley, Provence, Burgundy, and Normandy, we returned to a sweltering Paris for one final hurrah. Air conditioning is a luxury that the French don’t seem to appreciate, which made for some uncomfortably hot hotels, museums, and restaurants. Easily the stickiest and sweatiest meal that we endured was at Le Chateaubriand, a renowned neo-bistrot led by Chef Inaki Aizpitarte. 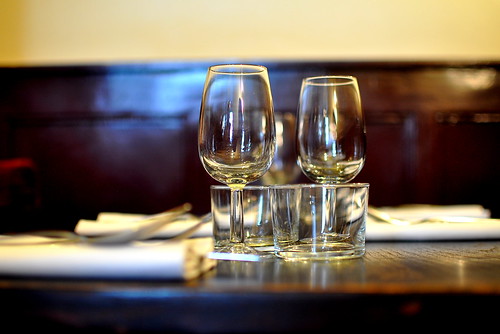 Here at Le Chateaubriand, the self-trained Basque chef prepares his signature cuisine de vagabond, which is known for its unique flavor combinations and a penchant for raw and sous-vide preparations.

While lunchtime is a casual affair, dinner brings two seatings and one set menu (60€). We managed to reserve a table for the first one, which saved us from waiting in line at 10 PM for the first-come-first-served second round. 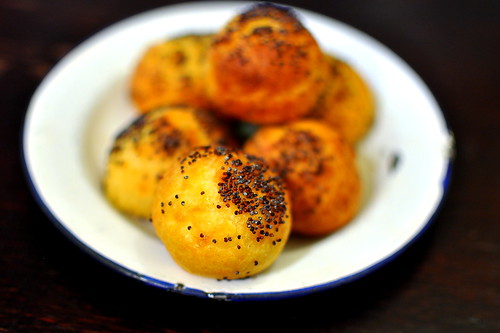 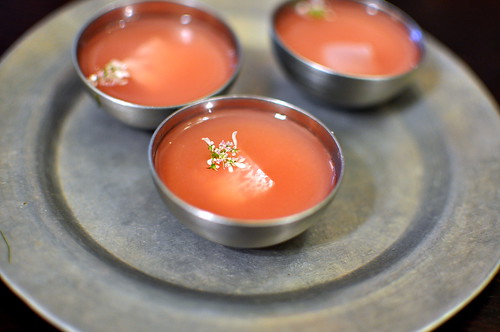 A dorade ceviche came swimming in a pretty pink liquid that the waiter swore was just sea water and lemon juice. 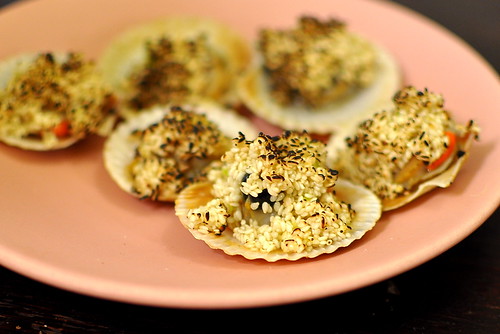 We also slurped raw clams with hundreds of charred and toasted sesame seeds clinging tightly to them. 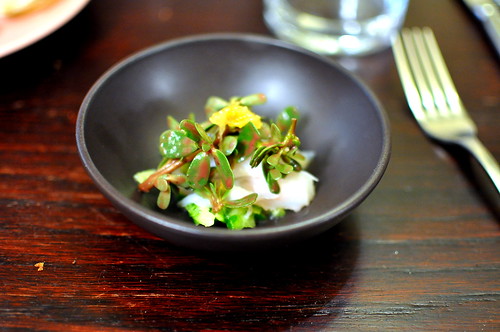 The clams were followed by a simple sashimi salad of skate and cucumber. 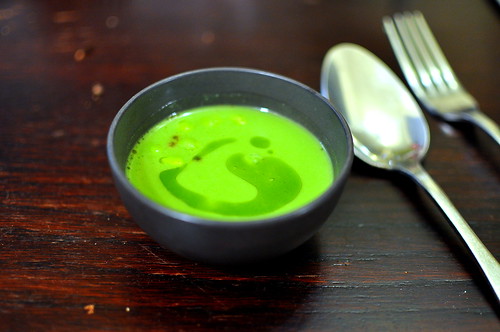 The final small bite was a chilled pea soup with trout roe. If the five amuse bouches provided any indication, we were in for an outstanding dinner. 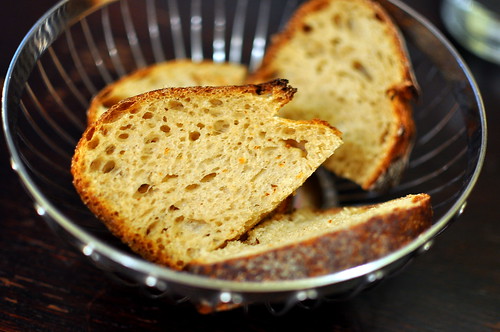 Crusty loaves with charred crusts and spongy innards were refilled throughout the meal. 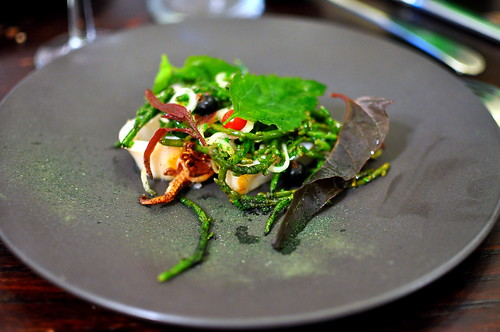 The first official course was a warm squid salad with sea asparagus, onions, red currants, and wakame powder. The warmth of the squid took us by surprise after a series of mostly cooling bites. That, along with the squid’s unparalleled tenderness, made this course one to remember. 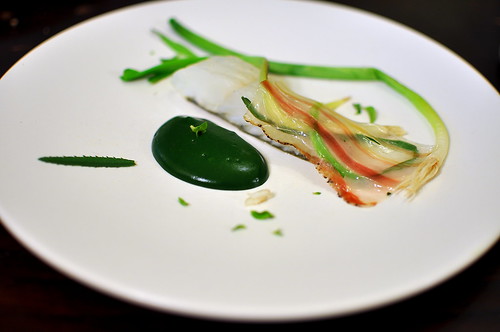 The fish course featured a tender filet of turbot served with a slim stalk of leek and the sheerest strip of bacon. The wickedly thick angelique sauce served alongside had an assertive and astringent profile that didn’t sit well with me. Fortunately, the fish was strong enough to stand on its own. 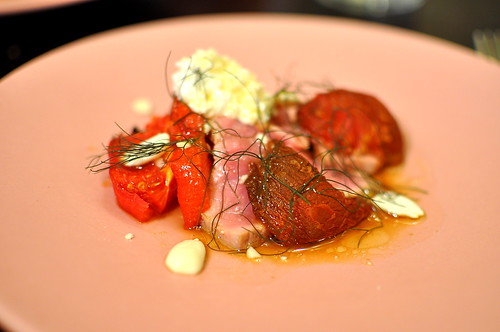 While the fish course left me on the fence, the veal dish that followed was pure satisfaction. The slices of veal were practically raw with just a light sear around the edges. Complementing the unfailingly supple meat were snappy raw almonds, fresh milk cheese curds, the juiciest summer tomatoes, and fennel fronds. 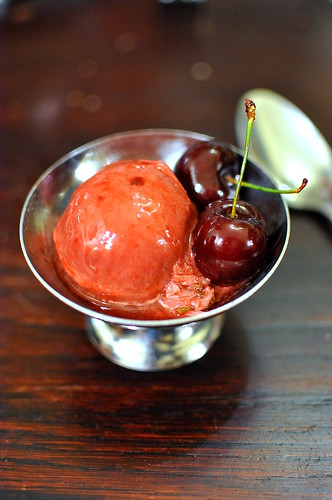 A cherry pit sorbet transitioned our palates from savory to sweet. While the scoop didn’t contain any actual pits, its distinct, woody flavor came through strongly. Fresh cherries and pickled flowers rounded out the dish. 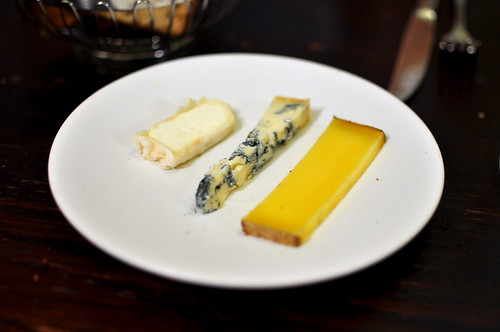 We were offered cheese courses dozens of times throughout our stay in France, but never bit the bullet until our dinner at Le Chateaubriand. The Astronomer was tickled with the evening’s selection that  included an assertive blue, a hard comte, and a soft goat cheese. 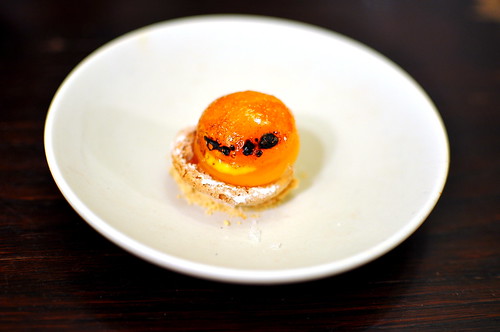 Mom and I loved the tocino del cielo, a traditional Spanish dessert comprised of egg yolks and caramelized sugar with a simple meringue cookie base. Having the slightly sweetened egg yolk explode in my mouth was a truly memorable sensation. 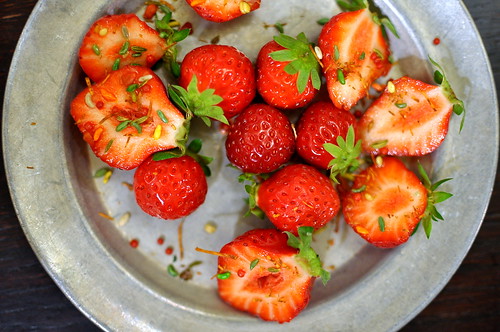 Before sending us off into the slightly cooler night, the chef treated us to a plate of halved and whole fresh strawberries sprinkled with plain and candied anise seeds.

From the parade of small bites to the barely cooked veal  to the sugared egg yolk, Chef Aizpitarte cooks the kind of light, interesting, and mostly raw food that I love to eat. I truly enjoyed the vibe, vision, and execution at Le Chateaubriand and look forward another meal here on my next trip to Paris.