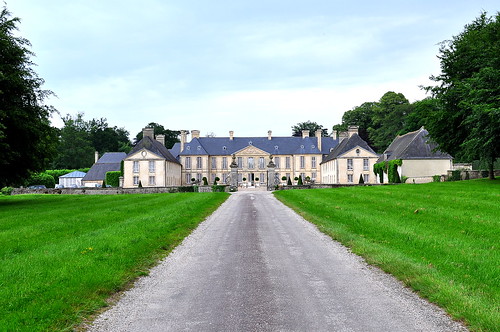 The medieval city of Bayeux is crawling with Americans due to its proximity to Normandy’s  historic D-Day sites, which meant that the restaurants within walking distance of our hotel catered to Yankee tastes. Rather than endure anything less than a stellar meal, we hailed a cab to Château d’Audrieu. I counted far more cows than people on the 14 kilometer countryside ride. The grounds leading up to the château were immaculate. 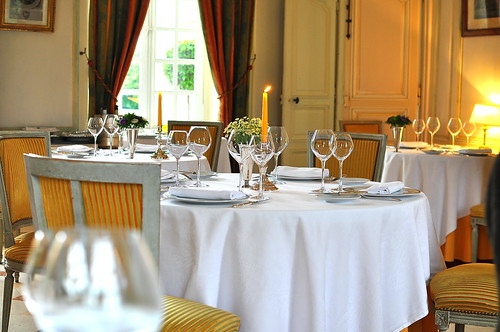 Château d’Audrieu, which boasts a Michelin star and is tucked inside a swanky Relais & Châteaux property, was quite a departure from the homey, family-run establishments that we visited in Burgundy and outside Normandy. We hadn’t been served by suited gents since we departed from Paris.

Chef Olivier Barbarin, who has been leading the brigade here since 2009, combines local ingredients with modern flare.  It was interesting to compare his fine dining point of view with our more rustic dinner from the night before at Manoir de l’Acherie in Sainte-Cécile. 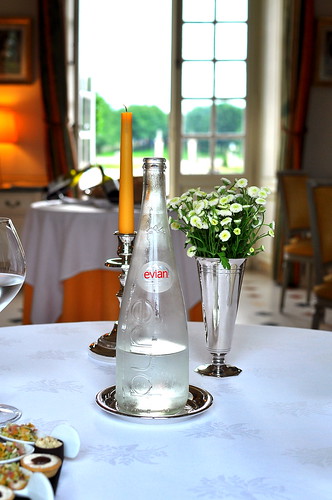 Our table was set with fresh flowers and a single candle. The large windows opening into the courtyard made for an idyllic view. 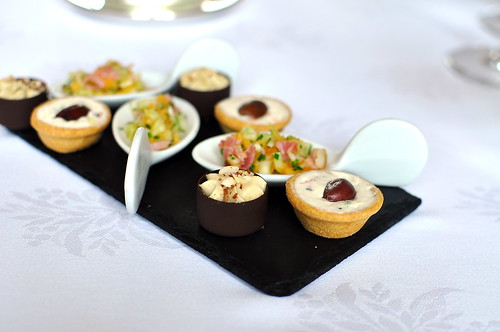 A trio of small bites arrived at the table as we were figuring out whether to go with tasting menus or to order a la carte—we ultimately chose the latter.

There were salmon mousse tarts topped with olives, a salad of fennel, ham, and cantaloupe, and best of all, dark chocolate shells filled with foie gras. The chocolate creation could’ve passed for a mignardise, but it worked superbly as an amuse bouche. 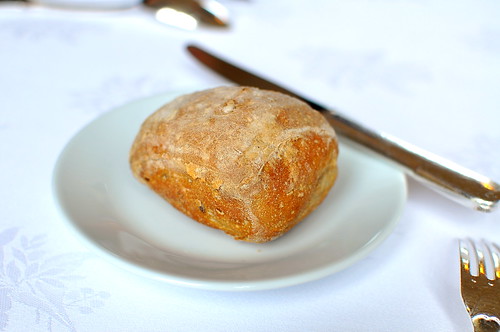 Bread service consisted of a duo of rolls. I chose the multi-grain one… 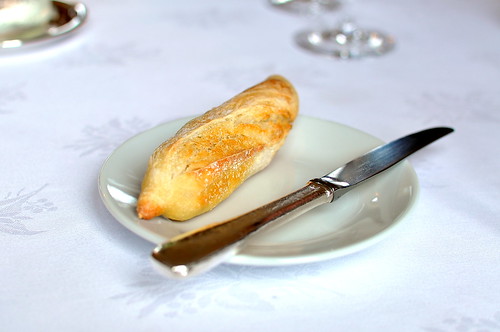 …while Mom and The Astronomer requested the miniature baguettes. Both were mostly crusty and not too fluffy. 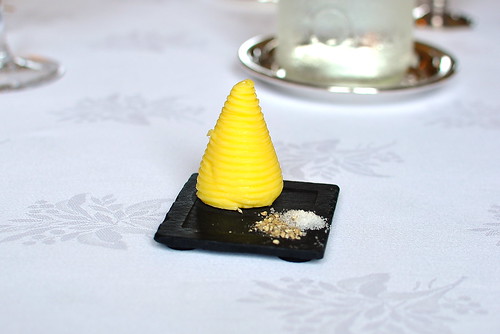 The evening’s butter was shaped like a bee hive and served with salt and pepper. 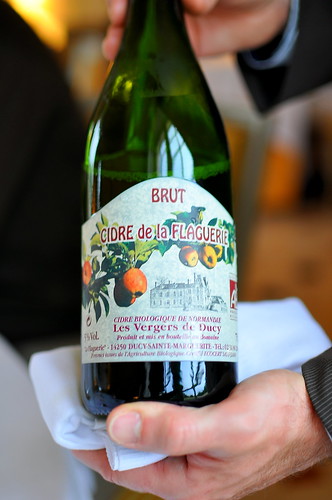 To drink, Mom turned to a big, bold red, while The Astronomer and I couldn’t resist the opportunity to indulge in more cidre. It was as bubbly and fermented as the bottle from the night before. 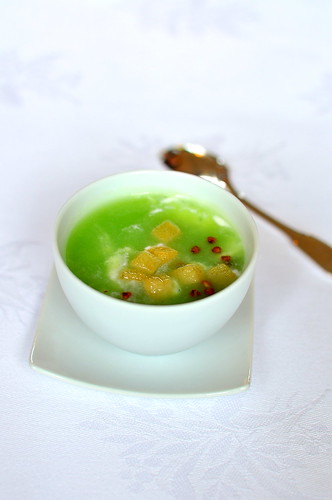 We were treated to a cool cucumber soup topped with cottage cheese and anise seeds before the show officially began. It was light yet immensely flavorful. 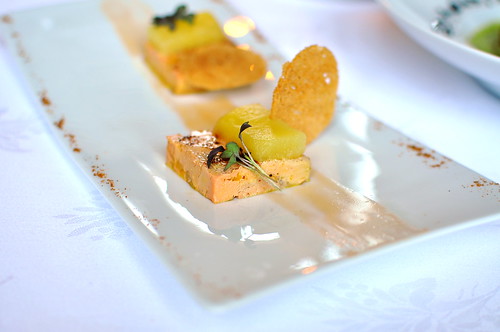 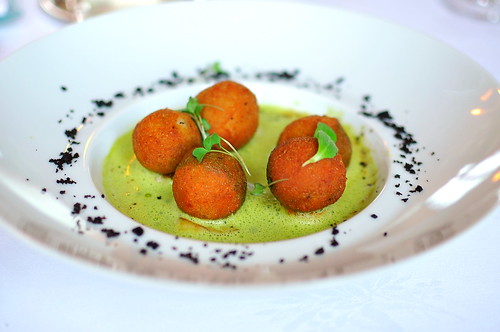 Even better than the foie gras were the escargot (28€). The perfectly round snail nuggets were crusted in herbs, anise seed, and garlic in a frothy artichoke and hearts of palm sauce. Around the edge of the plate was a dusting of black olives. While I love the classic Burgundian escargot preparation best, this dish was very interesting and undoubtedly tasty. 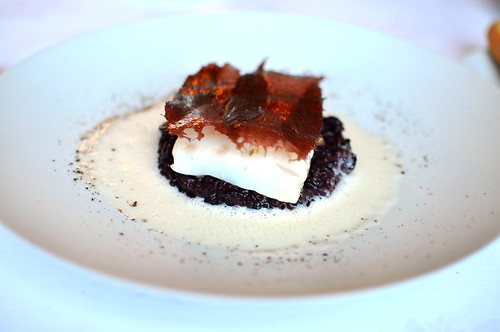 For my main course, I selected the “48 degrees Celsius” sea bass served on a bed of  black rice and mango risotto with coconut sauce (33€). The flavors were totally tropical, while the preparation and plating were still French. The rice and coconut sauce was a touch sweet for my taste, which is saying a lot if you’ve ever met my sweet tooth, but the fish was damn near perfect. The whole shebang was garnished with a tuile céréale. 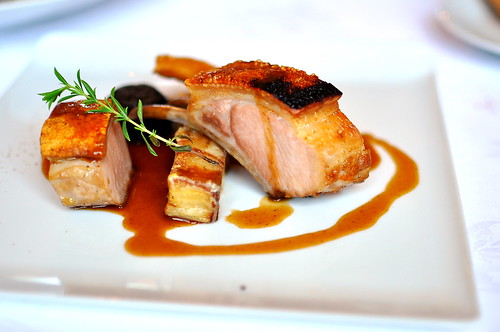 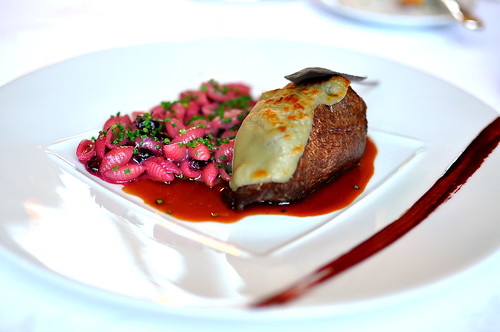 My favorite main course was The Astronomer’s beef filet with an assertive blue cheese and whiskey crust (34€).  On the side was black currant-stained pasta in a butter sauce. 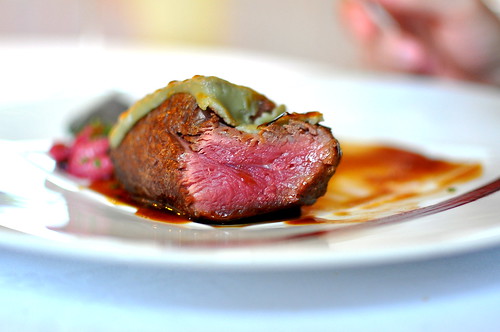 God, that steak was beautiful. 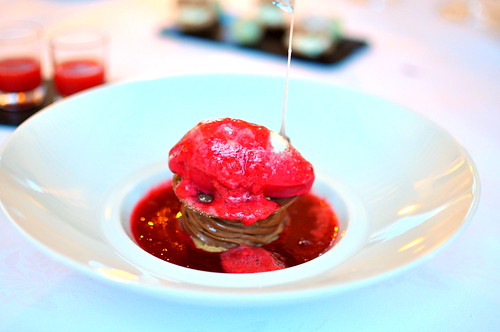 To finish, we shared two desserts. The first one, a caramel shortbread with a sour cherry sorbet and raspberry coulis (18€), didn’t really work for me. The contrast between the sweet caramel and tart raspberry was too jarring. 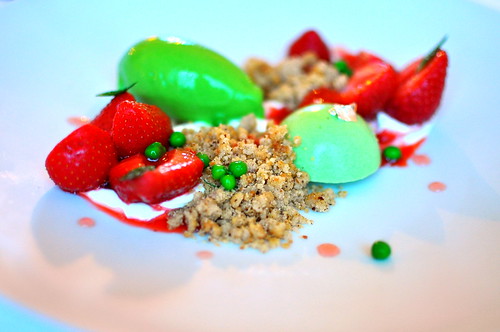 Far more successful and super-duper creative was the pea and mint panna cotta and sorbet with fresh strawberries and peas (18€). Garnishing the plate were a strawberry coulis, creme fraiche, and a hazelnut crumble. The pea panna cotta was admittedly a bit grainy, but I cut it some slack because it was so darn unique. The sorbet, on the other hand, was totally smooth.

I love it when chefs transform savory ingredients into sweet centerpieces. Peas, please. 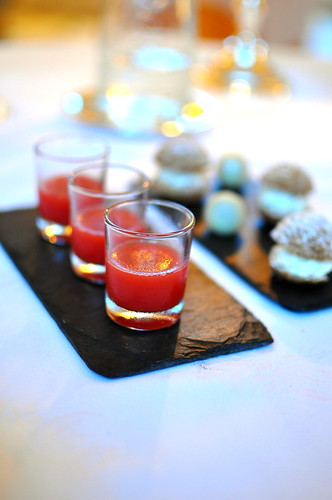 Our final bites of the night were a shot of strawberry gazpacho, vanilla cream puffs with crunchy shells, and white chocolates filled with milk chocolate ganache. The gazpacho went down easiest because we were maxed out.

Château d’Audrieu really came through in a big way. I was hoping for a nice meal away from the hubbub of Bayeux, but what I received was so much more. The cooking was wonderfully creative—sticky rice for dinner and peas for dessert—while the service was a notch above. I’ll be watching this restaurant to see if it snags a few more Michelin stars over the years.