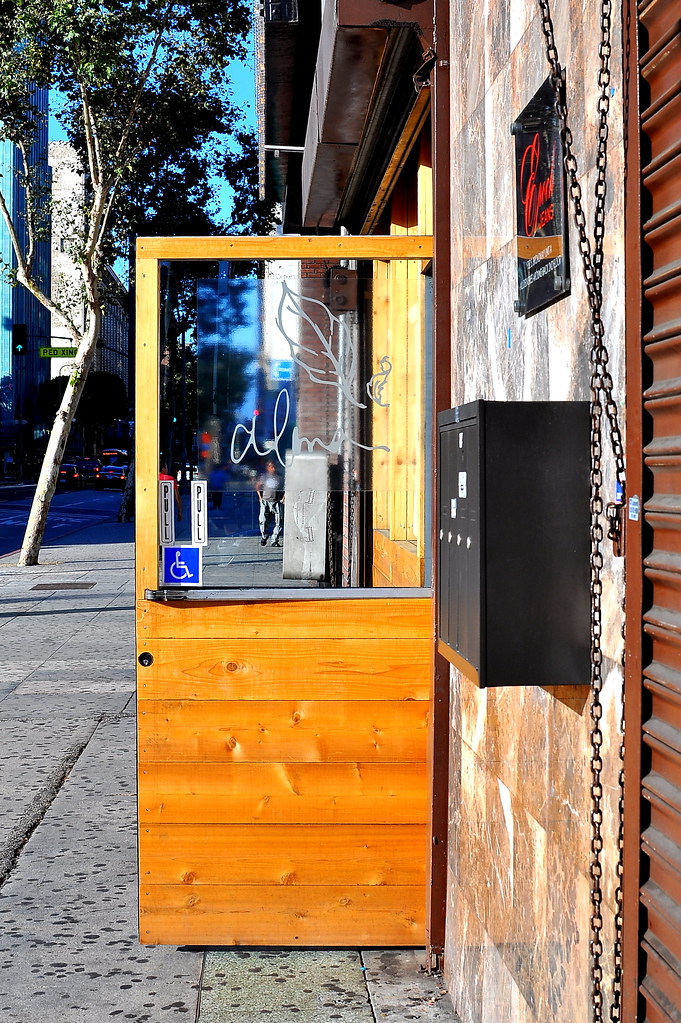 My girl Minh‘s been dying to try Alma, so we booked a table in celebration of her recent birthday. Situated on an unexpected stretch of Broadway, Alma can be difficult to spot. If it weren’t for the fanciful script scrolled across the door, nothing would let on that there’s something good to eat this way. 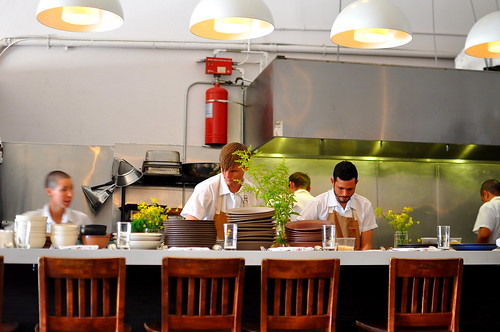 Chef Ari Taymor (dark haired and bearded fella above) opened Alma last March after running a successful pop-up of the same name. Here in this minimally appointed dining room with a tremendous open kitchen, the young chef and his team are creating ambitious and beautiful food that’s globally influenced. The restaurant’s format and style reminded me a bit of Le Chateaubriand in Paris. 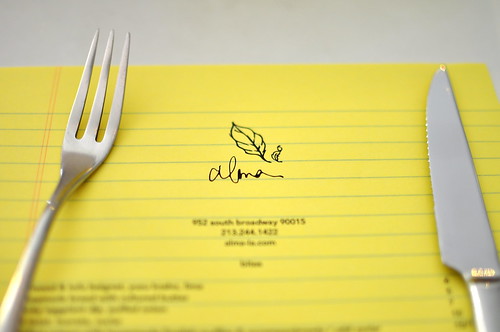 Alma offers both an a la carte menu and a formal tasting menu. Minh’s birthday fortunately fell on a Tuesday, so we took advantage of the abbreviated four-course “Tuesday Tasting” for $45. We also ordered one of every “snack” on the menu to supplement our dinner. The price for the regular tasting menu is $90 for nine courses plus “snacks.” 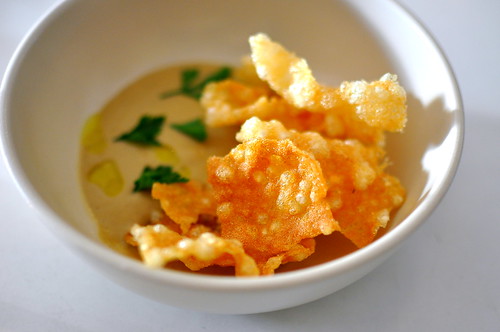 The snacks arrived in quick succession. The “smoky eggplant dip, puffed onion” ($7) offered a fancy take on chips and dip. The puffed onion “chicharones” proved to be a fun and novel vehicle for the smooth dip. 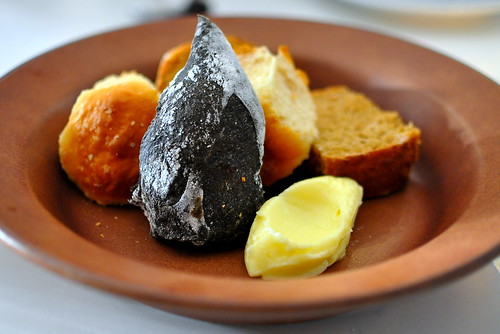 Up next was a platter of “house-made bread with cultured butter” ($5). Three different loaves were on hand tonight: squid ink, pain au lait, and beer bread. The perfectly softened butter made the already good bread something pretty great.

Perhaps the most famous of Alma’s snacks are the “seaweed and tofu beignets” with yuzu kosho and lime ($6). The texture of the beignets was denser and wetter than I had anticipated, but they were still quite tasty, especially paired with the creamy yuzu sauce. 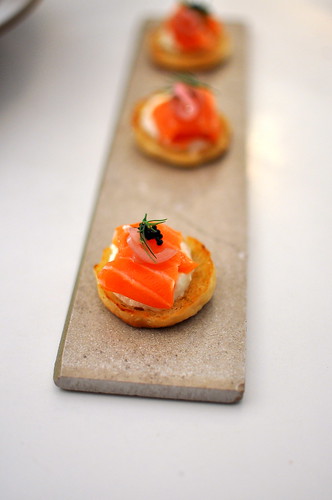 The “smoked salmon with house-made English muffins” ($13) hit the most familiar note of all the small bites. We added caviar for $3 because we’re fancy like that. 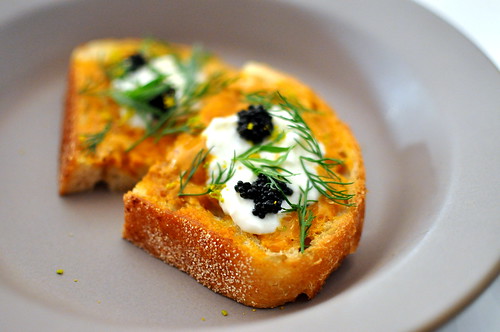 The final snack, “uni toast, burrata, caviar” ($10), was my favorite of the five. I mean, how can you go wrong with sea urchin, burrata, caviar, and really good bread? Tis impossible. 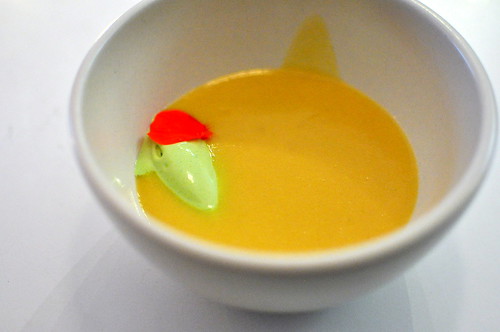 Our four-course tasting began on a really high note. Poured table-side, the sweet corn soup with nasturtium ice cream was simultaneous cold and warm, and all together refreshing. 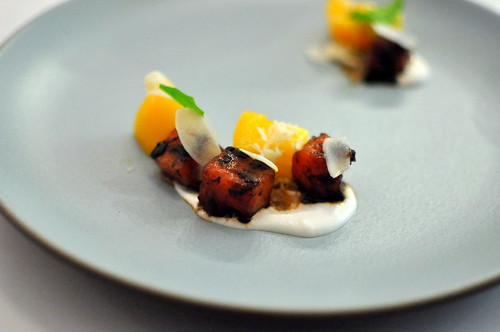 The success of this simply composed dish was contingent on every ingredient being pristine. Unfortunately, several of the plate’s components were not up to snuff tonight. 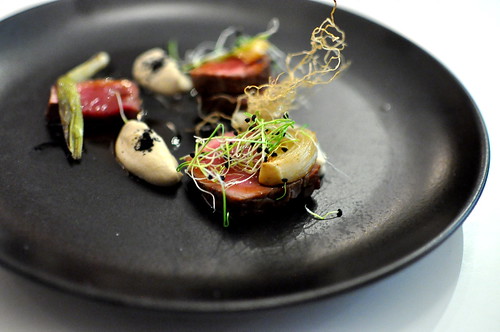 For the main course, I selected the aged New York strip that was cooked to perfection. The accompanying sunflower seed puree was intriguing and equally delicious. 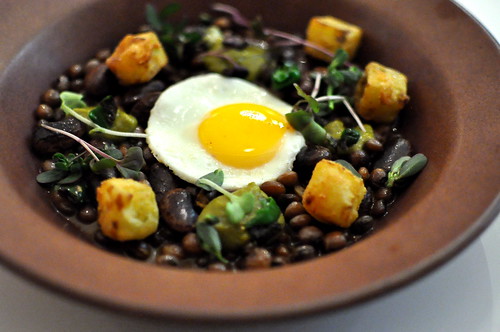 My vegetarian-leaning dining mates selected the shelling bean stew with deep-fried green tomatoes, tomatillo crema, and a fried egg. The few bites that I stole were certainly hearty, but couldn’t quite reach the heights of the steak. 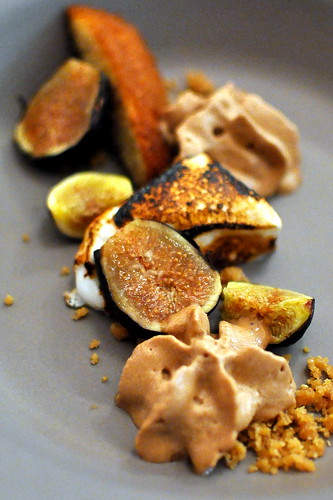 To finish, we ordered one of each dessert on offer. My favorite featured fresh figs, pu-erh, brown butter madeleines, toasted marshmallow, and a pine nut brittle. The tea-tinged espuma was my favorite element on the plate. 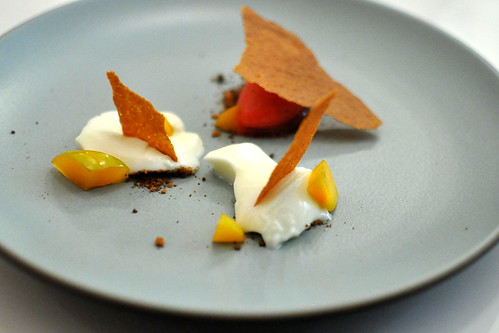 Minh’s birthday offered the perfect excuse to introduce a lil’ fine dining into my steady diet of San Gabriel Valley dives. I certainly wouldn’t hesitate to return again to celebrate a milestone or to treat The Astronomer or my mom to a “nice” dinner out on the town. Alma’s that kind of a place, at least for me.

UPDATE: “Alma Is the Best New Restaurant in America” according to Bon Appetit. Nice!