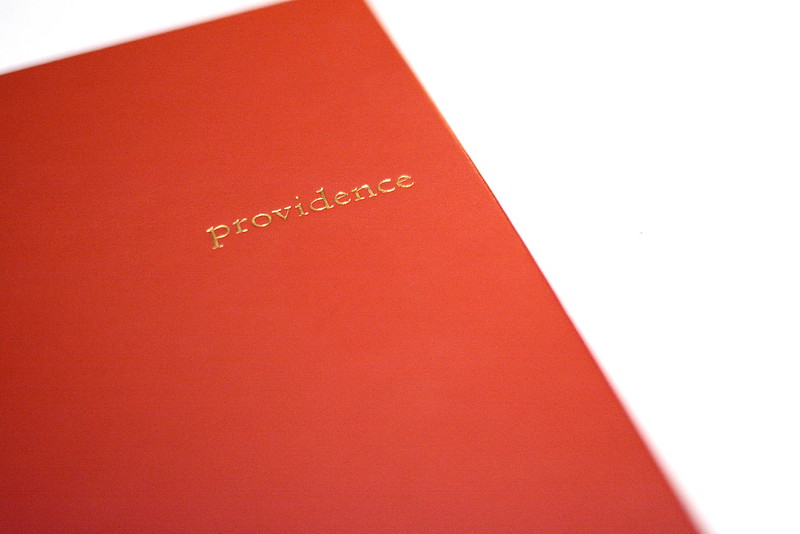 I was spoiled to pieces on my 35th birthday. In addition to heaps of noodles with colleagues and a made-from-scratch blood orange upside-down cake baked by The Astronomer, I was treated to dinner at the nicest place in town: Providence.

The last time The Astronomer and I dined here was back in 2010 for an eight-course dessert tasting. And before that, it was in 2009 for The Astronomer’s birthday. It felt really good to be back. 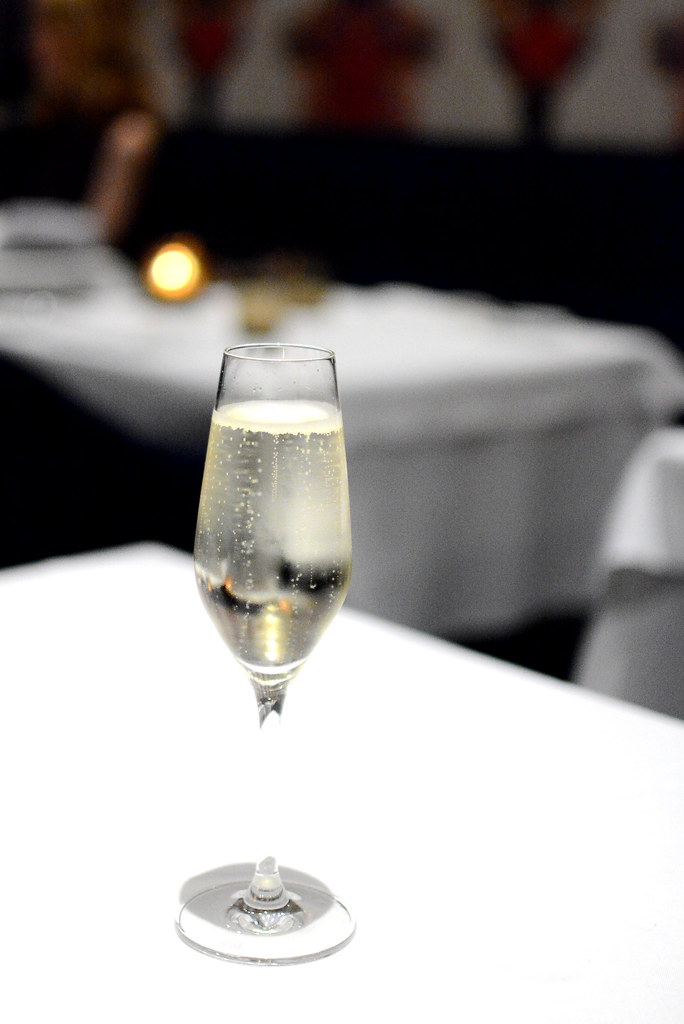 Dinner began with a glass of bubbles for me… 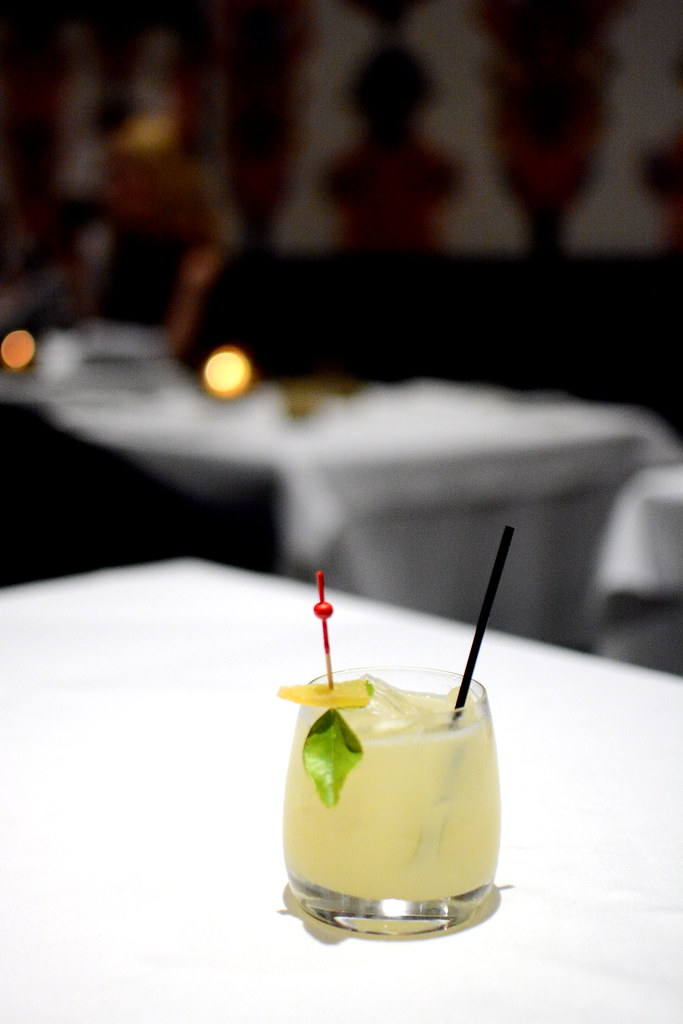 …and a Muay Thai cocktail ($12) for The Astronomer. Both were festive, setting the proper tone for the evening.

Providence offers three menus during dinner service—the Providence Tasting Menu ($120), Signature & Seasonal Menu ($185), and Chef’s Tasting Menu ($220). We decided to go for the Chef’s Tasting this evening because fancy dinners are a rare treat, so why not go for gold? Also, the promise of squid phở was too intriguing to resist. 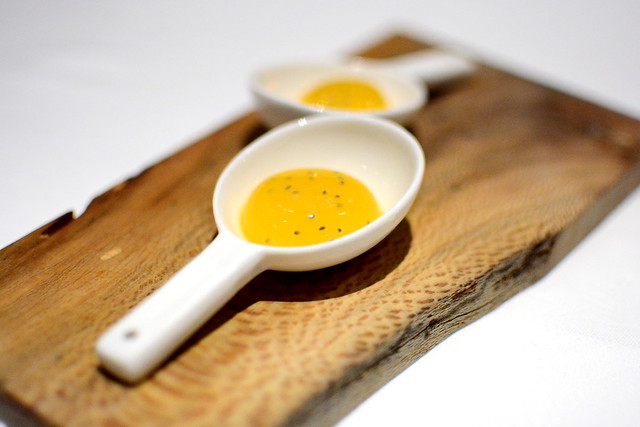 Before the tasting menu officially began, we were treated to a parade of small, delightful bites. First up was a refreshing spherified passion fruit pisco sour with basil seeds. 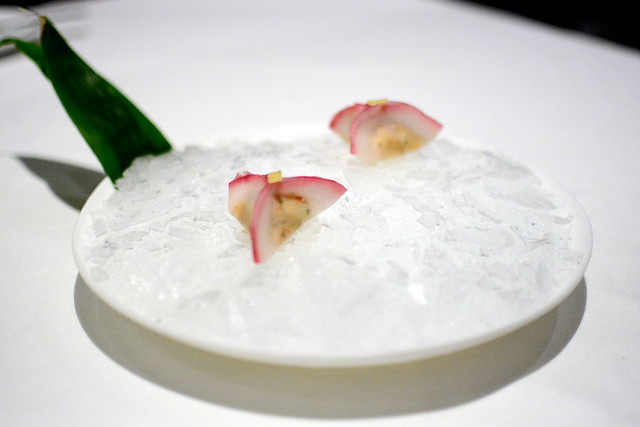 Lobster ravioli wrapped in radish and served over ice arrived next. While I was initially skeptical about radish filling in for dumpling wrappers, I needn’t have worried; this was a one bite wonder. 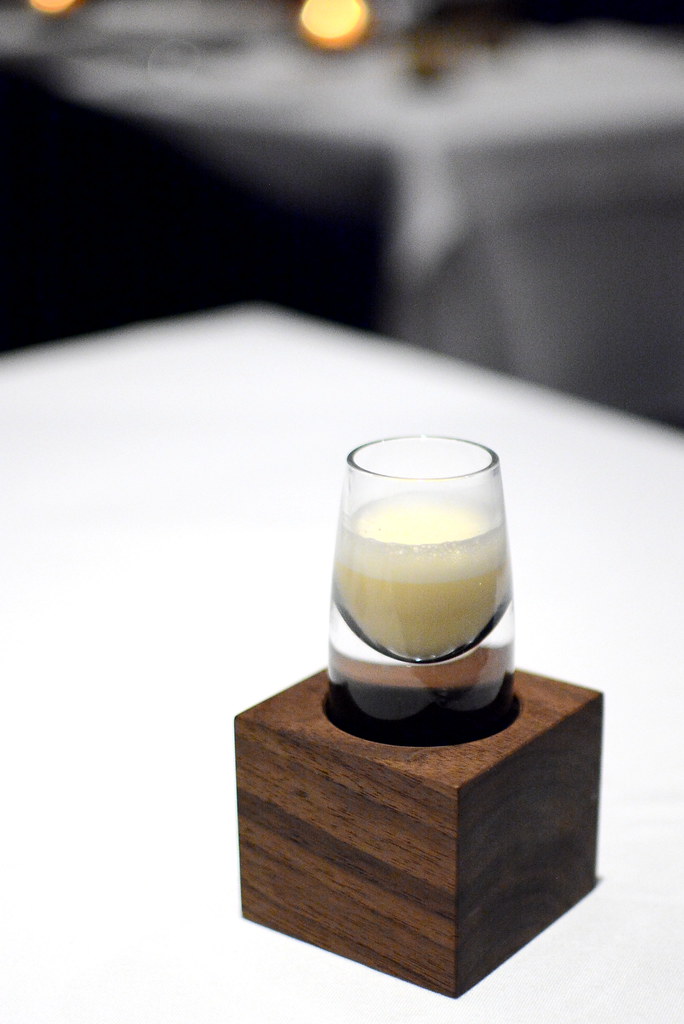 Next we were treated to warm, creamy shots of mussel soup. 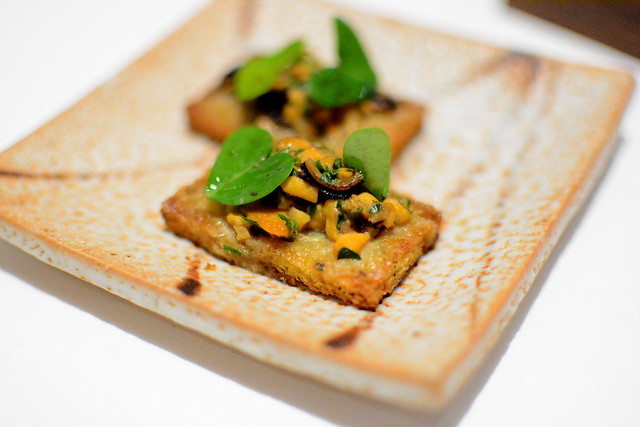 The soup was accompanied by roasted seaweed focaccia topped with mussels. 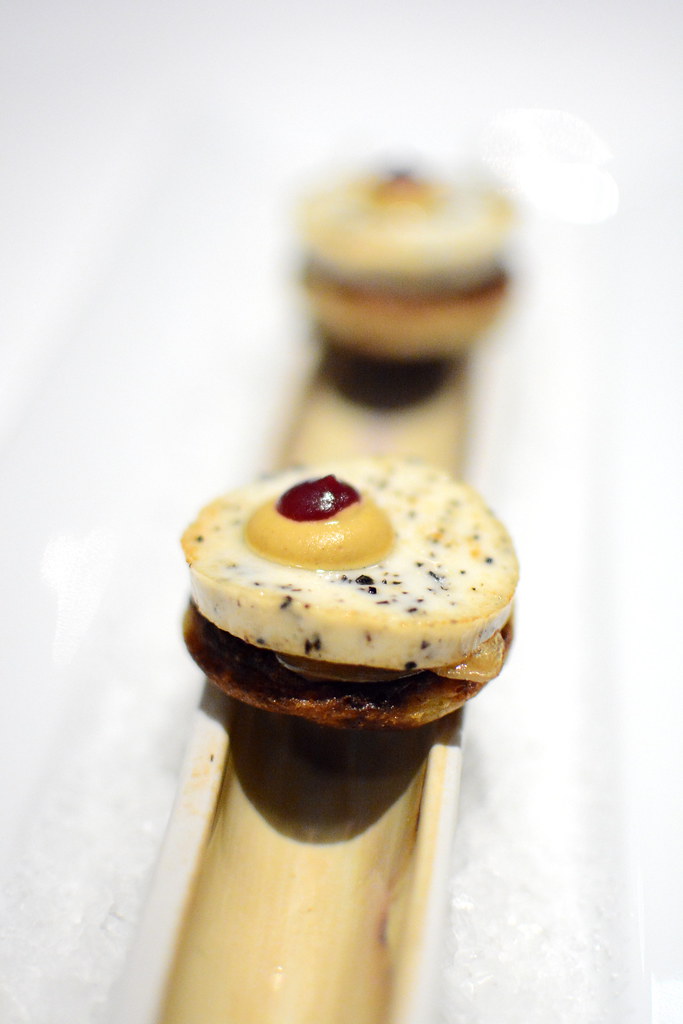 The penultimate small bite consisted of a blini layered with a slice of black truffle scallop sausage. Little puddles of mustard and sauerkraut added the finishing touches. I was taken aback by the sausage’s delicate texture. Who knew scallops made for such great sausage? Chef Michael Cimarusti, that’s who. 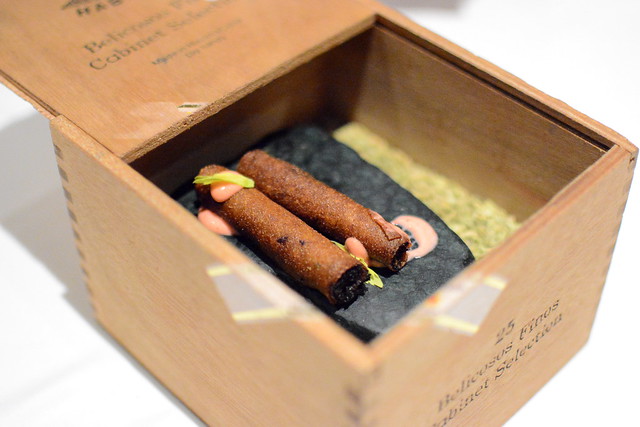 And finally, puff pastry cigars filled with shredded Wagyu. A crisp, rich, and satisfying conclusion to the array of starters. 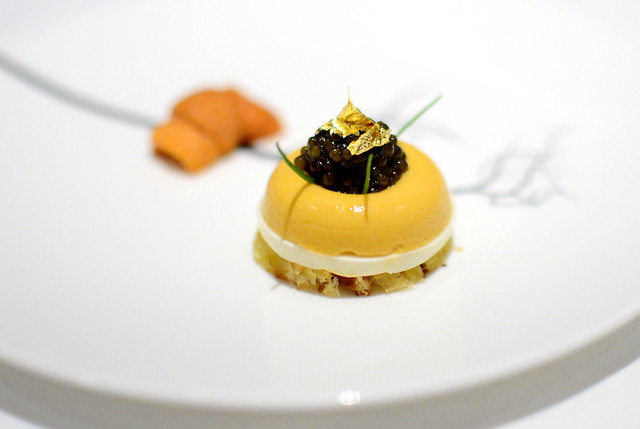 Next to follow was a silky sea urchin and champagne parfait topped with golden osetra caviar and gold foil. Lemon custard played foil to the avalanche of luxe, oceanic flavors. And the uni tongue served on the side was a major bonus. 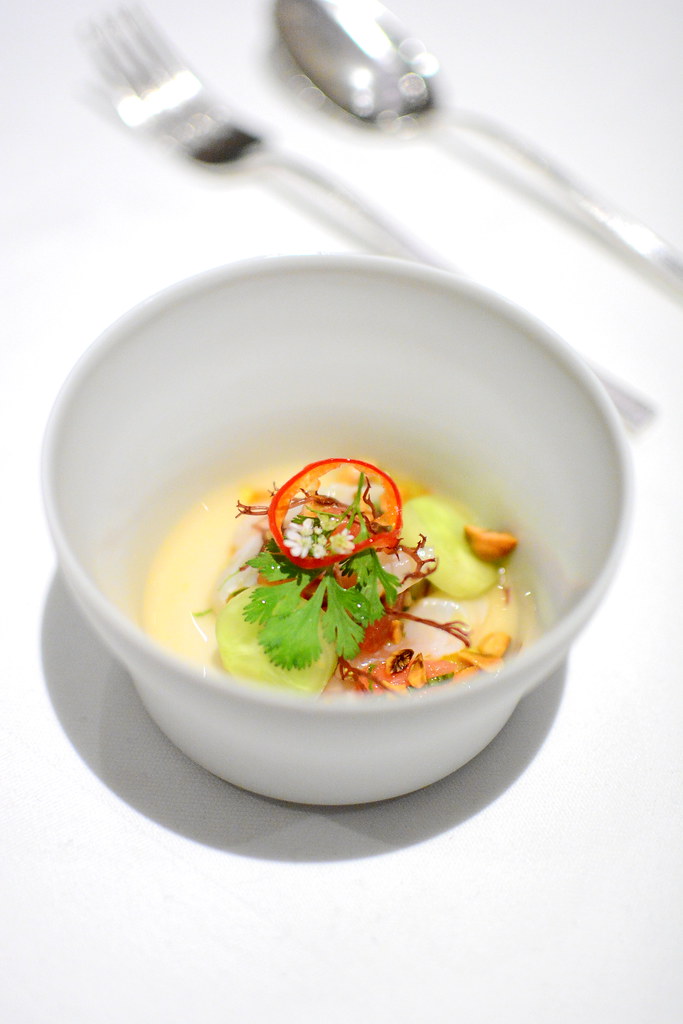 The geoduck, thinly sliced with a toothsome bite, was prettied with cucumbers, hazelnuts, cara cara oranges, and Fresno chilis. So light, so bright, so good. 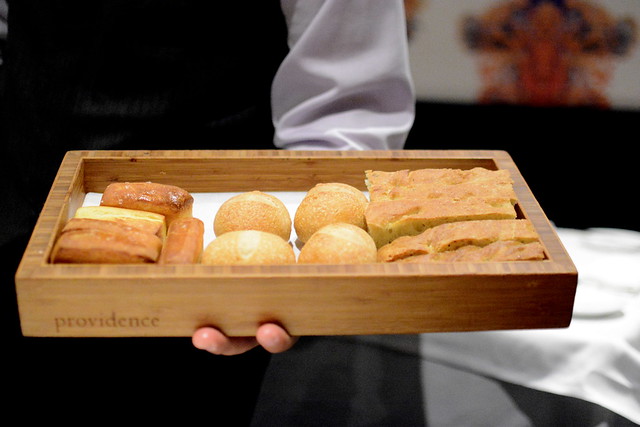 The bread course came next. We pounced on all three varieties on offer: seaweed foccacia, brioche, and white rolls. Served alongside was unsalted butter from Normandy. The plain ol’ white roll was my favorite because it paired so simply and perfectly with the butter. 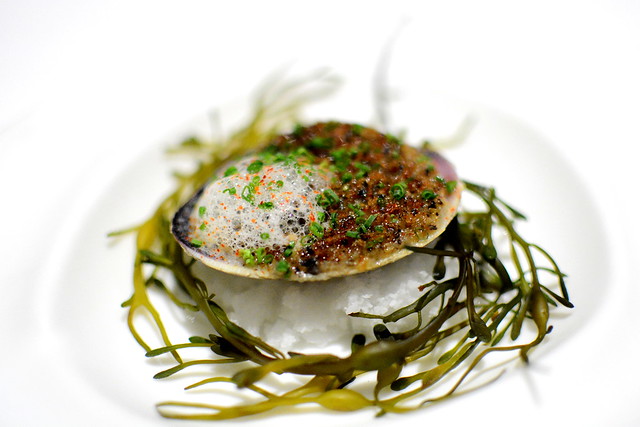 The next course benefited from having some bread at the table for sopping: baked top neck clams with browned butter, brioche breadcrumbs, chives, black truffle, and shallots. Talk about slurp-able satisfaction. 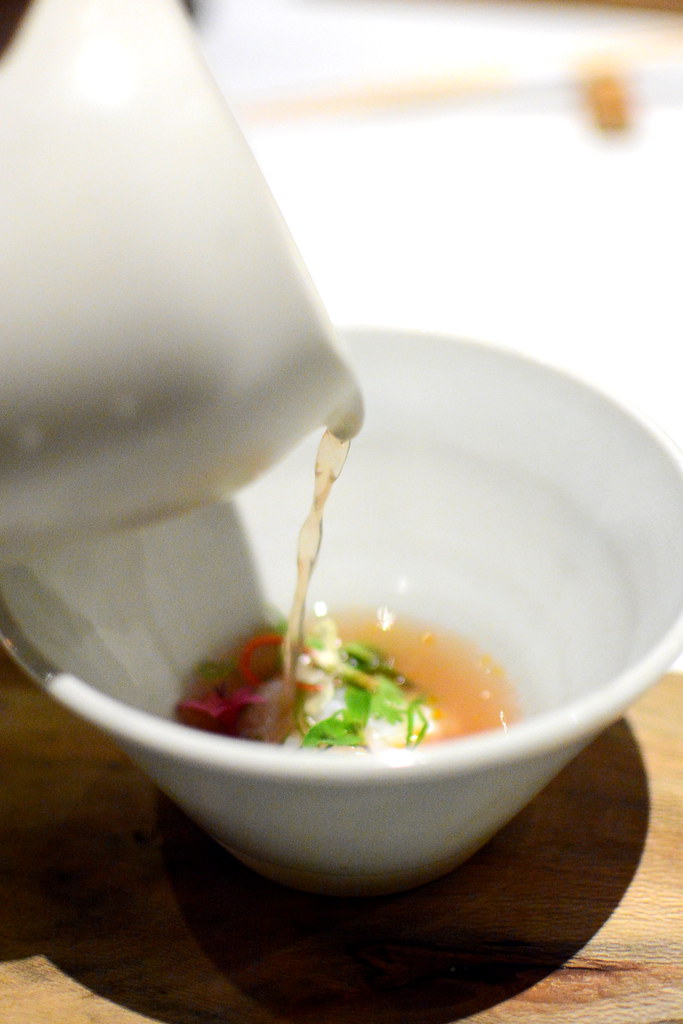 The highly-anticipated squid phở was next on the scene. The squid broth, fragrant and spot-on, was poured atop the raw squid “noodles,” Thai basil, and Wagyu table-side. We gleefully ate each squiddy strand with the provided chopsticks. This was a whimsical and tasty interpretation of Vietnam’s most famous dish. 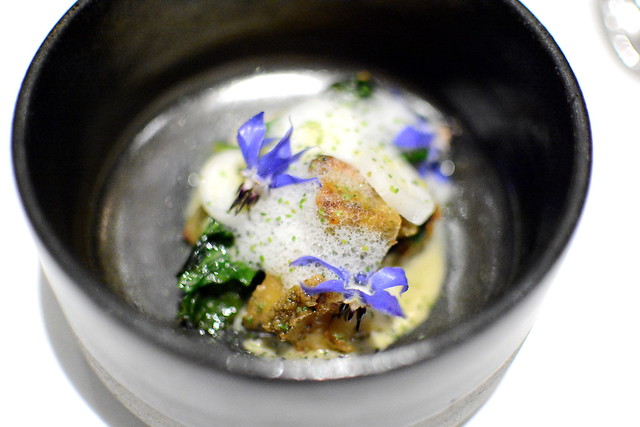 And then there was braised abalone from Hawaii served atop an earthy eggplant purée with turnips and nori. The texture of the abalone, caramelized and a bit chewy, was immensely satisfying. 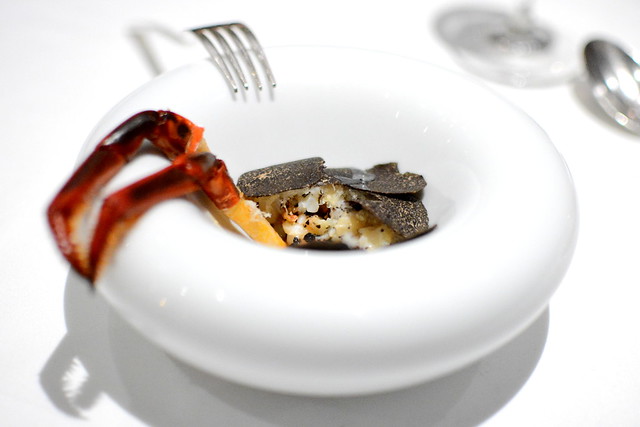 The spiny lobster with shaved macadamia nut and black truffle took the decadence quotient up a notch. Served on the side was a warm lobster consommé that contrasted beautifully with the rich and buttery lobster flesh. 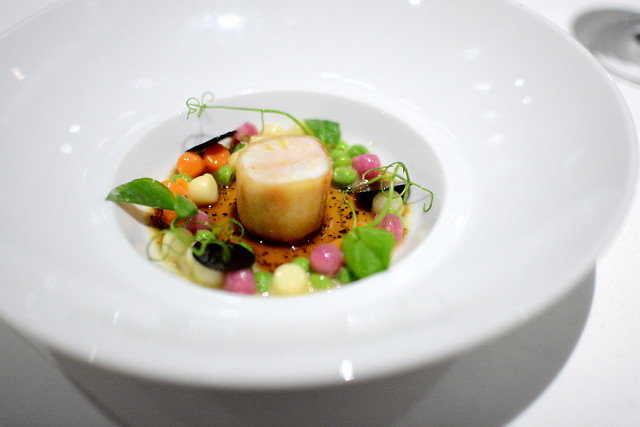 Wrapped in an unbeatable combination of lardo and feuilles de brick, the wild striped bass was sublimely cooked. The sauce, a black truffle reduction, along with the root vegetables, English peas, and shaved black truffle, paired wonderfully with the fish. So, so good. 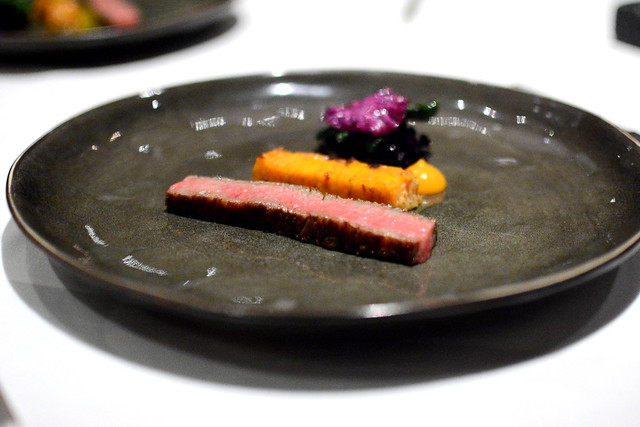 The final savory course, a gorgeous cut of A5 wagyu beef, was accompanied by a Tahitian squash terrine, pickled shiitake mushrooms, kale, and eggplant. While the meat of the matter was quite spectacular, it was the terrine that impressed with its unexpected layers of wagyu cracklings and miso. 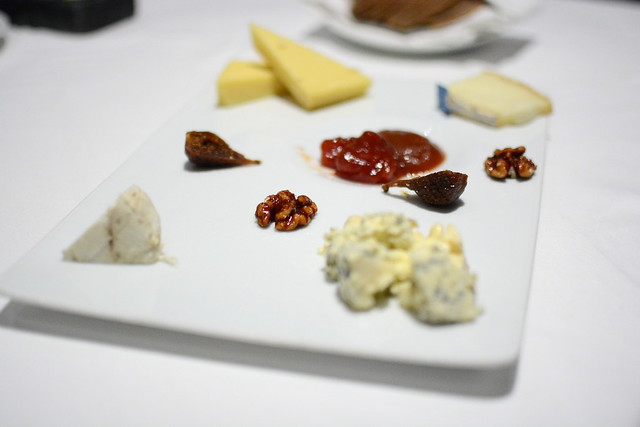 The Astronomer and I were very much stuffed by the time the cheese cart rolled up. Our waiter selected four favorites from the trolley: a two-year aged comte (made by “Butter Master Jerry” in Normandy), a cow’s milk bleu injected with white wine (also made by “Butter Master Jerry”), an O’Bannon goat cheese from Indiana, and a sheep’s milk cheese from Italy (poetically referred to as “sheep clouds”).

The cheese was served with persimmon and guava jams, dried figs, candied walnuts, and slices of walnut bread. 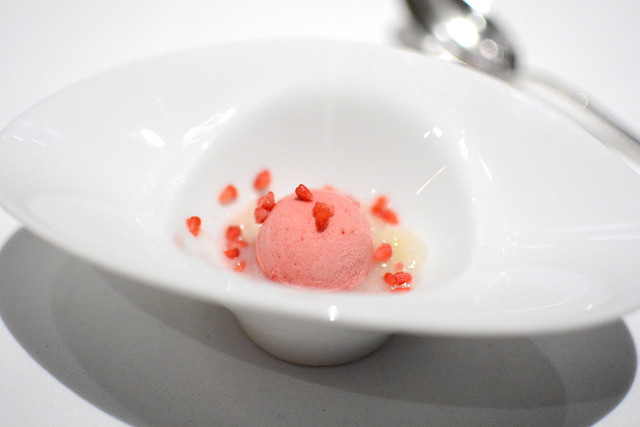 To cleanse our palates: a most refreshing lychee rose granita with raspberry semifredo and dried raspberries. 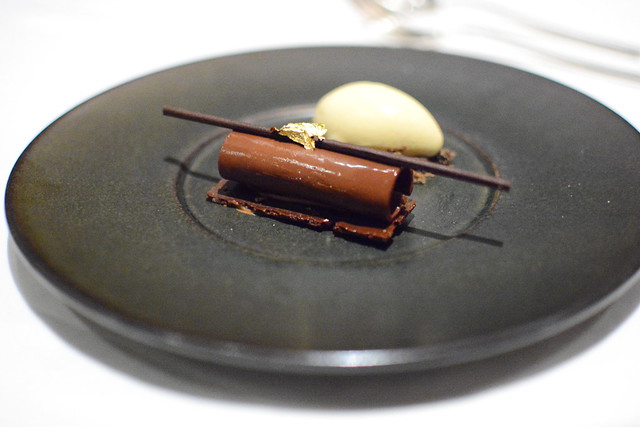 The second dessert featured an Earl Grey cake enrobed in chocolate ganache with barley ice cream and barley streusel. Every bite was smooth, rich, and not too sweet. 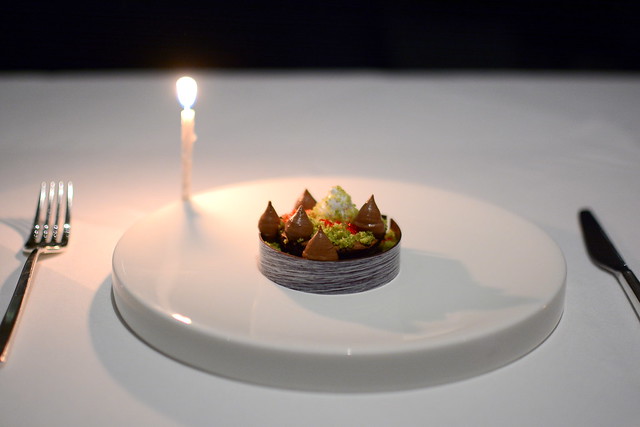 The last bite of the night came with a birthday candle: a chocolate brownie adorned with peppermint-tinged chocolate mousse, peppermint candy crumbles, and marshmallow. The dessert’s cool, minty edge made it go down easy even though we had already had plenty to eat. 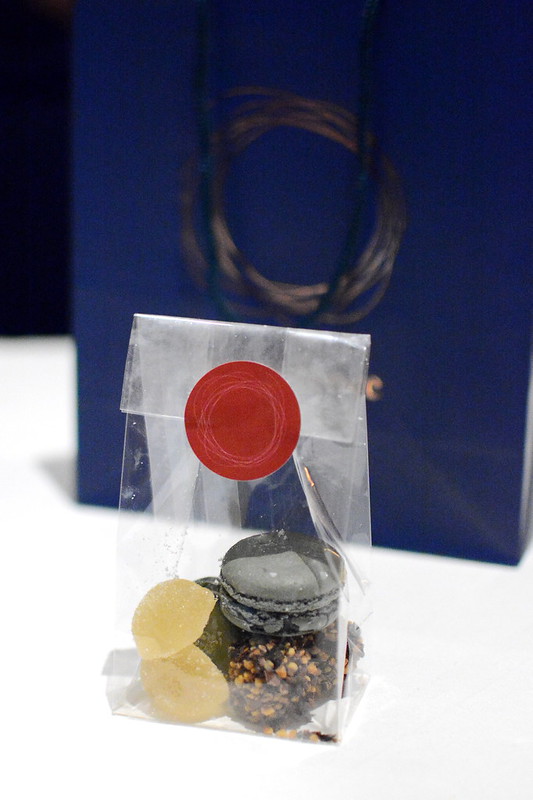 To go, a bag of mignardises and two banana muffins for the morning.

The Astronomer and I were thoroughly impressed with the Chef’s Tasting at Providence. The service was outstanding, while the food wowed from beginning to end. We were delighted by the thoughtfulness and creativity behind each dish; every course brought standout flavors and interesting compositions. We just might have to do this again next year.