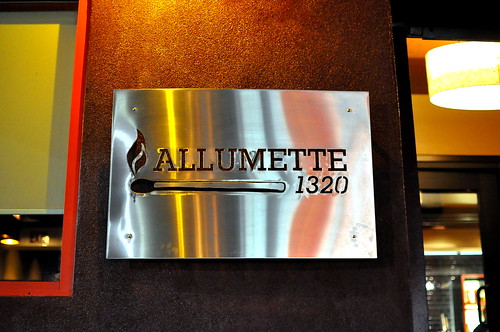 Chef Miles Thompson, who launched The Vagrancy Project last summer, has found a permanent home in Echo Park in the building formerly occupied by Allston Yacht Club. During his twice-a-week pop-up in this very space, the former executive sous chef at Son of a Gun dazzled diners with creative and beautifully plated fare like John Dory with boba, miso, and shiitake and chorizo with grapefruit and Robiola on toast.

While the culinary residency was short lived, it managed to catch the attention of Allston Yacht Club’s owners Bill DiDonna and Charles Kelly. Allumette is a joint venture between the two seasoned restauranteurs and the young chef. Consider this pop-up completely permanent. 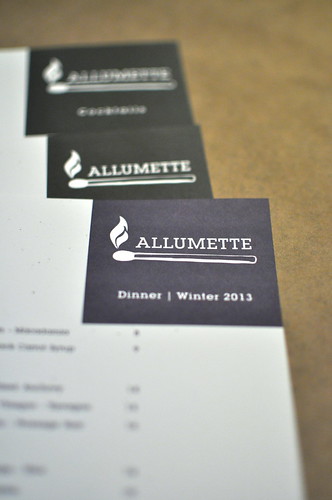 Allumette’s forward-thinking menu is comprised of two dozen small and thoughtful plates that fall under the categories of “Vegetable,” “Pasta,” “Fish,” “Shellfish,” “Meat,” “For Two,” and “Dessert.” Diners are encouraged to either indulge in the Chef’s tasting menu or select 4 to 6 dishes to create their own tasting experience.

I, along with my dining companions Darin, Pat, and Christina, decided to go the family-style route in order to taste as much of the menu as possible. In certain instances where a dish was literally a bite or two, we doubled, tripled, or quadrupled our order as needed. 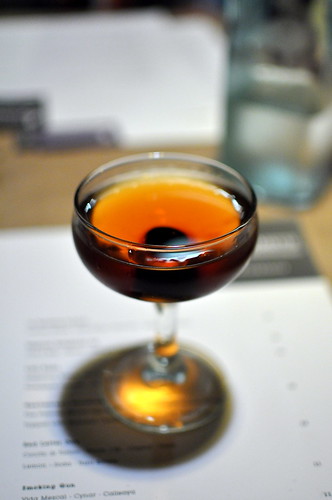 Before diving into the food, we sampled a few cocktails crafted by Serena Herrick. I selected the “Smoking Gun” ($11), a super-strong brew comprised of Vida mezcal, Cynar, and Calisaya. Since The Astronomer wasn’t around to tow me home safely, I kept my sips to a minimum. 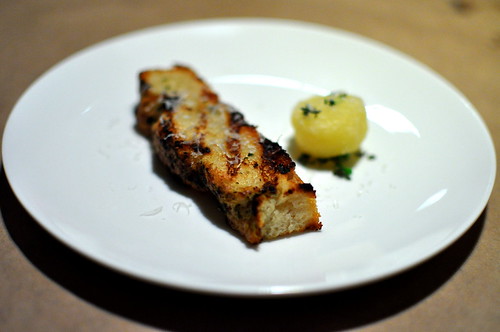 My favorite bite of the night was the complimentary bread course—a spear of grilled and buttered focaccia served alongside a thyme- and mascarpone-infused “tater tot.” While the Chef may have intended for the latter to be slathered upon the former, I enjoyed each component separately, with each rich bite balanced by bread and char. 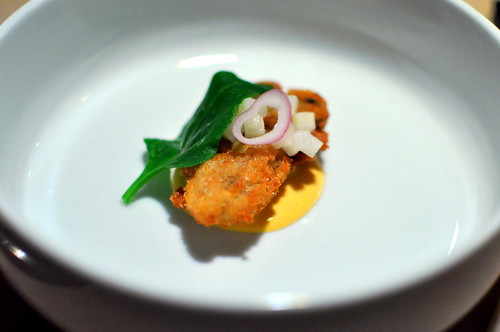 Next came a “Fried Oyster” ($6) sitting in a neat pool of kimchi ranch dressing and topped with an Asian pear mignonette and “sea spinach.” This two-bite delight had a little bit of everything going for it—crunchy, briny, creamy, spicy, and tangy. 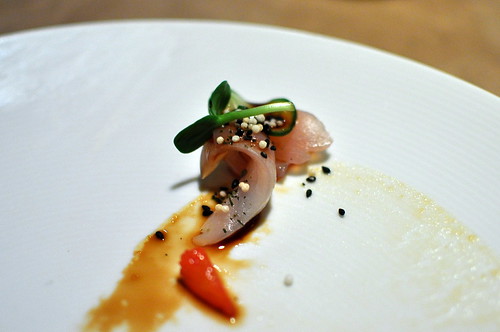 We selected two raw preparations from the “Fish” portion of the menu. The first, the “Shimaaji Sashimi” ($14), was prepared with mustard miso, rice crackers, blood orange, and kiwi. 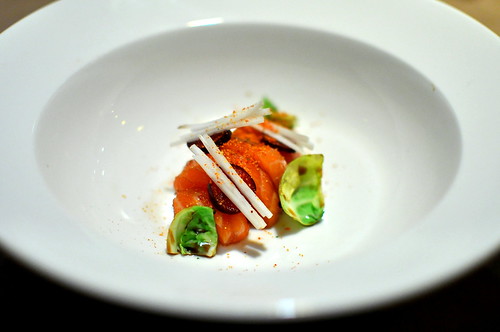 While the Shimaaji was pleasant with its bright and fruity accoutrements, I preferred the Ocean Trout’s slightly more assertive ponzu and pickled grapes. 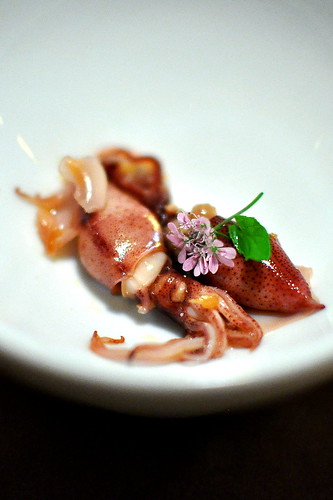 At this point in the meal, we were treated to an intermezzo course of itty bitty squid marinated in lime juice. Delectable. 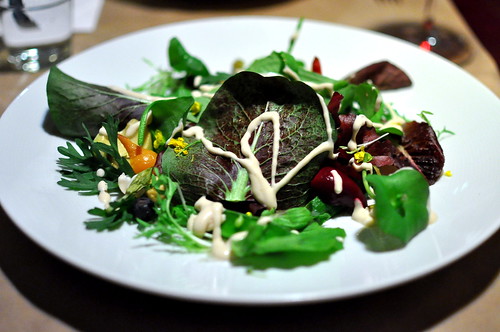 From the “Vegetable” section of the menu, we sampled both salads on offer. The Bitter Lettuces ($8) were accompanied by tangerines, avocado, macadamia nuts, and my favorite element, a smoked soy cream. 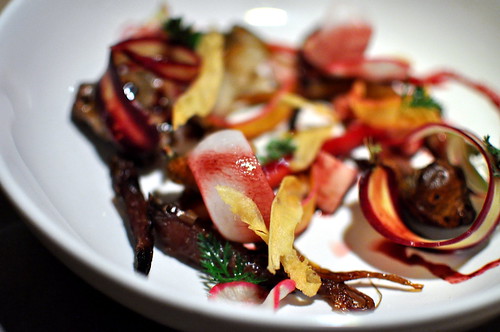 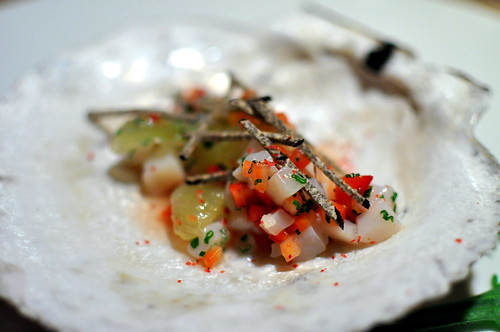 At the insistence of our waiter, we also sampled the latest menu addition, a Hokkaido Scallop Tartare ($17). The scallops mingled harmoniously with the fresh strawberries, black truffle, citrus, and elderflower. The portion here was quite small, which left me wanting just a little more… 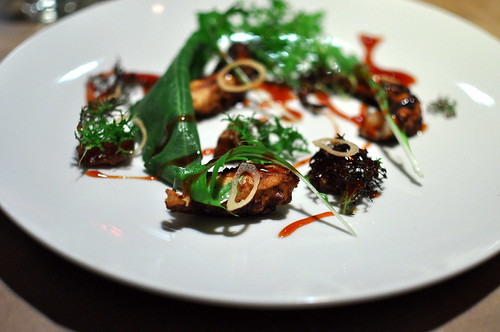 One of the dishes I was most looking forward to tasting was the Grilled Octopus ($19) served with sour apple syrup, cardamom butterscotch potato, and sorrel. While Pat found the garnishes and sauces to be a touch too sweet, I was quite happy with the overall effect. In fact, I could’ve gone for an even more assertive application of apple and cardamom. 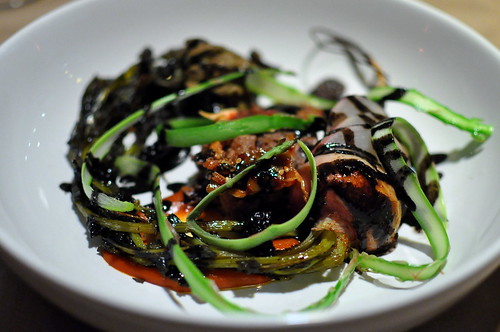 While the Warm Lamb Neck Terrine ($14) sounded intriguing as heck on paper, the plated dish resembled more or less a standard braised short rib. The vinegar-roasted turnips and crunchy Korean crabs served alongside managed to outshine the protein. 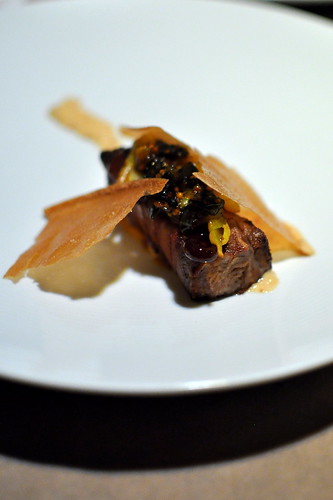 The Pork Shoulder ($16) was the more successful “Meat” offering this evening. The tender shoulder meat came wrapped in bacon, topped with caramelized onions, and accented with feuille de brick. According to our waiter, this dish was inspired by bacon-wrapped hot dogs. 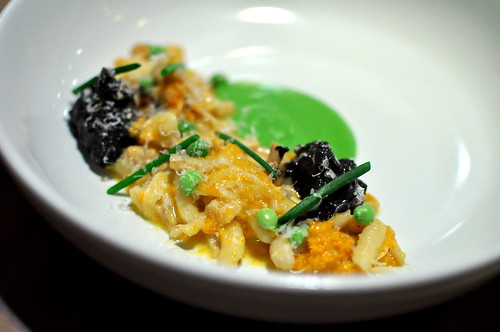 For the final savory dishes we were able to taste two of the three offerings from the “Pasta” portion of the menu. The house-made Cavatelli ($16) came dressed in a sea urchin ragu with an English pea purée, poached mushrooms, and fromage noir, a smooth and tangy cheese dyed black. The noodles were too well-done for me tonight, unfortunately, but the trio of sauces had everything going for them. 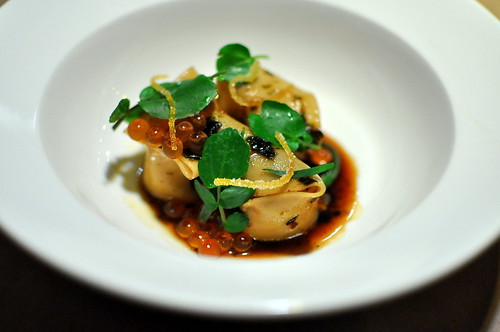 I quite adored the Szechuan Pork Dumplings ($14), especially in tandem with the cured salmon roe and spicy black vinegar. The dumplings’ wrappers were wonderfully toothsome. 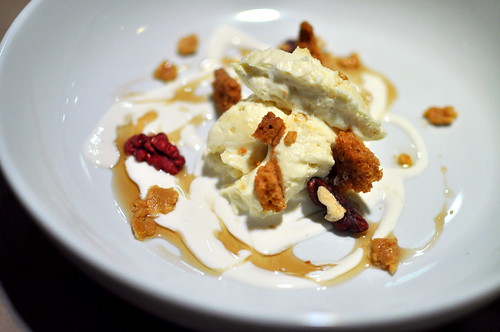 To finish, Chef Thompson sent out one of each dessert. The all-around favorite was the Cheesecake Mousse ($7), a luscious and silky lil’ number accompanied by frozen cookie dough, red walnuts, and maple syrup. 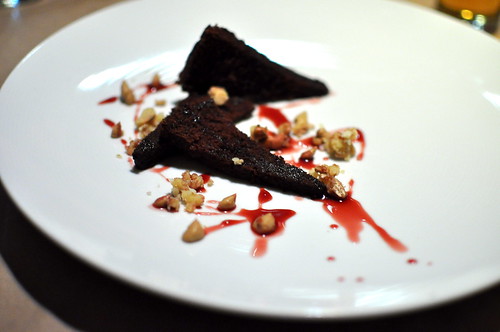 I was mostly lukewarm regarding the Red Velvet Cake ($7) with port syrup. When I conjure up an image of red velvet cake it’s always multi-layered, bright red, and frosted with cream cheese. Allumette’s rendition was too understated for my expectations and taste. 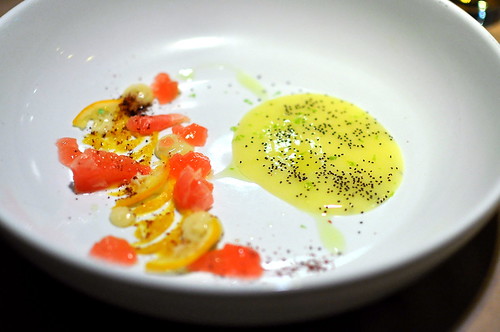 And finally, a Citrus Curd ($7) sprinkled with poppy seeds and paired with a rhubarb-lime gelée, grapefruit segments, and kumquats. This bracingly bitter and sour dessert was right up my alley.

While my meal at Allumette wasn’t without flaws, there were more than enough enticing elements to encourage me to return at a later date to see how Chef Thompson grows and develops in this new space.