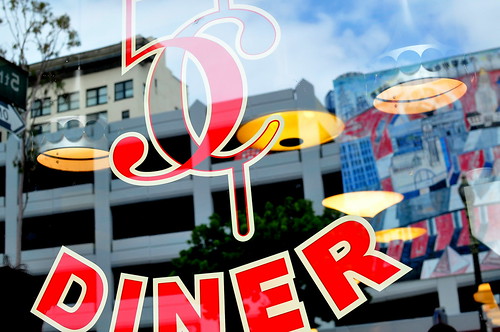 After binging on Seattle‘s superb doughnuts in early March [See: Top Pot, Dahlia Lounge, Frost], I arrived home with a keen interest in finding Los Angeles’ choicest deep-fried morsels. While attempting to relive the past usually ends in disappointment, I had faith in my dear city. After all, with independent doughnut shops occupying every other block, there are bound to be some delicious finds, right? 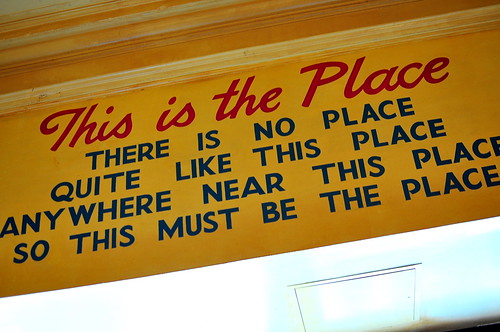 The great doughnut hunt began at downtown’s Nickel Diner, home to one of the city’s most beloved doughnuts. The Astronomer and I brunched here with my gal pals Bex and Laurie days after pastry chef Sharlena Fong announced that she would be leaving the establishment. Even though Chef Fong was no longer in the kitchen when we dined, every sweet had her down-home and quirky stamp on them. 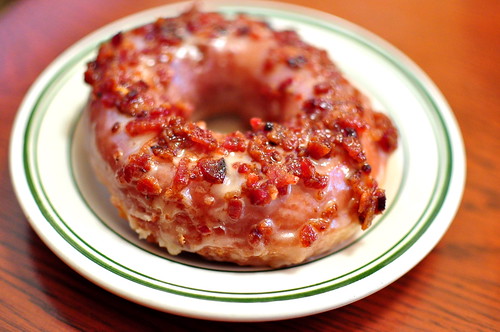 While The Astronomer and Laurie ordered sensible brunch items like huevos rancheros and French toast, Bex and I went hog wild over doughnuts. The infamous maple-bacon was the first to arrive. Coated in a sweet glaze and studded with bacon crumbles, the doughnut looked absolutely delectable. While I was hoping for fireworks at first bite, all I got were a few measly sparks. The icing and bacon were a winning combination, but the doughnut’s texture sat awkwardly in between fluffy and cakey. A lighter and more delicate doughnut would’ve sealed the deal for me. 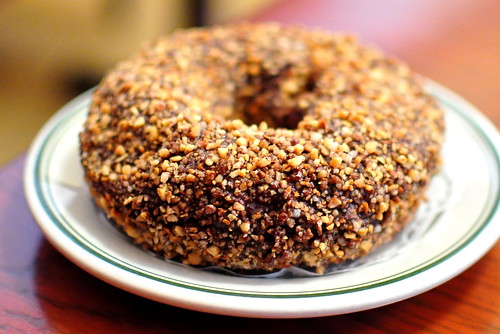 Unfortunately, the bulk of the restaurant’s doughnuts are based on the same plain doughnut as the maple-bacon. As a result, I liked everything about the Nutella doughnut but the actual dough. The crisp outer layer of hazelnuts and Nutella was delightful. 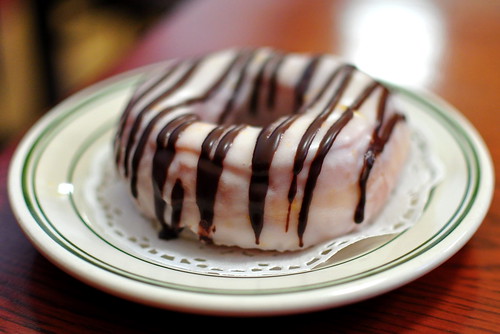 The Clockwork Orange doughnut was also held back by the weak plain doughnut. Although essence of orange was apparent in the icing, it was totally lacking in the batter—a little zest would’ve gone a long way. 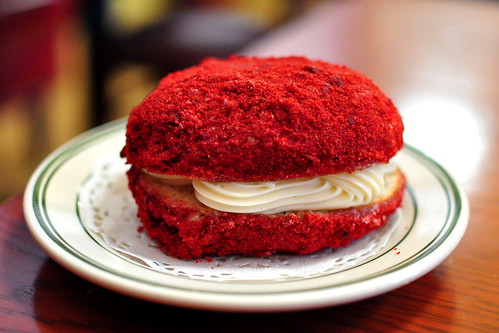 The red velvet doughnut took me by surprise with its unique texture and tangy cream cheese icing. Whereas the other doughnuts were  texturally one dimensional, this one was coated in a crunchy crust of red velvet cake crumbs. Its shape reminded me of The Donut Man’s strawberry doughnuts.

Nickel Diner’s doughnuts are certainly interesting, but the less-than-stellar principle dough keeps each creation from reaching its full potential. Perhaps the new pastry chef will tweak the recipe now that Chef Fong is out the door. While I normally don’t remark on service, it must be noted that an extremely rude manager essentially told our group to get lost after we paid the bill. There’s a polite way to say just about anything; it was a shame that she couldn’t be bothered to use her manners.