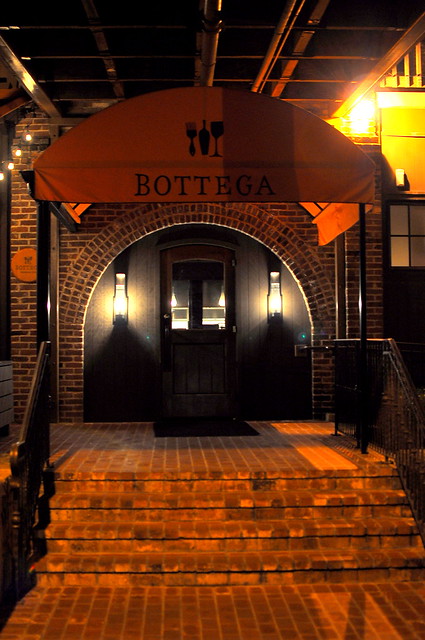 After spending several days in The Bay visiting loved ones and dining at some spectacular local spots, The Astronomer and I traveled to Wine Country for more of the same. We haven’t been back to the area since celebrating our engagement at The French Laundry in 2009, but the scenery and spirit of the place was just as lovely as we remembered it.

On our first night in town, The Astronomer and I snagged two seats at the bar at Chef Michael Chiarello‘s three-year-old rustic Italian eatery Bottega. I had tried to make a proper reservation a few days earlier, but the entire restaurant was fully booked. Fortunately, we didn’t wait but five minutes before two stools opened up. 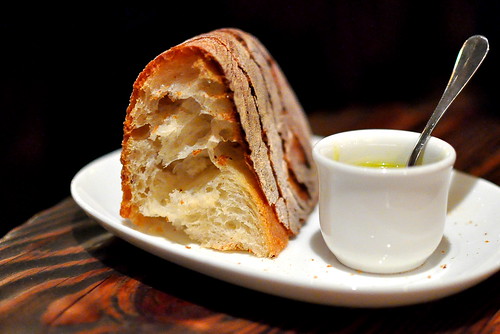 While we perused the menu and wine list, our waiter dropped off some white bread along with a garlic- and cheese-infused olive oil. It’s been a while since I’ve encountered bread service worth going gaga over, but Bottega’s was really outstanding. The bread was crusty without scarring the roof of my delicate mouth, while the olive oil was just plain addictive. Even though we had a feast ahead of us, seconds were requested and immediately devoured. 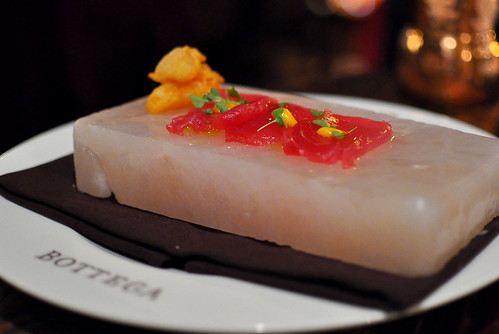 To start, I picked the pesce crudo—“market fresh raw selection from the sea.” The day’s offering was Big Eye tuna served with spicy micro greens and deep-fried satsumas ($13). I liked the dish well enough, but thought the portion size was ridiculously small. The tempura-battered mandarin segments were the most exciting element on the slab. 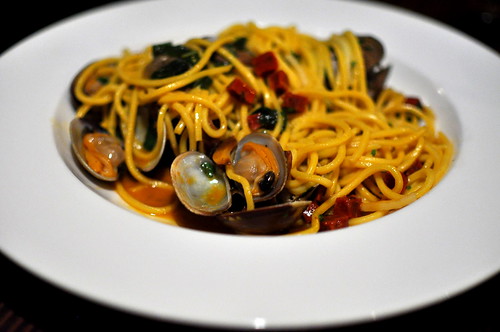 To make up for the skimpy starter, the subsequent courses were portioned generously enough to satisfy two hearty eaters. Our first pasta course was the hand-cut egg linguine with Manilla clams, Calabrese sausage, garlic, basil, parsley, and white wine ($17).

The toothy noodles were definitely to my liking, although The Astronomer felt that they bordered on undercooked. The clammy broth coated the strands lightly but effectively. 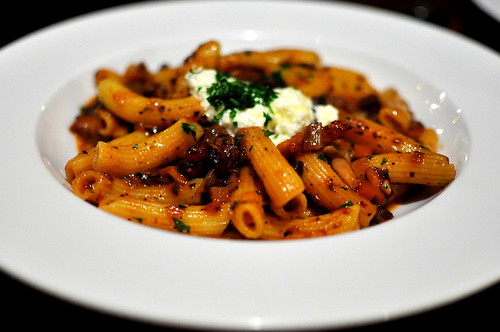 Pasta course number two was the house-made rigatoni, sauced to perfection with a tomato-braised Sonoma rabbit and wild mushroom gravy ($18). The dish was topped with a creamy spoonful of house-made ricotta. Braised meats paired with handmade pastas is the very definition of comfort in my book. 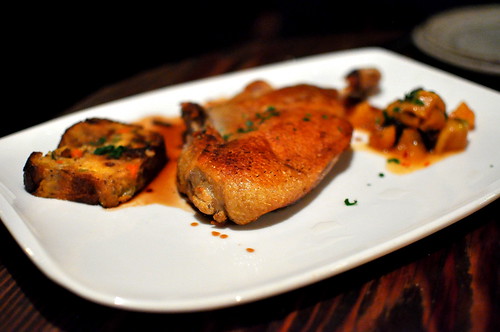 We could’ve walked out of Bottega quite content after the pastas, but decided to share half a duck to prolong the good times. The “Confit of Half Duck” ($28) was served with mostarda di frutta (fruit compote) and panettone bread pudding. The duck’s skin was taut and crisp, while its meat was juicy and tender. The sweet and fruity sides brought balance to the dish. 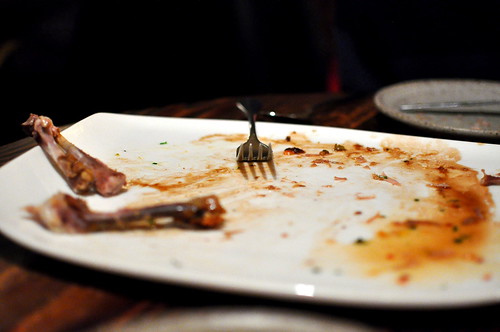 This is what the plate looked like twenty minutes later. We liked the duck. A lot.  In fact, The Astronomer declared that it was the best duck he had ever eaten. 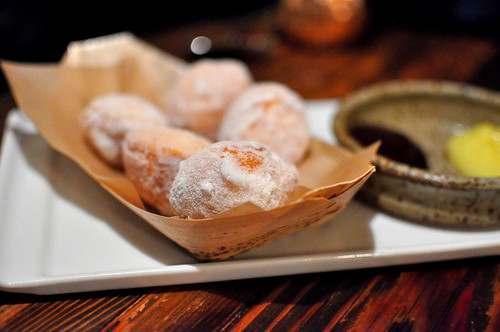 For dessert, we couldn’t resist the “Zeppole al Lemoni”  ($10). The Italian doughnuts were fried to order and arrived at the table hot to the touch and covered in superfine sugar. 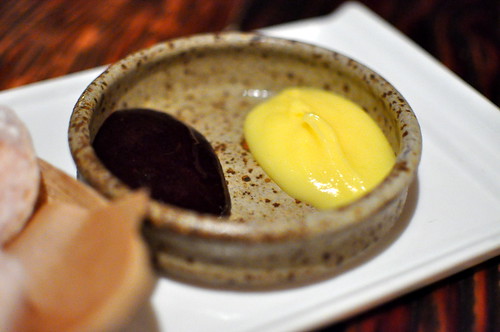 The texture of the doughnuts wasn’t particularly light or noteworthy. However, we barely noticed once they were smothered in Meyer lemon curd and Earl Grey berry conserva.

Bottega is a sweet little spot for solid food and chill atmosphere. Thanks for sending me here, Danny.