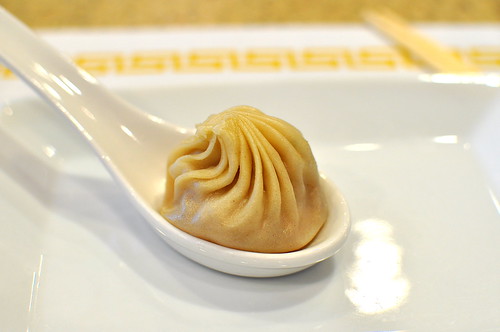 Founded in 2009 by Jeff Okita and Alex Tao, Six Taste is a local company that leads culinary tours across the Southland. Stretching from Santa Monica to Arcadia, these tours explore the histories and eateries of Los Angeles’ diverse neighborhoods and ethnic enclaves.

Six Taste recently held a “Media Day” that allowed me the opportunity to participate in one of their highly-touted outings. Since my mom was in town for the weekend, she was invited to come along as well. Joining us on the Delicious Dumpling Tour was Esther of EstarLA, Marian of Marian the Foodie, and Krista of BrandX. Everyone was excited to see and experience the city of Arcadia through Six Taste’s food-focused lens. 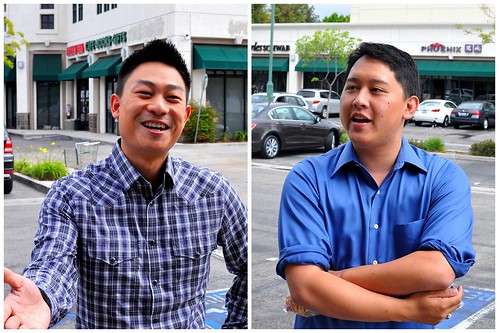 Our fearless leader was Michael Lin (left), a Taiwanese-American born and raised in Arcadia. Six Taste’s founder Jeff Okita (right) also came along for the ride.

Located a few short miles east of Pasadena, Arcadia is home to the third largest Taiwanese population outside the island. I’ve eaten at a few of the restaurants and cafes that line Baldwin Avenue, but doing so with an expert by my side was a completely different experience. Our guide’s knowledgeable insights and funny anecdotes provided proper context and an interesting perspective to everything that we ate. I learned so much from Mike and definitely came away with a better understanding of not only Taiwanese cuisine, but the Taiwanese diaspora as well. 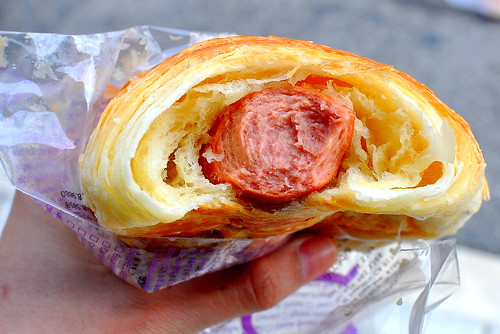 The Delicious Dumpling Tour, which is priced at $55 per person, began at 9:30 AM and included five stops spanning two neighboring strip malls. While we were waiting for the group to assemble, Mike passed out hotdog stuffed croissants hot from the ovens of J.J. Bakery, our first stop on the tour.

The buttery croissant had a pliable and slightly stretchy consistency that is characteristic of Taiwanese baked goods. The hotdog, on the other hand, was snappy, salty, and all American. 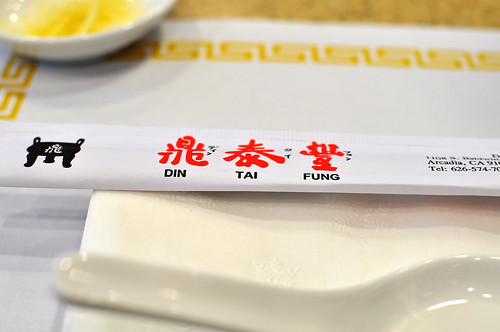 As soon as the clock struck 10, we made our way to Din Tai Fung, hoping to beat the crowds. Din Tai Fung is a renowned Taiwanese dumpling house that opened its first and second U.S. locations in Arcadia. The specialty here are soup-filled dumplings called xiao long bao. 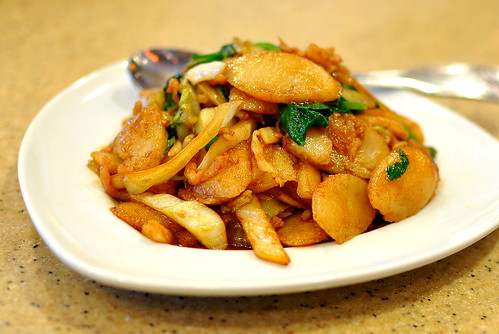 Before diving into dumplings, we sampled several other menu items. The first to arrive was a Taiwanese take on Shanghainese rice cakes. This rendition was noticeably less oily and salty than those I’ve eaten at Chinese establishments around town. 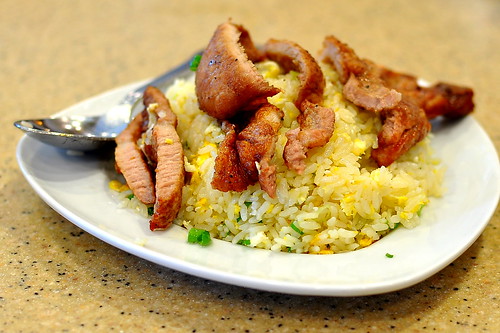 We also tried the pork chop fried rice, which was quite different from other Taiwanese pork chops I’ve sampled. Whereas the ones at Old Country Cafe and Pearl’s Restaurant were battered and fried, this version lacked any sort of coating. Still, the meat was moist and well-seasoned, and the fried rice was remarkably fluffy. It’s never too early in the morning for pork and rice. 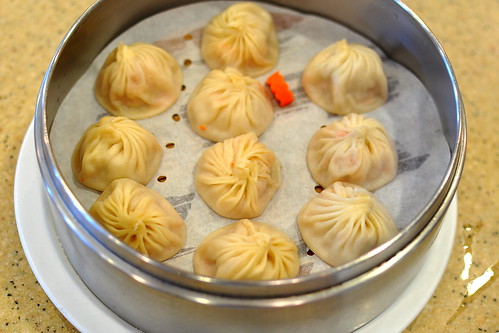 Next, the soup dumplings arrived. The first batch was the classic pork variety, and later on, dumplings stuffed with crab and pork graced the table. What sets Din Tai Fung’s xiao long bao apart from those made on the mainland is its thinner, more elastic skin and less oily filling. Also, all of the dumplings are painstakingly folded by hand to have exactly eighteen pleats. Mike informed us that an employee is charged with counting the pleats on each and every dumpling to make sure that all eighteen are present. Yow! 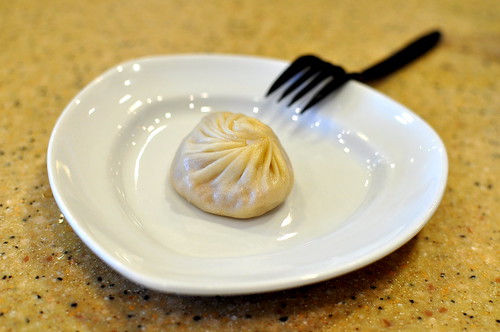 Our final bite at Din Tai Fung was sweet taro dumplings. They were adorable and delightful. 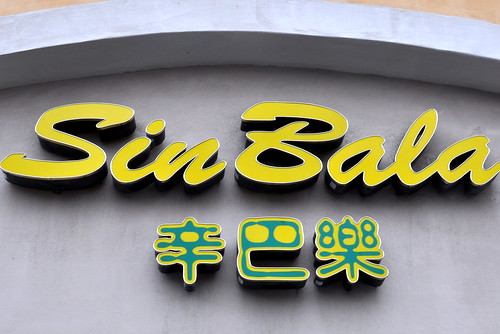 Stop number three on the tour brought us to Sinbala for Taiwanese night market street food. Whereas Din Tai Fung was impeccably clean and had an orderly way about it, Sinbala was a less polished down-home establishment. 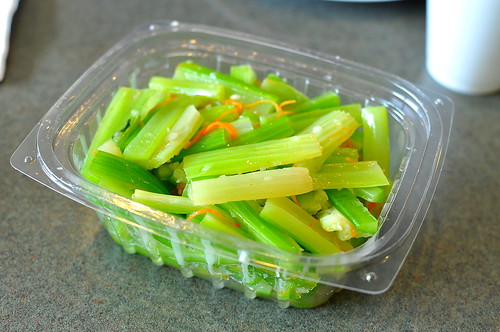 It is tradition in Taiwanese cuisine to nibble on cold appetizers before the start of a meal. We shared a container of celery marinaded in minced garlic and sesame oil to start. 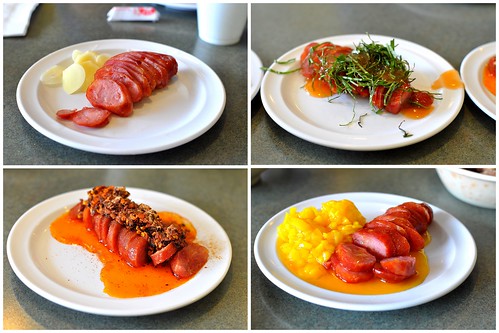 Taiwanese sausage is reminiscent of Chinese sausage in that it is quite sweet and fatty. The consistency, however, is more similar to ham. Of the four toppings that we tasted, I was most fond of the basil-topped one and the plain one with garlic. 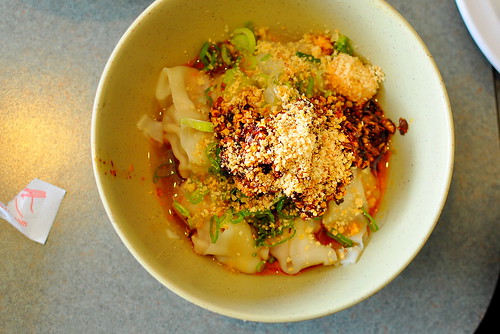 We also shared a bowl of  spicy wontons doused in chili oil, peanuts, garlic, ginger, green onions, and Szechuan peppercorns. The flavors and spicing were totally up my alley. 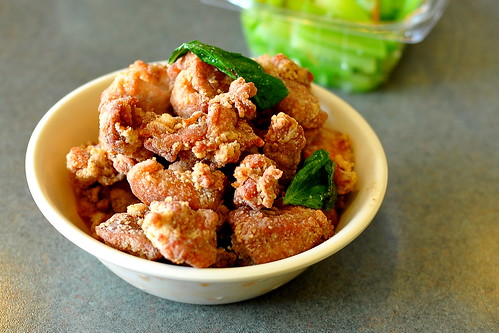 I also really liked the popcorn chicken. Each nugget was impressively grease-less and battered in a delectable salt, pepper, and  five-spice blend. The couple bites that I snagged with fried basil leaves were the best. 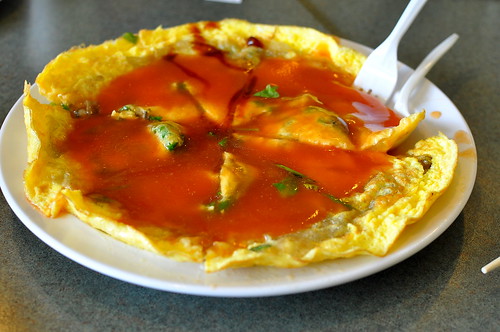 The only dish that I didn’t warm up to was the oyster pancake topped with a sweet garlic chili sauce. The pancake was made with sweet potato starch, which resulted in a goopy, off-putting consistency that I just couldn’t dig. 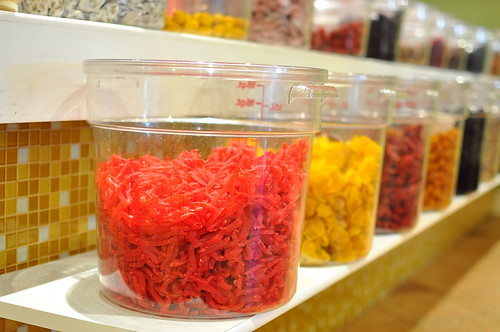 From Sinbala we walked across the way to Hanny Snack House, which shares a space with LolliCup. The specialties here are dried and pickled fruits, dehydrated seafood, and various types of jerky. 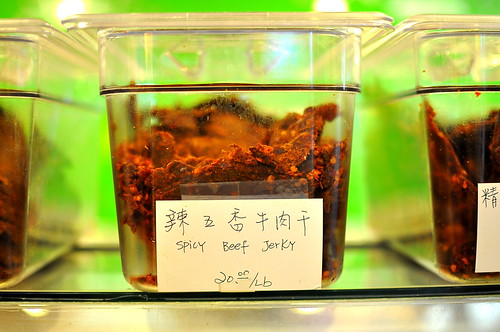 We started off tasting a few varieties of jerky that were appealingly sweet, spicy, and tender. After a short introduction to the wares, we were given free reign to try whatever items suited our fancy. 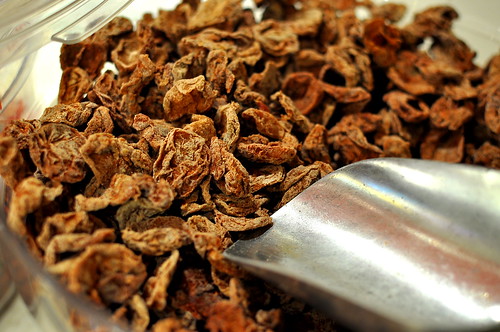 My mom hovered around the salted fruits and eventually purchased a little baggy of dried plums. 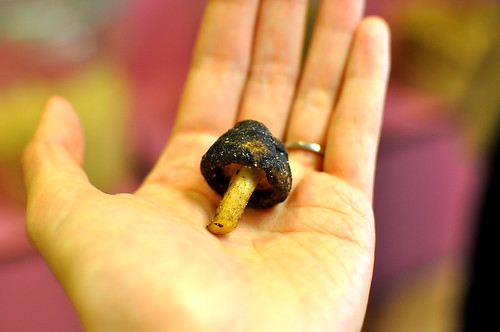 I was enamored with the dehydrated mushrooms, which had the most incredible crunch! 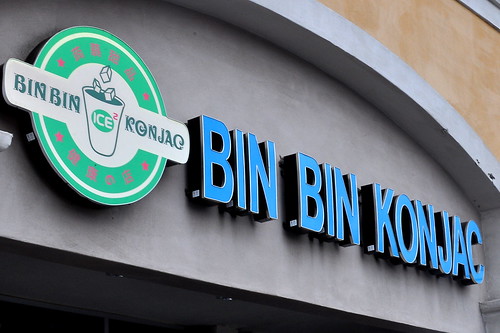 Our final stop of the tour was at Bin Bin Konjac, a shop that sells Taiwanese shaved ice. If I recall correctly, “Bin Bin” refers to a Taiwanese actress who lent her name to the establishment, while “Konjac” is a plant with various health claims attached to it. 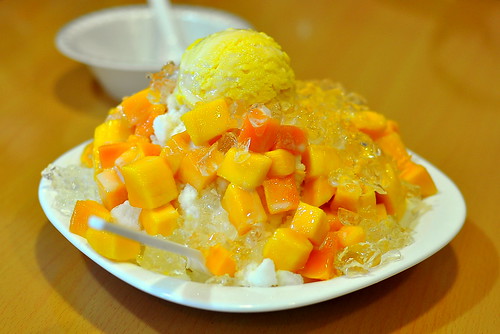 Between the seven of us, we shared one serving of shaved ice topped with sweetened condensed milk, mango ice cream, fresh mango, and clear jellies from the konjac plant. Although I found it inferior to Taiwanese shaved snow, it was just the thing to cleanse our palates after the four previous stops. 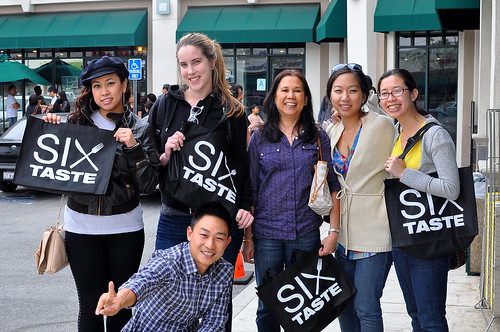 Some four hours later, the Delicious Dumpling Tour finally came to an end. My mom and I were both pleasantly stuffed in more ways than one—our bellies with delicious food and our brains with Taiwanese facts. I highly recommend this tour to locals and visitors alike, and make sure to request Mike as your guide!