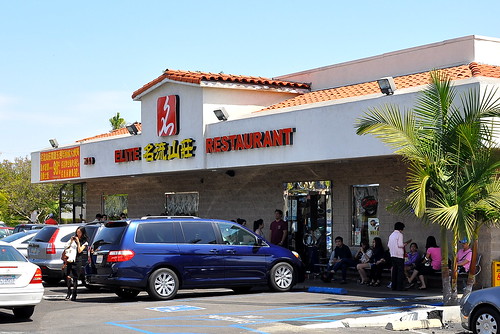 Waiting for a table at Elite on a weekend afternoon tests one’s dedication to the sport of dim sum. The bellies that gather here are a tenacious bunch; they don’t seem to mind waiting an hour or even two so long as the food is tops when their number finally gets called.

Arriving soon after the restaurant opens can dramatically improve wait times, but The Astronomer and I relish sleeping in on weekends, so we resigned ourselves to thumb twiddling, menu gazing, and Dollar Store perusing (there’s one next door). 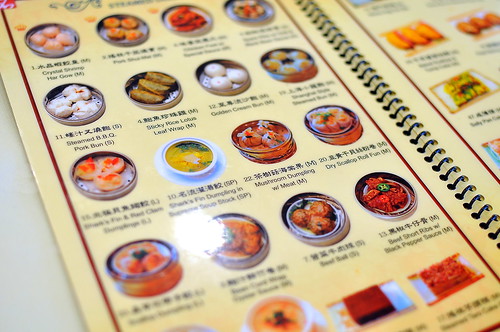 Once we were finally seated, some ninety minutes after we arrived, it was time to do what we do best—over-order and overeat. What’s unique about the dim sum experience here is the lack of carts roaming the dining room. We were presented with a picture menu and an order form as soon as we sat down. 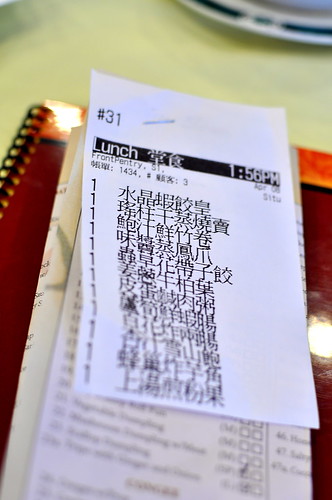 I’ve always loved the chaos of traditional dim sum, but found this approach quite appealing. Not only were my favorite dishes prepared to order, but I wasn’t tempted to waste space on lesser dishes just because the cart came by. I also liked that I didn’t have to scan the room searching for the lone lady serving chicken feet. A simple tick mark on the form and voila, steaming hot chicken feet appeared at the table. Cart-less dim sum certainly has its merits. 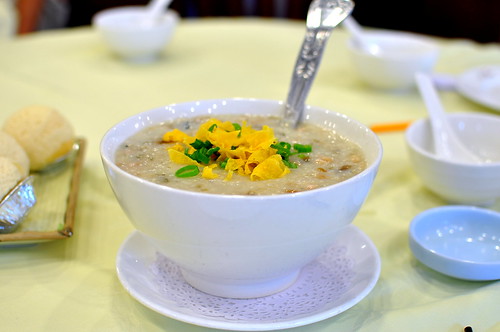 On this particular outing, we were joined by my mom, a woman who demands congee at dim sum. We indulged her desires with a large bowl full with pork and preserved egg ($6.38). The congee, which came topped with spring onions and crunchy wonton bits, soothed our empty bellies. 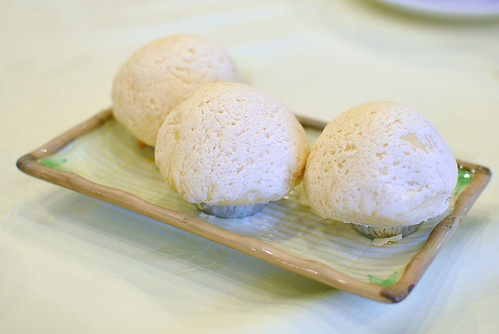 The crispy snow buns ($2.38), which I ordered because the name sounded intriguing, arrived before anyone was ready to dive into desserts. Still, we each took a bite. While the bun was sweet and light, it wasn’t as crispy as billed. Chalk this one up to curiosity. 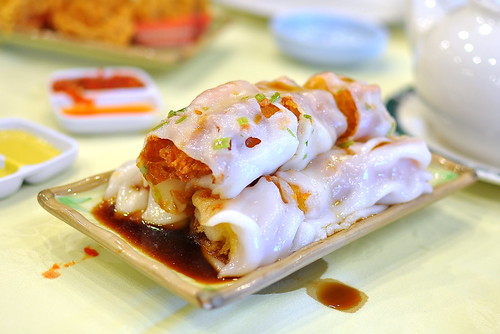 The crispy shrimp rice noodle ($3.38) offered a textural twist on my favorite dim sum dish. The crunchy filling contrasted brilliantly with the smooth noodle sheets. The soy sauce tied everything together with its subtle sweetness. 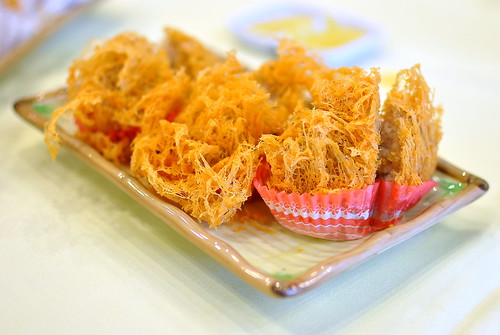 In addition to congee, my mom also adores taro and insisted we try the fried taro cake ($2.38). The wispy crust shattered in our mouths, revealing a savory filling of pork and taro. I’d hit it again. 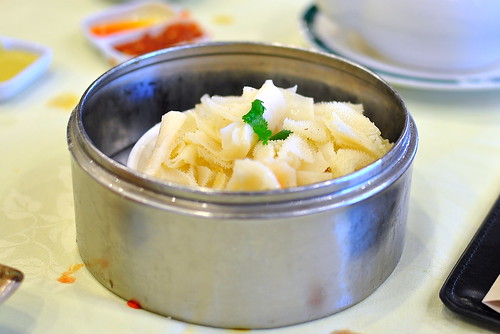 With mom by my side, I had a kindred spirit to share the tripe with ginger and onion ($5.48) with. Its texture was expectedly chewy, while the seasonings were mild but satisfactory. 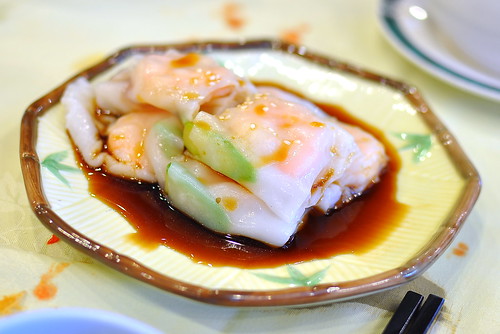 Since rice noodles are my absolute favorite dim sum delight, I couldn’t resist ordering another rendition. This one featured shrimp and asparagus ($3.38). The slick rice noodles and barely cooked shrimp had an easy way of going down. 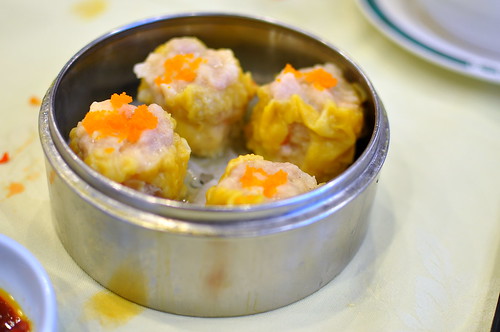 A proper dim sum spread isn’t complete without pork shui mai ($3.38). The version here is super-sized with plenty of pork and shrimp. Each dumpling was mighty meaty and seriously satisfying. 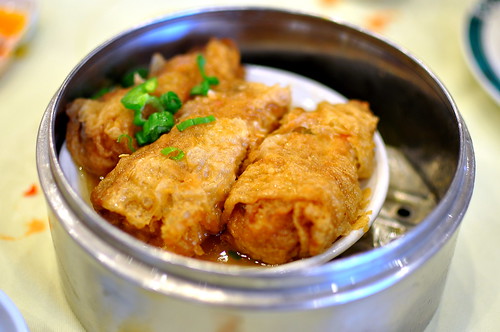 Another must-order for me at dim sum is pork- and wood ear mushroom-stuffed bean curd wrap in oyster sauce ($3.38). One of the waitresses swooped in and snipped the rolls into bite-size pieces with her handy scissors. I love it when they do that without being asked. 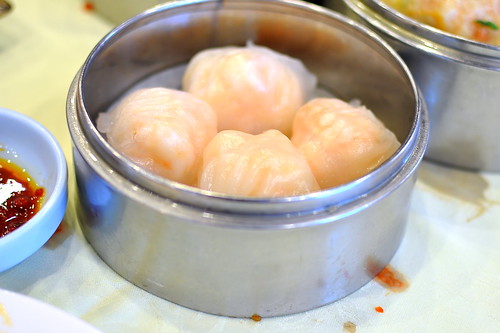 Another quintessential dim sum staple is the crystal shrimp har gow ($3.38). Each impressively plump parcel contained loads of perfectly cooked shrimp, while the translucent wrapper had a nice chew. 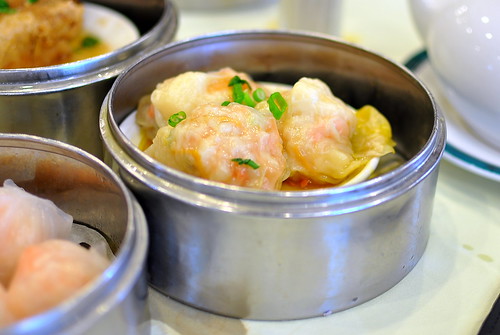 The scallop dumplings ($5.48) were even more impressively sized than the har gow and shui mai. The plentiful scallops and shrimp inside were snappy and not the least bit overcooked. 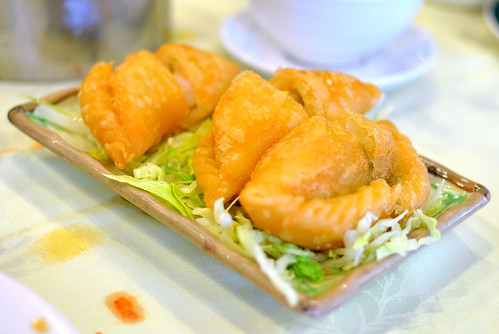 The  fried shrimp dumplings ($3.38) were a little on the greasy side, but truth be told, I didn’t really mind because the shrimp were big and cooked well. 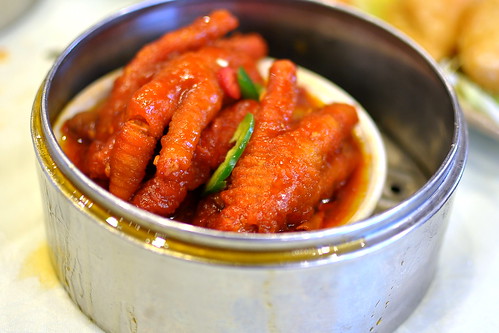 And finally, a steamed-to-order dish of chicken feet with special sauce ($3.38). Even though the five-spice-laced “special sauce” was slightly too sweet for mom and me, we appreciated its supple texture.

Elite’s a great place to yum cha even though the waits can be painful on weekend afternoons. Don’t do as I do. Go early. Eat up. Get out.

There’s more to eat in Monterey Park on Gastronomy: