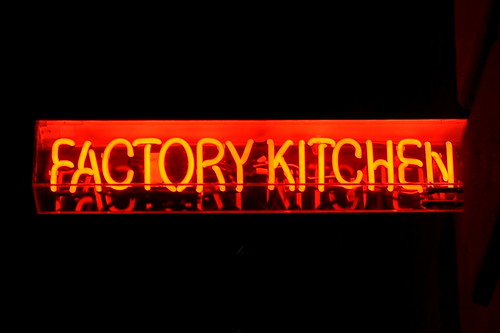 In college urban economics class, we studied the concept of agglomeration economies: “as more firms in related fields of business cluster together, their costs of production may decline significantly.”

While car dealerships are the classic example of this phenomenon, I’d argue that trattorias specializing in fresh, handmade pasta in Downtown Los Angeles are currently clustering in an economically savvy way. I’m not sure if my professors would agree, but it’s my blog and I’m going with it! 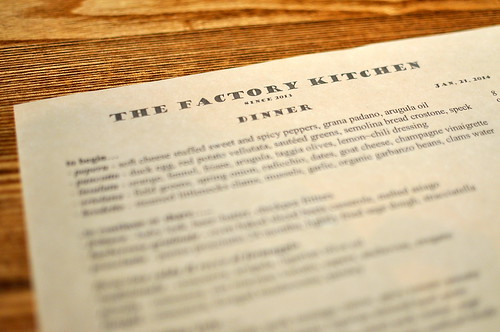 The Factory Kitchen, located in the Factory Place Arts Complex in the Arts District, is the latest addition to an Italian noodle hotbed that includes the likes of Bestia, Drago Centro, and Maccheroni Republic.

The restaurant is a collaborative effort between Restaurateur Matteo Ferdinandi, former business partner of Celestino Drago, and Chef Angelo Auriana, formerly of Valentino. The offerings aren’t region-specific, but are traditionally Italian, according to the restaurant’s website. 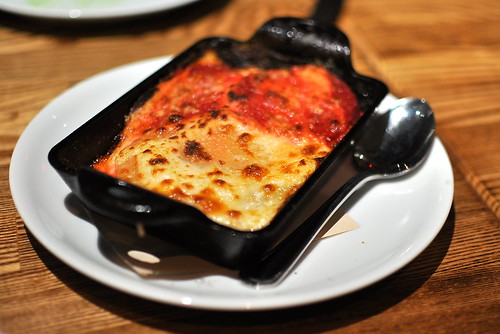 Using Jonathan Gold’s recent review as our guide, we set out to order as much food as a party of four could eat (and afford). This place ain’t cheap.

First up, the barberosse gratinate ($10), a sliced beet casserole swimming in an asiago cheese bath. Sweet, salty, and just rich enough, this dish struck a homey and tasty note. 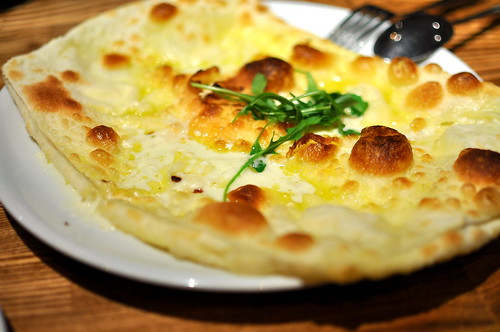 The dish that Sarah and I were most excited to try was the traditional focaccina calda di recco al formaggio ($17), a flatbread topped with crescenza cheese, arugula, and Ligurian olive oil. We’d previously shared the focaccia di recco at chiSPACCA.

While the version at chiSPACCA was crisp like a cracker, Factory Kitchen’s take was soggy in the center and toasty along the edges. The foccacia’s texture was too wet and limp for my taste, but Sarah quite liked its bready properties. Everyone agreed that it was much too salty. 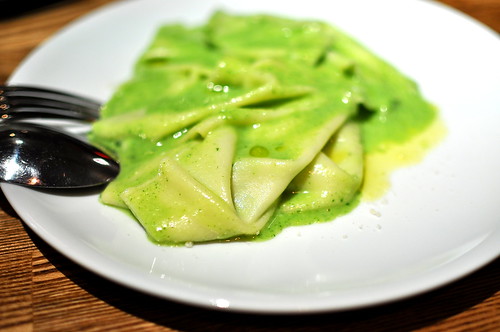 The highlight of the night had to be the mandilli di seta ($19), “handkerchief” pasta lovingly coated in a Ligurian almond basil pesto. The noodle’s silky texture was state of the art. Our only qualm was the teeny tiny portion size. 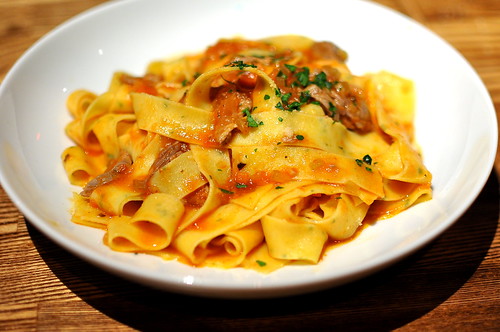 Tasty but less exceptional was the picaggette ($20), parsley-dotted strands in a lamb and tomato sauce. 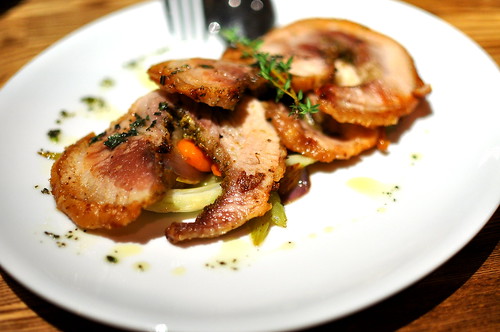 Moving on to the meats, we shared the porchetta ($25), pork belly rolled with herbs and served with roasted onions, carrots, fennel, and celery. The porchetta was sliced thinner and was more caramelized than expected, but the overall flavor was rich and savory. 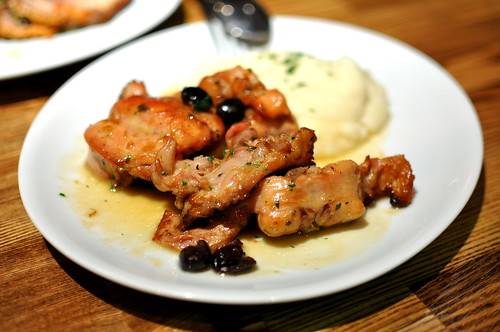 Our second secondi was the coniglio ($28), oven-roasted rabbit with olives, marjoram, and mashed potatoes. The lil’ rabbit was cooked to perfection, juicy and tender, while the seasoning hit the mark. 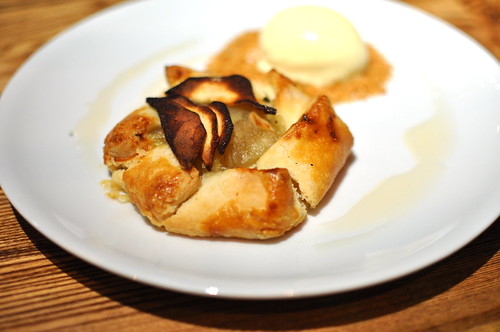 To finish, a trio of desserts. The best of the ho-hum bunch was the Granny Smith apple crostata ($8) with five spice gelato and balsamic reduction. In addition to chopped apples, the crostata contained apple sauce too, which was a strange touch. The gelato’s five spice flavor was totally muted. 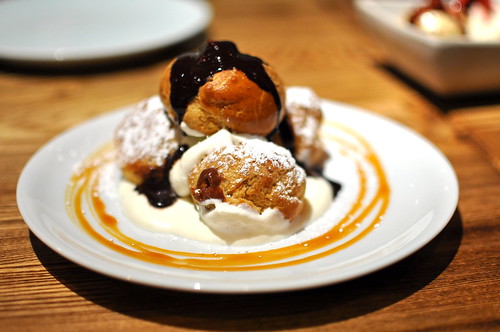 I chose the bigne di cioccolato ($8), chocolate custard-filled puffs with caramel sauce. The filling was good, but the puffs tasted a touch stale. 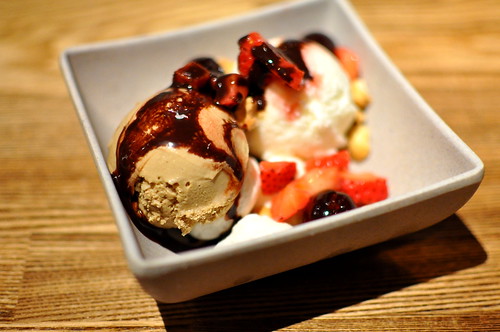 And finally, paciugo ($8), an Italian ice cream sundae with a grainy scoop of fior di latte and a better one of coffee. Also in the mix were meringues, hazelnuts, chocolate sauce, amarena cherries, and berries.

While I enjoyed dinner at Factory Kitchen well enough (Mmm, handkerchief!), I’d much rather dine at Bestia for the same price point. And for fewer dollars but an equal amount of utility, I’d visit Maccheroni Republic. Agglomeration economies create a plenitude of choices for consumers, and I like to shop around.