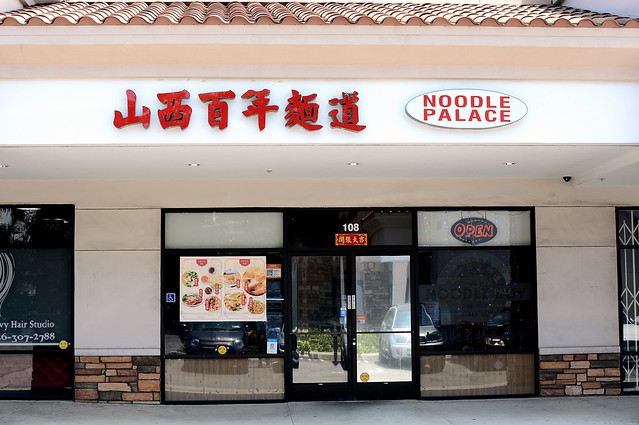 Wonton-goers still weep for the loss of Noodle Boy, but so it goes in the cut-throat San Gabriel Valley restaurant scene. Taking over its space is Noodle Palace, a Shanxi-style restaurant serving an assortment of cold dishes, dumplings, and pancakes, along with knife-cut and hand-formed noodles. With so many flour-forward items to sample, it’s best to come in for lunch or dinner with two or three friends. While it might be hard to resist jumping straight in for noodles, please take a pause for pigs ears ($10).

The densely packed terrine, mesmerizingly stratified and full of cartilage and skin, arrived in satisfyingly thick slices. The sweet chile soy sauce served alongside took the ears’s snappy texture and gelatinous chew to the next level. Following a pause for pigs ears was a parade chock-full of carbs. The scallion pancake ($3.99), draped on the plate like the coziest winter throw, delighted us with its light and flaky layers and subtle green onion glow. While visually arresting, the “special thick pancake” ($4.99) lacked pizazz in the taste department. Though truth be told, it was quite fun unfurling the pancake’s crispy spaghetti-like layers. …while the cat ear noodles ($8.99) impressed with its bouncy and smooth curls.

While I’ll probably never get over the absence of Noodle Boy and its unparalleled shrimp wontons, Noodle Palace is a welcome addition to the neighborhood.