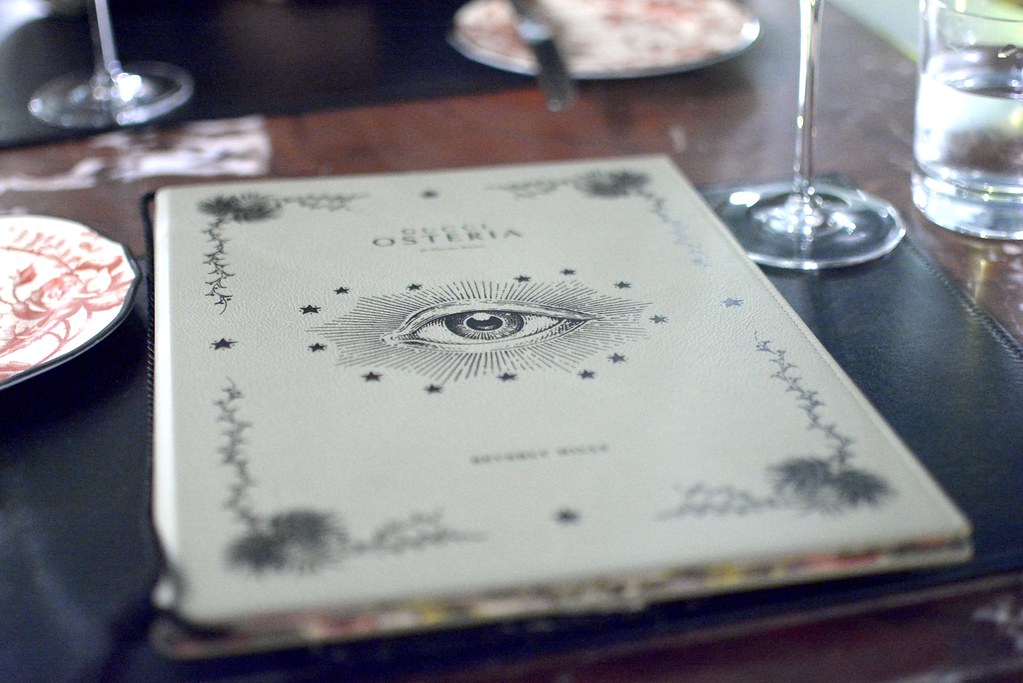 While I generally try to keep Dead Week as non-committal as possible, the opportunity to close out 2022 in grand fashion with dinner at Gucci Osteria da Massimo Bottura proved too enticing to resist. Joining me for the evening was my homie Thien Ho, who appropriately carried a Gucci clutch for the occasion.

The restaurant, which is located on the third floor of the Gucci store on Rodeo Drive in Beverly Hills, opened a month before the pandemic lockdowns in 2020. It is one of four Gucci Osterias that chef Massimo Bottura (who owns and operates three-Michelin-starred Osteria Francescana in Modena, Italy) opened inside select Gucci stores around the world. The original restaurant is in Florence, Italy, and the two other outlets are in Tokyo, Japan and Seoul, Korea. 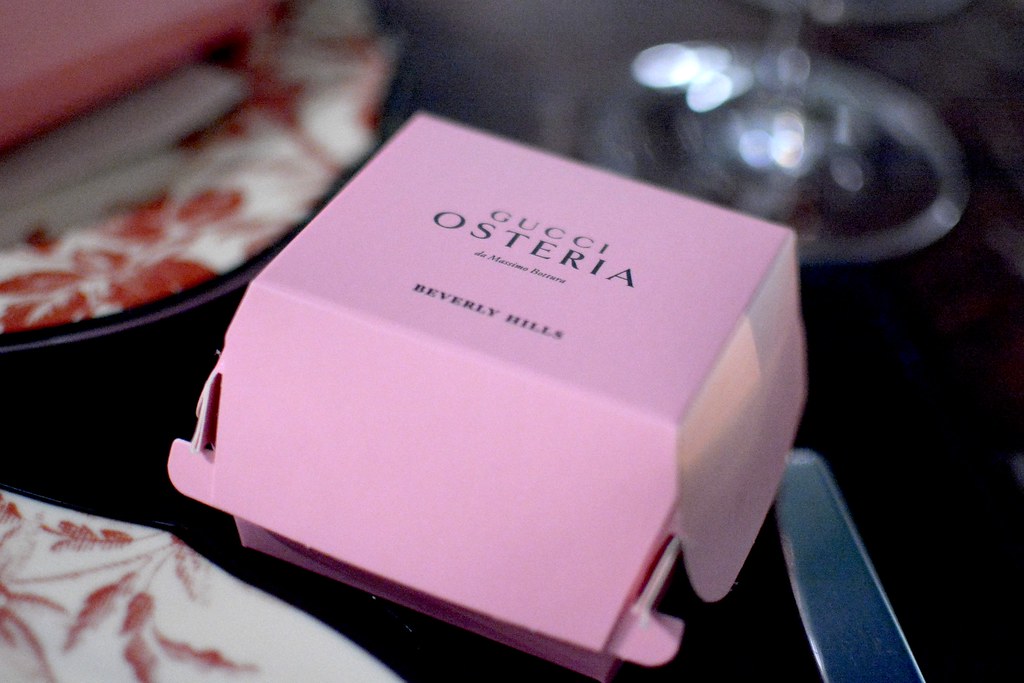 While the four restaurants share a name, founder, and Italian DNA, each location incorporates local flavors and sensibilities to provide a sense of place. The selection of clothes and accessories at a Gucci store in Seoul probably isn’t too different from the one in LA, but the menus for each Osteria are strikingly different. Teokbokki with chestnut, porcini, and pine mushrooms, anyone?

Behind Beverly Hills’s stoves is chef Mattia Agazzi, sous chef Vanessa Chiu, and pastry chef Tamara Rigo. All three worked at Gucci Osteria in Florence before relocating to Los Angeles. Together, with oversight from Massimo Bottura, the trio dreamed up a fine dining experience that’s playful and precise — a unique balance of creativity and technique befitting of its swanky environs. 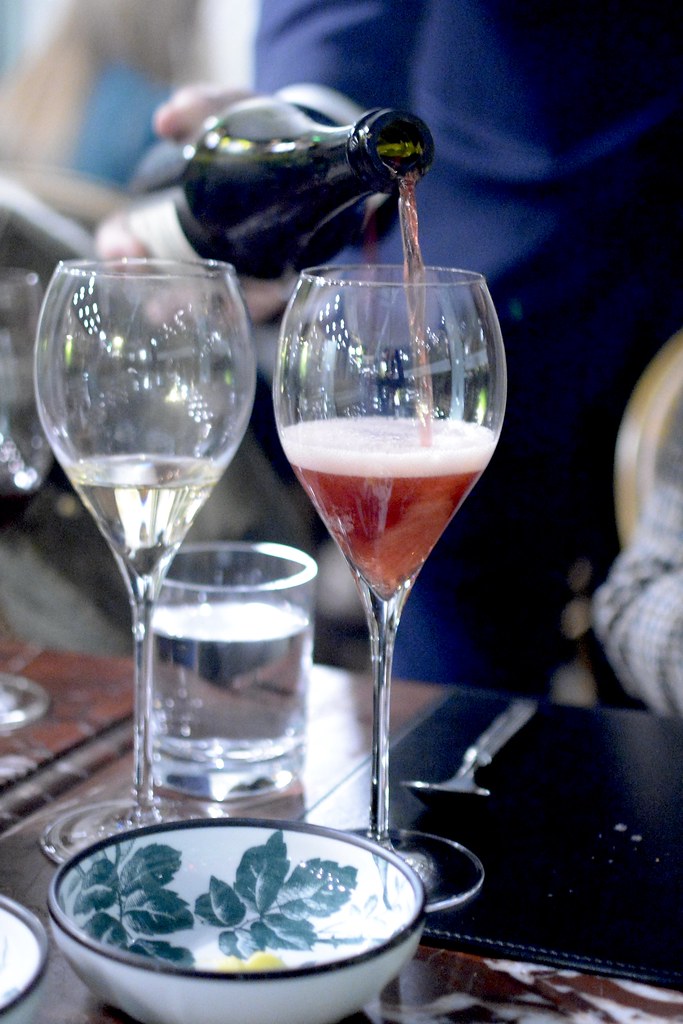 While lunchtime features an a la carte menu, dinner is a prix fixe affair with three different menus to choose from. We experienced the Under the Palms menu ($220) with wine pairings ($195). 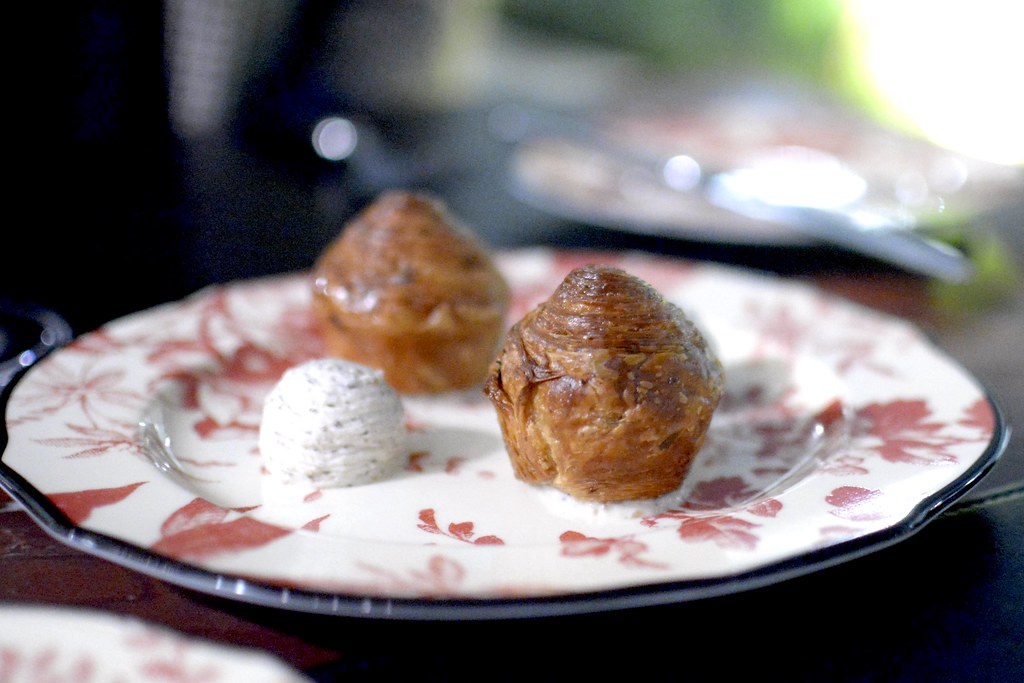 Dinner started off with a bite-sized pastry served warm with whipped truffle butter. 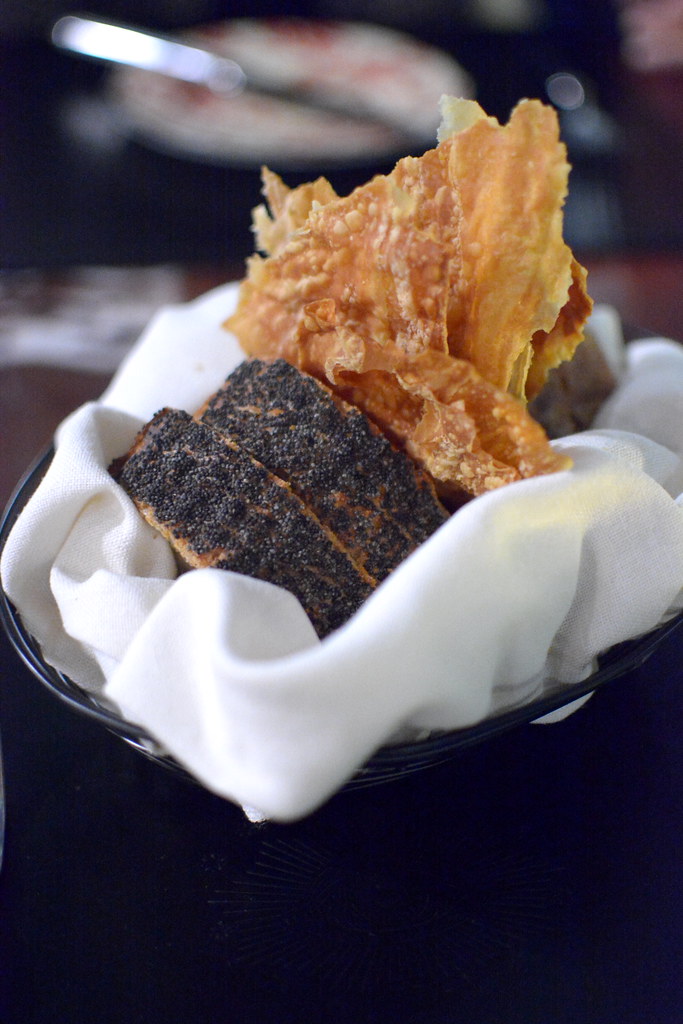 Next came the bread basket filled with house-made sourdough, a poppy-crusted loaf, and Parmesan crisps. 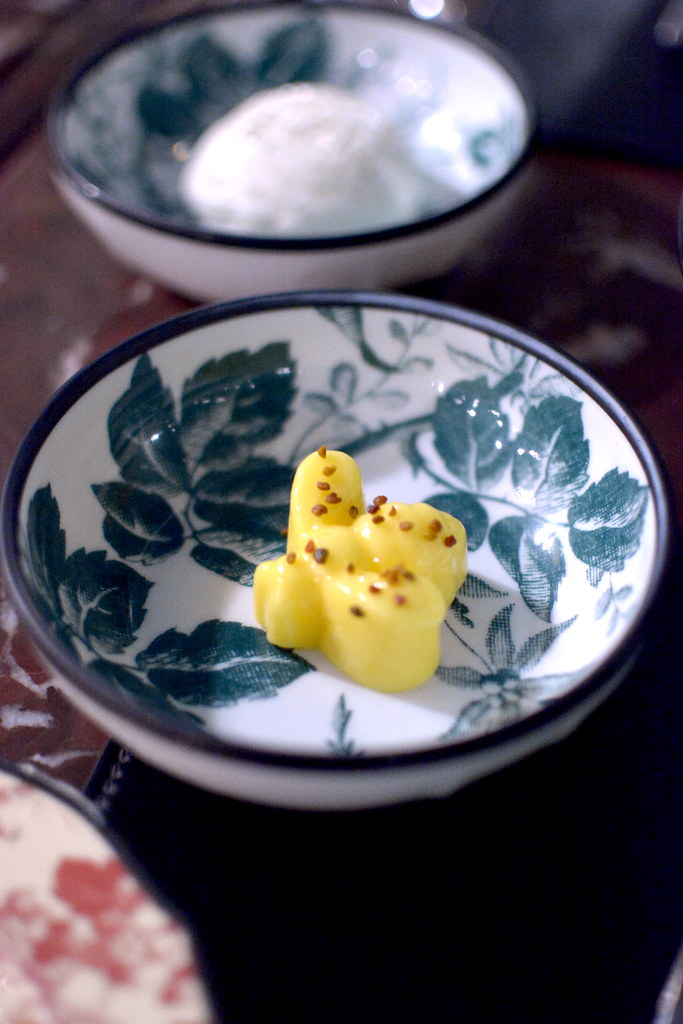 Served alongside the bread were imported ricotta and bee-shaped pollen butter. 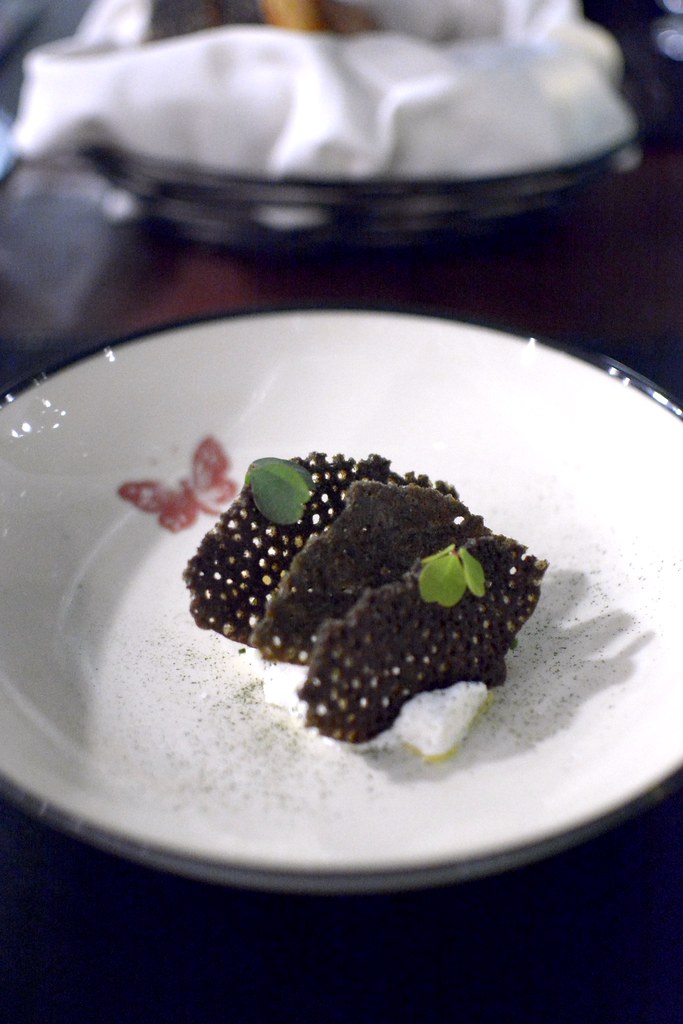 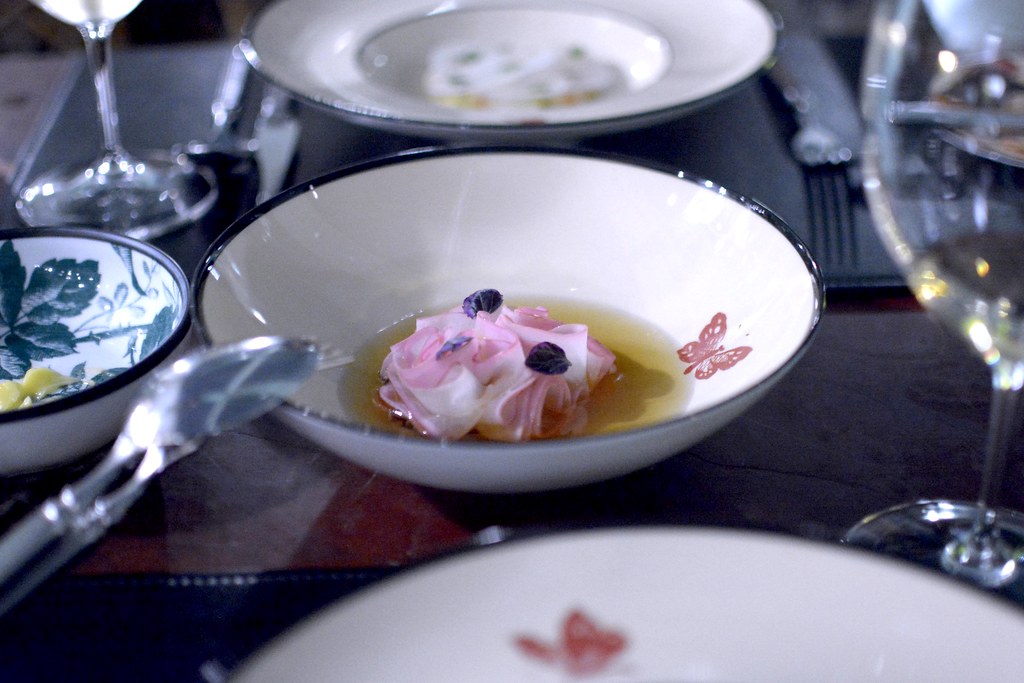 “The City is in Bloom,” which is from the Cali State of Mind menu, included steamed and fermented Japanese turnip, sautéed enoki mushroom, and celeriac dashi poured tableside. 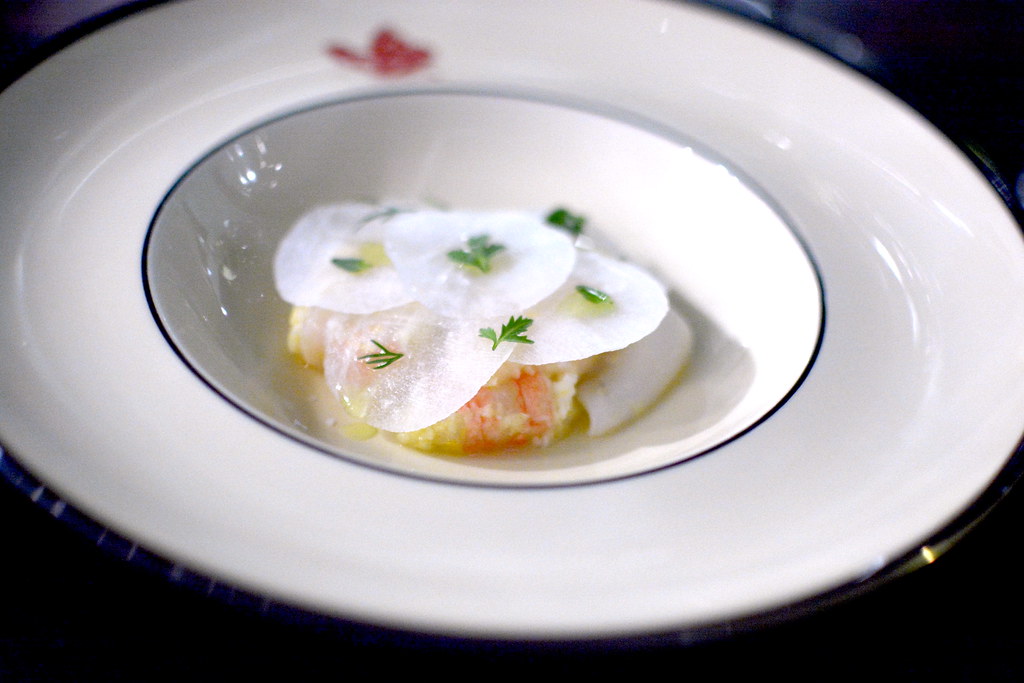 The “Insalata di Mare” brought us back to the Under the Palms menu. The seafood “salad,” which included deftly cooked shrimp, octopus, and clams, tasted like a cool ceviche. 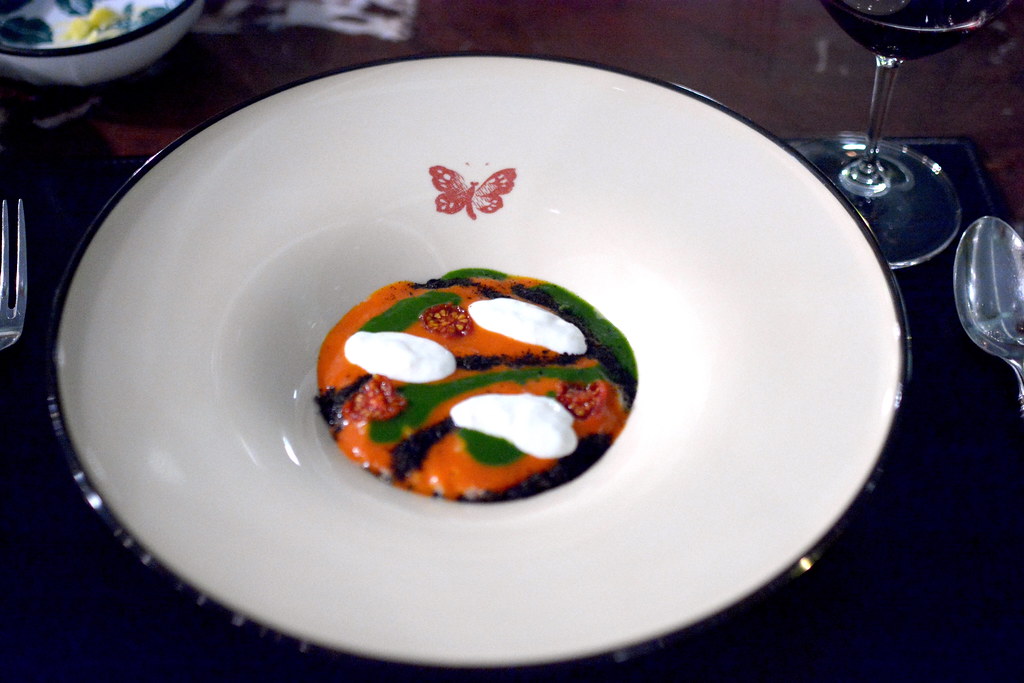 The “Risotto Camouflaged as Pizza,” which is something of a signature dish by chef Mattia Agazzi, arrived next. Gorgeously plated with artful swirls and blobs of tomato, basil, char, and stracciatella cheese, the risotto mimicked the flavors of a classic Margherita pizza. 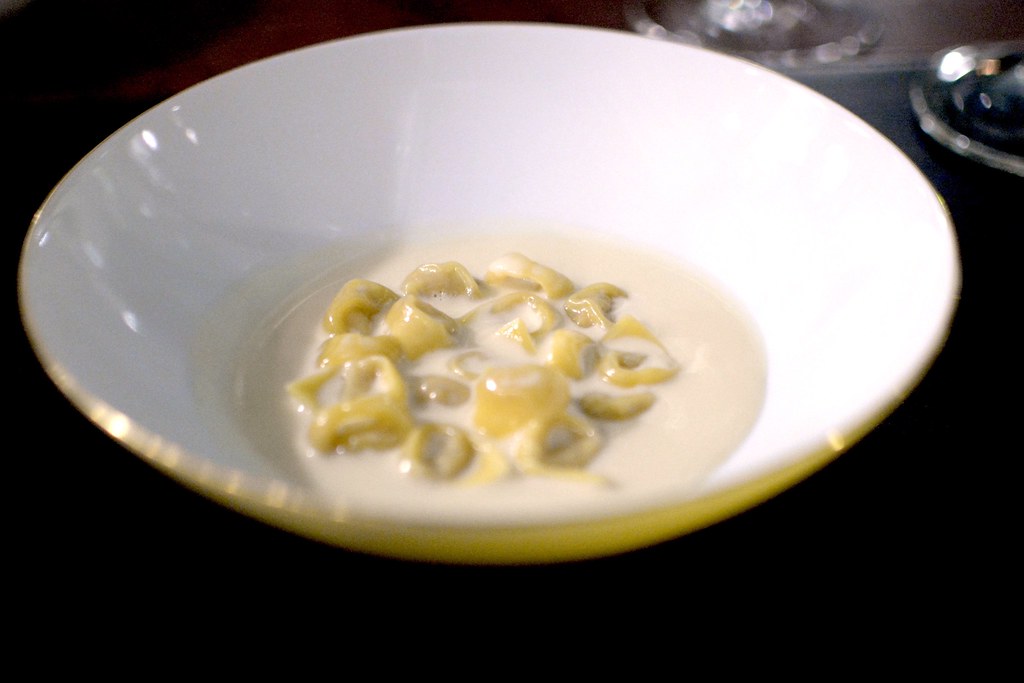 The tortellini in a luscious Parmigiano Reggiano sauce was the most traditionally executed dish on the menu. According to our server, the pasta is made each morning to Massimo Bottura’s exacting standards. 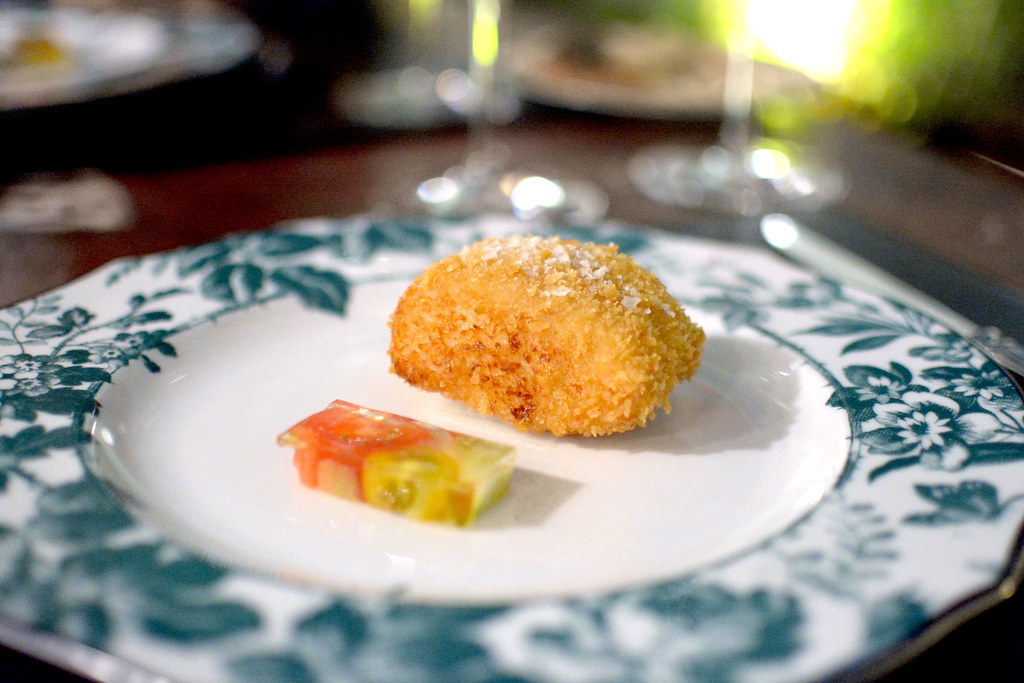 The “Cod as Milanese” was one of my favorites this evening. Prepared like a Milanese veal cutlet, the fish was perfectly tender while its breadcrumb coating boasted a satisfying crunch. Served alongside was a tomato terrine. 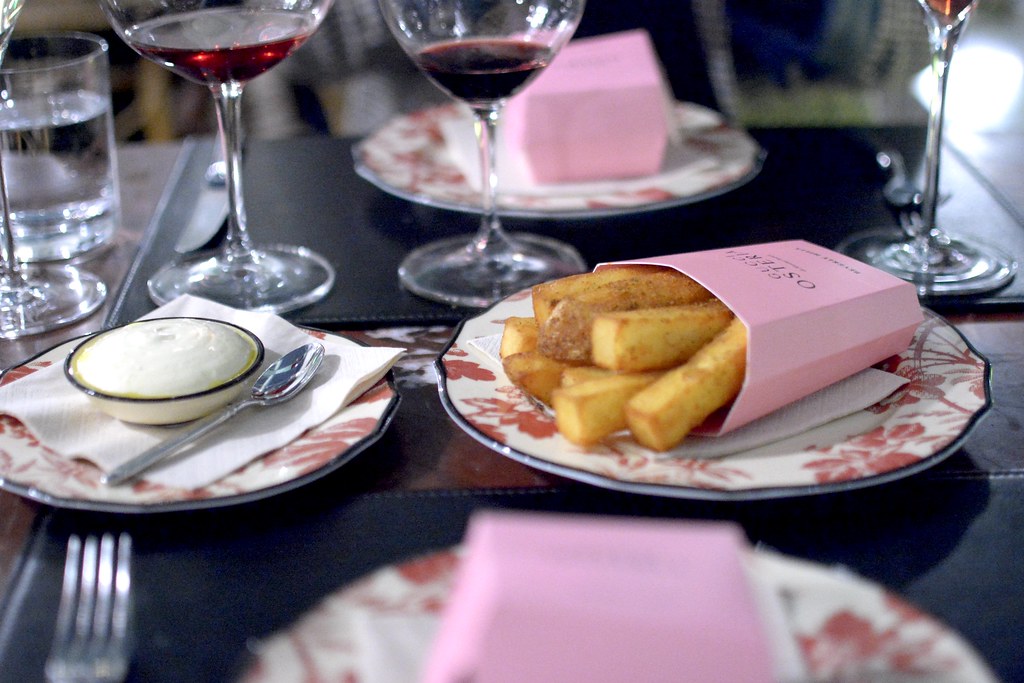 My dining companion and I were smitten with the hamburger and fries that arrived next. I mean, how adorable is the fast-food-style packaging? The thick-cut fries, which take two days to prepare, were crisp and well-seasoned. The balsamic mayonnaise made for an excellent dip. 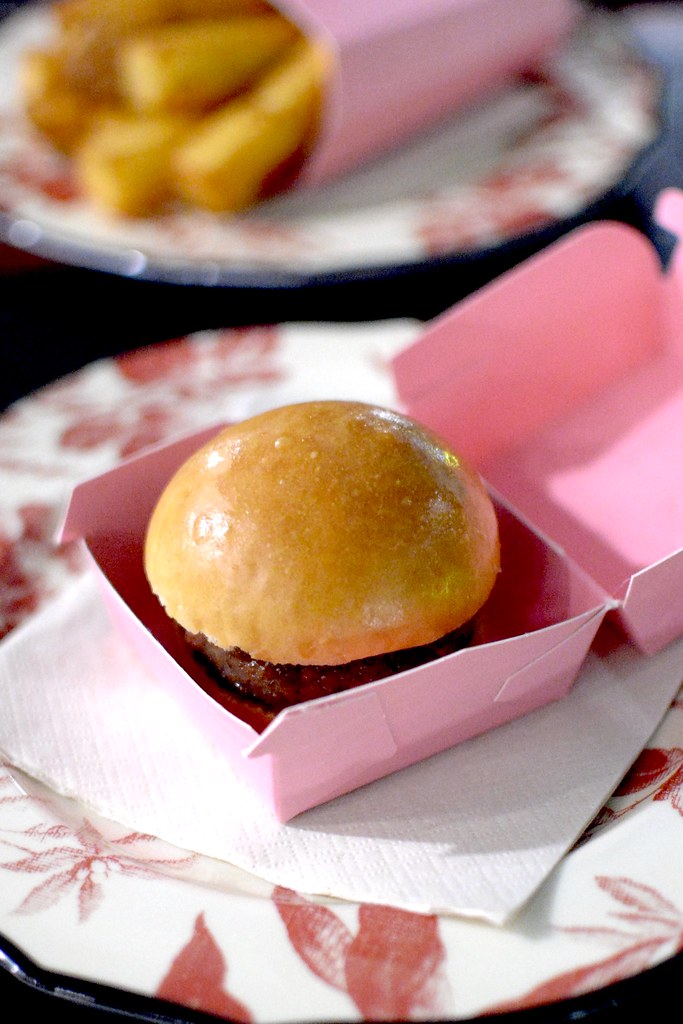 The Emilia burger, which was originally conceived as a collaboration with Shake Shack for the New York City Marathon years ago, is comprised of traditional ingredients from the Emilia-Romagna region of Italy including Cotechino sausage and Parmigiano Reggiano. 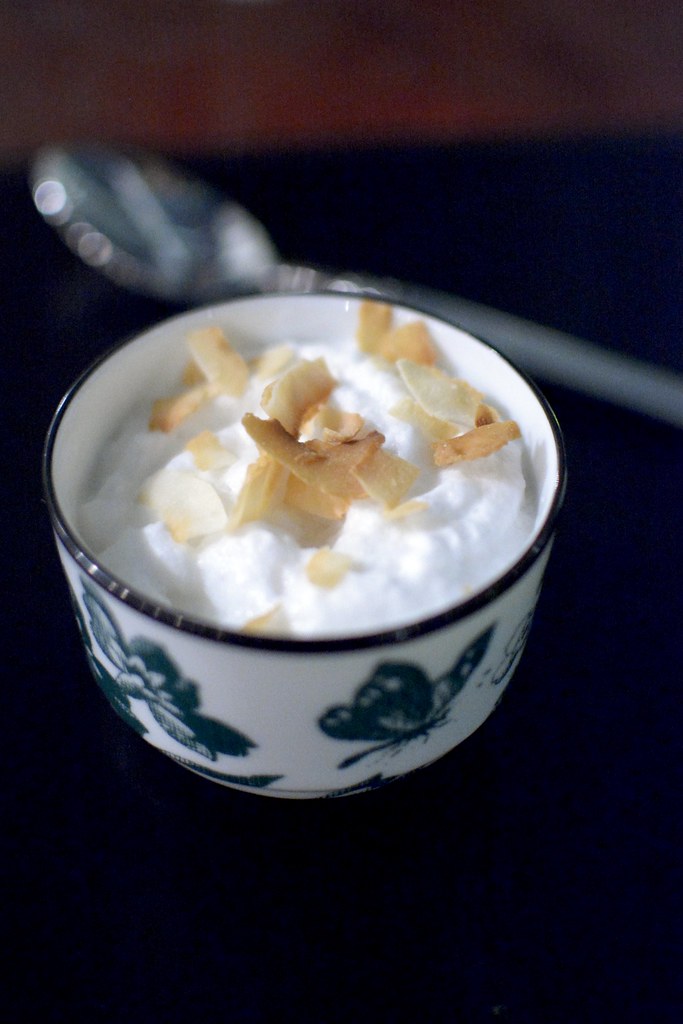 To transition our palates from savory to sweet, a refreshing palate cleanser made of yuzu and coconut inspired by the sgroppino cocktail. 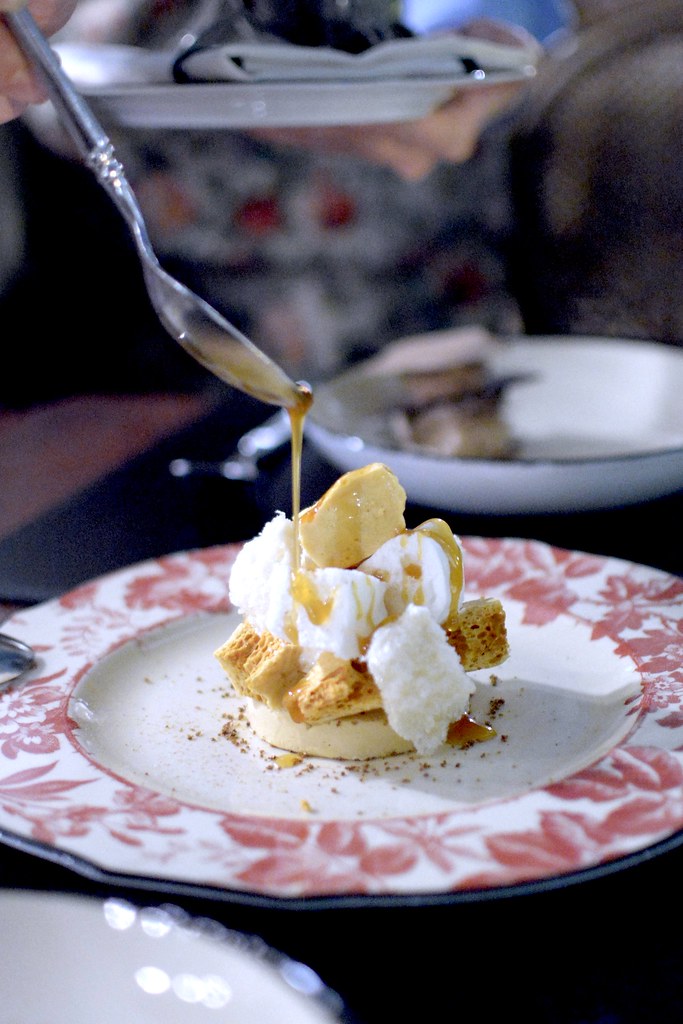 The first dessert to arrive, which is from the Chef’s Experience menu, was simply called “Milk & Honey.” Honey sourced from the Santa Monica farmers market was drizzled tableside, catching the sweet’s honeycombed ridges and rich custard base. 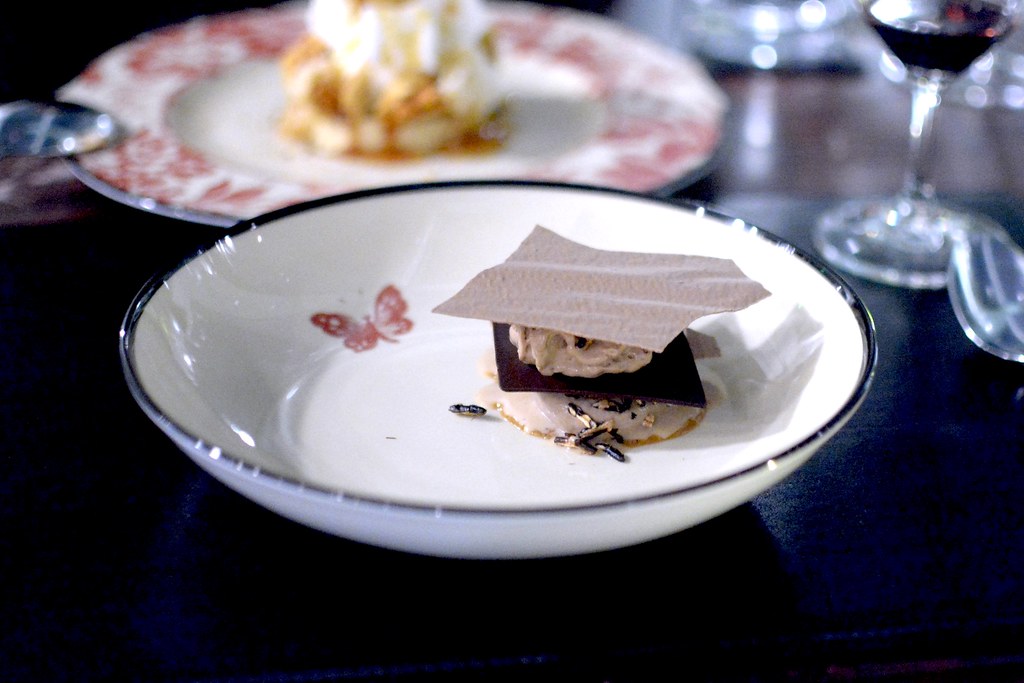 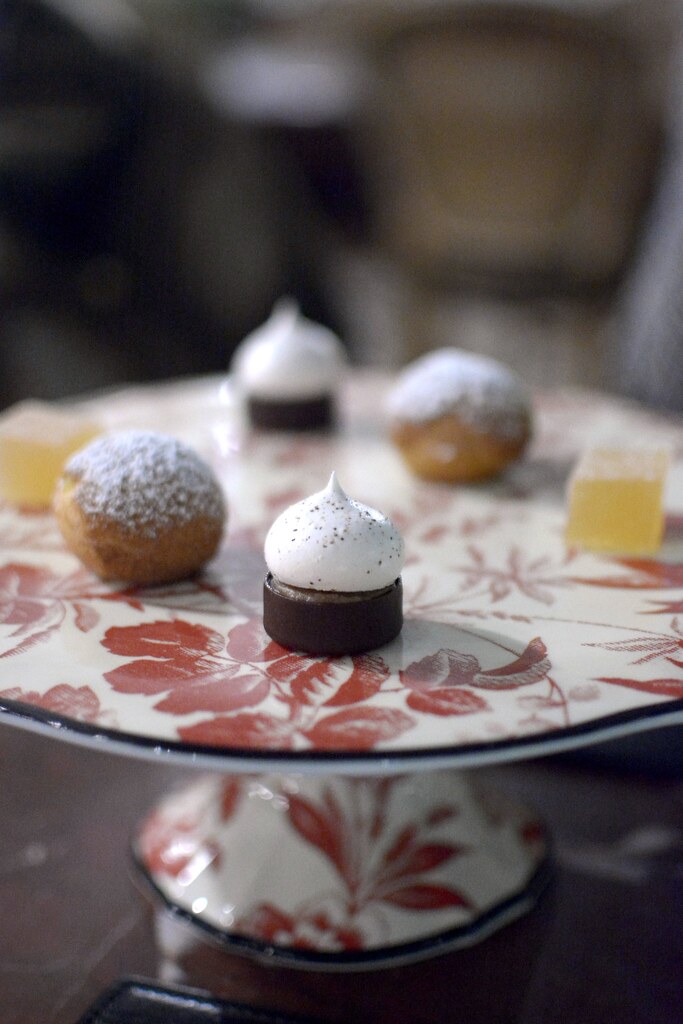 A trio of mignardise to close out the evening. 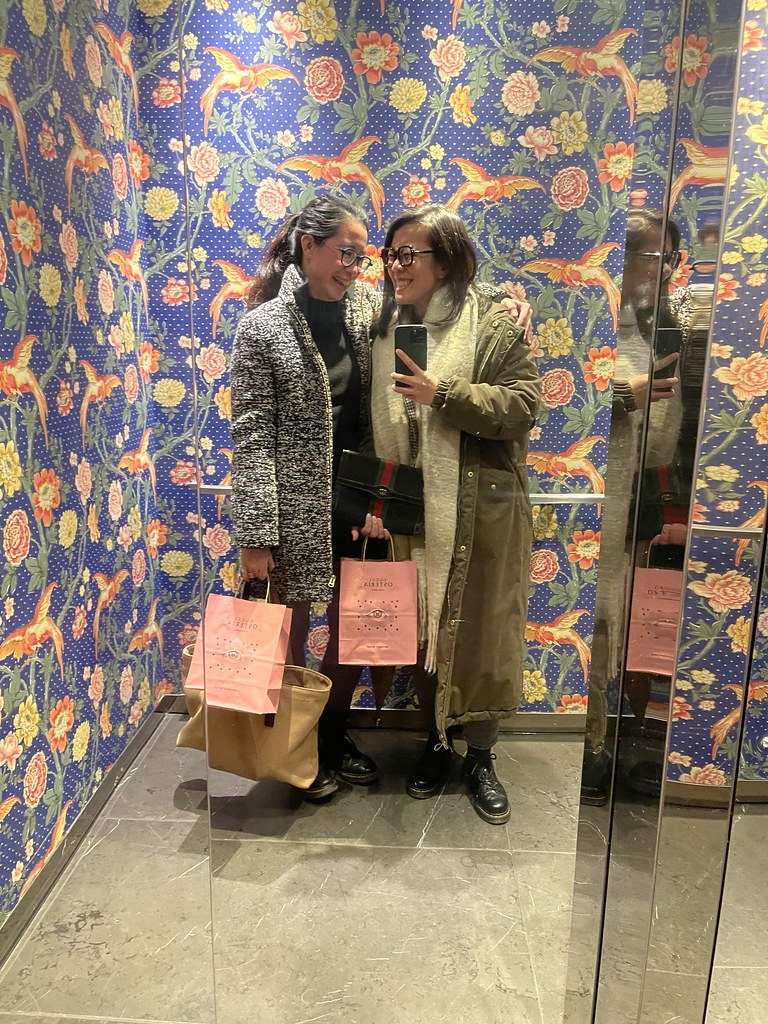 In Los Angeles, great food is often found in the most unlikely of places, whether it’s an aging strip mall or a run-down food truck, or even a Hollywood health club. While I was initially hesitant about a fine dining destination tucked inside a high-end retailer, I should’ve known better as a frequent diner in this town. Let Gucci Osteria surprise you too.