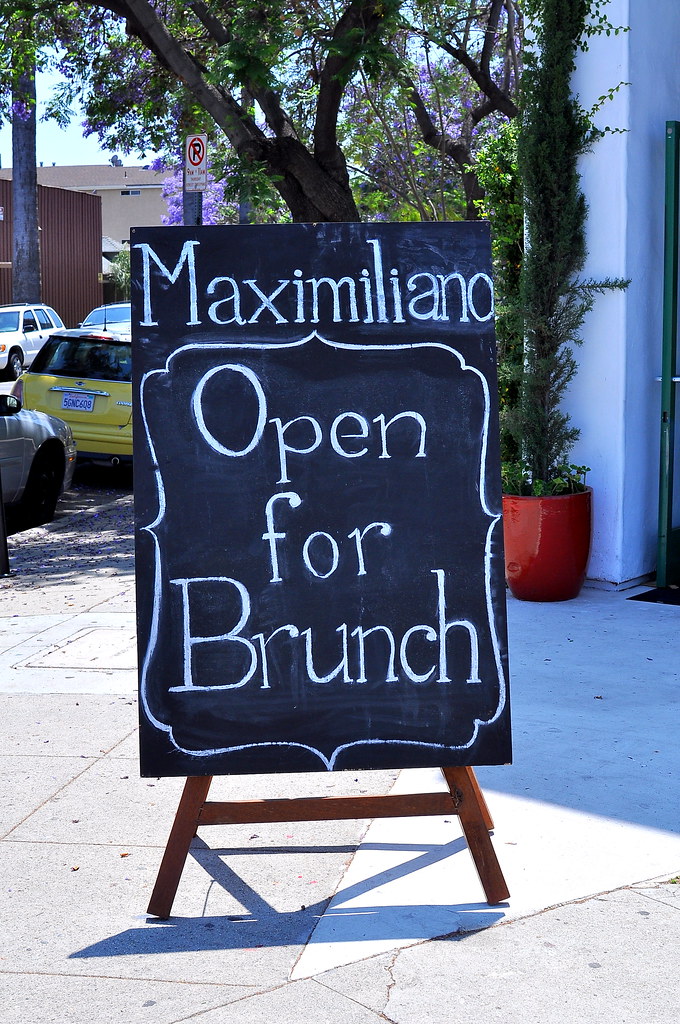 I had the best brunch at Highland Park’s Maximiliano the other weekend with a gaggle of girlfriends. Our party of seven piled into the restaurant some time past noon and proceeded to order everything that sounded delicious on the “kinda old school Italian” menu. It was a gustatory extravaganza full of giggles, gossip, and most importantly, damn good grub. 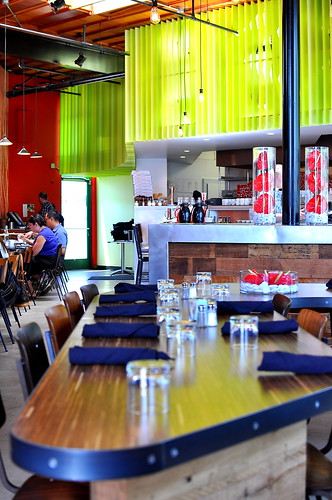 Chef Andre Guerrero of Oinkster fame opened the restaurant last October and introduced brunch soon after. I’ve yet to dine here after dark, but if the brunch time fare is any indication, I am in for a treat when I do.

In addition to the fine food, the space at Maximiliano is really something. Modern yet comfortable and full of natural light, it had a casual vibe that I liked very much. 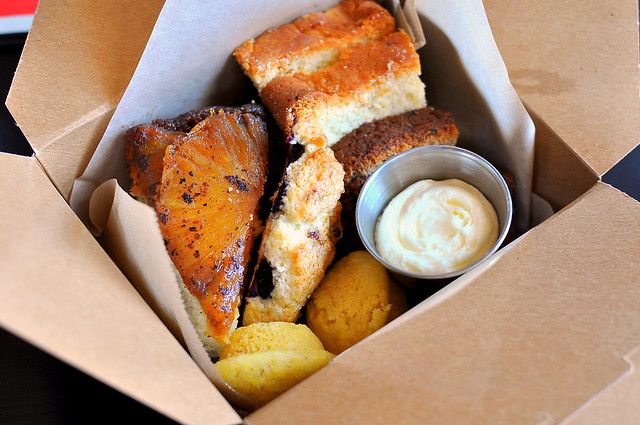 We nibbled on the the Baker’s Bread Box ($8) as we perused the menu and finalized our game plan. The array of fresh-from-the-oven goodies included a wedge of pineapple brown sugar coffee cake, slices of lemon-rosemary and banana bread, corn muffins, and a blueberry scone. House-made butter was on hand for swathing each bite in richness.

While we found some of the offerings a touch dry, namely the coffee cake and the lemon-rosemary bread, the majority were well balanced and a delight to dig into. 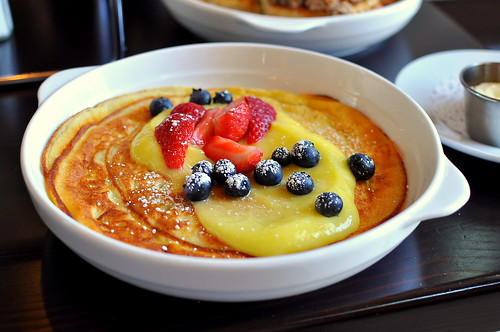 It’s always tough having to choose a sweet or a savory main course at brunch time, but fortunately I didn’t have to with this group of food-loving gals. We shared everything that came out of the kitchen (and then some).

The ricotta pancakes with lemon curd and fresh fruit ($8) were downright awesome. The larger-than-my-face but thinner-than-my-waist pancakes were beautifully browned, while the curd was just tart enough. 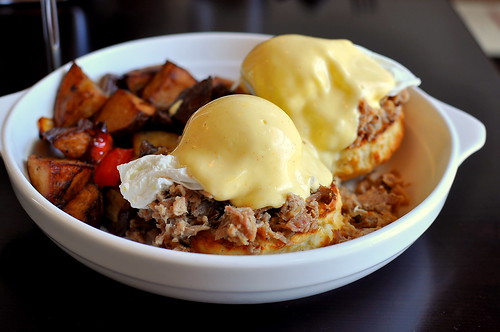 We also adored the pulled pork, which was served atop an Asiago biscuit with poached eggs and hollandaise sauce ($11). A couple shakes of Tabasco sauce coupled with the perfectly runny yolks was all that was needed to complete the package. God, I love biscuits. 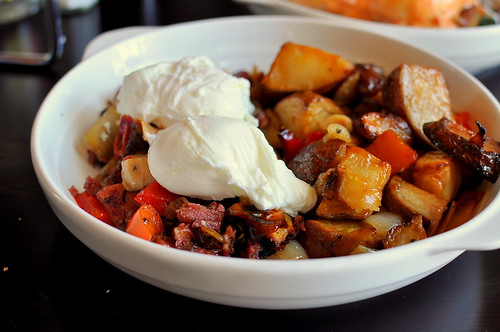 The pastrami hash with sautéed peppers, onion, fingerling potatoes, and poached eggs ($12) struck a similarly delicious note to the pulled pork number. Considering how great the pastrami is at The Oinkster, it was really no surprise that the version here was tops as well. 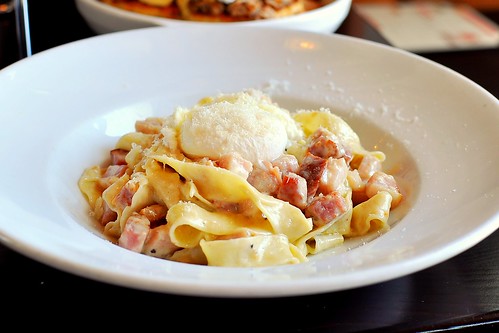 The hits kept on coming with the carbonara pasta with bacon confit and a poached egg ($12). Coated in cheesy, creamy goodness, the ribbons of house-made noodles tasted absolutely luxurious. I can’t wait to eat this again when I return for a proper dinner. Squee! 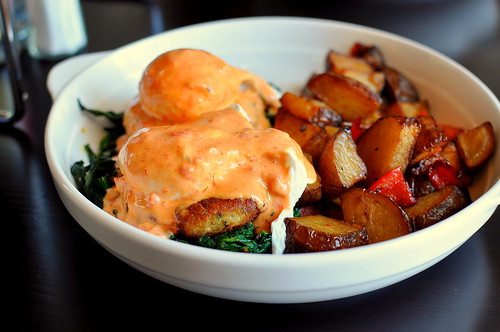 The crab cakes ($16), which were served on a bed of spinach with poached eggs and choron sauce, were packed with plenty of crab meat and caramelized just right. 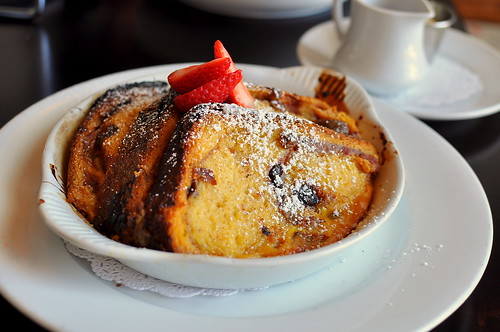 We were initially going to order just one of the two sweet items on the menu, but quickly came to our senses and asked for both. The baked cinnamon raisin French toast ($8) didn’t disappoint. It had a custard-like quality that was wonderfully decadent and satisfying. Maple syrup and butter were served on the side. 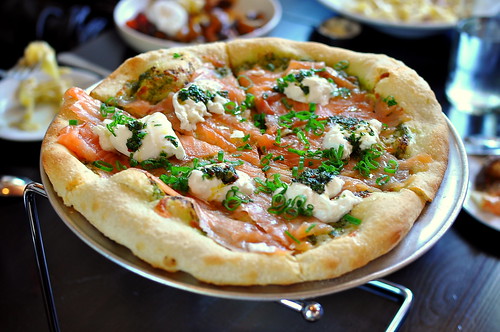 And finally, we shared two pizzas. The “Breakfast” pie (not pictured) came topped with fingerling potatoes, applewood bacon confit, fennel sausage, mozzarella, pomodoro, and eggs ($14), while the “House Smoked Salmon” ($16) was smothered in pesto and prettily garnished with mozzarella, burrata, and scallions. Both were fabulous, but I gave the smoked salmon a slight edge because I had overdosed on runny eggs a few courses earlier.

Canele has long been my favorite place to brunch on the east side of town, but ever-growing lines have kept me from becoming a regular. Maximiliano’s brunch spread is just as great, and as an added bonus, the restaurant is closer to home and currently crowd-free. I think I’ve found my new favorite.