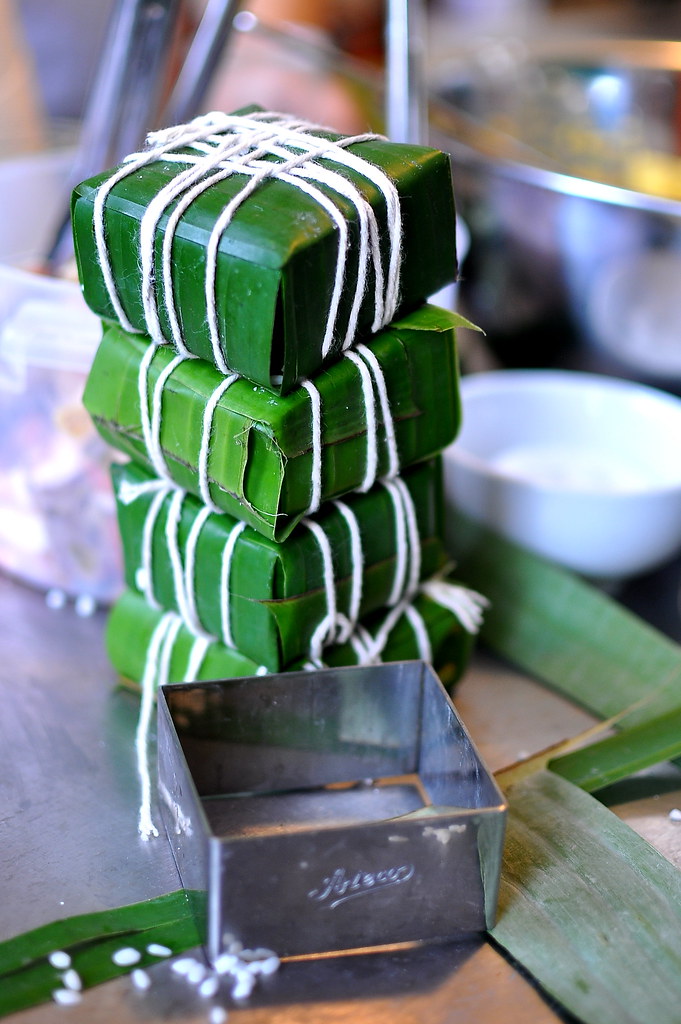 Growing up, Tết was all about not screwing up. It was imperative that on the first day of the New Year, everything ran as smoothly as possible, which meant acing tests, being respectful to my elders, and not arguing with my brother. My mother made me believe that everything that happened on this day, both good and bad, would be repeated throughout the year. This superstitious notion scared me straight into action and, truth be told, continues to taunt me as a full grown adult.

These days, Tết has become less about “being good” and more about gathering with family, cleaning house, and of course, honoring food traditions. There are many dishes associated with the holiday including candied ginger and coconut, braised pork, and preserved pineapples, but the most iconic and essential of all is the square and squat bánh chưng and its cylindrical cousin bánh Tết. 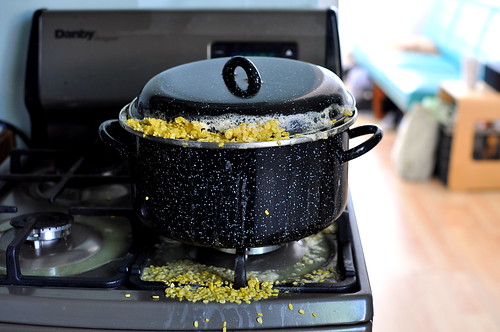 In honor of the upcoming New Year, which falls on February 10th, a group of friends and I gathered to tackle making bánh chưng from scratch. While we were all wholly enthusiastic about the task, none of us were very experienced, as evidenced by our poor, boiled-over mung beans early in the day. 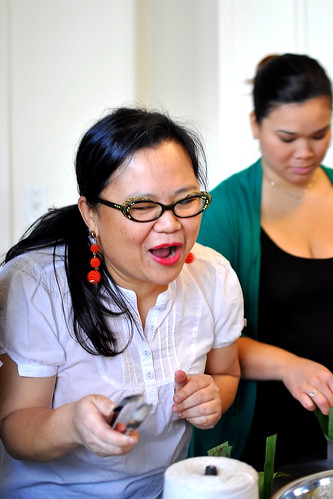 Leading the charge was Chef Diep Tran of Good Girl Dinette in Highland Park. Diep didn’t have a recipe (or YouTube tutorials) to guide us this afternoon, just vague memories from years ago of preparing bánh chưng with her grandmother. 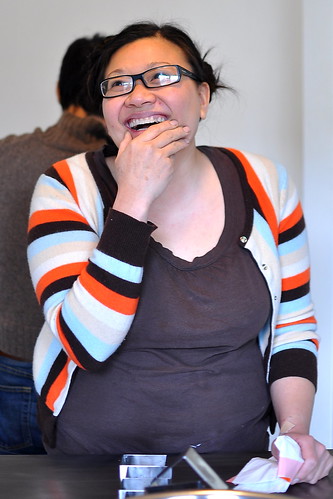 Chef Minh Phan of Beachwood Cafe in Hollywood volunteered her kitchen for our brave experiment. She also busted out some awesomely unorthodox stuffage for the bánh chưng including mulled pears and dates. This was clearly not going to be my grandma’s bánh chưng. 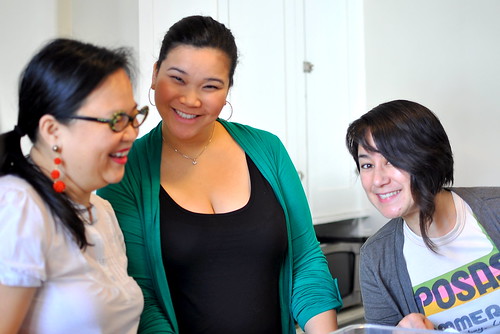 Also on hand for the festivities was Quyen from Kitchen Runway (center) and fellow former Saigon expat Erin (right). Not pictured but not forgotten were Tien, Vy, Jade, Anita, and Truc. 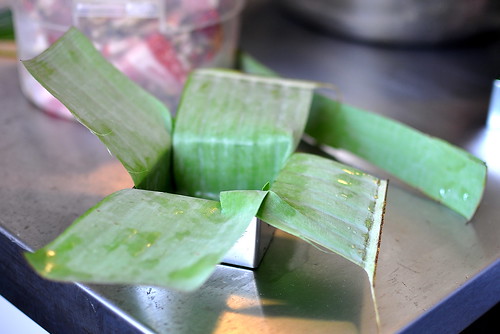 Traditional bánh chưng are hefty things measuring six inches by six inches and weighing in at close to a pound. Diep procured smaller metal molds, about three inches by three inches, from Sur la Table in order to reduce the cooking time; full-sized bánh chưng can take up to 12 hours to cook through.

To start, we carefully lined the molds with fresh banana leaves, making sure that the edges were padded to avoid any spillage or leakage. 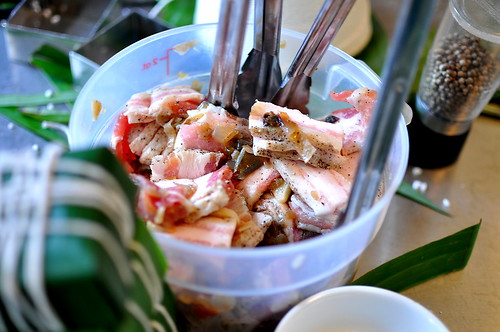 We kept the filling mostly traditional for the first batch. Diep marinaded the pork belly overnight in sauteed garlic and shallots with plenty of black pepper and fish sauce. 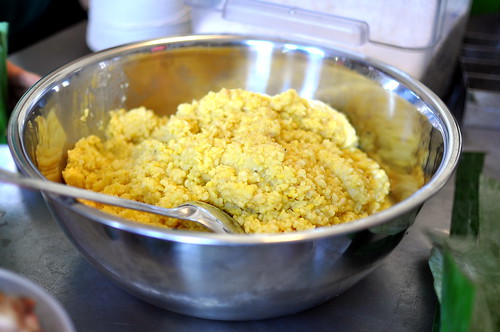 Cooked mung beans were paired with the pork belly. We left the beans unseasoned, but next year we’ll be sure to jazz ’em up with salt and black pepper. 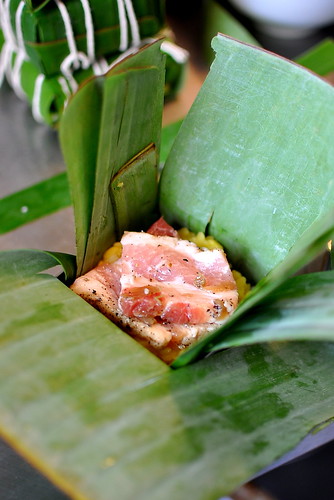 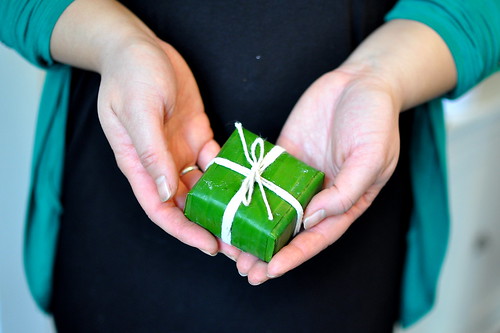 I was downright pitiful when it came time to assemble the bánh chưng, but my companions made beautiful, neat parcels. 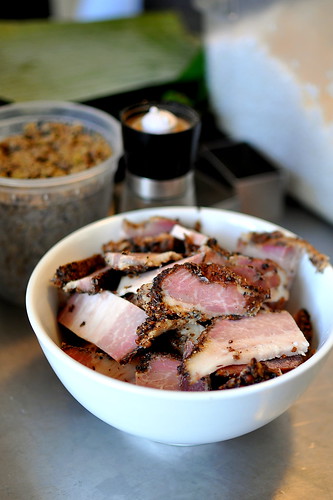 For round two, Diep prepared a most enchanting Vietnamese bacon that was cured in fish sauce, rubbed with a plethora of spices, and smoked in applewood. We paired the bacon with prepared lentils. 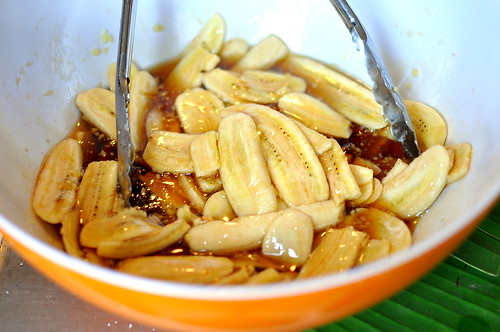 For the third and final batch, we made a sweet version with ripe baby bananas macerated in maple syrup and fresh ginger. We topped this one off with a dollop of luscious coconut cream. We snuck some cooked bacon into a few of the sweet bánh chưng just for kicks. 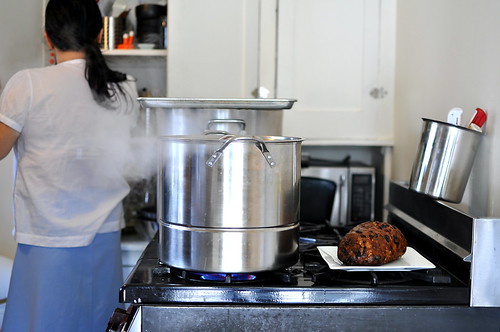 To cook the bánh chưng, we steamed the parcels for one full hour, which gave the glutinous rice enough time to bloom without becoming mushy. 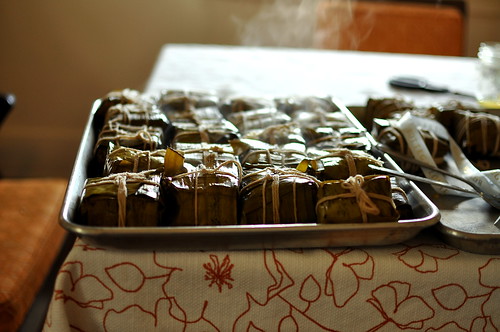 As soon as the bánh chưng were removed from the steamers, we dug right in. Considering how little know-how our crew had at the start, the results were straight up delectable. Bacon and lentils were made to be cradled in between layers of sticky rice! All that was missing was dưa món, sweetly pickled nibbles that are traditionally served alongside. 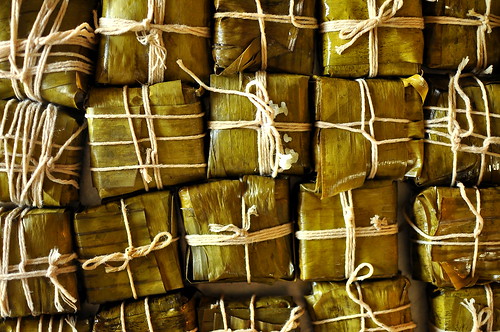 I know I’m a little early, but I’ll go ahead and say it anyway: chúc mừng năm mới!