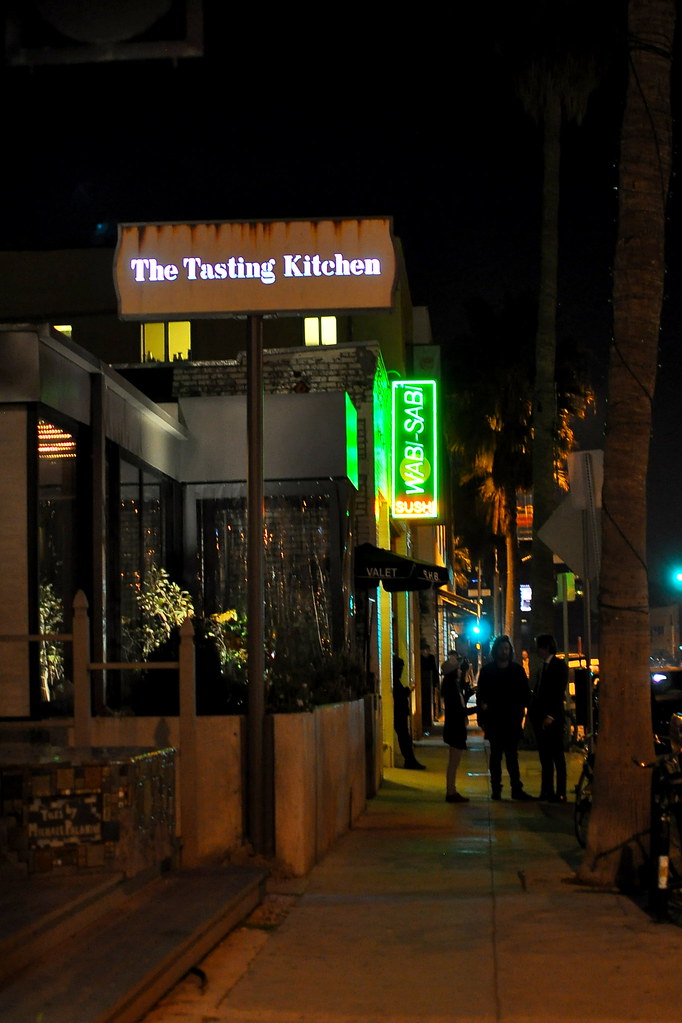 The first ten days of 2013 have been absolutely glorious. The Astronomer and I spent New Year’s with my lovely grandparents, which included a parade of roses followed by a feast of roasted meats. Next, I was spoiled rotten by my friend Sarah with sensational sweets and even more sensational girl talk at The Hart & The Hunter. During the first weekend of 2013, The Astronomer and I had a blast showing our college friends some of our favorite spots in the city—Persian delights at Raffi’s, strolling in Griffith Park, dinner at Ruen Pair, cocktails at 1886, and a dance party in our apartment.

The fun kept on coming this week. The Astronomer and I attended a quirky event called Nerd Nite at a Venice bar on Tuesday night and followed it up with a stupendous late night dinner at The Tasting Kitchen. We were joined by Lien, our favorite Venetian—it’s her favorite restaurant after all. 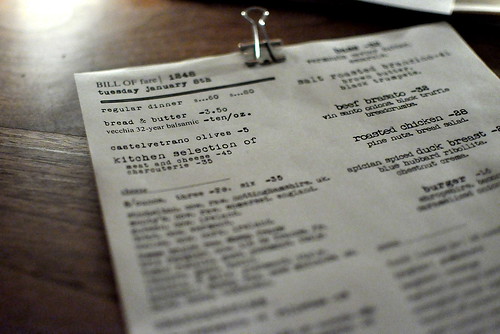 Chef Casey Lane from Clarklewis in Portland was called in to transform A.K. Restaurant Bar + Grill  into The Tasting Kitchen in the summer of 2009. Along with his former Clarklewis crew, he morphed the Scandinavian eatery into an ingredient-driven powerhouse featuring a daily changing “Bill of Fare” that includes cheeses, charcuterie, small plates, larger proteins, and hand-made pastas. 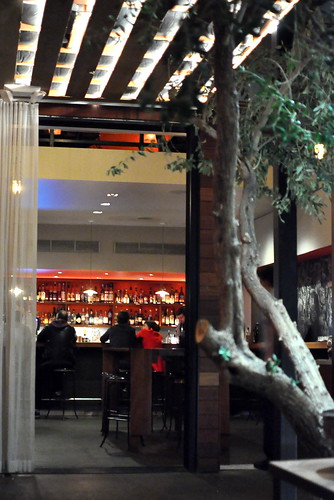 The space, the epitome of California cool, coupled with the kitchen’s incredible cooking, has made this restaurant one of the toughest reservations in town. Our party of three was seated in the front dining room among the trees. 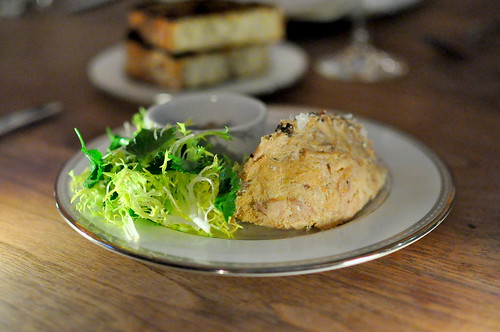 We started with an order of pork rillettes served with grilled bread ($13), which was as memorable as Lien had promised. The ratio of shredded meat to fatty goodness was balanced just so. Also on hand to reel in the richness were coarse salt, whole grain mustard, and lightly dressed frisee. 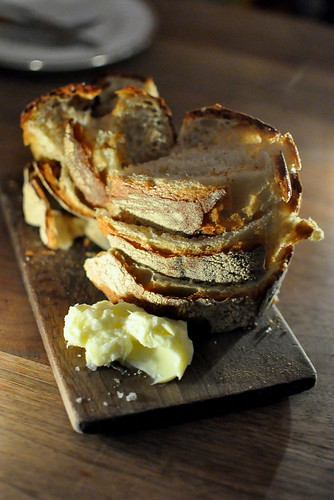 I’m generally not a proponent of the trend of charging for bread and butter, but The Tasting Kitchen made me a believer tonight. The house-made bread ($3.50), which arrived crusty on the outside and steaming on the inside with perfectly spreadable butter, was nothing short of spectacular. This plank of heaven is an absolute must for anyone who appreciates the simplistic beauty of well-executed bread and butter. I would’ve gladly paid twice as much. 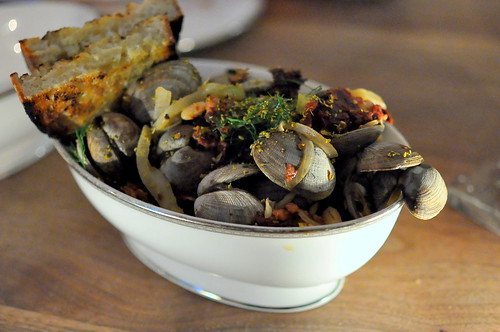 Rounding out our trio of starters was a bowl of steamed clams fancied up with plenty of chorizo, tomatoes, white beans, and fennel ($20). The portion was mighty generous, while the flavors were most appealing. 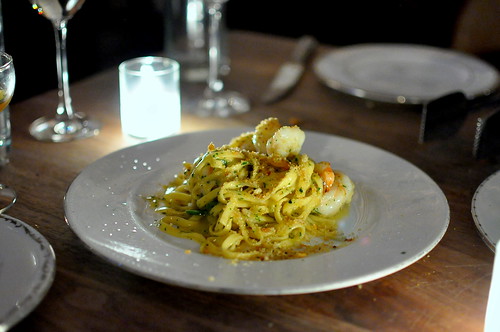 A trio of made-from-scratch pastas followed next. While all three creations were damn delicious, it was the spicy tagliarini with shrimp and serrano ($22) that had my fork twirling up more than my fair share. Belated apologies to my dining companions. 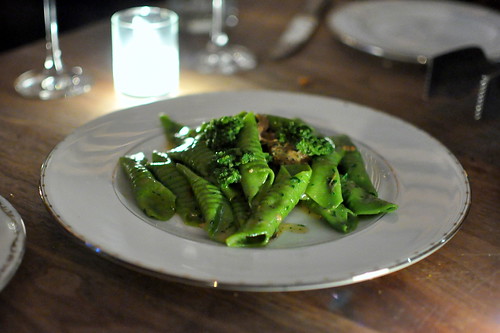 The garganelli verde ($26), which was colored a fetching shade of spinach green, was paired with milk-braised veal and a green olive salsa. The flavors here were the most subtle of the suite, but they still managed to bring on the oohs and ahs, especially the bites with veal. 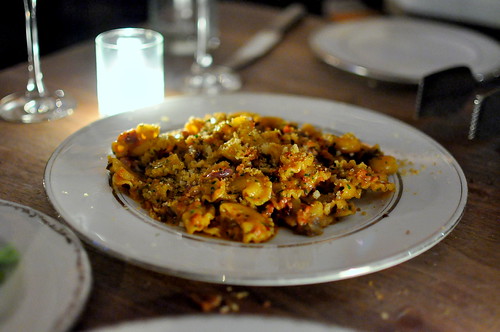 The creste di gallo ($20), which was described poignantly as “macaroni with mohawks” by our waiter Max, was The Astronomer’s favorite noodle of the night. The toothsome mohawked macs married beautifully with the Calabrian sausage and chilies, radicchio, and breadcrumbs. This one was deeply savory and satisfying. 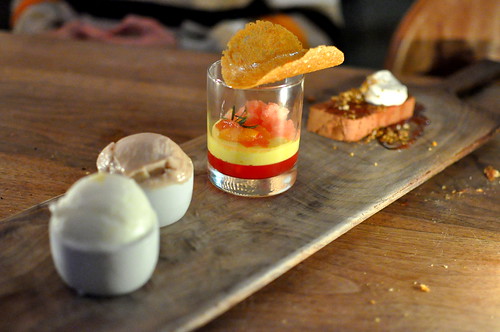 Our final bites of the night included buttermilk sorbet, toasted hazelnut gelato, tre agrumi ($11), and a chocolate walnut semifreddo ($12). While The Astronomer and Lien were positively smitten with the tangy buttermilk number, the tre agrumi with its layers of blood orange, grapefruit granita, and rosemary leaves was my sweet finish of choice.

My first meal at the The Tasting Kitchen was a roaring success, and I cannot wait to return to sample more of the pastas—there are over a dozen different varieties offered each evening. I’ve also heard amazing things about weekend brunch, especially the savory waffles paired with “Fried Clucks” and the sausage biscuit sandwiches ladled with rich gravy. I’ll be back shortly.
—