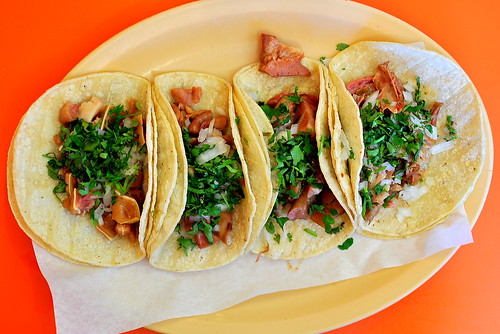 While the Mexico City-style cooking at Metro Balderas is appealing any day of the week, it’s especially enticing on Saturdays and Sundays when carnitas are on parade. Weekends here are dedicated to glorious piggy parts, lovingly fried in lard then slow-cooked and braised in natural juices before being tucked into a corn tortilla and garnished with diced onions and chopped cilantro.

The Astronomer and I warmed up with the maciza (shoulder) and the costilla (ribs), the least adventurous cuts of the eight on offer. The former was more or less a mound of pulled pork, while the latter was lean, mean, and caramelized. Next, we tucked into the cuerito (skin) and trompa (snout), deliciously gelatinous morsels that soaked up the braising liquid like a porcine sponge. 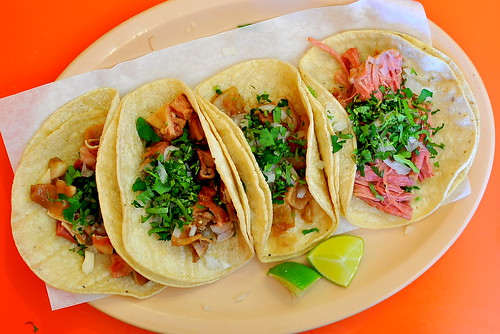 We saved the best bits for last: oreja (ear), nana (uterus), buche (stomach), and surtida, a combination of all the cuts minus the nana. Each one was a textural powerhouse, crunchy yet tender and salted to perfection. If a favorite had to be chosen, it’d be a toss up between the beguiling nana and the enchanting oreja. Just pick up one of each and call it a draw.

Metro Balderas’ weekend pork service was made for swine-hards.