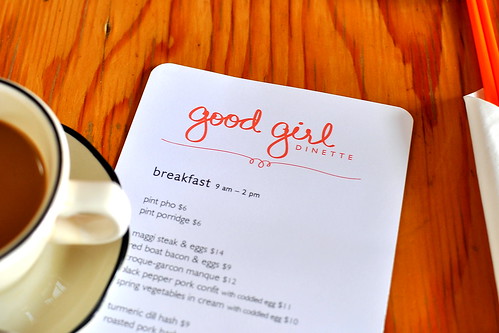 Good Girl Dinette’s Chef Diep Tran loves breakfast, especially ones taken leisurely without consideration for time or caloric intake. She’s been toiling behind the scenes, crafting and tweaking her breakfast menu for the past year now, and she recently rolled out the goods for all to devour and crave. 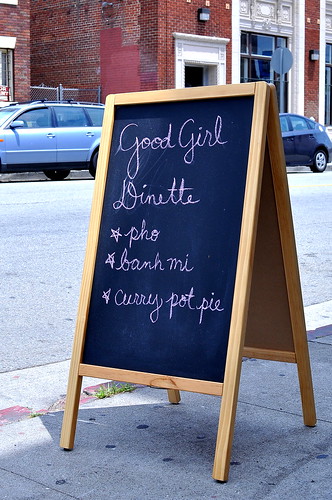 “The menu for me is a snapshot of what it felt like to grow up in the ’80s, in Cerritos, being Vietnamese,” explained Diep in a recent Q&A.  Among her sources of inspiration for the new menu were “Breakfasts of porridge, pho, and fried eggs splashed with Maggi; Lucy Maud Montgomery, Laura Ingalls Wilder, and MFK Fisher books from the library; weekend cooking shows on PBS.” 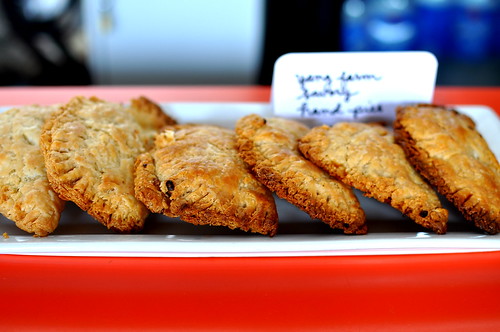 As Diep was developing the menu and testing recipes, The Astronomer and I served as eager guinea pigs as she perfected her Red Boat-cured bacon, Croque-Garcon, and toasted pound cake.

After months of anticipation, we finally sat down this morning to experience the perfectly edited menu in its entirety. And it was well worth the wait! 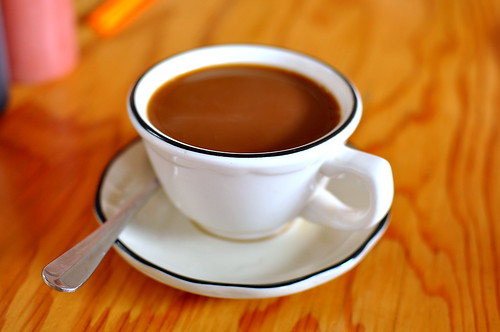 I’ve become a coffee drinker as of late, a major development I might add, so I started off with a cup of Vietnamese-style coffee. The Dinette brews Groundwork and doesn’t skimp on the condensed milk. I like my ca phe very, very sweet. 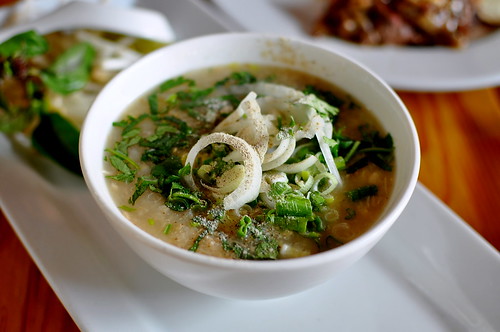 From the caffeinated start, we proceeded to order nearly every item on the menu. And with the assistance of our pals Misty and Justin, we polished off just about everything.

The “pint porridge” ($6), a gloriously comforting bowlful of brown rice, chicken, and Napa cabbage, really hit the mark for me. Growing up, Grandma made chao at least once a week for breakfast before school, and I still find myself craving a warm serving early in the mornings. 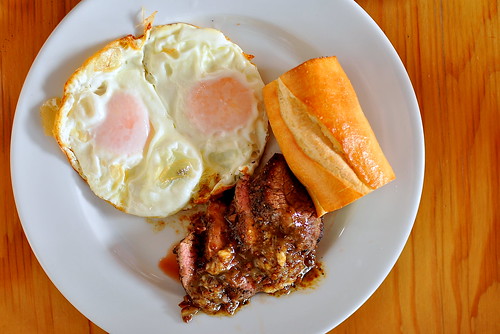 Next up were the “Maggi steak & eggs” ($14) served with a toasted baguette. During R&D, I tried my darnedest to convince Diep to serve this dish on a sizzling cow-shaped platter like they do in Vietnam, but she resisted at every turn.

As I dug into the perfectly fried eggs, followed by a mouthful of Maggified meat, I must admit that I didn’t miss the moo platter even a little. 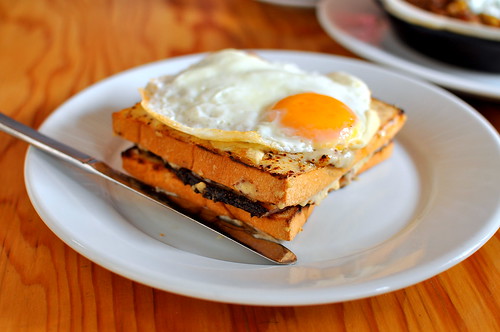 While the first two dishes were riffs on classic Vietnamese breakfast stuffs, the “Croque-Garcon Manque” ($15) was something different all together.

In between two slices of pan de mie were thick cuts of fish sauce-cured bacon and Bechamel sauce. A fried egg set it all off. I loved it all, but the bacon stole my heart. 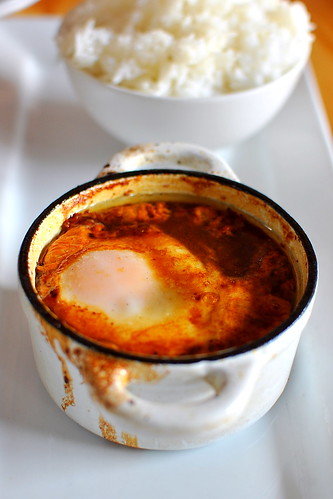 Making an appearance from the lunch and dinner menu was the “Black Pepper Pork Confit” ($11) served with a bowl of steamed white rice. The addition of a gently coddled egg transformed this savory staple into a proper brunch-time affair. 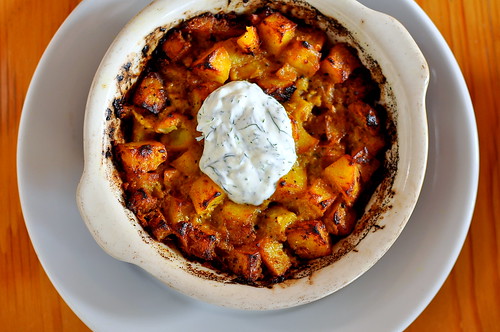 And then came two hashes, one meat-free and the other not so much. The vegetarian-friendly turmeric dill hash ($9) was inspired by Hanoi’s cha ca Thang Long, a turmeric and dill fish fry that is nothing short of incredible. Here, the crisp and caramelized potatoes proved to be an ideal canvas for the dill and turmeric to do their delicious thang. 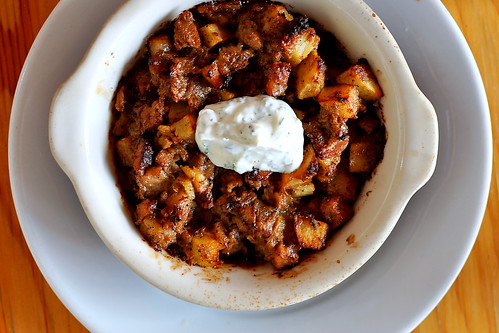 The roasted pork hash ($11) was equally successful, with an abundance of pork punctuating the potatoes. The dollop of dill-infused creme friache was just the thing to brighten the whole shebang. 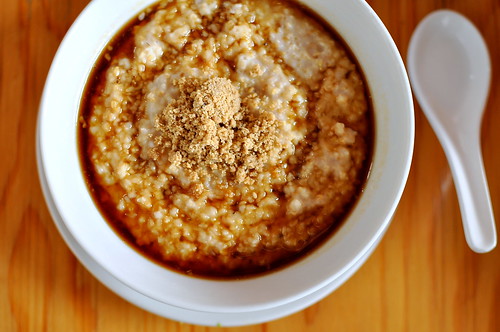 A must-order for me on all future breakfast visits is the “Coconut Oatmeal” ($6), steel cut oats soaked and simmered in coconut milk and drizzled with ginger maple syrup. Seriously, what could be better? Diep was inspired by the flavors of che troi nuoc, one of my all-time favorite Vietnamese desserts, for this creation. Mmmm! 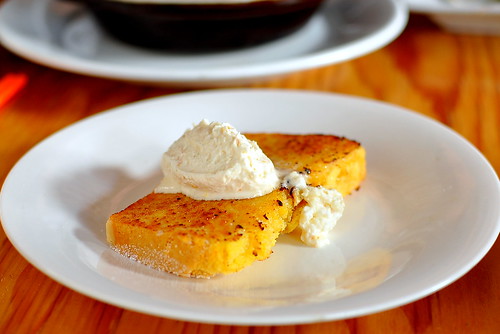 And then there was the toasted pound cake ($5) topped with whipped cream. From the caramelized edges to the citrus-infused cream, there were so many reasons to swoon about this one. 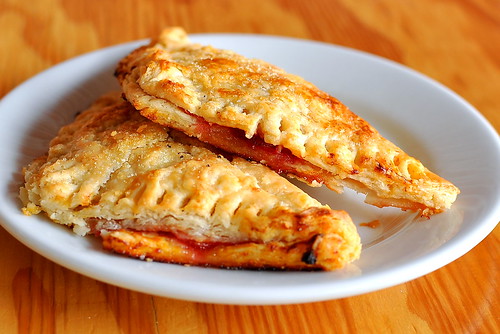 To finish, gorgeously golden handpies ($5) filled with apricots and cherries from K&K Ranch. The fillings will likely change from week to week depending on what the farm is growing, but it’s practically guaranteed that you’ll fall head over feet.

Mornings will never be the same again.