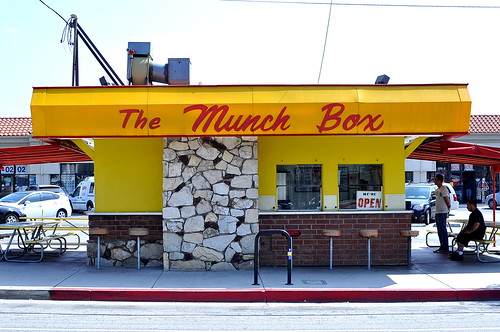 Instead of driving straight from Pasadena to Thousand Oaks for a family gathering a few weeks back, The Astronomer and I took a roundabout route through Burbank then to Chatsworth for doughnuts, burgers, and more doughnuts. We rarely, if ever, travel this far north and west, so we wanted to make the trip worth our while.

What was really terrific about this jaunt was that it felt like a legitimate road trip even though we never left county boundaries. The vastness of Los Angeles never ceases to impress me. 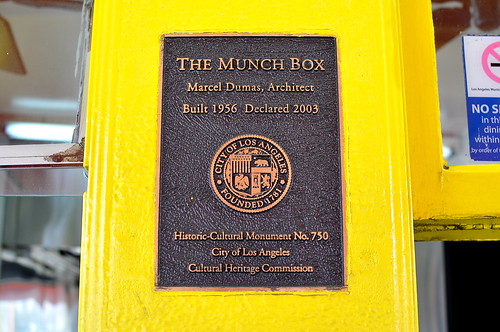 My heart welled up with pure joy as we approached the bright yellow building on Devonshire Street. The Munch Box has been around since 1956 and is on the Cultural Heritage Commission‘s list as one of the best surviving examples of Googie architecture.

Today, the stand is owned by Buck Barker, his wife, Claire, and their two children, Julie and Andrew. Mr. Barker bought the eatery in 1985 from his uncle, John Kent, who was the restaurant’s original owner. 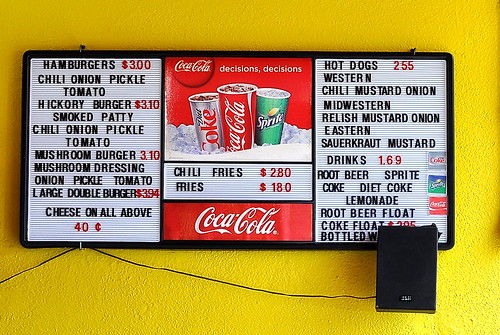 The menu hasn’t changed too much since The Munch Box first opened 57 years ago. While many diners were downing dogs this afternoon, The Astronomer and I stuck to the hamburgers; it was what we were in the mood for. 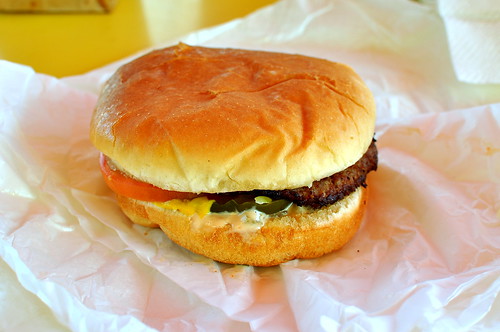 First up was the Cheese Burger ($3.40), a simple situation containing chopped onions, pickles, tomato, and special sauce between two plushy white commercial buns. The meat of the matter was thin and charred nicely enough. 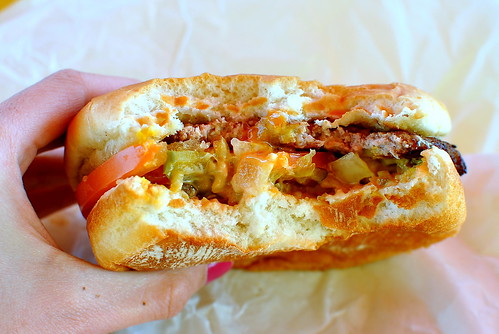 Biting into the burger, The Astronomer and I couldn’t get over how much it tasted like a classic McDonald’s hamburger, down to the itty bitty onions. It’s funny to think that before McDonald’s sold billions of burgers worldwide, it was a one-off hamburger stand in SoCal very much like The Munch Box. 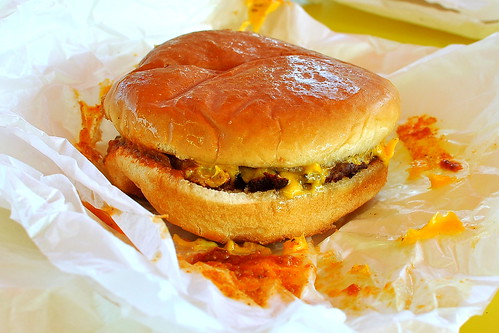 The Hickory Burger ($3.10) was a far messier affair with its “smoked patty,” chili, onions, pickles, and tomato. Upon inquiring with the gal working behind the counter, I learned that the meat’s smoky flavor was imparted by a flavored spray. Sometimes, I think I ask too many questions.

I like chili that’s heavy on the salt and heat and induces heartburn, and unfortunately the blend here was a bit weak for me. Still, the overall package was tasty enough to polish off completely. 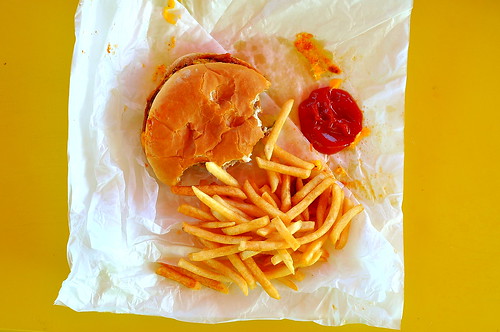 Even though The Munch Box’s food didn’t sweep me off my feet, I would return here in a heartbeat if I were in the neighborhood again. The architecture, coupled with a dose of nostalgia and wonderfully messy burgers, makes for an afternoon well spent.