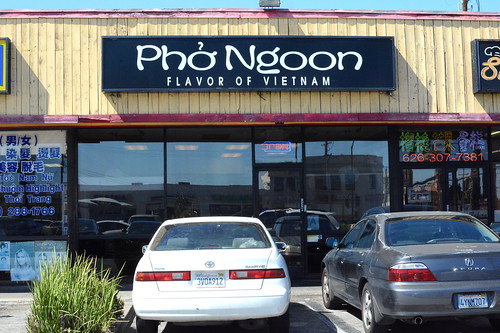 In the mood for Northern Vietnamese fare, The Astronomer and I, along with our friend Courtney, headed to San Gabriel’s Phở Ngoon for lunch. The newish restaurant, which is located in the same plaza as Boston Lobster, offered a lovely change of pace from the Central and Southern Vietnamese cuisine that we tend to favor. 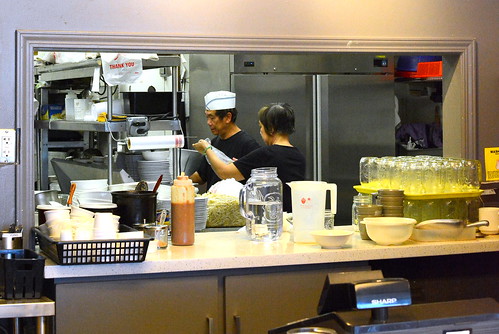 Upon arriving at the modernly appointed restaurant, we were seated promptly and presented with menus. The one-page bill of fare was awesomely concise, consisting of just three starters and ten mains. We shared five dishes between the three of us. 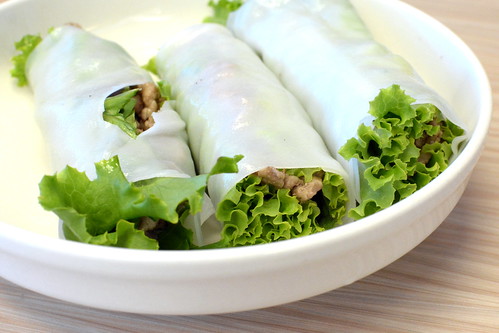 First up was an order of pho cuon ($3.50), a dish that was super-trendy in Hanoi circa 2008 when The Astronomer and I lived in Vietnam. Comprised of thin rice noodle sheets wrapped around lettuce leaves, grilled beef, and fresh mint, the pho cuon was served with nuoc cham for dipping.

While I didn’t care too much for this dish in Hanoi, I quite liked Pho Ngoon’s more robust rendition. 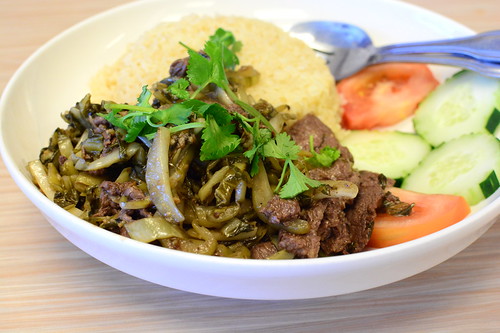 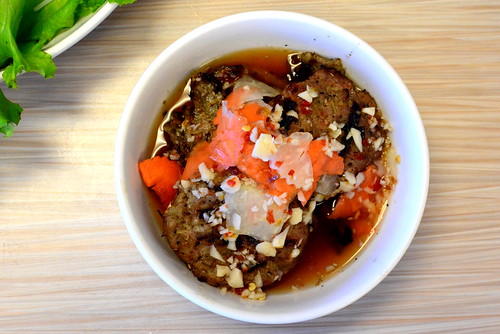 Also excellently executed was the Bun Cha ($7.90), a quintessential Northern Vietnamese dish consisting of charbroiled pork patties and pork belly soaking in a fish sauce bath with garlic, chilies, and pickled daikon and carrots. It was served with vermicelli rice noodles and plenty of lettuce and herbs. Mmm! 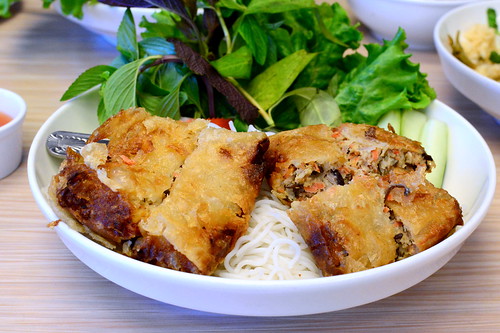 My favorite dish of the afternoon was the Nem Cua Be ($8.90), beautifully blistered egg rolls filled with crab and pork and served over cool rice noodles. I loved how the plump rolls were shatteringly crisp, even when wrapped in herbs and lettuce and dipped in copious amounts of fish sauce. 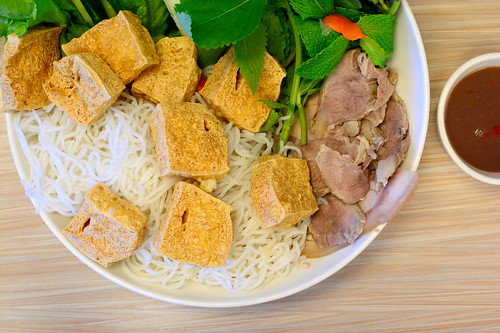 The final dish of the afternoon was the Bun Dau Mam Tom ($7.90), an uber-funky collection of fried tofu and thinly sliced pork shank served over noodles with herbs, lettuce, and mam tom (shrimp paste sauce). This one punched us in the face with its glorious fermentation.

Phở Ngoon is a fantastic addition to my all-star line-up of Vietnamese restaurants in the San Gabriel Valley. Woot!