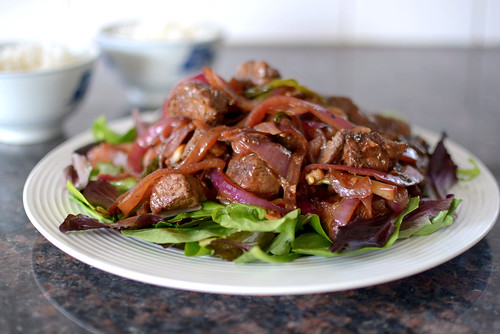 When I was gifted four beautiful steaks this past Christmas, I briefly considered wrapping the fillets in bacon or chopping them coarsely for a tartare. But when it came down to it, The Astronomer and I both desired Vietnamese food, so “shaking beef” ultimately and unsurprisingly won out.

Since my family does not have a go-to recipe for bò lúc lắc, I turned to Chef Charles Phan of San Francisco’s The Slanted Door to guide me through the process. You could say that he’s got a way with shaking beef.

Traditionally, this dish is prepared in a seasoned wok over a flame, which imparts an intense sear on the beef and cooks the entire dish with a flick (or two) of the wrist.

This pared down recipe caters to the home cook and yields immense reward for very little effort. While using a saute pan on an electric stove offers significantly fewer BTUs, the results were most satisfactory. We’ll be making this recipe again and again. 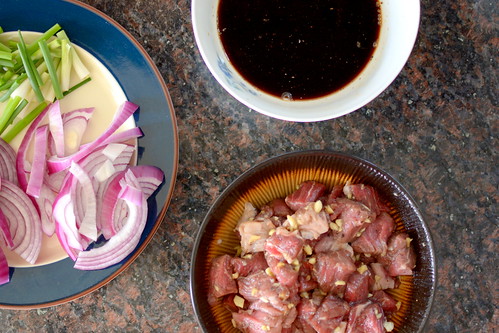 Marinate meat with garlic, half the sugar, 1 teaspoon salt, 1/4 teaspoon pepper and 1 tablespoon oil for about 2 hours at room temperature. (Refrigerate if your kitchen is very warm.) 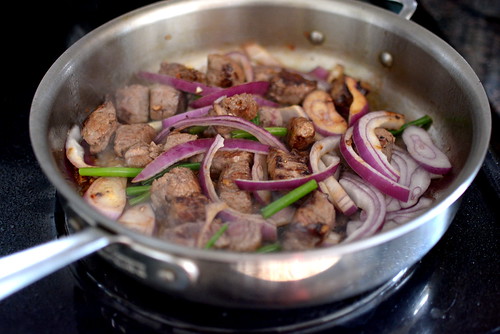 Divide the meat into 2 portions, and do the same with the onion and scallions. Put a wok or a large skillet over maximum heat, and add about 2 tablespoons oil. When the oil smokes, add the meat in one layer. Let it sit until a brown crust forms, and turn to brown the other side. Browning should take less than 5 minutes. 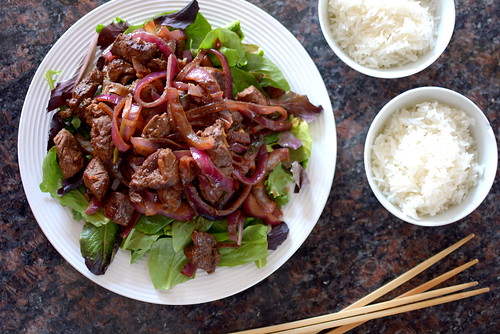 Serve beef over watercress or lettuce leaves, passing salt and pepper mixture and lime wedges at the table.

Recipe by adapted from Charles Phan by the New York Times.