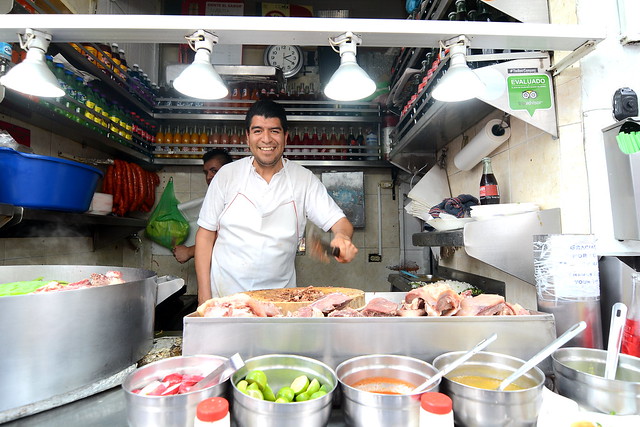 One of the highlights of our Mexico City jaunt was a street food tour with Club Tengo Hambre ($90 per person). Dubbed “Mexico City Street Food Essentials,” the tour took The Astronomer and me, along with two other couples from California, through the Centro Histórico to both well-known and under-the-radar spots. It was a most delicious and delightful way to spend our first afternoon in the city. 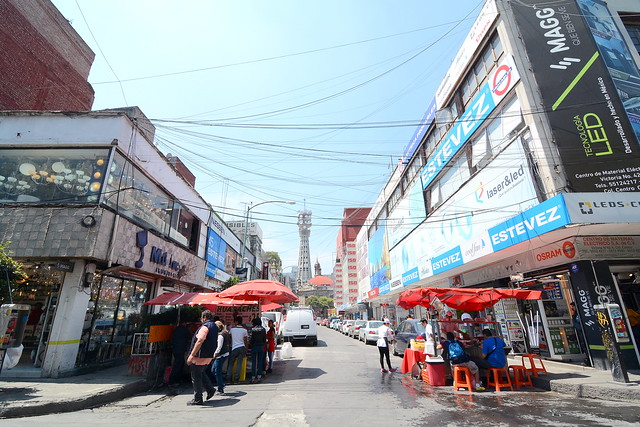 While The Astronomer and I usually relish the spontaneity of travel, we opted for a guided tour because my friend Bill Esparza is one of the founding members of Club Tengo Hambre. I’ve traveled with Bill to Tijuana and Baja a handful of times and know his dedication to seeking out the best food anywhere. There was no question that this tour was going to be worth our gastro-real estate. 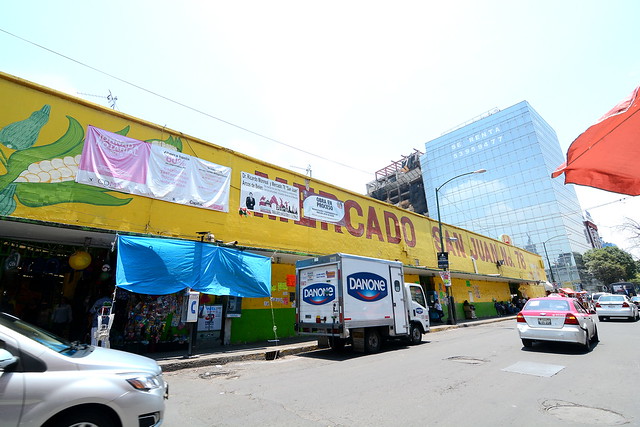 We started the tour in the center of town at the Palacio de Bellas Artes. Mariana, a food-obsessed former chef from the coast of Mexico, served as our guide. In addition to leading us to street food gems, she was awesome to talk to for a local perspective on all things Mexico City. 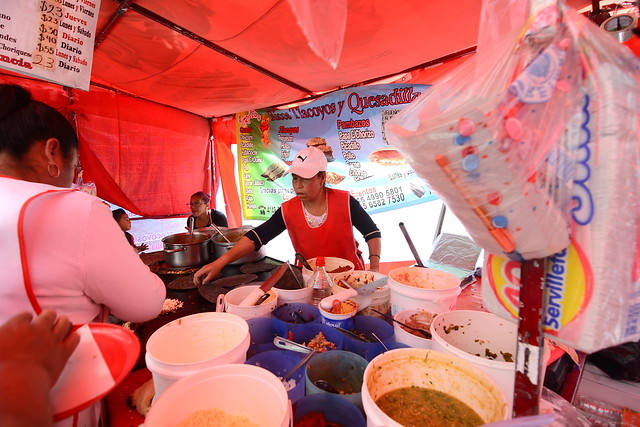 The first stop took us under a red awning where we indulged in a slew of blue corn quesadillas. There were versions stuffed with squash blossoms and others with a chile relleno inside. There were even ones filled with stewed pork. 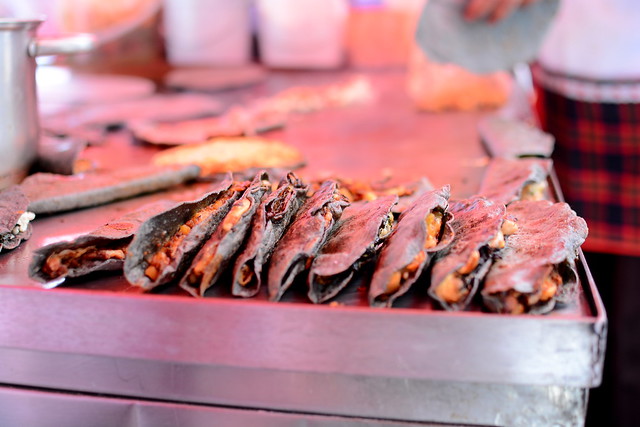 The best of the bunch were the quesadillas with homemade “Mexican ricotta” and huitlacoche (corn smut). According to Mariana, the vendor is from outside the city, where this type of cheese is a specialty. She comes to Mexico City a few times a week to sell her wares and returns home when she sells out. 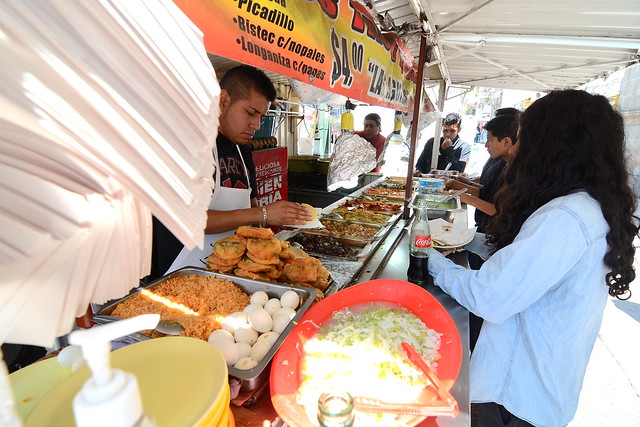 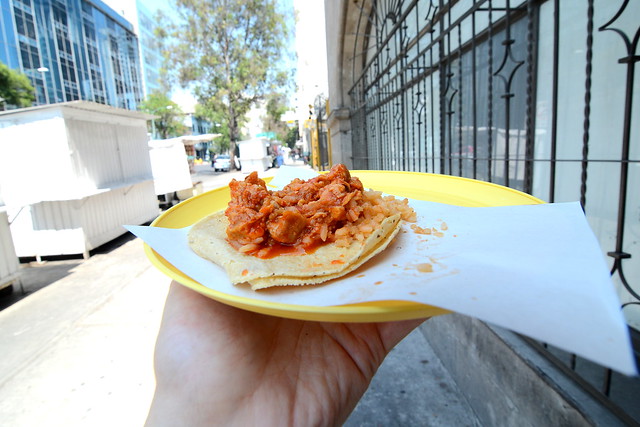 Here, we tried a seriously stupendous pork guisado made from a trifecta of lean meat, fatty belly, and gelatinous skin served over rice. 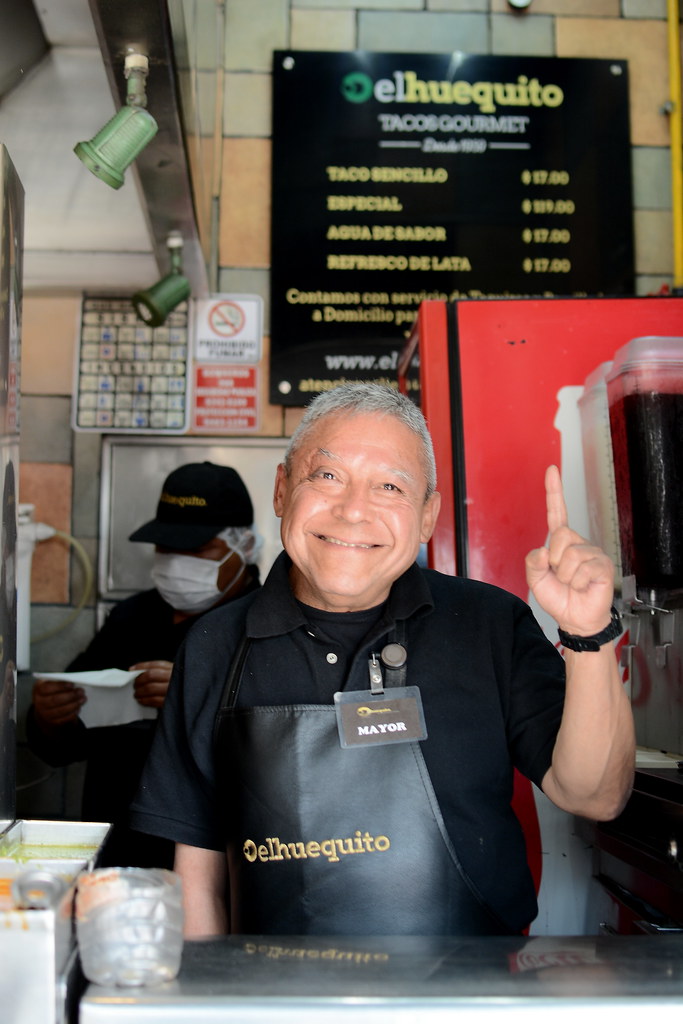 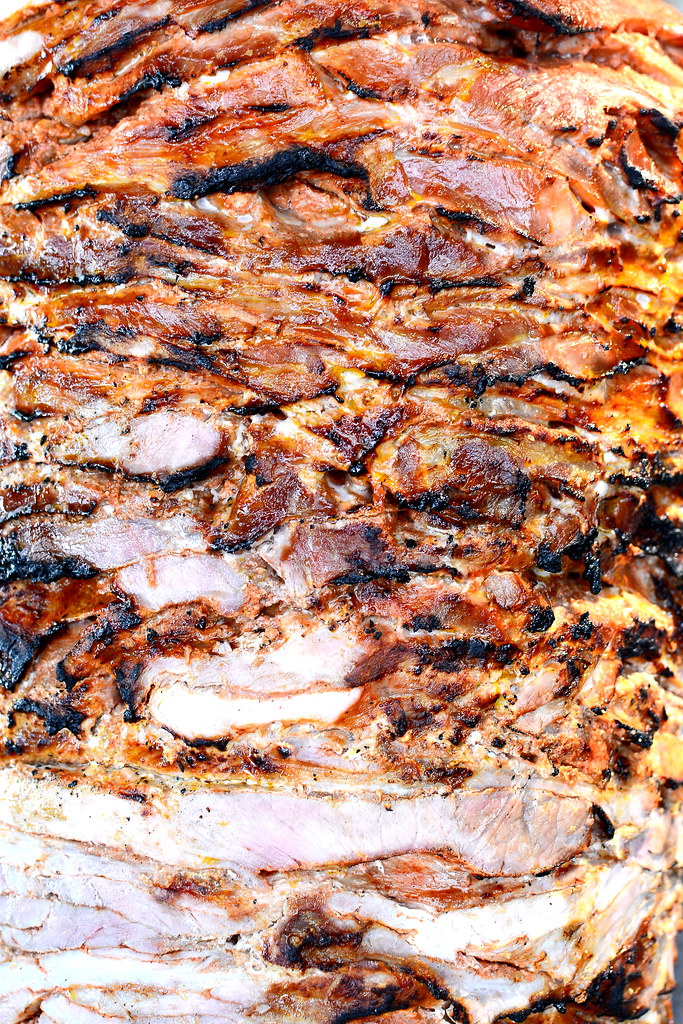 The carefully assembled and carved trompo signaled that these tacos were going to be great. 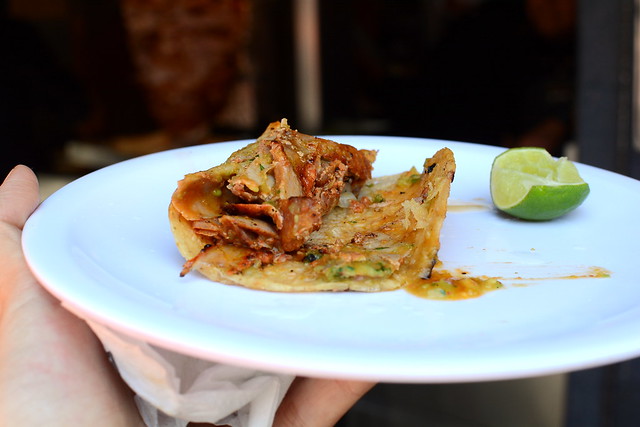 While the meat of the matter was certainly tasty, what really set these tacos apart was the fact that they were grilled to order. The slightly crisped tortilla, coupled with the charred and moist meat, made for one memorable little taco. 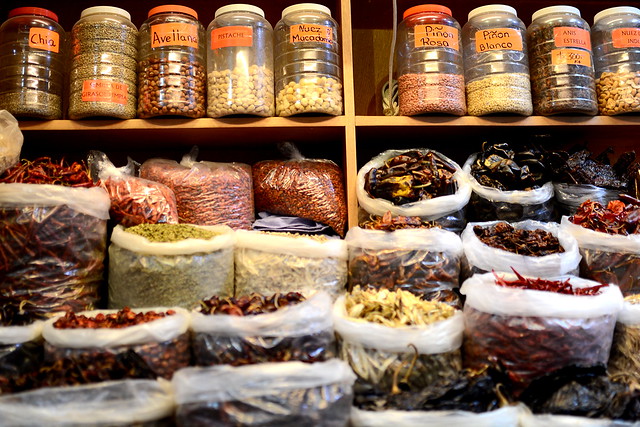 The fourth stop of the afternoon took us to the Mercado San Juan (Calle de Ernesto Pugibet No. 21, Mexico City, Mexico, Mexico). Visiting marketplaces and feeling the heartbeat of the city never fails to be a high point of any international trip. 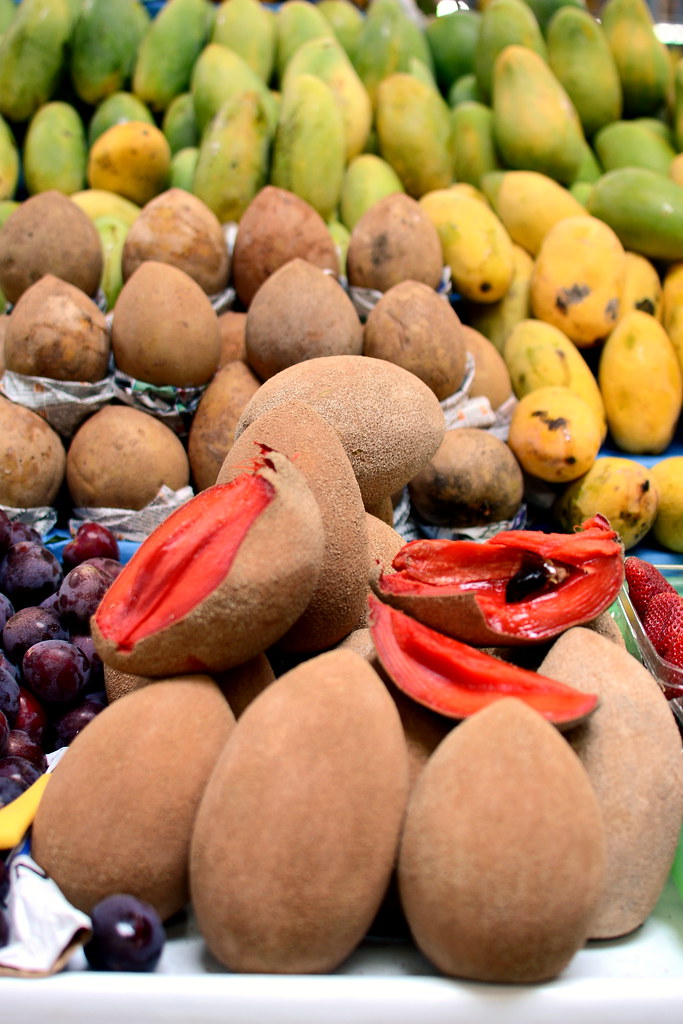 First up was a plethora of tropical fruits to sample. The in-season mangoes were unbelievable, and the mamey sapote (pictured above) hit a creamy note that was really unique. 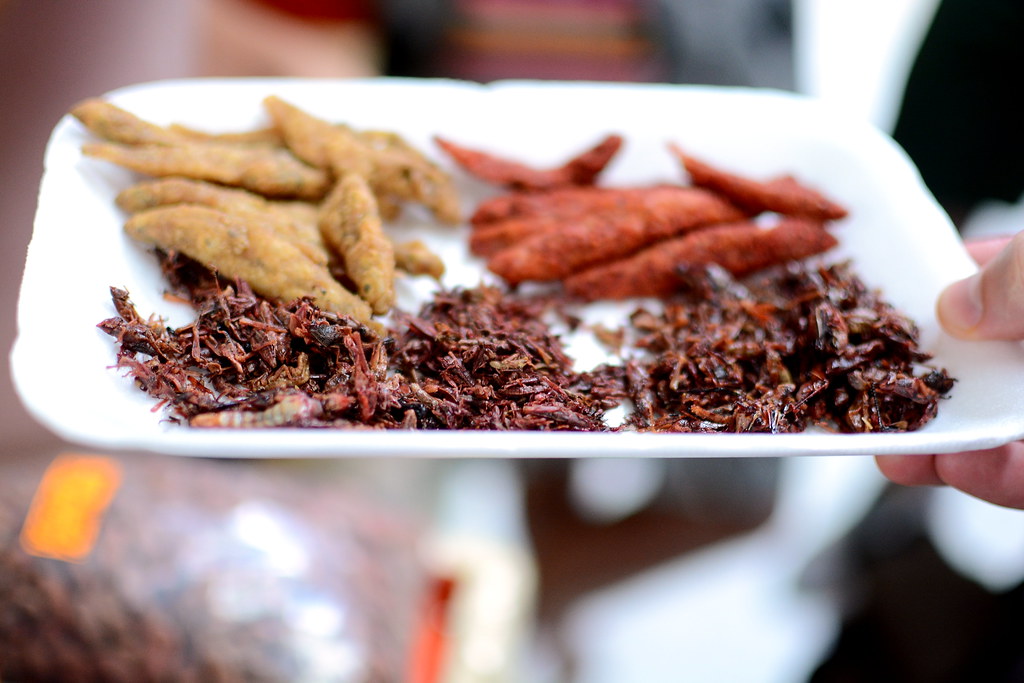 We also visited a vendor specializing in gourmet products from Oaxaca. Here, we sampled crickets, plain and garlicky, as well as fried anchovies, cheese, chocolate, and mezcal. We made sure to purchase some of the chocolate to make hot chocolate at home. 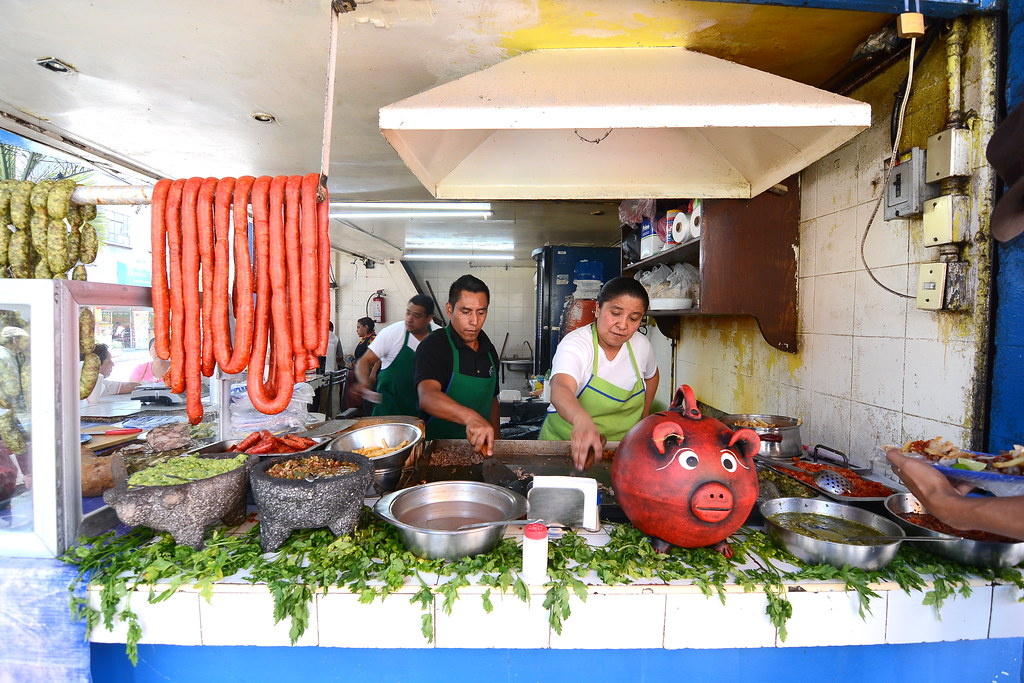 One of my favorite stops was at a charcuterie specialist from Toluca, where we sampled tacos de chorizo (sausage), as well as tacos de queso de puerco (head cheese). 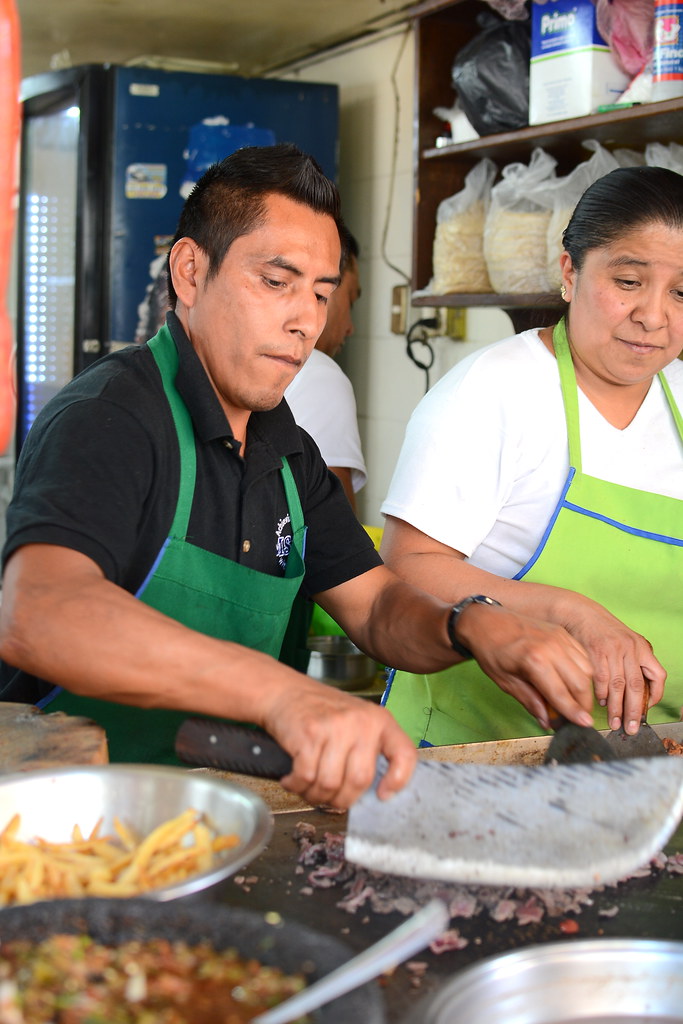 The taco masters were working furiously to fulfill orders during our stop. The smells emanating from this stand were insanely enticing. 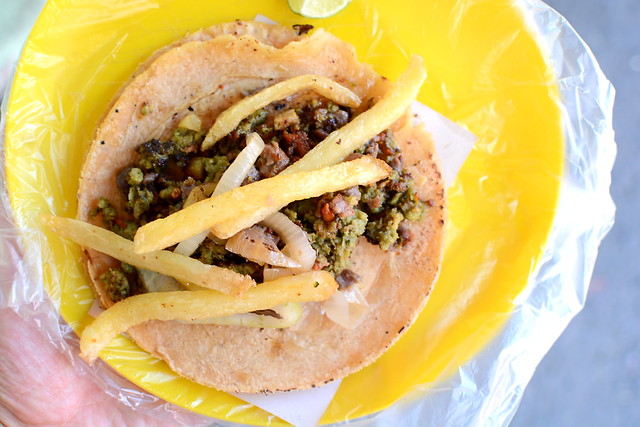 First up was a green chorizo taco topped with grilled onions and French fries. The chorizo, colored green with cilantro and dotted with raisins and nuts, was deliciously different. The addition of spuds made for a filling taco. 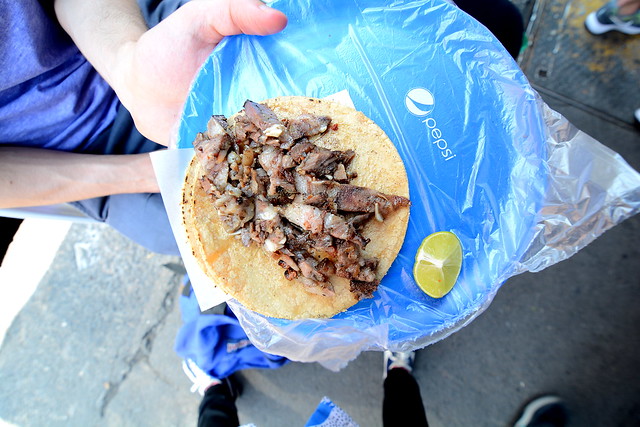 Also great was the head cheese spiced with oregano, vinegar, garlic, and black pepper. I loved how the taqueros chopped up the meat on the flattop, searing some bits and crisping others. 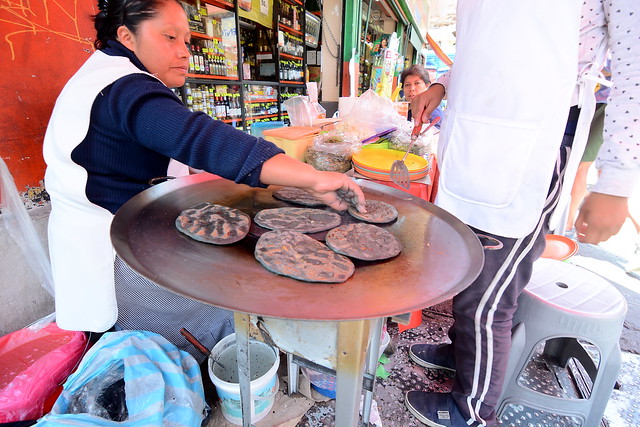 And then there were tlacoyos, pre-Hispanic blue corn cakes filled with beans, griddled on a comal, and topped with cactus, cheese, and salsa. 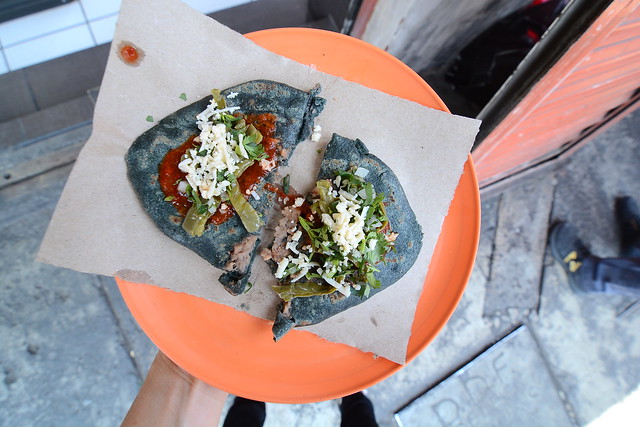 The deeply earthy taste of the blue corn really shined in this preparation. Everything else was just gravy. 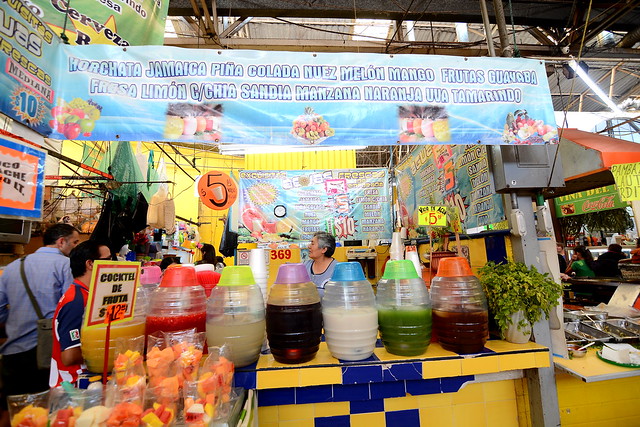 From there we walked to the San Juan Market No. 78 (Avenida Arcos de Belén, Cuauhtémoc, Centro, 06720 Ciudad de México, CDMX, Mexico) for aguas frescas. My limeade was just as refreshing as Mariana promised, while The Astronomer’s horchata was much too sweet. To be fair, Mariana did warn us that the locals enjoy their sweets very sweet. 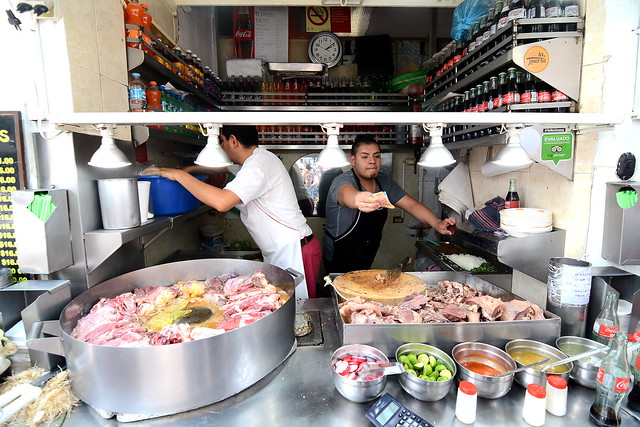 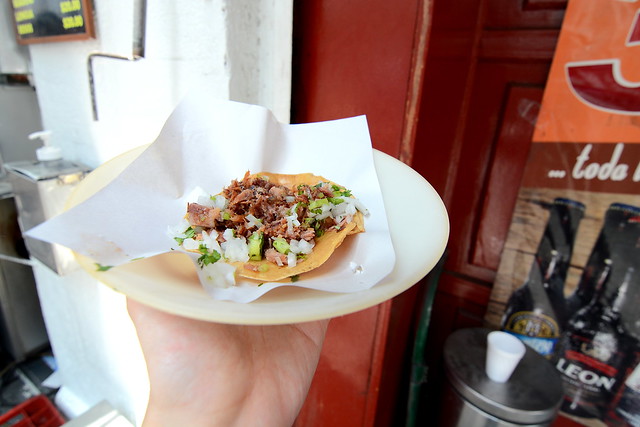 The tripas (tripe) were calling my name. Seared on the flat top before being tucked into the tortilla, the tripe had some bite. A bit of onion, cilantro, and a squeeze of fresh lime juice was all this taco needed. From Los Cocuyos we walked back to the Palacio de Bellas Artes and parted ways with the group.

While the tour covered only a small fraction of Mexico City’s expansive street food scene, The Astronomer and I definitely walked away feeling like we had eaten well and learned a great deal. Spending just 50 hours in one of the most dynamic cities in the world ain’t much, but with pros leading the way, it’s possible to make a notable dent.