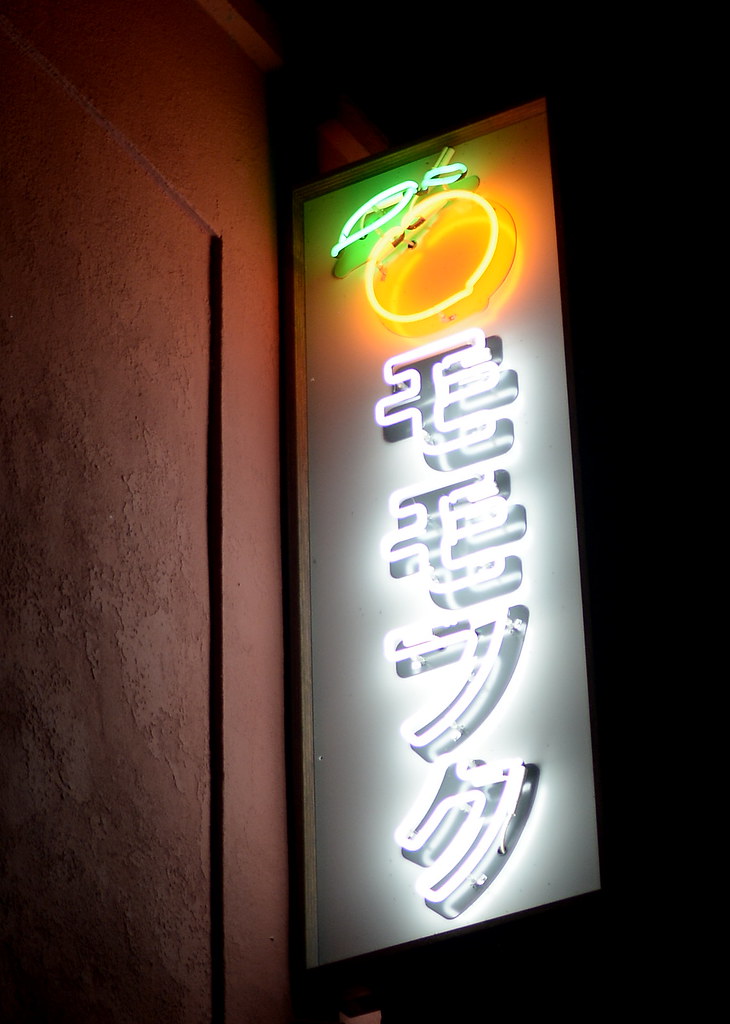 Chef David Chang opened his first Los Angeles restaurant Majordomo earlier this year. Located a little north of Chinatown in an area inhabited by warehouses, the restaurant serves small and large plates of Korean-inflected fare. Note: If you’re interested in how Majordomo launched from soup to nuts, I recommend listening to the “Pre-Opening Diaries” series on The Dave Chang Show podcast.

Parking is ample and easy in this part of town; however, the same cannot be said about reservations. I secured a table for two the day before out of sheer luck—someone must’ve just cancelled as I was perusing possibilities. Pro tip: plan ahead. 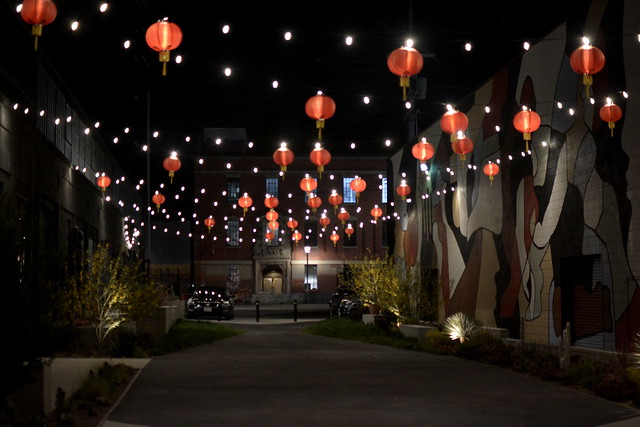 I find it impossible to discuss David Chang’s cooking without first acknowledging his reputation. For better or worse, the two are very much intertwined. As a culinary personality, he always seems to be bad-mouthing something or another or espousing self-assured yet unnuanced views on food and culture. All of this makes me shake my head in disappointment.

As a chef, however, his point of view in the kitchen has always piqued my interest. Since visiting Momofuku Noodle Bar back in 2007, I’ve kept close tabs on his whereabouts whenever I visited New York City—from Ssam Bar to Má Pêche to Milk Bar to Fuku. 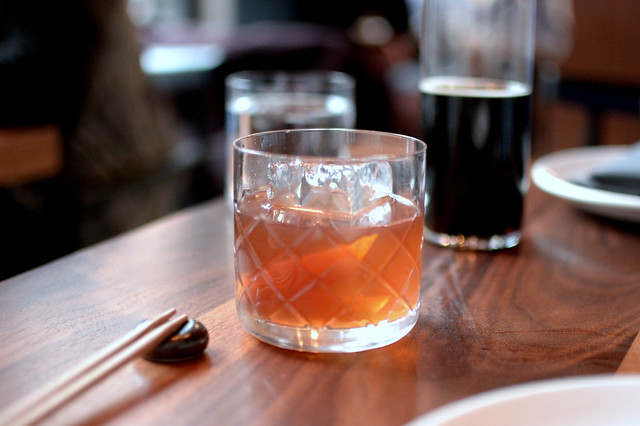 While I have my views of the guy, both good and less-good, I wanted to experience Majordomo from a fresh perspective. All preconceived notions dissipated with each sip of my heady Old Fashioned ($14) made with rye, Bonji (a fermented, cold-pressed liquid seasoning), and bitters. 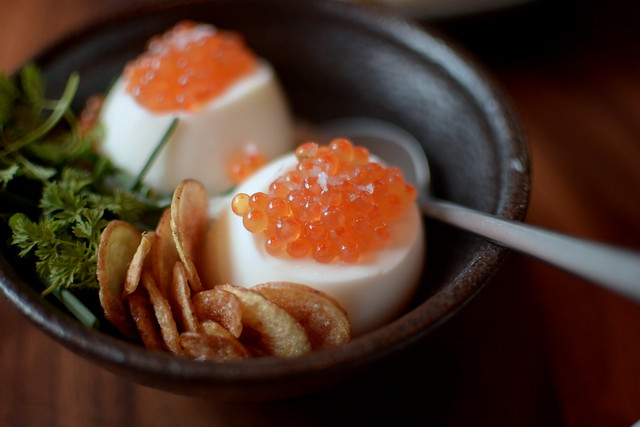 The most enticing section of the menu featured bings, Chinese flatbreads griddled crisp-golden on the outside and tender-fluffy on the inside. The bings are served warm with all manner of accouterments ranging from ham to caviar. The “Eggs & Smoked Roe” ($18) paired deliciously with the flatbread, especially the onion gravy hidden at the bottom of the dish. 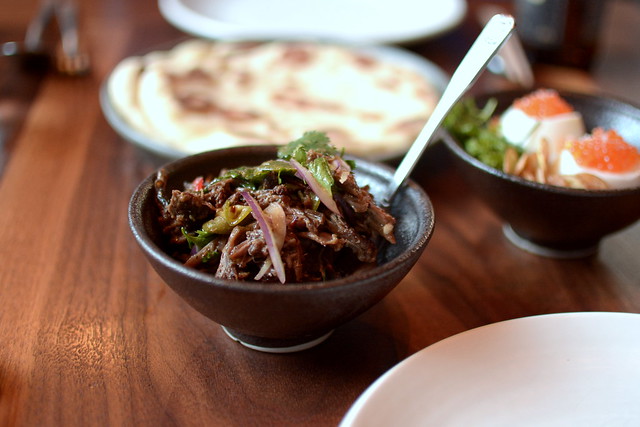 The “Spicy Lamb” ($13) was just as tasty. Here, the bing served as a tortilla of sorts, an apt vehicle for the seasoned and shredded meat. The Astronomer and I have already made plans to return to Majordomo for an entire meal comprised of just bings because they’re so hearty and good. 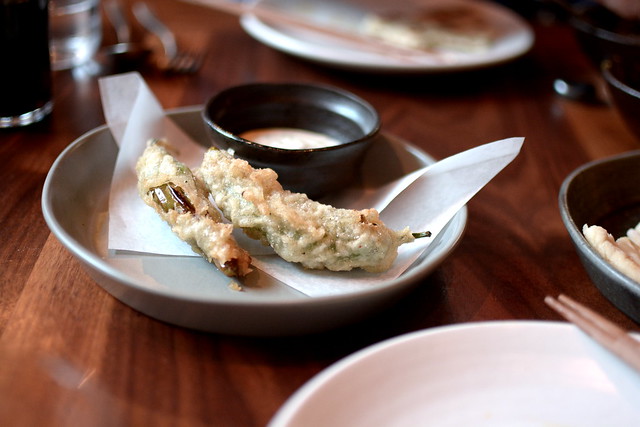 An order of “Stuffed Peppers” ($15) arrived courtesy of the kitchen. Inspired by Korean gochujun, the peppers were filled with Benton’s sack sausage, coated in a buttermilk batter, and pan-fried to a crisp. 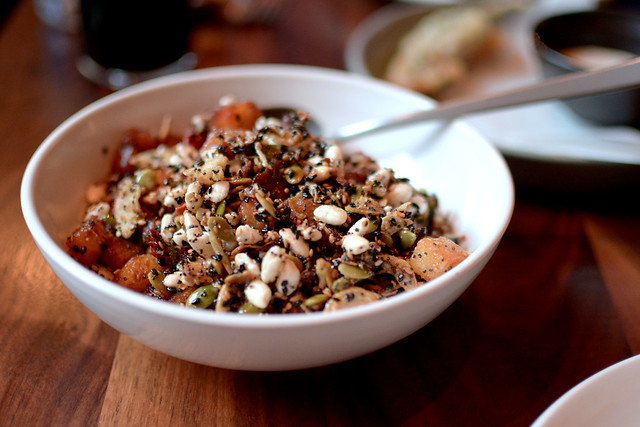 The “Fried Butterball Potatoes” ($10) came recommended by several friends who had dined here prior. Brimming with peanuts, dried chili pods, seeds, and puffed rice, the sweet and spicy mix reminded me a bit of Indian chaat. 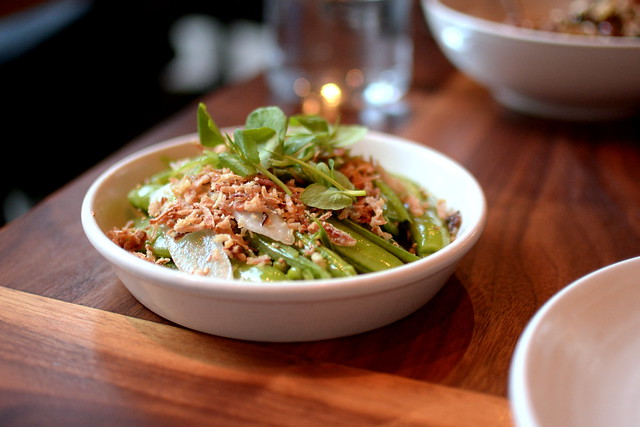 On the vegetable front, I gravitated toward the “Raw Sugar Snaps” ($10) with fresh horseradish, lemon, and shallot. The lingering burn from the horseradish was fantastic. 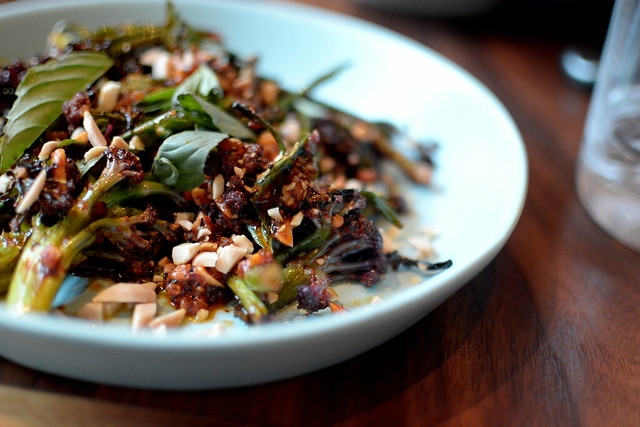 Since The Astronomer cares little for horseradish, he settled on the “Grilled Sprouting Cauliflower” ($13) with almond, chili, and Thai basil, which was more his speed. 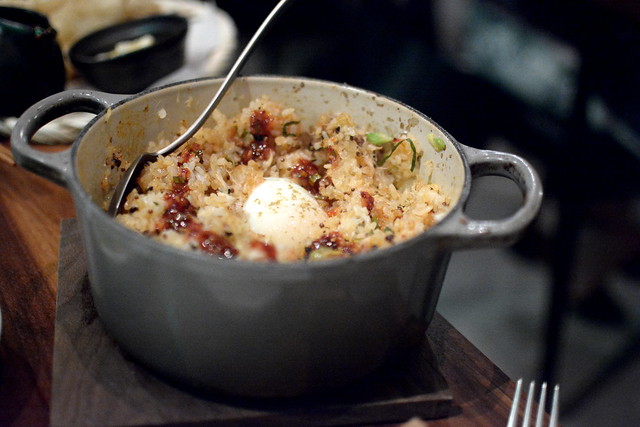 By the time the “Fried Skate Rice” ($38) arrived, The Astronomer and I had hit a wall. Meant to feed two to three, the serving was large enough for twice that many in my estimation. Even in our stuffed stupor, it was difficult to resist the fried rice dotted with crispy skate wing and fresh herbs and dressed with chili sauce and a runny egg. 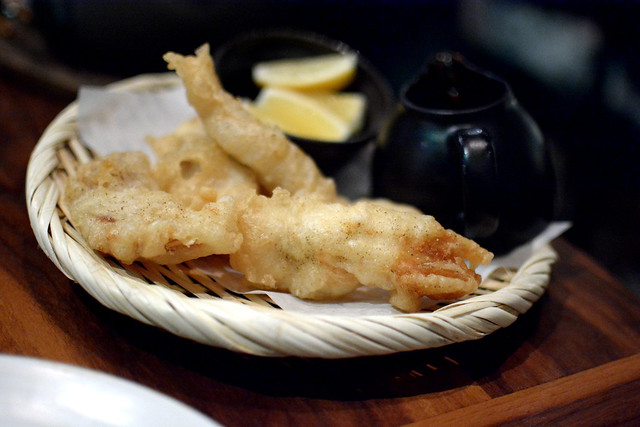 Served on the side were delicate fish sticks made from the remainder of the fish. A squeeze of fresh lemon juice was all that was needed here.

Dinner at Majordomo was very good. The food took delightfully unexpected turns at times and was solid overall, while the service was very much on point. Welcome to L.A., Dave.