On a recent Sunday afternoon, Diana and I met up for a late lunch at Joy in Highland Park. This newish spot on York Boulevard is the second restaurant from Vivian Ku of Silverlake’s Pine & Crane. Judging from the line snaking out the door and the happy faces gathering about, the restaurant is resonating well with the neighborhood. 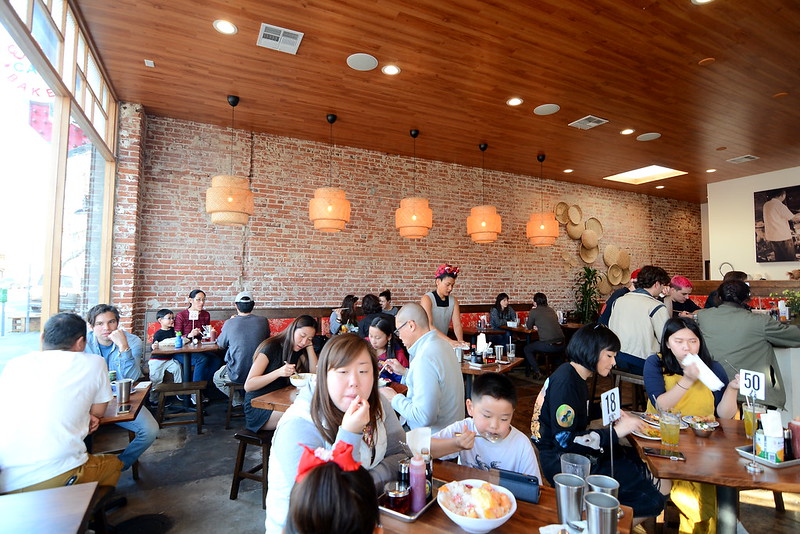 The long line of eager eaters moved impressively fast, and we were at the front before we knew it. After narrowing the field to four dishes, two teas, and a dessert, we settled into a table to await our order. Dishes hit the table not long after. The Spicy Shrimp Wontons ($6), delicate parcels swimming in chili oil, were straightforward and good. The Slack Season Noodles ($8), a noodle soup of sorts in a chicken and pork broth with minced pork, garlic, and shrimp, didn’t quite hit the mark. The noodles could have been bouncier, while the seasoning needed some oomph. Taiwanese cooking, which tends to favor more subtle-sweet flavors, admittedly can be lost on me. The Simple Greens ($4.50) lived up to their virtuous billing. The Thousand Layer Pancake ($6) was the strongest savory, with its crisp-flaky texture and cheesy filling. The addition of Thai basil and chili sauce, both of which are available upon request, took the pancake to the next level. Mmmm! To finish, Diana and I shared the Hakka Mochi ($6), which were served alongside mugs of warm tea and dusted in peanut and black sesame powder.  Speared with a bamboo toothpick and eaten one-by-one, the Hakka Mochi tasted like a sticky PayDay bar, while the tea was just bitter enough to counter its neighbor’s nutty sweetness.  The flavors and textures delighted until the sizable mound whittled into a mole hill and then disappeared all together.

Lunch at Joy was an absolute joy with its friendly vibes, buzzy dining room, and comforting cooking. A return visit with The Astronomer and June for plenty of pancakes and mounds of mochi is a must.