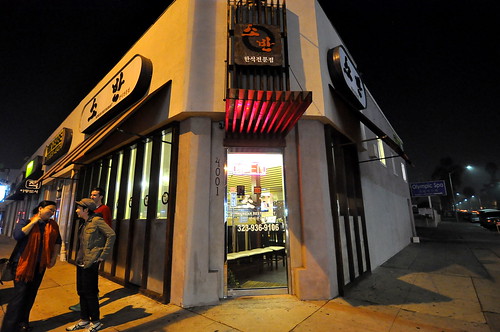 Best known for its bountiful banchan and ganjang gaejang (marinated raw crab), Soban has been on my list of Koreatown haunts to test drive for quite some time. The Astronomer and I, along with our friends Diep and Tien, finally came in for dinner a few weeks back. It was about time. 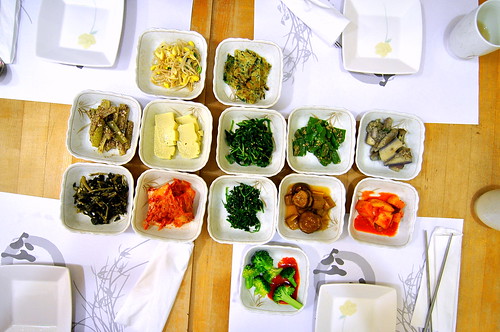 As soon as we made our selections from the plastic-bound menu, three dishes for four persons, a parade of banchan made its way to our table. While the spread was as plentiful as anticipated, the contents left a lot to be desired.

Mostly comprised of stalks, stems, and leafy greens, the banchan tasted muted somehow, missing the punchy flavors of fermentation and spice that I was really looking forward to. We didn’t request seconds of any of ’em, not even the pancake. For me, the best banchan in town has got to be at Mapo Kkak Doo Gee. 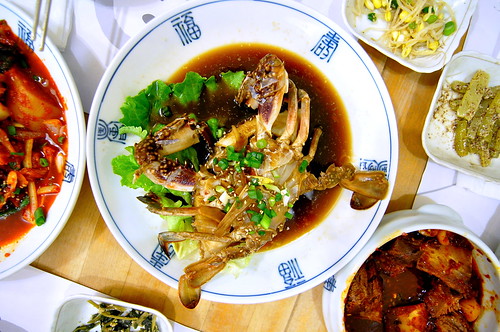 The whole raw crab marinated in herb-infused soy sauce arrived soon after. It smelled so strongly of the sea that this table full of seafood lovers was a little hesitant to dig in. Now, that is a first.

The crab’s jellied flesh was pretty awesome, but the marinade’s bitter tones and the crab’s questionable freshness kept all swoonage in check. Our table was crestfallen, to say the least. 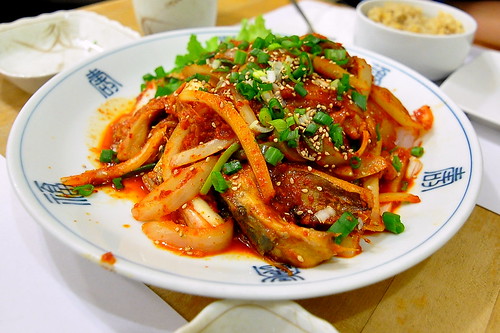 Swimming in red chilies, onions, and scallions, the meaty hunks of braised mackerel were fabulously spicy and pungent. Whereas the crab was “fishy” in a bad way, this dish was most definitely fishy in a great way. 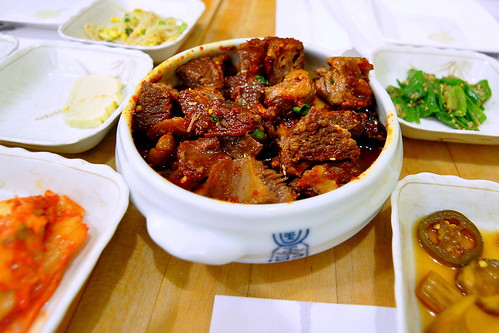 The highlight of the night was the galbi jjim, expertly seasoned and superbly tender braised short ribs imbued with soy sauce, ginger, and sesame oil. Sauced over mixed-grain rice, the short ribs were a delight!

While the banchan and raw crab didn’t hit the mark tonight, the duo of braised dishes that rounded out our meal surely did. Here’s to hoping our experience was an anomaly. It’d be damn shame if that weren’t the case.