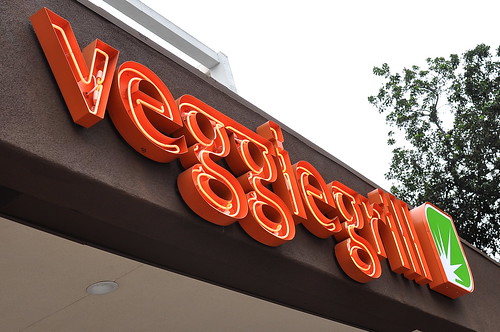 South Lake Avenue Appreciation Week wraps up today at VeggieGrill, a west coast chain serving meatless fare in a bright and airy fast-casual setting. My mom, who occasionally abstains from meat based on the Buddhist calendar, and I came in for a weekday lunch. 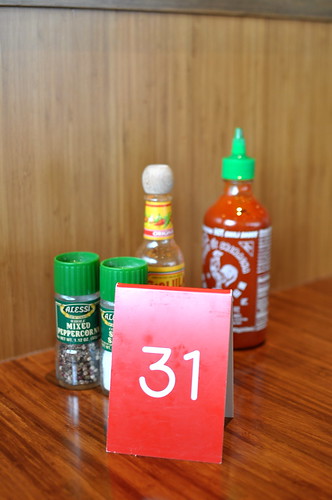 After placing our order at the front counter, we snagged a table and plopped down our number (and bums). I gathered a few condiments from near the drinks station just in case any additional seasoning was needed. Blandness is sadness. 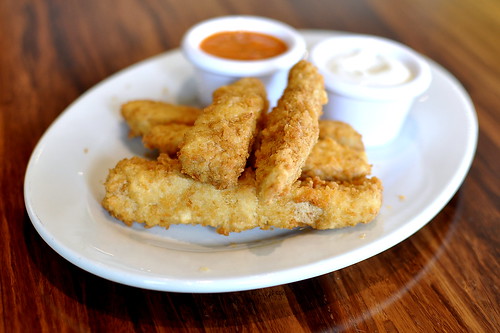 The first dish to arrive at the table was the “Chill Out Wings” ($6.95), battered and deep-fried wheat gluten served with house-made ranch and roasted pepper sauce. Both Mom and I were big fans of the crisp-golden seitan rods. She dipped hers in ranch dressing, while the roasted red pepper sauce was more my speed. 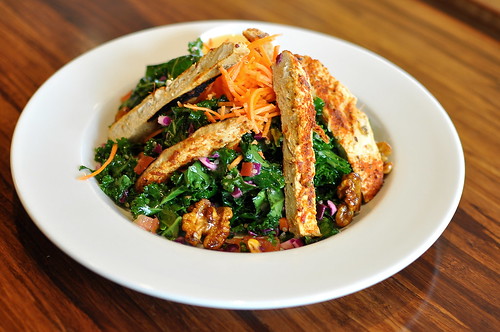 For my main course, I ordered VeggieGrill’s signature “All Hail Kale™” salad ($9.25), a healthful collection of marinated kale, quinoa, red cabbage slaw, corn salsa, and agave-roasted walnuts in a ginger-papaya vinaigrette. I added Blackened Chickin’ ($2.85) to bulk it up a bit, if you know what I mean.

While I quite enjoyed my bowl of well seasoned and composed greens, I felt a wee bit hungry upon completion. Salad-based meals are admittedly tough for this carbohydrate fiend. Perhaps an additional appetizer will be in order next time. Or maybe dessert. 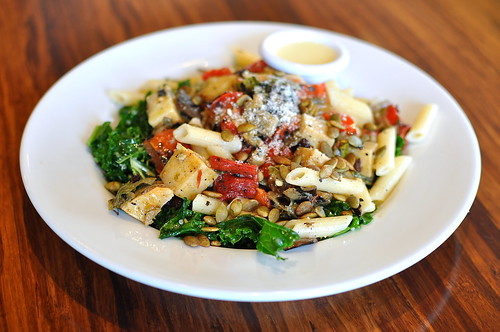 Even though I left the restaurant a teensy bit hungry, I still enjoyed my meatless meal at VeggieGrill. Mom had a good time too. In fact, she returned this past week for more “wings” and some asparagus.