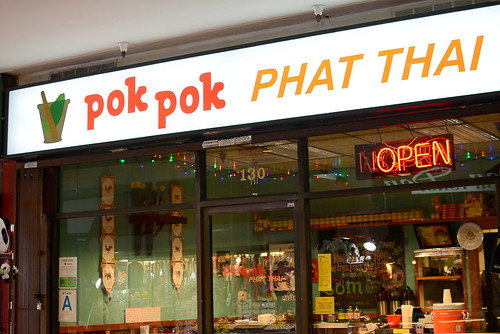 The arrival of Pok Pok Phat Thai was a mixed bag for me. As a Thai food lover, I was thrilled to have superb regional noodles available a stone’s throw from home. The only downside was that the restaurant took the space formerly occupied by Hoan Kiem, a Northern Vietnamese spot that served terrific banh cuon and pho ga. Alas, that’s how the cookie crumbles sometimes. 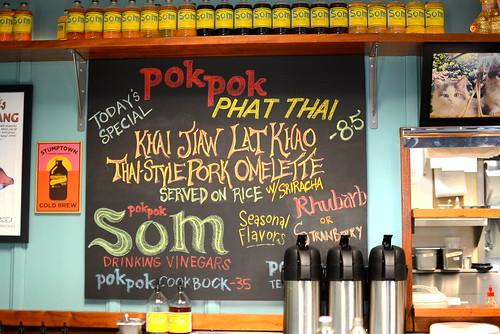 Phat Thai is the first of two Pok Pok concepts that Chef Andy Ricker is bringing to L.A. His full-service Pok Pok, which I was a fan of when I visited it in Portland, should be arriving before year’s end.

Phat Thai’s menu is succinct, and service is efficient. After ordering at the counter and grabbing a seat at the communal picnic table out front, we received our food within five minutes or so. Fast service makes for happy parents, always. 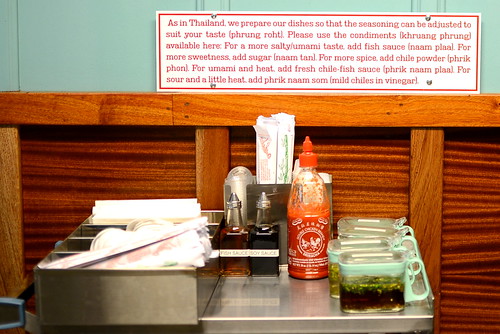 I had heard (and read) that careful application of condiments is key to a great Pok Pok experience. Otherwise, the food can taste bland. This cart full of fish sauce, sugar, and vinegar was on hand to season our dishes to taste. The chili-spiked fish sauce and fresh lime juice were essential for Pok Pok perfection for The Astronomer and me. 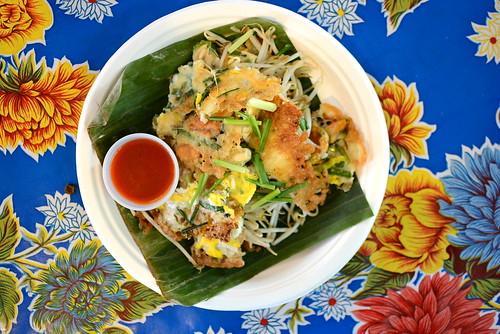 First up was the Hoi Thawt ($9), a “crispy broken crepe with steamed fresh mussels, eggs, garlic chives and bean sprouts, served with Thai sriracha sauce.” This is a Thai street vendor’s specialty, according to the menu.

If there’s one thing you need to know about me, it is that I loathe bean sprouts. However, the Hoi Thawt was so tasty that I didn’t even mind the sprouts’ muddy flavors here. 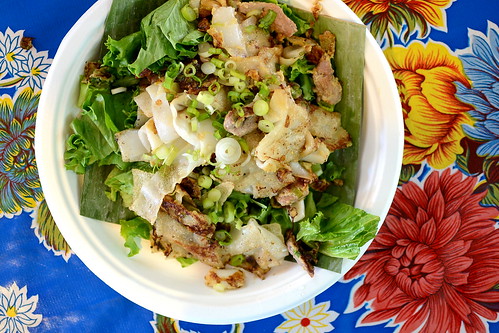 My favorite dish of the day was the Kuaytiaw Khua Kai, wide rice noodles stir-fried to crispy and caramelized greatness in rendered pork fat with duck, cuttlefish, egg and green onions ($12). This is a Bangkok Chinatown specialty, according to the menu. 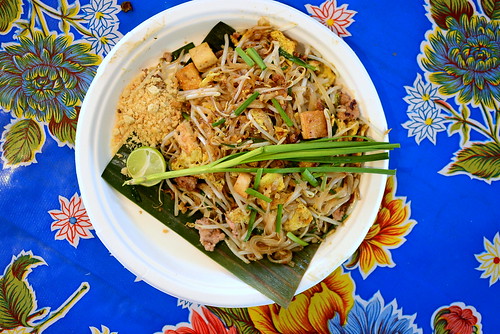 The noodles were quite delicious, but in my heart of hearts, I will always favor the American-style, sticky sweet pad Thai that I grew up with over the more “authentic” preparations. Still, we finished every last strand.