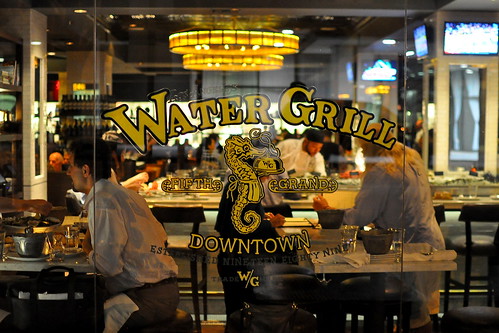 I never had any desire to dine at downtown’s Water Grill until recently, when the restaurant underwent a massive renovation and thoughtful rebranding. Fine dining can be a lovely sport, but here in Los Angeles I tend to gravitate toward inexpensive ethnic food, with a sprinkling of trendy hot spots, rather than white table clothed rooms.

After several months of closure and 1.5 million dollars in investments, the former bastion of fine dining has been transformed into a lively urban seafood shack, complete with an open kitchen and a gorgeous marble bar. The prices are still quite hefty, but the vibe is definitely more upbeat and the menu more approachable. 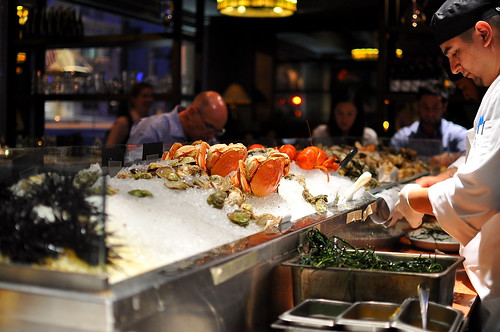 Curious to check out the new Water Grill, I grabbed my friend and fellow downtown worker bee Darin for a post-work bite. We snagged two seats at the bar with stellar views of oysters being shucked and seafood towers being built. The restaurant was roaring on a Tuesday night. 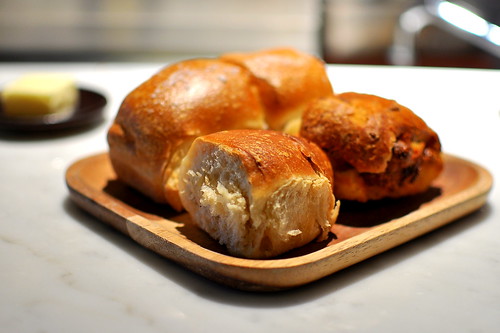 Our waiter brought over warm bread with butter as we glanced over the menus. Both the coarse salt-topped sourdough and the caramelized onion and cheese rolls were terrific. The butter, though gratuitous, was welcomed with each bite. 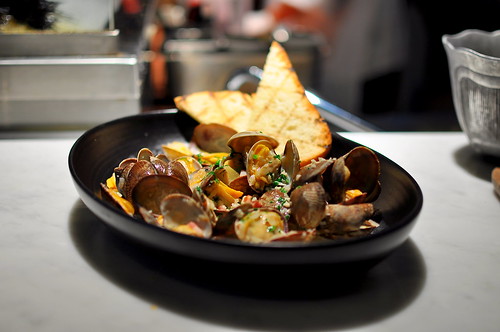 To start, Darin and I shared the “Steamed Whidbey Island Manila Clams” ($16), which came bathing in a broth of vermouth and white wine with a touch of cream. Garlic, parsley, and bacon added some punch to the brew.

While most bowls of steamed clams tend to have a few clunkers that fail to open, this serving was batting an impressive 1.000. The only element of the dish that I disliked was the shallow bowl it was served in, which made sponging up the flavorful broth with toasted bread nearly impossible. 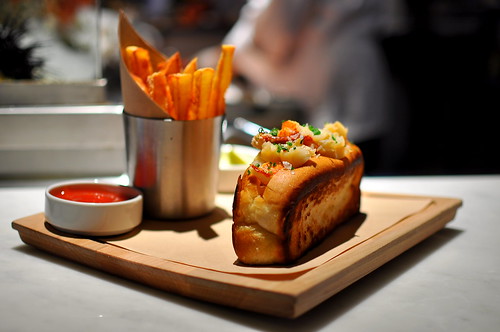 For my main course, I chose the New England Lobster Roll ($32) prepared Connecticut-style. It came served with French fries, ketchup, and a dish of pickles. 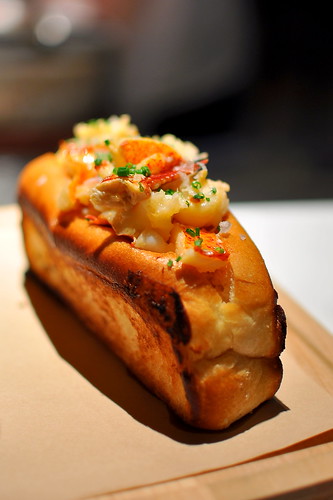 Generously buttered hunks of lobster came neatly crammed into a toasted split-top bun with flecks of chives and sea salt garnished on top. It was quite a sight to behold and tasted about as good as it looked. Had the pieces of lobster meat been a touch larger, the roll would’ve been an ideal specimen and completely worth its price tag. 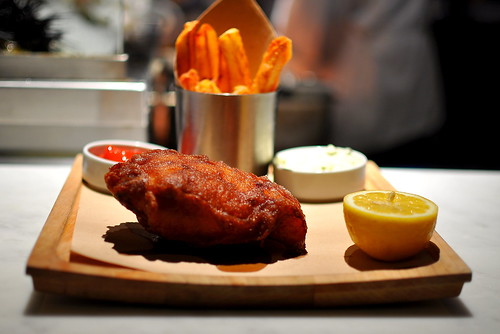 Darin’s “Wild Atlantic True Cod Fish and Chips” ($28), which was served with a house-made tartar sauce, half a lemon, fries, and ketchup, left him wanting for the most part. 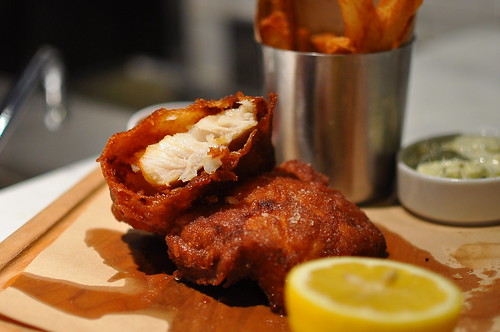 The batter, while pleasantly crisp, was tongue-curlingly salty. To add insult to injury, the filet couldn’t stand up to the coating and became a crumbly mess as a result.  As we were walking out of the restaurant, Darin wistfully wished that he had ordered a more delicate fish preparation.

Though the fish and chips were less than perfect, we still had a most satisfactory dinner at the rebranded Water Grill. Thirty-two dollar lobster rolls can’t be an everyday indulgence, but I wouldn’t be against returning to Fifth and Grand to quell a craving once every few months. Next time around, I’m getting a seafood tower too.