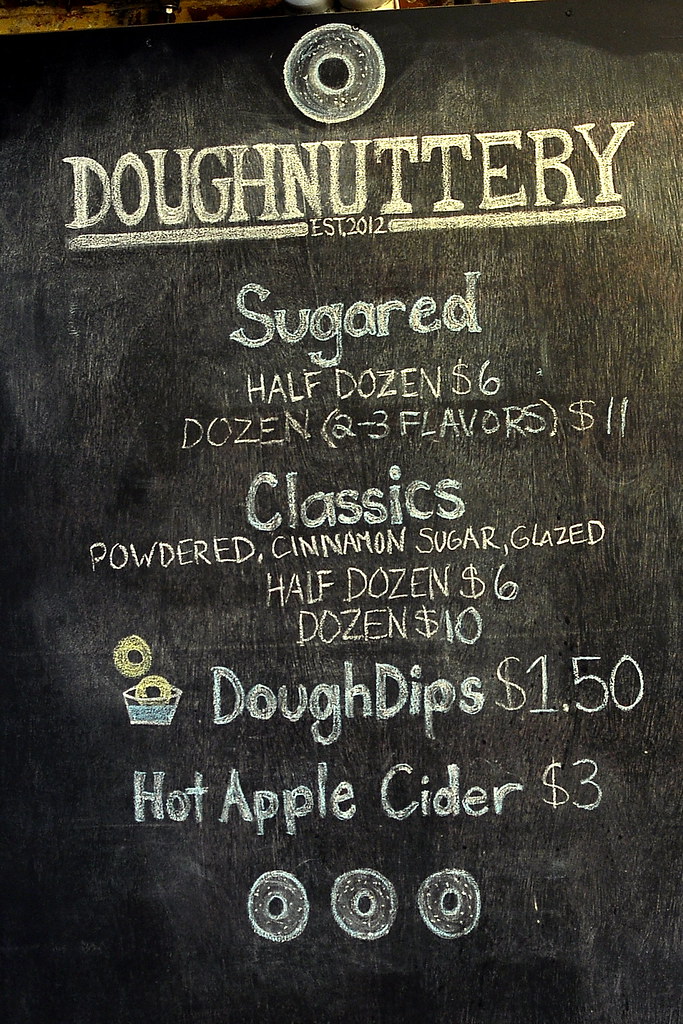 The Astronomer and I devoured a platter of street meat at the corner of 53rd and 6th the moment we arrived on Manhattan soil this past December. It was well past midnight and well below forty degrees at the time, but one forkful of the chopped lamb smothered in white sauce and none of that seemed to matter. Plus, the less-than-ideal conditions made for no lines and instant gratification.

We followed up our late-night snack with a good night’s sleep and awakened the next morning ready to explore and feast some more. After meeting up with my sister-in-law Sonia and strolling along The High Line, we made our way to Chelsea Market for breakfast at the Doughnuttery. I was alerted to the existence of the Doughnuttery by a press release that serendipitously landed in my inbox a few days before the trip. The stall, which debuted in early December, is a collaboration between pastry chef Katie Rosenhouse and her business partner Evan Feldman.

While the Doughnuttery’s batter and flavored sugars are original creations, the deep-frying setup is fairly commonplace. I encountered identical machinery at Seattle’s Street Donuts back in 2011, as well as at my office building’s holiday party last year. Still, it was pretty mesmerizing watching the tiny O’s being made. Here, doughnuts are sold by the half-dozen or dozen and are fried-to-order in trans-fat free shortening. There are over a dozen flavor possibilities including “PBCP” (peanut butter, cayenne, and pretzel), “Paris Time” (lavender, pistachio, and vanilla sugar), and “Cacaoboy” (cacao nibs, mesquite and black sugar). “Dough Dips” include pumpkin beer caramel, toffee sauce, and raspberry balsamic. Upon being removed from the fryer, the doughnuts were transferred to a paper bag and sprinkled with our flavors of choice. We selected “Mulled Apple Cider” and “Speckled Strawberry.” The paper bag was given a vigorous shake to evenly distribute the flavor crystals. Each doughnut emerged from the bag hot, crisp, and true-enough to its stated flavor. The tangy and sour notes found in both the “Mulled Apple Cider” and “Speckled Strawberry” were a fun surprise.

While the Doughnuttery’s bite-sized rings were certainly festive things, they’re not an essential doughnut experience for visitors like the plush specimens found at Dough in Brooklyn and Doughnut Plant in Manhattan. Additionally, the doughnuts were way overpriced even by New York standards at $1 per piece. Still, if I happen to be in the neighborhood, I’ll never say no to deep-fried dough.