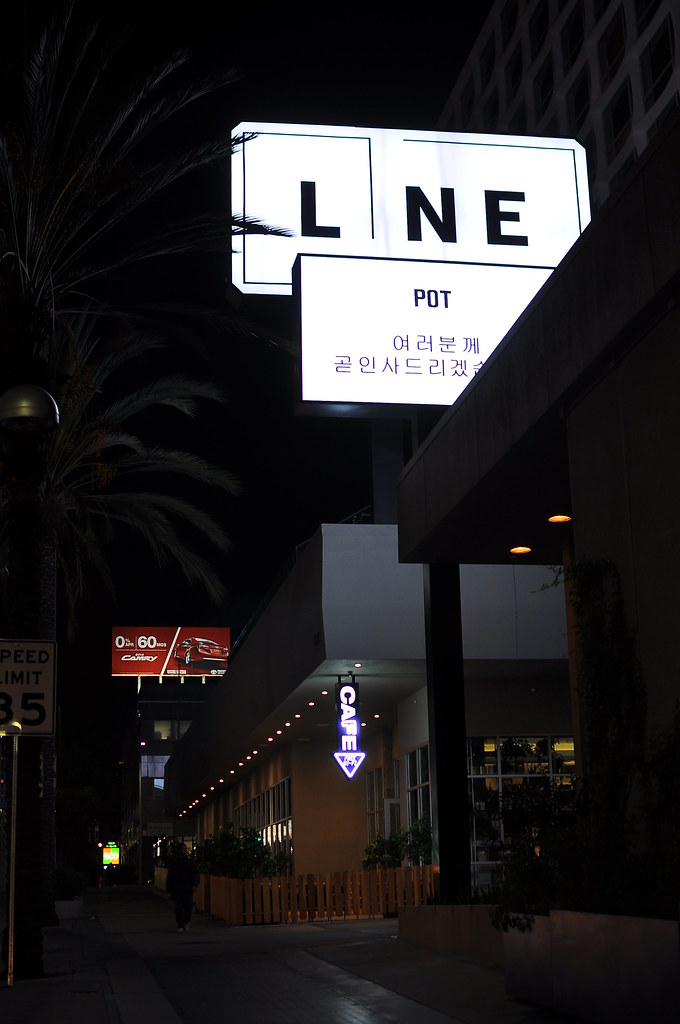 POT is addictive. After my first hit last Tuesday night, I was jonesing for more this past weekend. Two visits in less than the span of a week, and the restaurant isn’t even officially open yet! Like I said, POT is addictive. 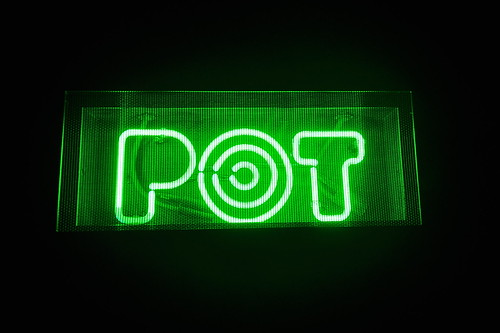 Tucked inside The Line Hotel in Koreatown, POT is the latest, greatest restaurant from Chef Roy Choi.

After years of innovating bold flavor mash-ups aboard the Kogi Truck and at Chego, A-Frame, and Sunny Spot, Roy is drawing upon the traditional dishes that he grew up eating at home, as well as at his parents’ now-closed restaurant Silver Garden, at POT.

Koreatown and Korean food through the eyes of an American with Korean blood. 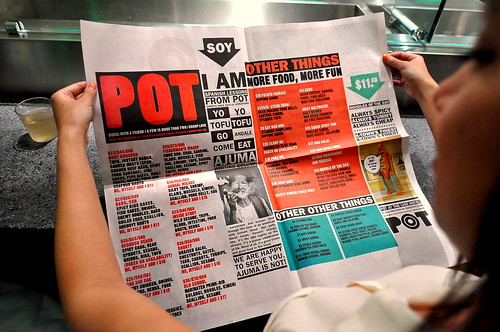 Printed on tabloid-size newspaper, the menu here is spectacular both in form and function. There are plenty of signature hotpots, of course, as well “Other Things” and “Other Other Things” to round out a proper K-Town feast. Come here with a crowd that likes to share and doesn’t mind a whole lot of double dipping. 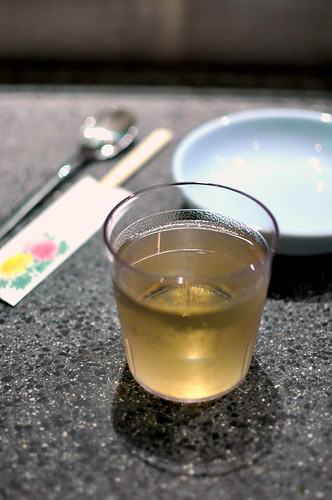 Chilled glasses of “POT water” (barley tea) were on hand to hydrate and quell fiery mouths throughout dinner. 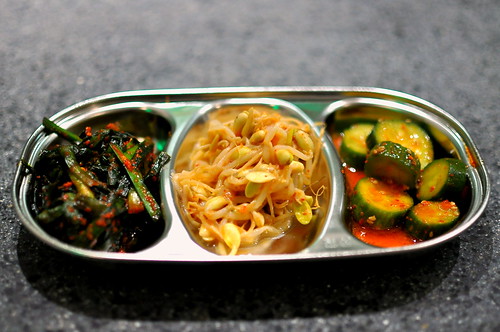 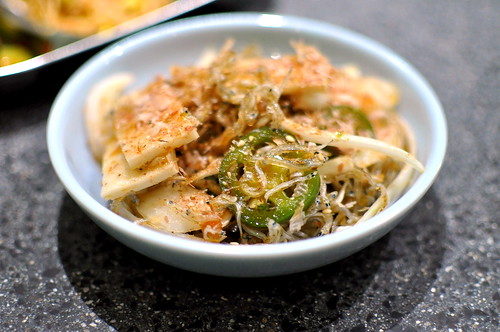 We ordered an additional banchan with baby anchovy, fish cakes, and jalapeno ($3) from the “Other Other Things” section of the menu. It was superbly savory. 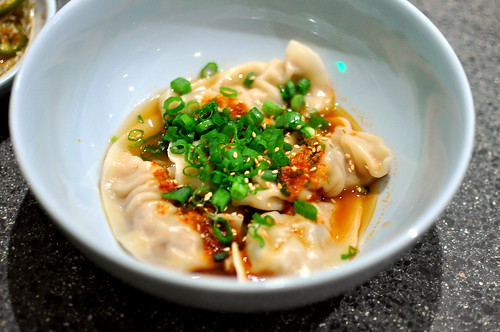 And then there were really fabulous dumplings. Served four to an order, these delicate parcels, known as “Kat Man Doo” ($9), came stuffed with tofu, pork, beef, and ginger and arrived lightly dressed in a chili vinegar sauce. Pro tip: Eat these with a spoon because chopsticks are too gruff for these tender mandoo. 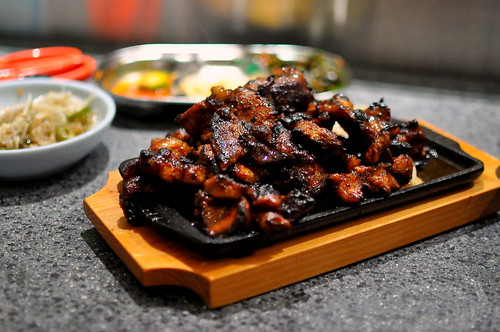 The BBQ Spicy Pork ($12) came highly recommended by our waiter and for damn good reason—it was tremendously tasty. Juicy, charred, and intensely marinated, the pork totally hit the mark. Eat this one with plenty of steamed rice. 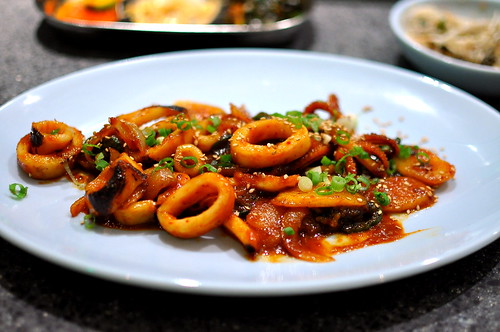 I was all about the “Spicy Squid Yum” ($12), a collection of grilled rings and tentacles, as well as rice cakes and jalapenos, lovingly slathered in a not-too-sugary and not-too-spicy gochujang sauce. Baby bear! 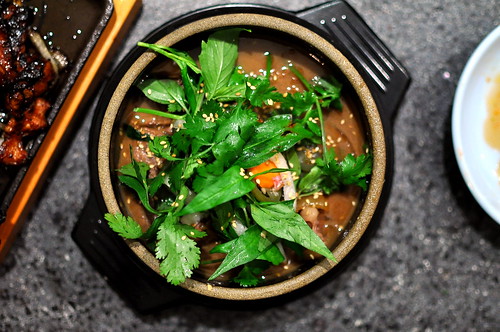 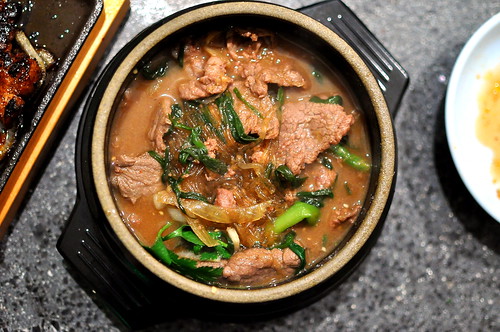 To round out our spectacular spread, Nastassia and I shared two individually portioned hotpots. The Old School ($17) with marinated prime rib, bulgogi, noodles, kimchi, scallion, and sesame was rich and hearty. Every last bit of the broth begged to be slurped. 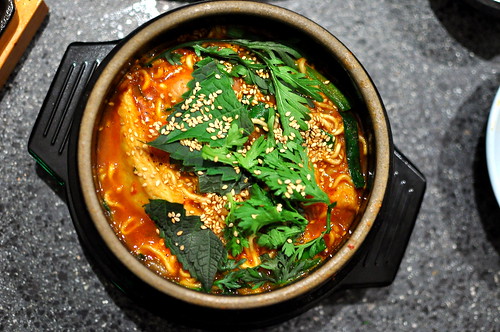 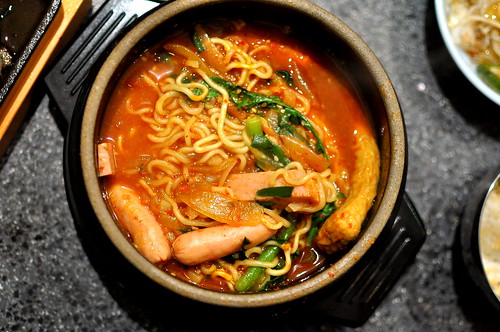 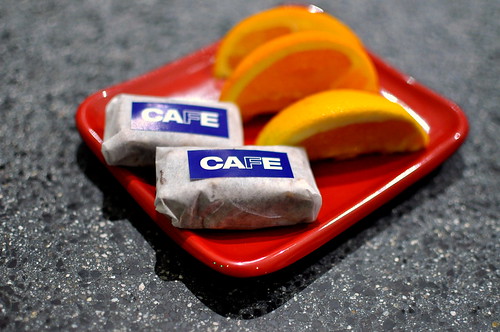 To finish, a sweet and salty Ritz candy bar from the caFe (here’s what it looked like unwrapped) and orange slices, too. 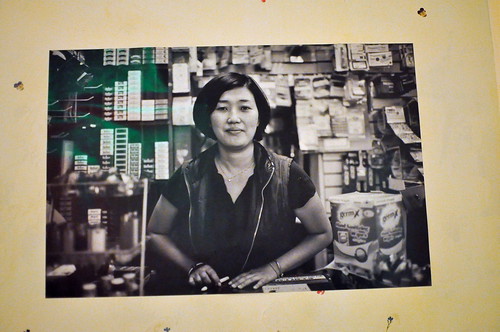 I loved POT’s flavors and energy so much during the friends and family preview that I returned a few days later while the restaurant was still in its soft-opening phase. I have a feeling that this place is going to be slammed once it officially opens on the 25th, so I figured it was best to cram in as much POT as possible before lines begin snaking out the door! 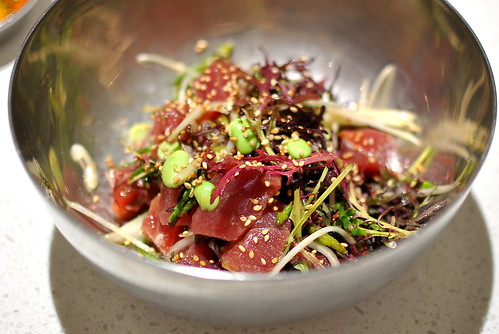 Tsz and I came in for a late Sunday lunch and ordered three dishes to share. The “Poke Me” ($15), a riff off Hawaiian poke, came with gorgeous cubes of Yellowfin tuna, edamame, sea beans, Maui onions, and smoked sesame in a shoyu vinaigrette. Bright and refreshing, the poke was terrific. 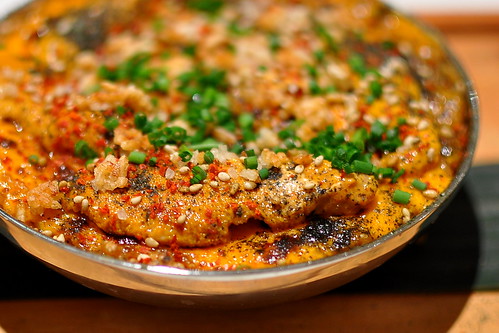 We also fell hard for the “Beep Beep” ($18), a decadent melange of sea urchin, yuzukosho, and Kewpie mayonnaise served over rice. The yuzu’s tang and spice played off the richness of the uni and mayonnaise with aplomb. 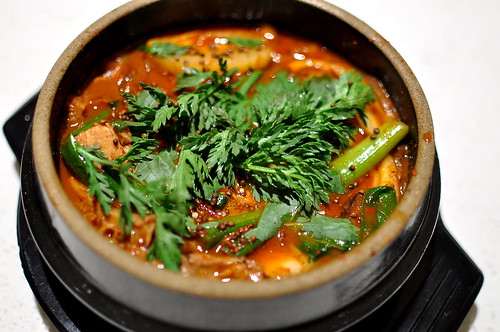 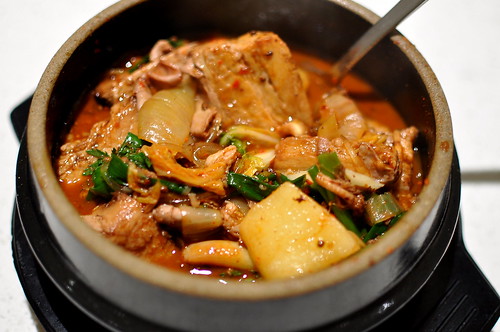 And finally, the “Inside Story” ($10)—an awfully delightful hotpot filled with offal (tripe and intestine), wild sesame, blood, and herbs in a deep pork broth. 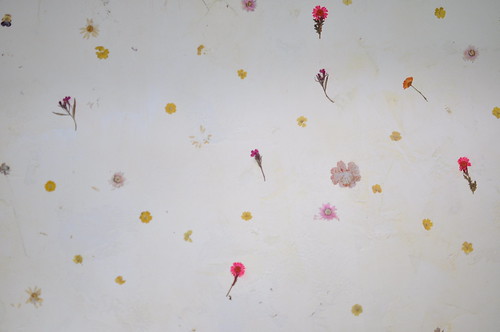 Whether you’re new to Korean cooking or have loved it forever, POT is the spot. The cooking is seriously impressive, while the space and vibe feel laid back, fun, and just right. I hope you’ll love POT as much as I do. But be careful, it’s addictive.

It’s settled. I’m investing in a second home in Koreatown: