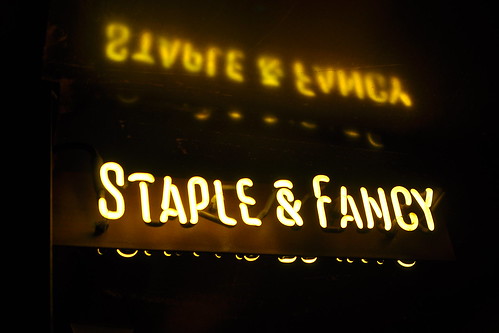 After happy houring at Bathtub Gin and gastropubbing at Essex, The Astronomer and I jammed over to Staple & Fancy Mercantile for a late-night feast. We were joined at dinner by Lang, a native Seattleite and one of my best friends from college.

While I’ve eaten at quite a few of Chef Tom Douglas’ restaurants over the years, I have thus far ignored Seattle’s other dining darling: Chef Ethan Stowell. A self-trained cook and Food & Wine magazine’s “Best New Chef” (2008), Chef Stowell, along with his wife Angela, own and operate Tavolata, How to Cook a Wolf, Bar Cotto, and Rione VIII in the area. 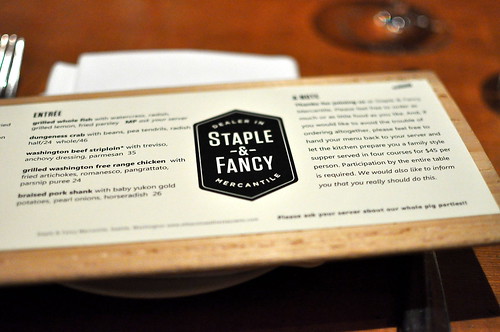 Staple & Fancy’s Italian-inspired menu is comprised of “staple” items, including appetizers, pastas, sides, and proteins, as well as a “fancy” family-style supper served in four courses ($45 per person). The fancier option is highly encouraged. In fact, the menu nudges not so subtly, “We would like to inform you that you really should do this.” 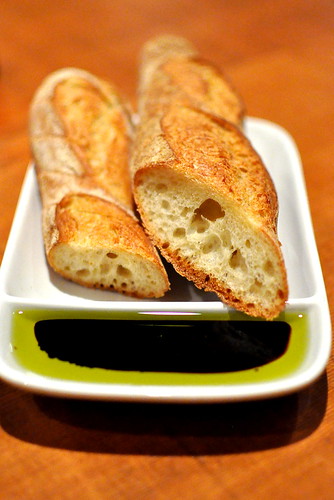 Since this was technically our second dinner of the evening, The Astronomer and I left the “staple” or “fancy” decision up to Lang. He chose the latter and thus, the fate of our stomachs was chosen. Dinner started with a loaf of crusty bread served with good olive oil and vinegar. Classic. 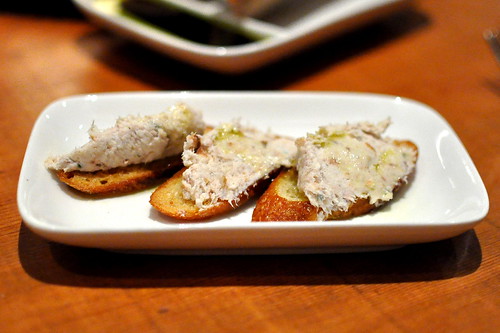 Next to arrive was a veritable cornucopia of light, thoughtful, and thoroughly delightful bites, including smoked fish crostini drizzled with olive oil… 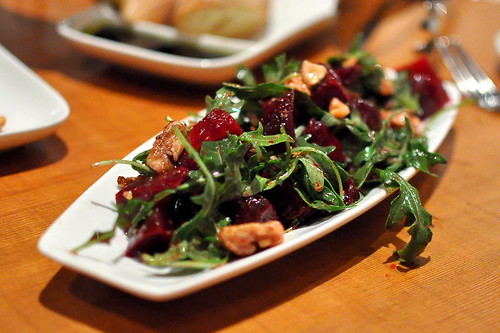 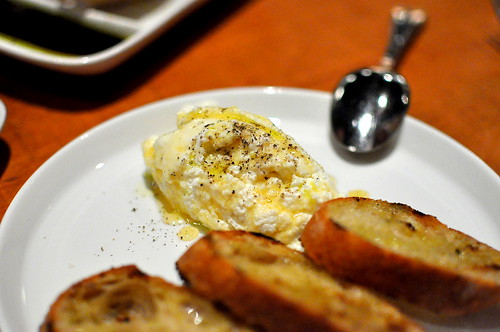 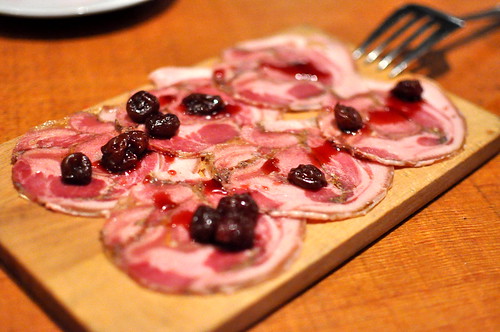 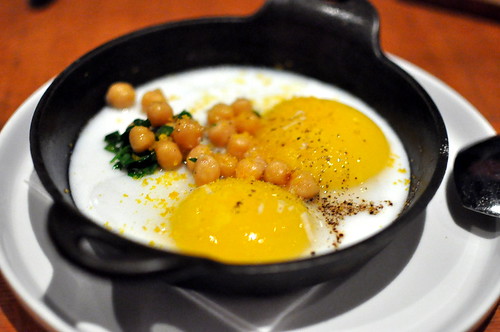 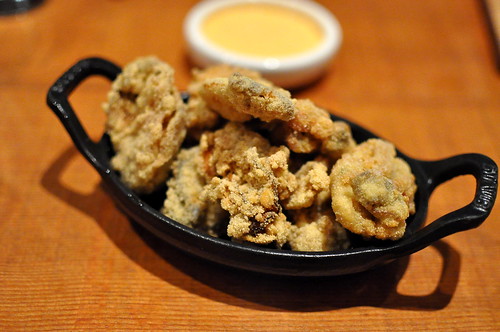 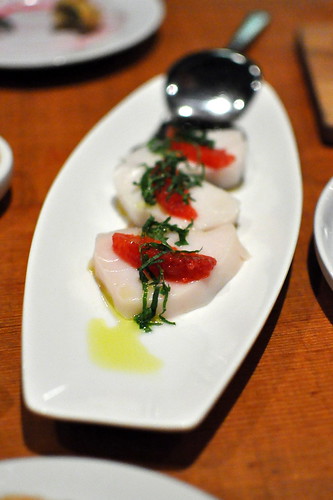 The parade of starters hijacked our entire table, leaving us feeling overwhelmed and stoked simultaneously. I couldn’t have been happier sipping on a glass of chilled Prosecco, diving into platters of headcheese and fried oysters, and catching up with my old friend. 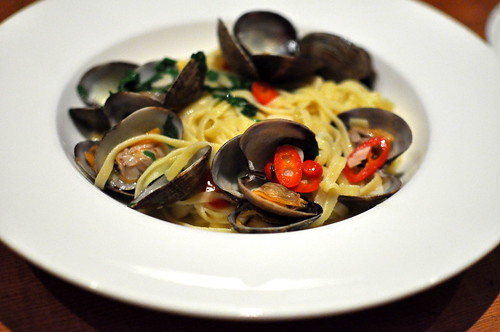 For the pasta portion of our meal, we twirled our forks into a huge serving of tagliarini with Manila clams and Fresno chilies. A simple and satisfying preparation. 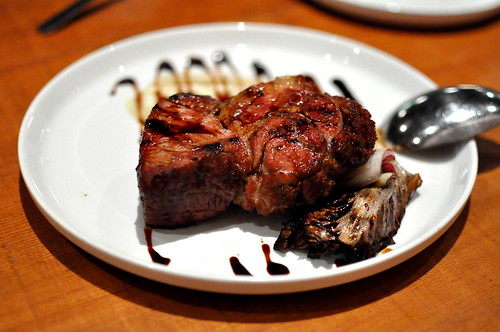 And then came the proteins. From the land was a brined and grilled Carlton Farms pork chuck loin served over a smoked onion puree with grilled treviso (like radicchio) and a balsamic reduction. Beautifully caramelized, fork-tender, and moist for miles, this loin had it going on. 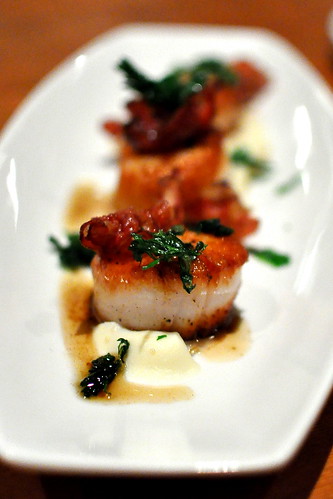 From the sea were exquisitely seared scallops perched in a pool of celery root puree and topped with crisped guanciale. 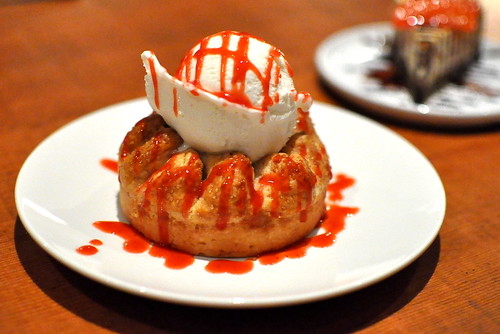 Everyone at the table was just about ready to burst by the time dessert rolled around, but somehow we managed to polish off the rhubarb crostata with marscapone gelato and strawberry sauce… 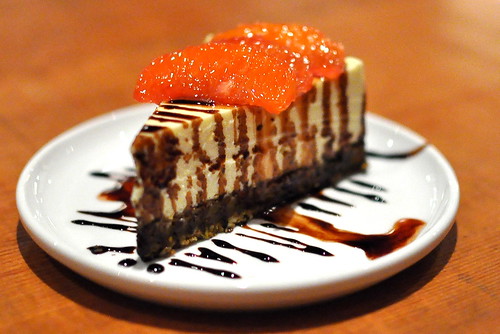 …as well as the ricotta cheesecake with Cara Cara oranges and a balsamic reduction. The slight hit of acidity from the vinegar really made this sweet pop. 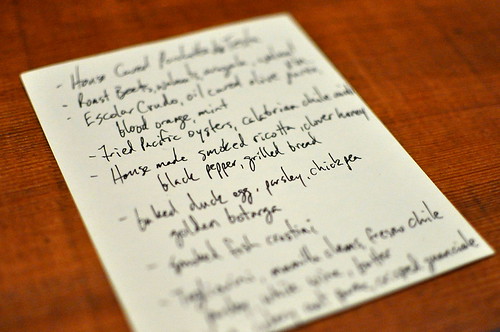 Fancy. Feast. Fitting for our last night in town.

P.S. Thank you to our awesome server, whose name I forgot to jot down, for making me a list of every single dish we were served this evening. Southern hospitality ain’t got nothin’ on Pacific Northwestern hospitality. Truth.

There’s way more to eat in Seattle on Gastronomy: