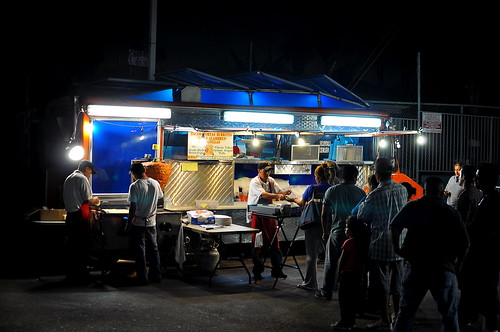 When the sun sets over Los Angeles, the taqueros come out in full force from all corners of the city. The 76 gas station on the corner of Venice and La Brea in Mid-City plays host to the city’s finest al pastor operation, literally “shepherd-style” tacos prepared on a trompo (rotating spit), which was influenced by Lebanese immigrants in Mexico. 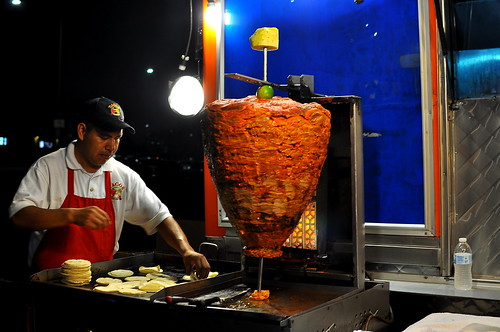 There’s almost always a line snaking through the parking lot, but Leo’s crew never breaks a sweat. Service is prompt and efficient, so you’ll get your taco in a timely fashion. 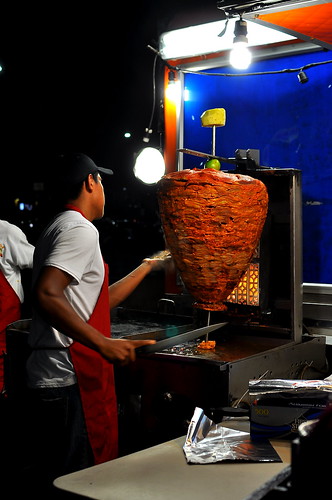 The pork, colored a fetching shade of red from dried red chilies and achiote paste (a blend of annatto, oregano, cumin, clove, cinnamon, black pepper, allspice, garlic, and salt), is loaded onto the trompo with precision and left to roast until perfectly tender and glossy.

As orders roll in, the cashier scribbles tickets for the taquero, who lops off the perfect porky portion straight into a griddled corn tortilla with a few swift flicks of his wrist. 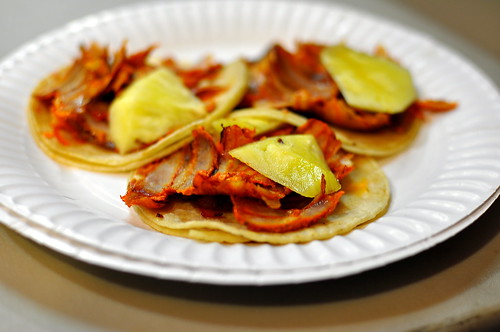 Tacos, priced at $1 a piece, are topped with a sliver of roasted pineapple and are ready to be dressed at the condiments bar with chili-laced salsa roja, tomatillo-tinged salsa verde, loose guacamole, onions, cilantro, radishes, and pickled vegetables. Really though, the al pastor needs no accompaniments—it’s strong enough to stand alone.

Tacos Leo operates Monday through Thursday from 5 p.m. to 3 a.m., and until 4 a.m. on Fridays and Saturdays.

More “Meals on Wheels” on Gastronomy: